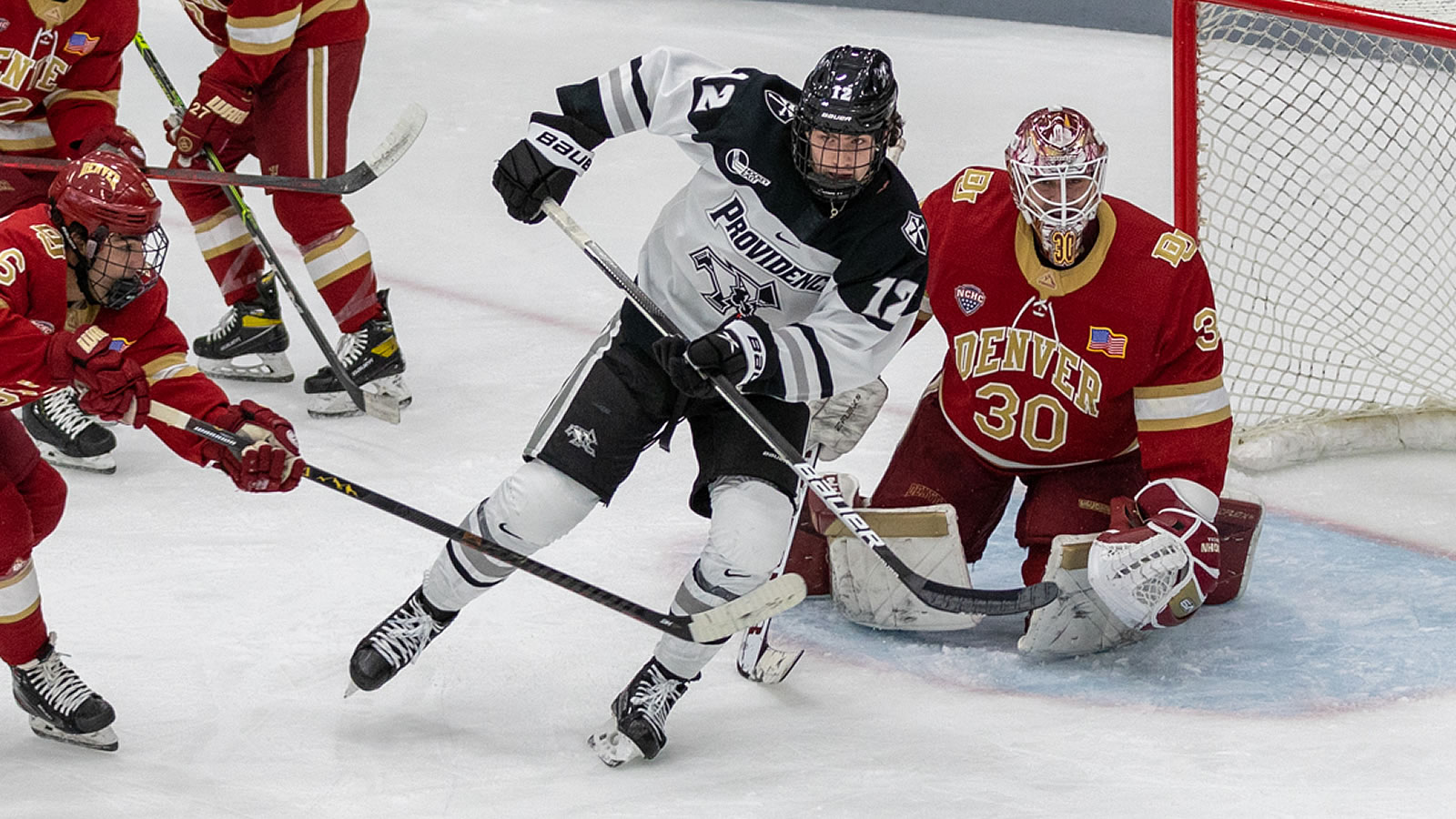 Providence completed one of the most exciting comebacks in recent memory on Friday, scoring five goals in the third period to topple previously undefeated Denver, 6-5, at Schneider Arena. The Friars offense was powered by a final-frame hat trick from Nick Poisson, who also assisted on another tally in the third. Providence followed up the victory with a 2-0 road win in league play at New Hampshire on Sunday, moving to 2-0-0 in Hockey East games.

Boston University and Merrimack split a high-scoring home-and-home series that saw multiple hat tricks in Saturdayâs wild affair. On Friday, the Warriors earned their first ranked win of the season, 3-2, and it marked the first time theyâve knocked off Boston University at Lawler Rink since Oct. 20, 2018. On Saturday, BU sophomore Dylan Peterson tallied his first career hat trick, including an unassisted shorthanded goal, in the Terriersâ 8-6 win. The Terriers jumped out to a 5-1 lead before Zach Vinnell netted the first hat trick by a Warrior defenseman since New Yearâs Day 2011, fueling a rapid comeback that fell just short in an 8-6 setback.

Boston College rebounded from a 5-3 setback to Colorado College to defeat Denver, 5-1, on Saturday. Jack McBain racked up four points on a goal and three assists and now leads Hockey East in overall scoring with nine assists and 11 points. He had two points in each outing and has four multi-point games in six games played this season.

UMass Lowell went undefeated against Michigan State, earning a Friday stalemate after Brehdan Engum scored the game-tying goal with 38 sec- onds left in regulation. The River Hawks took a 4-0 win the next night as Henry Welsch registered 27 saves to shutout the Spartans.

Nick Poisson (So., F; Vancouver, B.C.) recorded a hat trick and an assist, all in the third period, during Providenceâs 6-5 come-from-behind victory over previously undefeated #8 Denver on Friday night. Poisson currently ranks second in Hockey East in scoring, along with teammate Brett Berard, with 10 points (3g, 7a) 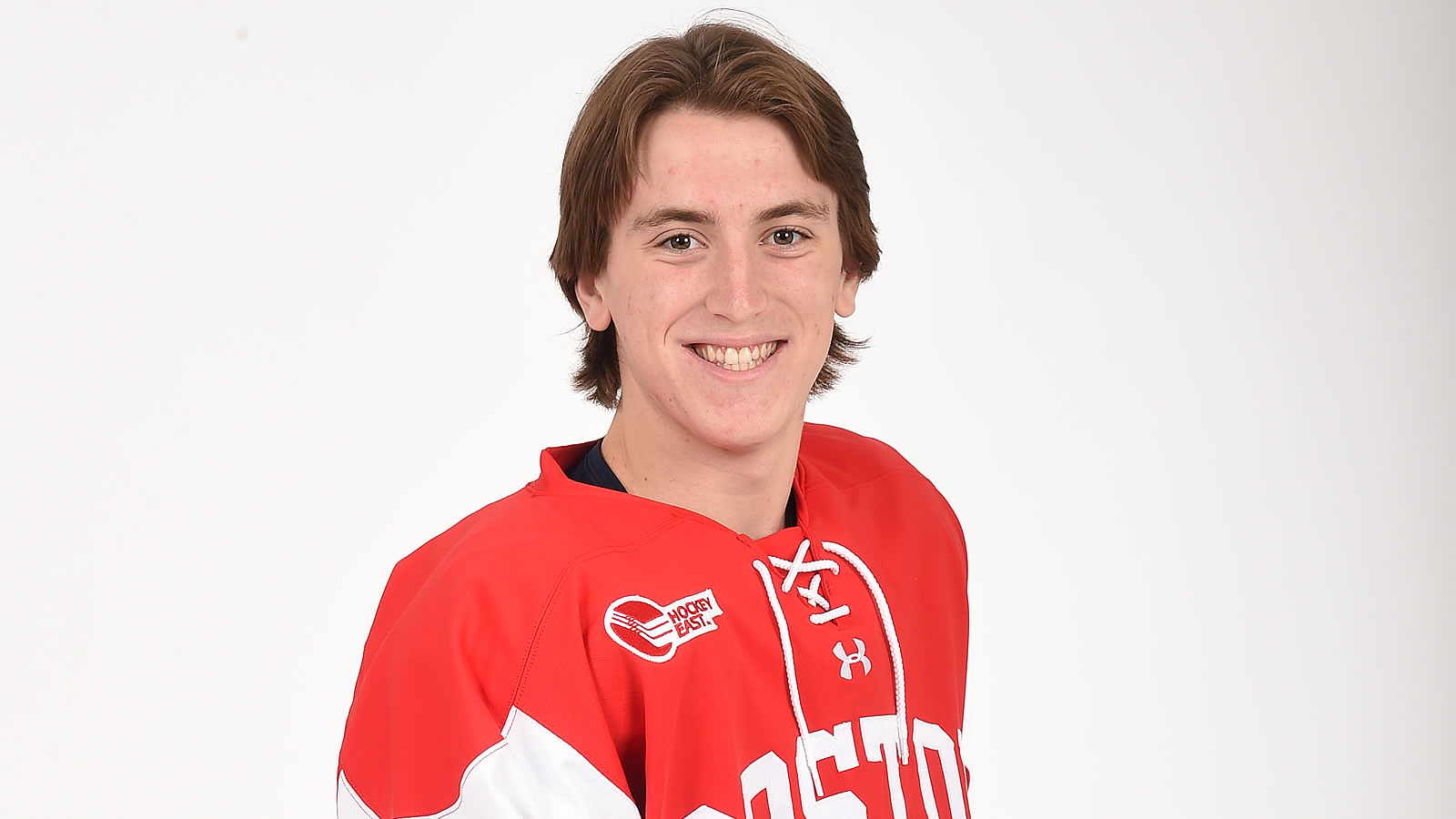 Ty Gallagher (Fr., D; Clarkston, Mich.) collected a career-best three assists in the Terriersâ 8-6 win over Merrimack. He had the only assist on classmate Brian Carrabesâ eventual game-winner. Gallagher finished the weekend as a plus-four and also blocked two shots. 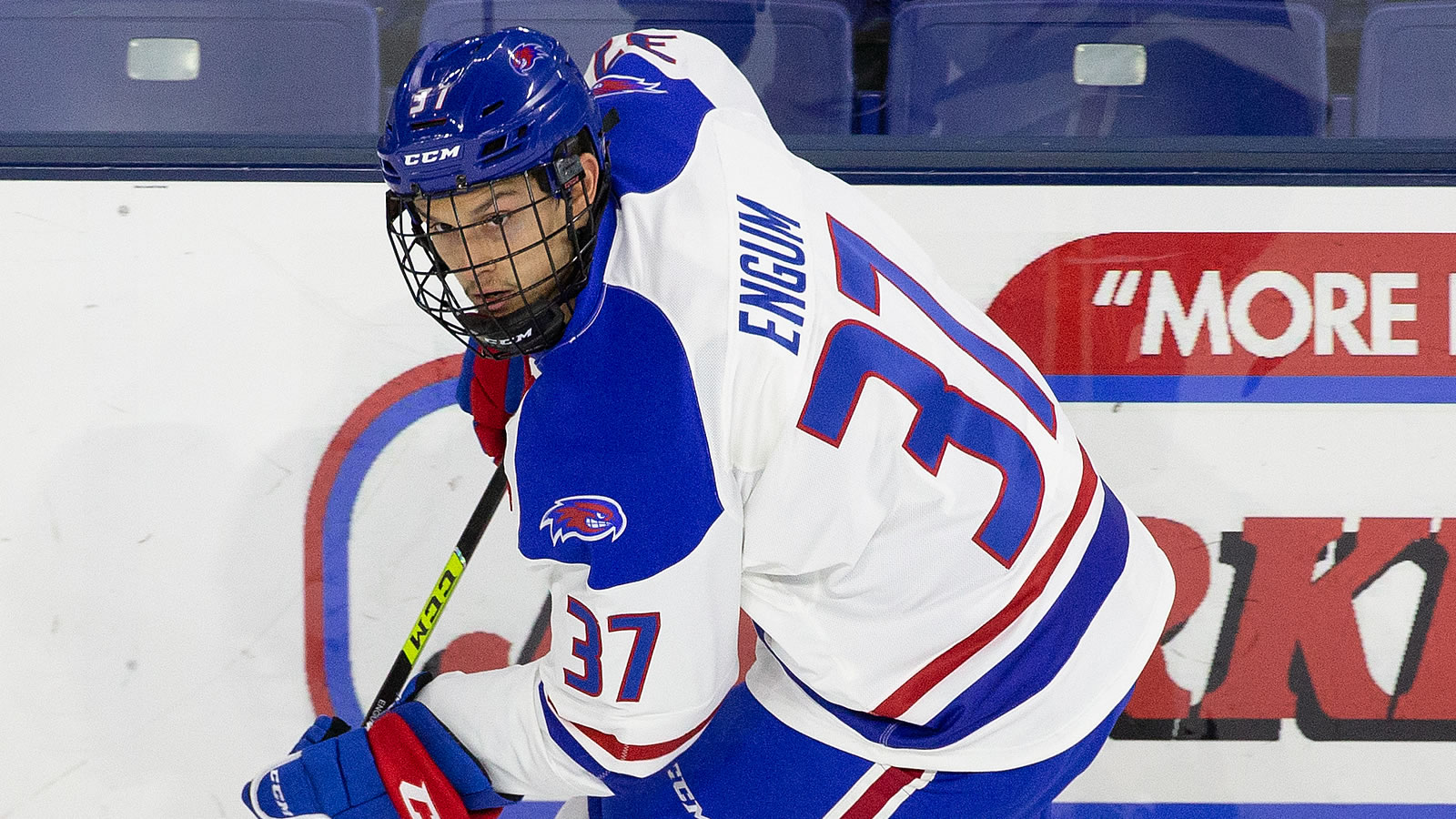 Brehdan Engum (So., D; Burnsville, Minn.) had a strong performance in the River Hawksâ two-game home series against Big Ten opponent Michi- gan State. He scored the game-tying goal with 38 seconds left in regulation to help the River Hawks earn a tie against the Spartans Friday night and played a critical role on defense against Michigan State in a 4-0 shutout win on Saturday, posting a career-best four blocks to lead the UMass Lowell defense on Saturday. He finished the weekend with five total blocks and a plus-one rating. 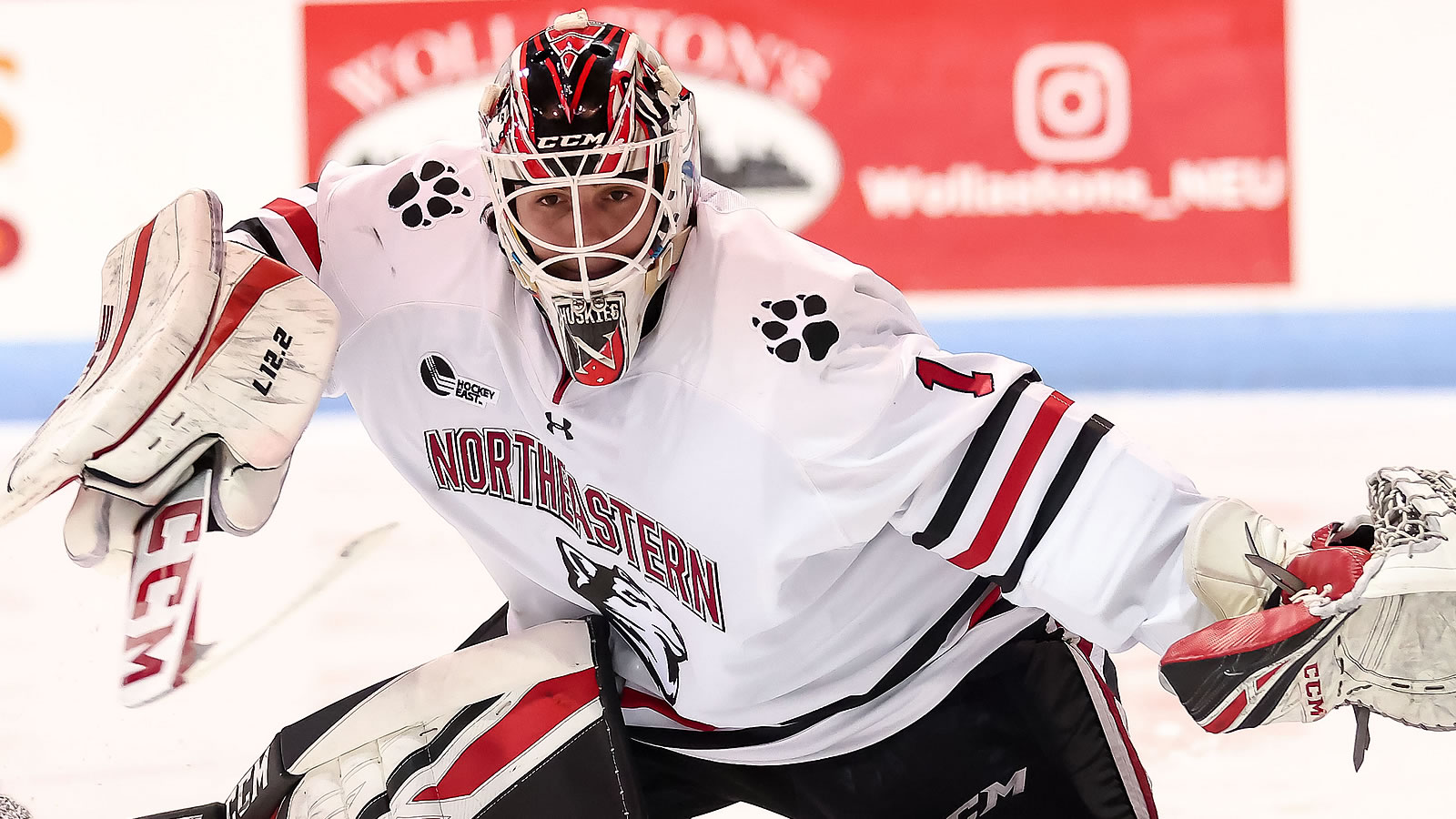 Devon Levi (So., F; Dollard-des-Ormeaux, Que.) had 25 saves on the way to his third shutout of the season in a 1-0 win over Colorado College on Saturday night. Levi is now tied for eighth all-time on the Huskies shutout leader board after just five career games and got to three shutouts 19 games faster than Cayden Primeau.

Drew Helleson, BC (Jr., D; Farmington, Minn.) Posted a goal and two assists on Saturday night as Boston College took down #8 Denver in a 5-1 win. He put five shots on goal and blocked three more in his defensive zone on the weekend.

Jack McBain, BC (Sr., F: Toronto, Ont.) Racked up four points on a goal and three assists in a split non-conference weekend for the Eagles and now leads Hockey East in overall scoring with nine assists and 11 points. He had two points in each outing and has four multi-point games in six games played this season. He also fired 10 shots on net.

Eric Dop, BC (Gr., G; Lewis Center, Ohio) Made 26 saves on 27 on Saturday night, stopping a potent #8 Denver offense and holding them to just one goal in a 5-1 victory.

Dylan Peterson, BU (So., F; Roseville, Calif.) Tallied his first career hat trick, including an unassisted shorthanded goal, in the Terriersâ 8-6 win over Merrimack on Saturday night. Peterson scored on all three shots he took Saturday and was a plus-three on the weekend.

Nik Armstrong-Kingkade, UML (So., F; Alexandra, Va.) Led the River Hawks to victory Saturday night against Big Ten opponent Michigan State by scoring two goals against the Spartans in a 4-0 win. The sophomore potted a shorthanded goal on the penalty kill and the outing marked the first multi-point and multi-goal game of his career. He finished with a plus-three rating and two blocks across an undefeated weekend.

Zach Vinnell, MC (Jr., D; Cochrane, Alta.) Netted the first hat trick by a Warrior defenseman since New Yearâs Day 2011 when he tallied three goals in the final 26 minutes of Saturdayâs game against Boston University, fueling a rapid comeback that fell just short in an 8-6 setback. He finished with seven shots on the evening.

Jack Hughes, NU (Fr., F; Westwood, Mass.) Scored the game-winning and lone goal off a rebound in a 1-0 win over Colorado College on Saturday night.

Max Crozier, PC (Jr., D; Calgary, Alta.) Made his season debut on Friday night against #8 Denver and registered a goal and two assists to guide the Friars to the comeback victory.