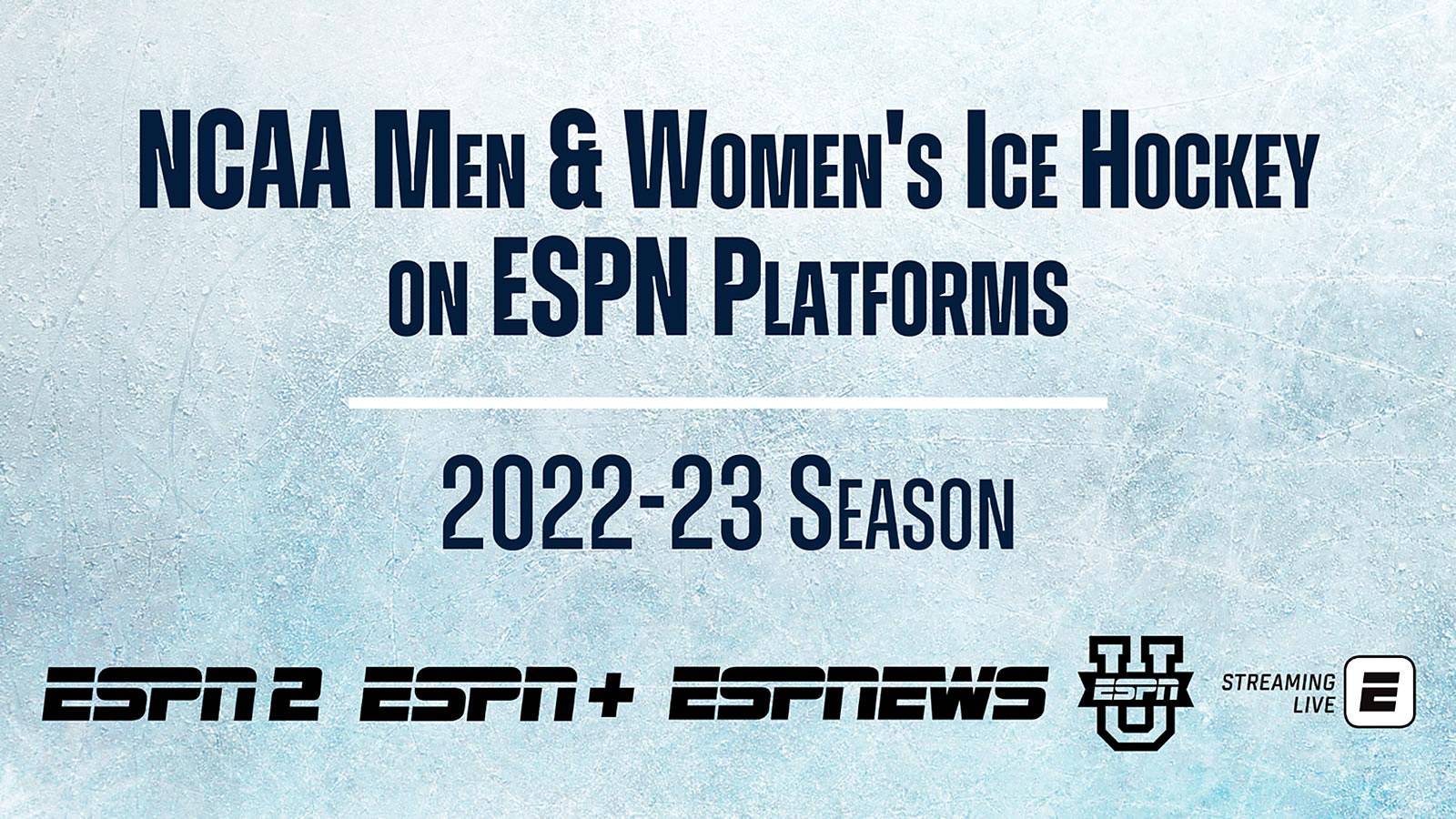 The Puck Drops for 2022-23 College Hockey Season with More Than 640 Men and Womenâs Games on ESPN Platforms
Boston College and No. 8 Northeastern women featured in first game on ESPNU on November 11
PDF Format

ESPN continues its unrivaled commitment to hockey with more than 640 games across ESPN networks and ESPN+ during the 2022-23 NCAA men and womenâs ice hockey seasons. The lineup features exclusive coverage of the NCAA post season culminating with the exclusive presentation of the NCAA Menâs and Womenâs Frozen Four championship events.

ESPN+ will stream over 600 games on the platform with matchups from the ECAC Hockey, Hockey East and Ivy League conferences. This year marks the beginning of a new six-year rights agreement with Hockey East, featuring over 300 menâs and womenâs games annually including the Hockey East Womenâs Tournament Championship. ESPNU will also feature a pair of prime time Big Ten matchups in February.

The robust college slate on ESPN+ further establishes the platform as the âHome of Hockey,â including exclusive NHL games, NHL Power Play on ESPN+, every game of the Premier Hockey Federation (PHF) and more.

The puck drops for the first game of the season on ESPN networks on Friday, Nov. 11, with a womenâs matchup between cross-town rivals Boston College and No. 8 Northeastern on ESPNU (1:30 p.m. ET). Joe Malfa and Andrew Raycroft will be on the call for the Hockey East showdown.

The men open play on ESPNU on Wednesday, Nov. 23, as No. 18 Notre Dame travels to Boston to take on No. 14 Boston University in the cross-conference matchup. Clay Matvick and Andrew Raycroft will be calling the game for the 5 p.m. start.

The slate of ESPN network games in 2022 wraps up with a cross-town rivalry menâs game between No. 14 BU and Boston College. ESPNâs lead #Cawledgehockey voice John Buccigross and BU alum Colby Cohen will call the Dec. 9 game on ESPNEWS (7 p.m. ET).

Network games return in February 2023 with two Big Ten menâs matchups before the Womenâs Hockey East Championship takes center ice in March on ESPNU. The season will wrap up with the men and womenâs Frozen Four games across ESPN networks with lead analyst crews of Buccigross, Barry Melrose and Cohen, along with Matvick, AJ Mleczko and Hilary Knight.

The womenâs semifinal games begin on Friday, March 17, and the NCAA Championship on Sunday, March 19, from Amsoil Arena in Duluth, Minn. (ESPN+, ESPNU).

The men begin their post-season play on Thursday, March 23, and conclude with the Frozen Four semifinal games on Thursday, April 6, and the NCAA Championship on Saturday, April 8, from Amalie Arena in Tampa, Fla. (ESPN2).

Further commentary lineups and scheduling updates including the full slate of post season games will be announced throughout the season.

ESPN+ is the industry-leading sports streaming service that offers fans in the U.S. thousands of live sports events, original programming not available on ESPNâs linear TV or digital networks and exclusive editorial content from dozens of ESPN writers and reporters. Launched in April 2018, ESPN+ has grown to more than 24.3 million subscribers. Fans sign up to ESPN+ for just $9.99 a month (or $99.99 per year) at ESPN.com, ESPNplus.com or on the ESPN App (mobile and connected devices)