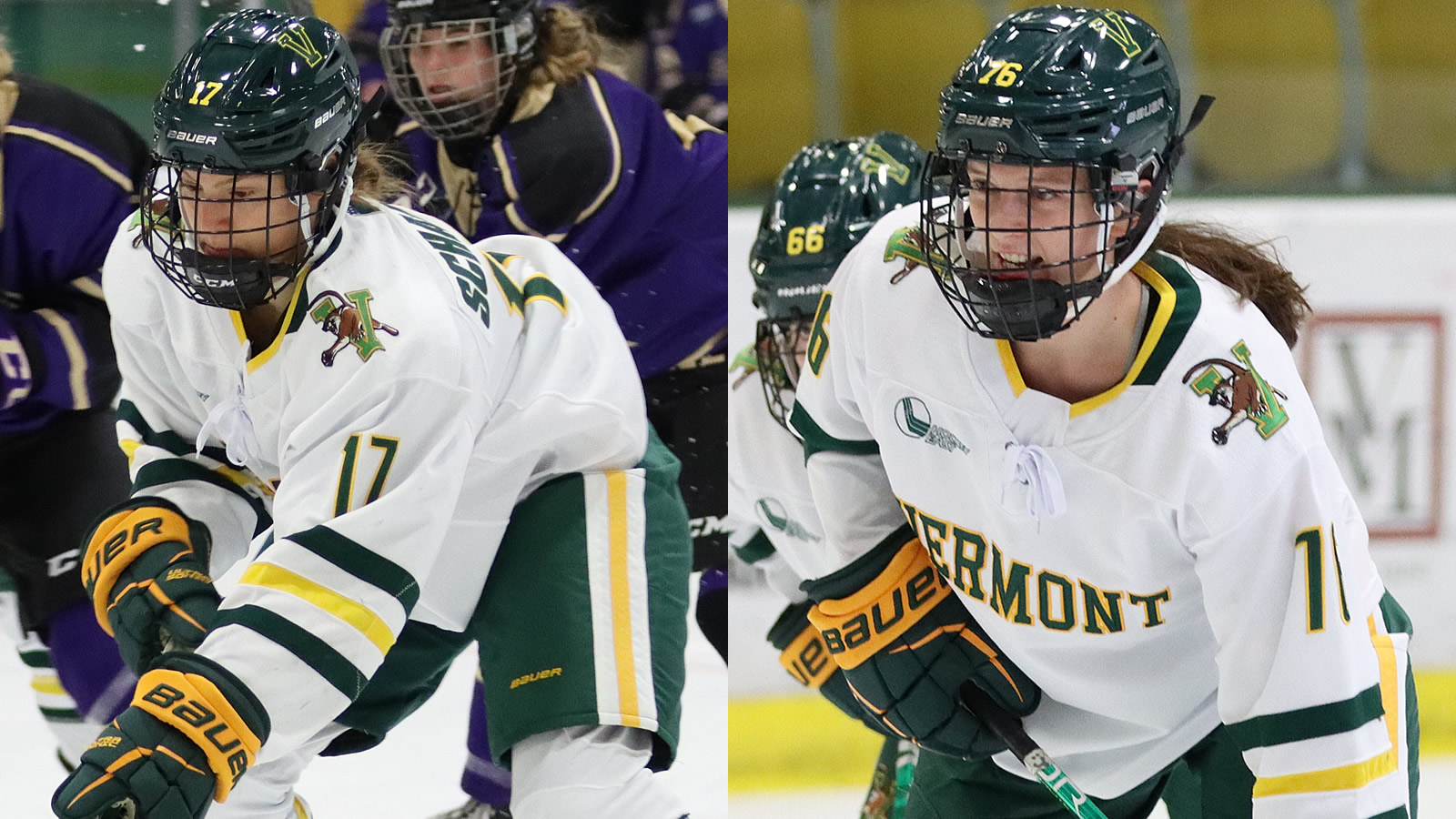 Vermont earned five Hockey East points in a road weekend at Merrimack. After a 5-4 overtime win Saturday, the Catamounts took a 5-2 victory the next day. Maude Poulin-Labelle had a hat trick and Theresa Schafzahl registered five points as Vermont. Schafzahl assisted on the game-winning overtime goal on Saturday and on Sunday she became the first Catamount in program history to have five points in a single game. Poulin-Labelle also became the fourth Catamount in program history to have two or more hat tricks in their career.

#4 Northeastern earned six Hockey East points and moved their unbeaten run to 11 straight games with victories over New Hampshire and UConn. Chloe Aurard returned from international duty with Team France with three goals on the weekend, including Fridayâs game-winner. Skylar Fontaine notched three points on the weekend, all assists, including the primary helper on the game-tying and game-winning goals.

Maine pushed its winning streak to four consecutive games in league play with victories over Boston University and Providence. Mira Seregely scored the game-winning goal in Maineâs 3-2 victory over the Friars. It was her first collegiate goal. Loryn Porter totaled 63 saves on 66 shots with a pair of wins.

Boston University split a weekend set, falling at Maine, 5-1, before returning home to take a 5-4 win over #10 Boston College. Courtney Correia tallied a goal and an assist, including the game-winning goal with 3:47 remaining in regulation to break a 4-4 tie with the Eagles.

Theresa Schafzahl (Sr., F: Weiz, Austria) Returning from Olympic qualifying, Schafzahl had two goals and five assists for seven points in UVMâs weekend sweep of Merrimack. She assisted on the game-winning overtime goal on Saturday and on Sunday she became the first Catamount in program history to have five points in a single game.

Maude Poulin-Labelle (Sr., D; Sherbrooke, Que.) had five points as Vermont swept Merrimack this weekend. On Sunday she became the fourth Catamount in program history to have two or more hat tricks in their career, scoring three times against the Warriors. 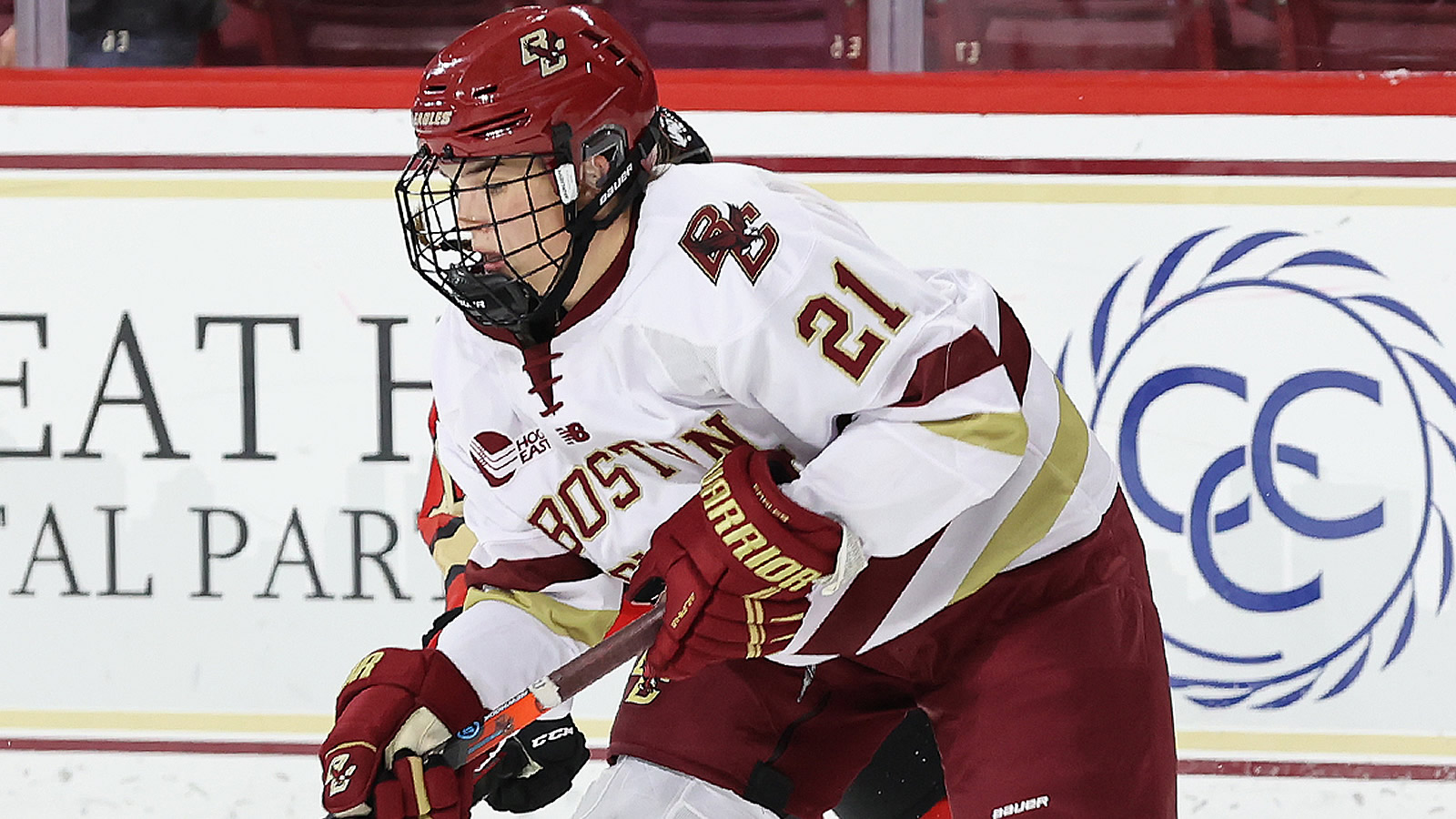 Abby Newhook (Fr., F; St. Johnâs, New.) had two points on one goal and one assist in a 4-2 victory over Holy Cross. She scored the game-winning goal against the Crusaders at 6:32 of the third period on a televised game on NESN. She finished the two-game weekend with five shots on goal and picks up Pro Ambitions Rookie of the Week for the second consecutive time and the third overall nod this season. 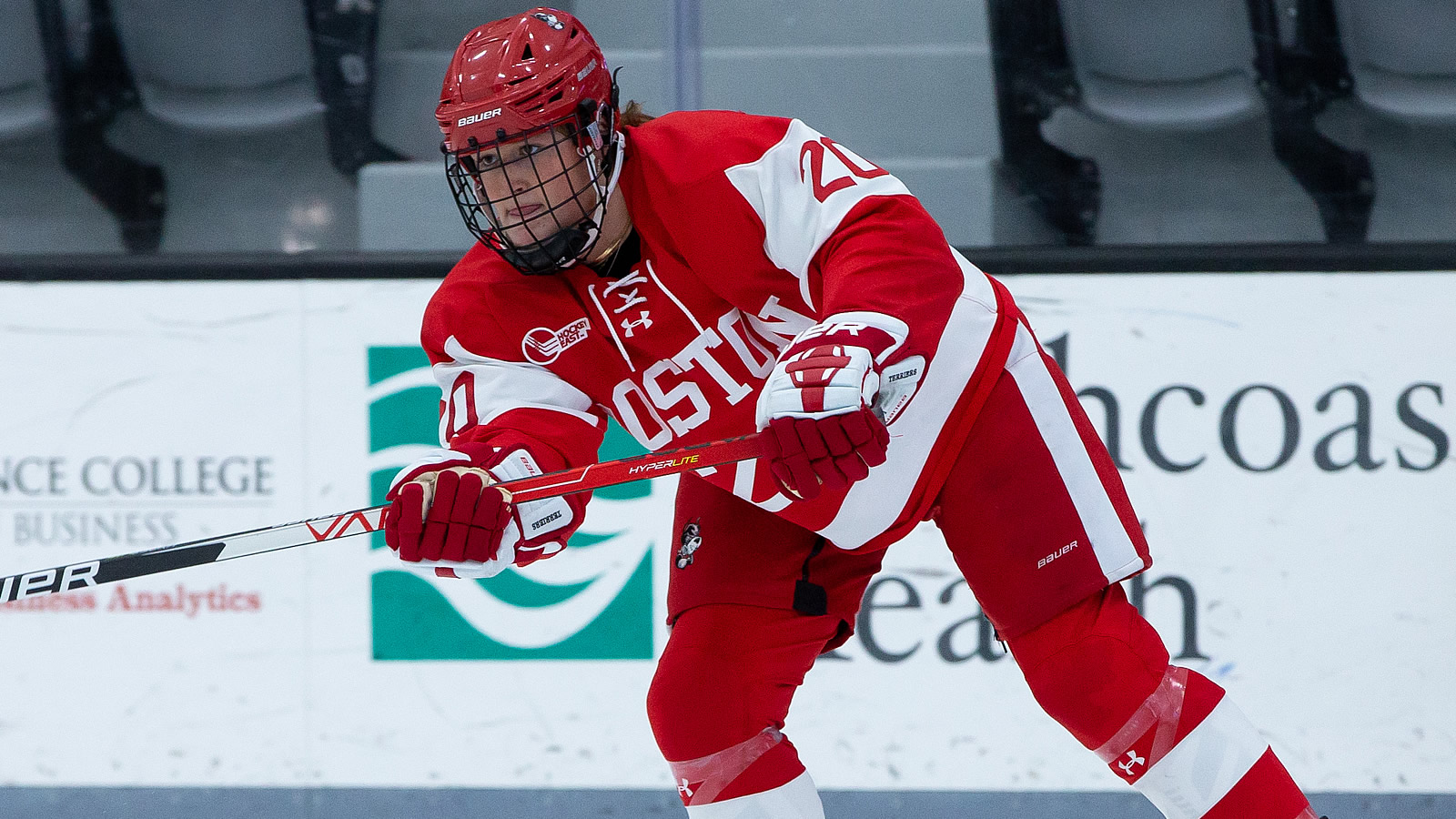 Julia Shaunessy (So., D; Marshfield, Mass.) in the Terriersâ 5-4 win over #10 Boston College. She notched a career-high four assists, all of which were the primary helper, and was a plus-three against the Eagles. Shaunessy also generated four shots on goal. She now has six assists this year. 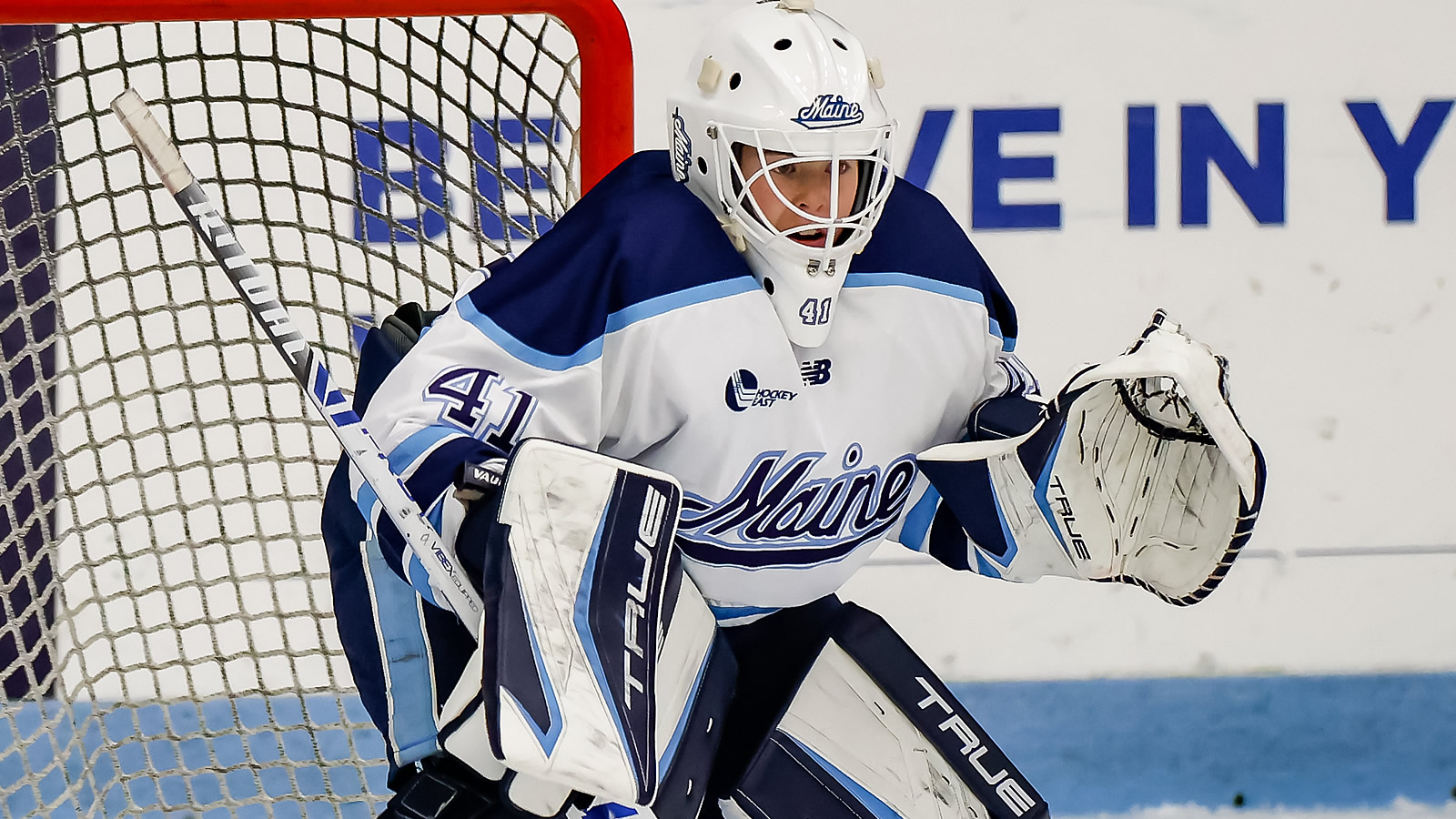 Loryn Porter (Gr., G; North Bay, Ont.) totaled 63 saves on 66 shots with a pair of wins. She picked up 22 saves on 23 shots faced in the victory over Boston University on Friday. She followed up the win with her second win of the weekend, a 41-save performance on 43 shots faced against Providence.

Abigail Levy, BC (Sr., G; Congers, N.Y.) Stopped 77 shots in a split weekend, including a 40-save performance on Saturday.

Courtney Correia, BU (Sr., F; Whitby, Ont.) Tallied a goal and an assist, including the game-winning goal with 3:47 remaining in regulation to break a 4-4 tie with #10 Boston College in a thrilling 5-4 triumph over the Eagles on Sunday. Correia generated five shots on goal and was a plus-two.

Christina Vote, BU (Fr., F; Arlington, Mass.) Lit the lamp in the third period during the Terriersâ 5-4 win over #10 Boston College. She was a plus-one and had two shots on goal in the victory.

Mary Edmonds, HC (Jr., F; Fairfield, Conn.) Had two points off a goal and an assist at Boston College on Friday afternoon. It was the first multi-point game of her career.

Mira Seregely, ME (Fr., F; Budapest, Hungary) Scored the game-winning goal in Maineâs 3-2 victory over Providence. It was her first collegiate goal and it extended the Black Bears conference winning streak to four.

Taylor Leech, ME (Gr., D; Bowdoinham, Maine) Netted a goal in in each of Maineâs games on the weekend. She scored the game-winning goal against Boston University on Friday. She then scored her second of the weekend and picked up an assist in the contest on Sunday in the victory over Providence.

Kira Juodikis, UNH (Fr., F; LaSalle, Ont.) In her return to the lineup after missing two games due to injury, Juodikis scored a goal in UNHâs 4-1 setback at #8 Northeastern. The UNH rookie scored her team-leading seventh goal of the season to lift the Wildcats within 3-1 at 10:23 of the third period. She finished the game with three shots and a plus-one rating. Juodikis has recorded a point in 7 of 10 games this season.

Maddie Truax, UNH (Sr., D; Gardner, Mass.) Recorded a season-high eight blocks in last Fridayâs game at fourth-ranked Northeastern. She also had an even on-ice rating. Truax is atop the Hockey East leaderboard, and third in the nation, with 38 blocks.

Ava Boutilier, UNH (Sr., G; Charlottetown, P.E.I.) Registered a season-high 42 saves in UNHâs 4-1 loss at fourth-ranked Northeastern last Friday. She made 16 saves in the first period, followed by 19 in the second and seven more in the final frame. Two of the goals against Boutilier were scored on the power play.

Chloe Aurard, NU (Sr., F; Villard-de-Lans, France) Returning from international duty with Team France, Aurard led the Huskies to a 2-0-0 weekend with three goals on the weekend; she notched two against UNH on Friday, including the game-winner, and notched the opening goal of a three-goal comeback on Saturday against UConn.

Skylar Fontaine, NU (Gr., D; East Greenwich, R.I.) Notched three points on the weekend, all assists, in a 2-0-0 weekend. Fontaine was instrumental in NUâs 3-goal comeback against UConn, notching the primary assist on the game-tying and game-winning goals.

Lindsay Bochna, PC (So., F; Toronto, Ont.) Put up two points against UConn with a goal and an assist on Friday night's matchup. Secured the extra point for Providence in the fourth round of shootouts, 1-0. Added a goal in the Friars 3-2 loss against Maine on Sunday in the last 26 seconds of play. Is leading the Friars in points this season (10).