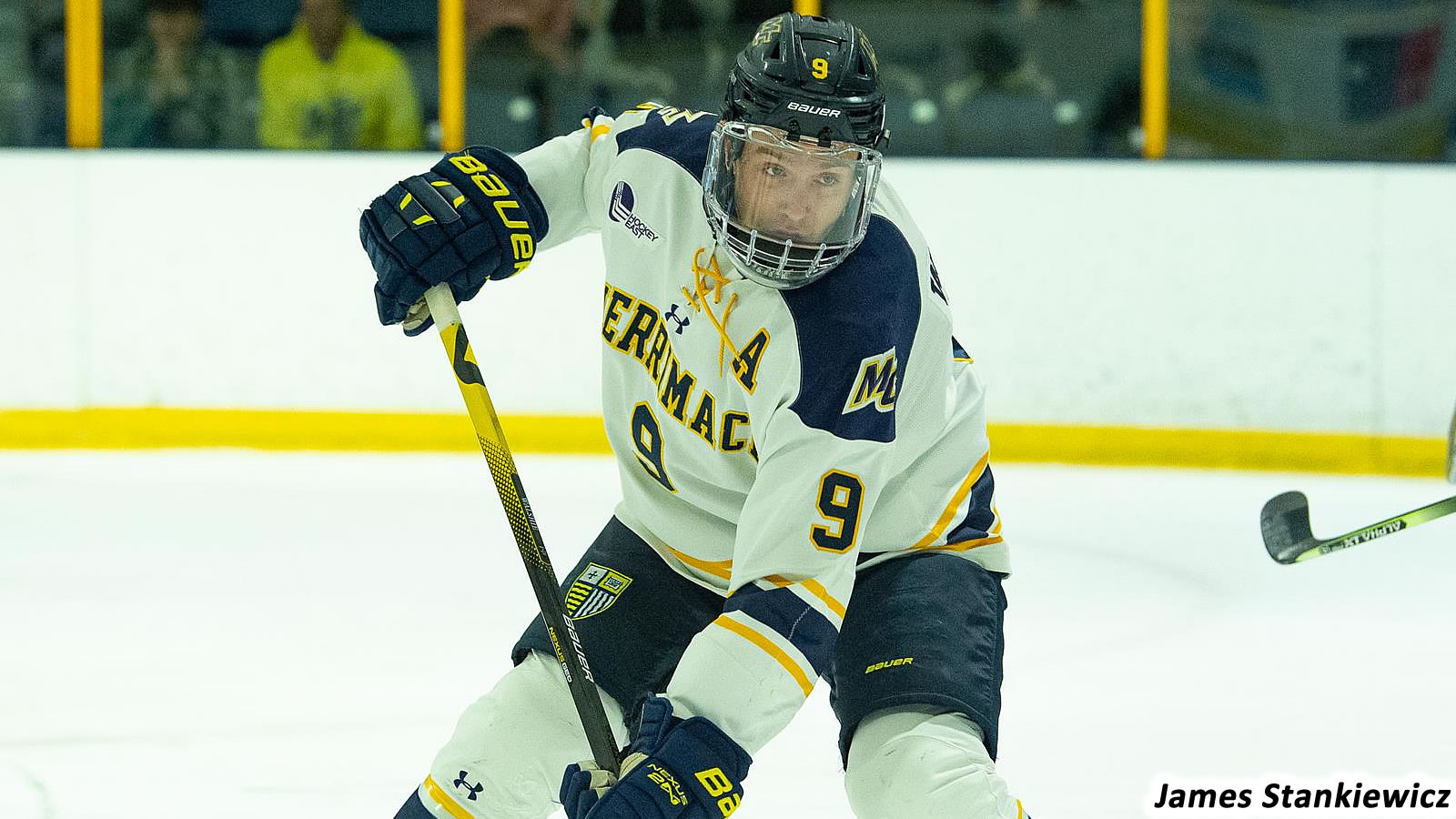 LOWELL, Mass. - Just when it seemed impossible, the red hot Merrimack College men's hockey team found a way, as it scored three unanswered goals to hand #10/9 UMass Lowell its first home loss of the season in a 3-2 decision at Tsongas Center Saturday evening.

The Warriors were lifted by a pair of power play goals from Liam Walsh, including the game-winner midway through the third period. It completes a four-point weekend for the junior. Jake Durflinger notched the game-tying goal on an incredible play where he batted the puck into the goal off a deflected pass.

UMass Lowell took a 2-0 lead over eight minutes into the second period before the Warriors unleashed with three unanswered goals, which all came in under a 16-minute span.

Zachary Borgiel got the win in goal with 18 saves on 20 shots, then he was relieved by Hugo Ollas for the final 11:14 of the game after Borgiel was run into by a River Hawk player. Ollas made four saves in relief.

- Merrimack played a solid opening frame and had the edge in shots on goal throughout most of the second half of the frame, but the River Hawks struck in the final five seconds of the period to take a 1-0 lead into the dressing room.

- The Warriors looked to climb back into the game in the second period, but the River Hawks took advantage of an odd-man rush just over eight minutes into the stanza to stretch the lead to two.

- A team that shown plenty of resiliency all season long, the Warriors turned it up a notch after the second UMass Lowell goal. It took nearly 32 minutes of game time before any penalties, but the River Hawks got nabbed for holding at the 11:29 mark for Merrimack's first power play. It didn't take long for the Warriors to get on the board, as Declan Carlile played a puck to the half wall for Filip Forsmark. The junior bumped it to the slot for Ben Brar, who one-timed it on the net and the rebound fell to Walsh for the finish.

- Momentum stayed with the Warriors and they tied the game three minutes later on what can only be described as a "circus goal" from Durflinger. Adam Arvedson started an odd-man rush with a stretch pass to Forsmark into the attacking end. On a 2-on-1, Forsmark's pass was deflected into midair, but Durflinger got his stick into the air and batted it directly into the top half of the net for an incredible display of hand-eye coordination.

- The River Hawks had a chance to grab the lead on a power play, but Borgiel and the Warriors shut them down to keep it deadlocked after 40 minutes of play.

- UMass Lowell appeared to have taken the lead early on in the third period, but Borgiel made an incredible stretch save to keep the game even.

- Merrimack's scalding hot power play got another opportunity just over seven minutes into the third period and needed just seven seconds to score the eventual game-winner. Carlile gathered the puck at the left point after a faceoff win, then sent a pass to the other point for Zach Uens. The junior defenseman took a one-timed slap shot along the ice and Walsh put his stick down in the lane to deflect it home to the far side of the net.

- UMass Lowell had another power play chance thwarted later on in the third period, then pulled its goalie with under a minute to play, but failed to get any quality chances towards Ollas and the Warriors returned to North Andover with another three points in the Hockey East standings.

- Walsh has been on an absolute tear since the turn of the calendar. He has points in six of seven games in the month of January, which includes three goals and six assists for nine points.

- Forsmark had a trio of helpers on the weekend and is on a three-game point streak.

- Brar led the team with five shots on goal.

- Max Newton was back to his dominant ways at the faceoff dot with 14 wins on 19 opportunities.

- The victory was Borgiel's sixth of the season.

- Merrimack has now won five games in a row, which is the first such stretch since the beginning of the 2011-12 season.

- Five different players now have 15 points or more on the season, including Newton, Forsmark, Walsh, Carlile and Brar.

Merrimack has a quick turnaround, as it heads to Hartford, Conn. Tuesday for a showdown with Connecticut. Puck drop is set for 7:05 pm from XL Center.