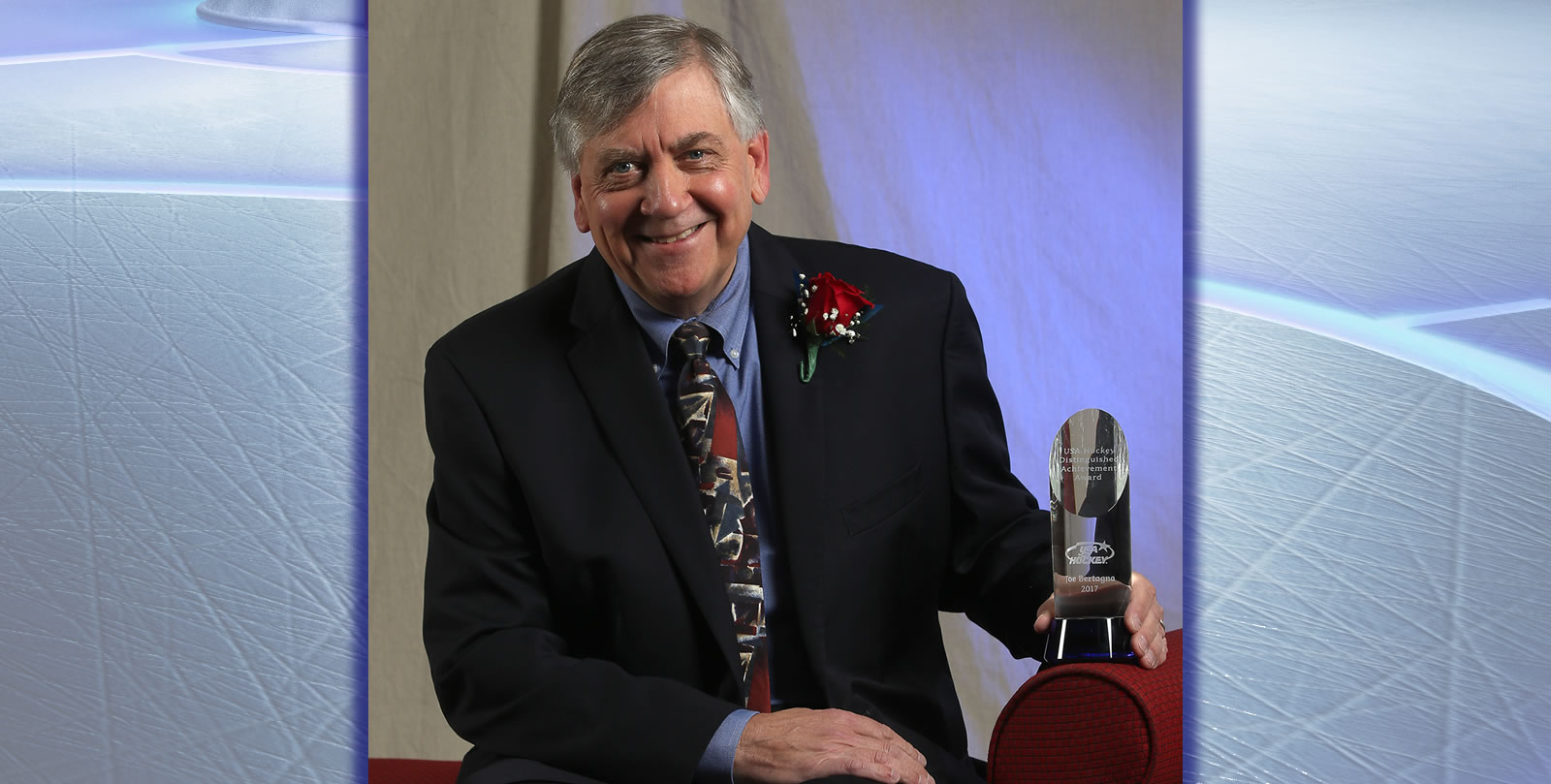 "Joe has been a tremendous leader of Hockey East since taking o ver as our first-ever full-time commissioner 22 years ago," said Jeff Schulman, Director of Athletics for the University of Vermont and Chair of Hockey East's Men's Executive Committee. "He has been the driving force in helping to grow our men's and women's leagues both in terms of membership, competitive quality, and our position in the landscape of Division I college hockey."

"I have had a good run with Hockey East and am grateful for the opportunities the schools have provided me for more than two decades," said Bertagna. "Adding my time with the ECAC to the Hockey East years, I will have contributed to 38 season of college hockey and am very proud of what has been accomplished on my watch."

Added Schulman, "The Hockey East athletic directors are extremely appreciative of everything Joe has done for Hockey East and college hockey generally. Joe will be assisting us in a consulting role moving forward and we know that he will continue to be a valued ambassador of college hockey."

Bertagna is a native of Arlington, Massachusetts, having launched his hockey career there as a goaltender for legendary coach Ed Burns. He went on to play goal for three other Hall of Fame coaches at Harvard University: Ralph "Cooney" Weiland, Tim Taylor and Billy Cleary. His administrative career began as an intern with the Eastern College Athletic Conference (ECAC) in the fall of 1976. He returned to the ECAC in 1982 as an ice hockey administrator under the tutelage of Scotty Whitelaw and Clayton Chapman.

"This is not a retirement," added Bertagna. "They say when one door closes, another door opens. I look forward to starting my final year with the conference and seeing what doors open up for me in the future."

The Executive Director of the American Hockey Coaches Associati on (AHCA) since the position was first created in 1991, Bertagna will remain in that capacity as his agreement was recently extended through the 2022-23 season. He is also active as a nationally-recognized coach of goaltenders, having run summer programs for the past 46 years as well as serving in such high visibility roles as goalie coach for the Boston Bruins (1985-91) and the U.S. Olympic Team (1994.)

"I have not met an individual who has poured more of himself into his league (Hockey East) or been more passionate to grow the sport for the benefit of so many constituent gro ups than Joe," said Steve Hagwell, Commissioner of ECAC Hockey and President of the Hockey Commissioners Association. "He is tireless in his efforts to ensure that the traditions of the game are respected, and the individuals who have forged the path forward are not forgotten."

"I have had the privilege of knowing and working with Joe for many years," said Hilary Witt, Head Coach of the University of New Hampshire. "He has been a supporter and advocate of women's hockey for decades. His impact on the game at every level is unmatched. I am incredibly grateful for the time, effort and passion Joe has put in to Hockey East and this amazing sport."

Bertagna has carved out a unique career in ice hockey, both at the amateur and professional levels. He is the longest serving commissioner in Hockey East history and is currently the longest serving hockey commissioner in the NCAA. During his tenure, Bertagna has overseen a number of triumphs for the conference, including a successful hosting of the 2015 NCAA Frozen Four in Boston, several new television contracts, multiple sold-out events at Fenway Park, and the addition of the University of Notre Dame, the University of Connecticut, and the College of the Holy Cross to the conference membership.

Added Hagwell, "Joe is the consummate 'hockey guy.' He has always been fully committed to the success of Hockey East first and foremost, and has done so in a first-class mann er. But what sets Joe apart in my eyes has been his serving as an advocate of what is best for the game, while cont emplating how to move forward for the benefit of all parties."

In the summer of 2017, Bertagna's career accomplishments were recognized with a pair of prestigious honors as he was presented the Distinguished Service Award by USA Hockey and was inducted into the Massachusetts Hockey Hall of Fame by Massachusetts Hockey. The Distinguished Service Award was of particular satisfaction to Bertagna given that previous recipients included two of his college coaches, Tim Taylor and Bill Cleary, along with Hockey East luminaries Jerry York, Jack Parker and Ben Smith. In the spring of 2018, his ECAC years were recognized when he was inducted into the ECAC Hall of Fame.

Since starting as a player at Harvard University in 1969, Bertagna has served the game as coach, administrator and journalist. The latter role has been largely overshadowed by his coaching and administrative accomplishments but Bertagna has authored a number of books, the most recent being, "The Hockey Coaching Bible," released in the fall of 2015 by Human Kinetics. The collection of instructional pieces includes chapters written by a number of coaches with ties to Hockey East, including Bertagna, Mike Cavanaugh, Mark Dennehy, Nate Leaman, Jack Parker and Ben Smith.

Bertagna has also written numerous books on goaltending as well as a pictorial history of Harvard University athletics. In the mid-1980s, Bertagna also edited two editions of "Not The Boston Globe," a successful parody of the daily newspaper sold throughout New England.

Bertagna is best known for his administrative work in college hockey. After spending 15 years as the primary ice hockey administrator the ECAC, Bertagna became Hockey East's fourth commissioner on July 1, 1997. A native of Arlington, Massachusetts, Bertagna began working at the ECAC in 1982, when he was named Tournament Director. He was later named Executive Director of Ice Hockey before he was appointed Ice Hockey Commissioner in 1991.

Bertagna made his mark immediately at Hockey East, engineering a multi-year television deal (SportsChannel New England) in his first month on the job. Shortly thereafter, leag ue tournament attendance rocketed upward, leading to the event's first-ever sellout in 2000. Bertagna was instrume ntal in bringing about the formation of the Women's Hockey East Association, just as he initiated league play for both Division I and Division III women's programs while with the ECAC. In 2013, the directors recognized his contributions to the women's game by dubbing the Women's Hockey East championship trophy the Bertagna Trophy.

Bertagna has also delivered a number of high profile special events for Hockey East member schools. During the 2015-16 season, UMass Lowell and Northeastern University played in the first Friendship Four Tournament over Thanksgiving weekend in Belfast, Northern Ireland, along with Brown University and Colgate University. Since the inaugural event, nearly every Hockey East men's program has traveled overseas and in 2019 Bertagna was instrumental in organizing the first-ever international women's series between Northeastern and Clarkson University in Belfast.

In January of 2010, Bertagna and his staff administered the first outdoor college hockey game in the east when Boston's fabled Fenway Park played host to a Hockey East double header. The event, which sold out on the first day of public sale in September 2009, was an unprecedented success for the conference, both financially and in terms of exposure. In January 2012, Bertagna negotiated another contract with the Red Sox, creating a doubleheader for January 2012 featuring the league's four Division I state universities: Maine, Massachusetts, New Hampshire and Vermont. As in 2010, the event sold out, leading to the addition of third contest, BC vs. Northeastern. For the 2014 iteration, Bertagna negotiated for the inclusion of eight of Hockey East's 11 men's teams, including newcomer Notre Dame. In 2017, another pair of doubleheaders insured that each Hockey East school has enjoyed the Fenway experience since the outdoor games began.

Nationally, Bertagna has been the Executive Director of the American Hockey Coaches Association since 1991, the only person to serve in that capacity. In this role, he has overseen the growth of AHCA membership from fewer than 300 members in 1992 to more than 1,400 members today. He has served two separate stints on the NCAA Ice Hockey Rules Committee, chairing the committee each time. He also serves on the Board of Directors of both USA Hockey and the Hockey Humanitarian Award Foundation.

Another major contribution on the national stage has come in his role with the Hockey Commissioners Association (HCA.) The commissioners of the six NCAA Division I men's ice hockey conferences have launched a number of initiatives that have helped grow the game at the national and international levels. In recent years, Bertagna was instrumental in securing funds for the formation of College Hockey, Inc., the marketing arm of the HCA, as well as expanding the opportunities afforded to the women's leagues.

Beyond his college hockey accomplishments, Bertagna has forged an international reputation as a student and coach of goaltending. No one in North America is respected more for his contributions to the study of the position. This summer, he celebrates his 46th year as a goalie coach, having operated his own clinics for thousands of goalies of all ages throughout New England since 1974. He continues to speak on the subject for USA Hockey throughout the United States. Through his camps, lectures, print mater ials and full-length instructional videos, he has influenced the teaching of young goaltenders more than any other goaltending coach in the United States. His seventh full-length instructional video, "Goaltending Today: Traditional Values through New Techniques," was released by Championship Productions of Ames, Iowa, in 2011.

He began his professional coaching career in 1985 with the Boston Bruins, remaining with the club as the goaltender coach until 1991 and rejoining the team for the 1994-95 season. He also part of the coaching staffs of the U.S. Men's National Team at the 1991 Canada Cup, the U.S. Olympic Men's Ice Hockey Team at the 1994 Winter Olympics, and with the Milwaukee Admirals from 1994-96.

Bertagna enjoyed a brief college coaching career at Harvard University in the late 1970s, serving as Men's Junior Varsity Coach in 1976-77 before launching Harvard's women's ice hockey program in 1977-78. He served as head coach of Harvard Women's Hockey for two seasons. Beginning with this experience, Bertagna has dedicated his professional years to advancing the interests of women's ice hockey.

As a player, Bertagna began at Arlington (Mass.) High School, before going on to Harvard University. A two-year starter at Harvard (1971-72 and 1972-73), Bertagna led the Ivy League with a 2.45 GAA in 1972. After Harvard, he played professionally for the Milwaukee Admirals and in Cortina, Italy. He helped lead his S.G. Cortina d'Ampezzo squad to the 1975 Italian Championship.

Bertagna and his wife Kathy, a two-sport athlete at Bates College, reside in Gloucester with their three children, Bobby, Joey, and Grace.