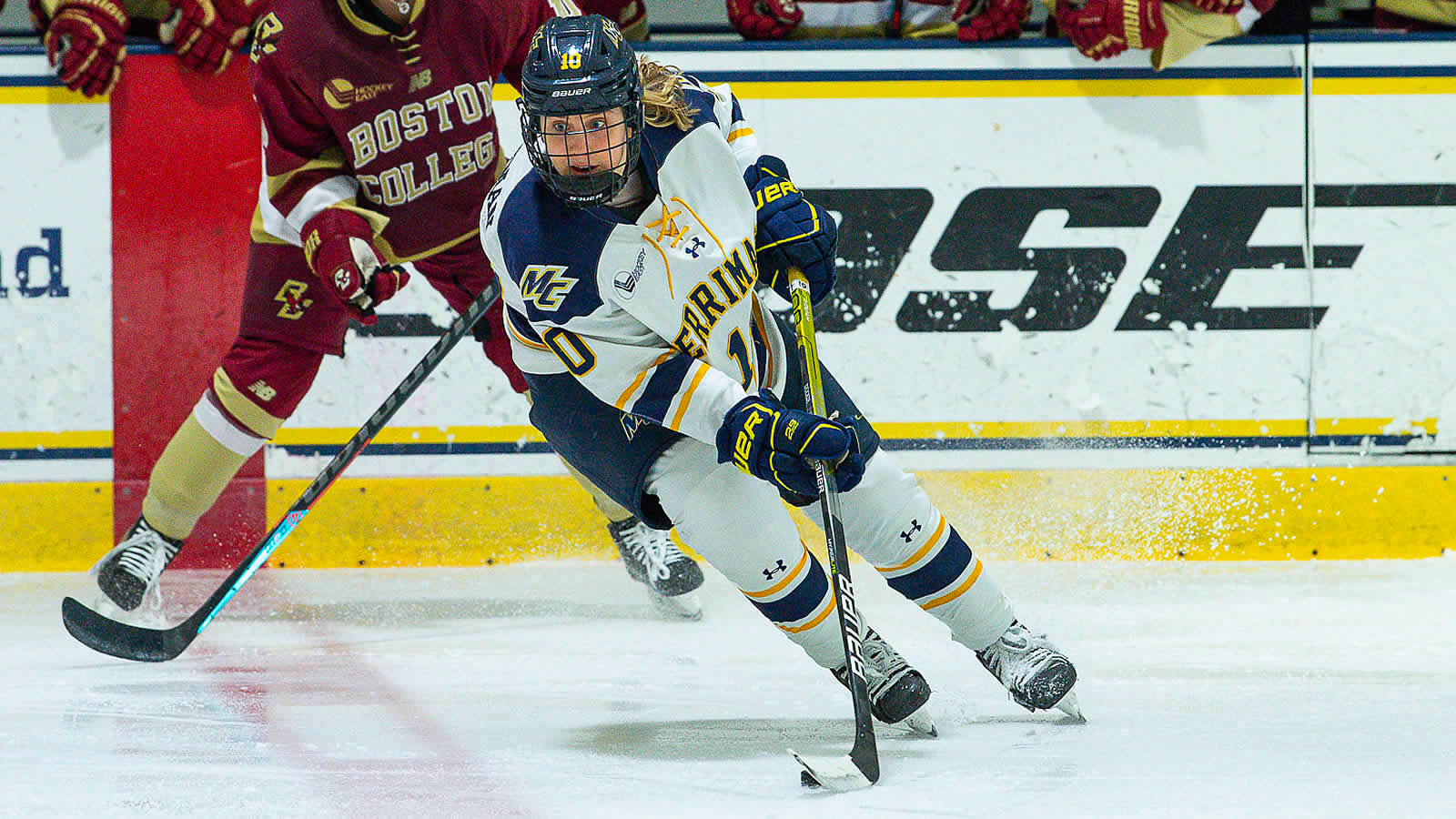 #5 Northeastern and #13/12 Providence battled in a two-game set of top-ranked Hockey East programs, with the Huskies earning five of six league points with a win and a tie with a shootout victory. Gwyneth Philips made 46 saves over a 1-0-1 weekend for the Huskies. Philips posted 13 saves in Fridayâs 4-1 win over #13 Providence. She followed up that performance with a career-high 33 saves in a 2-2 tie with Providence.

Maine and UConn traded shutouts in a split series in Storrs. Fridayâs 1-0 tilt went the way of the Black Bears as Luisia Welcke buried the lone goal with a helper from twin sister Lilli Welcke. The next day, Tia Chan stopped all 41 shots she faced to earn the shutout in a 2-0 win.

Merrimack and Boston University split a series as Merrimack earned the first league win of the season with a 5-2 win on Friday. Warriors captain Katie Kaufman recorded four points (2g, 2a) including two goals, one the game-winner, and one assist in the win. Terrier rookie Sydney Healey scored a goal in both ends, including the game-winner on Saturday in a 5-2 victory.

Nicky Harnett stopped 36 of 37 shots to backbone UNH to a weekend sweep of Holy Cross as she went 2-0-0 with a 0.50 GAA, .973 save percentage and one shutout. The lone Crusaders goal came courtesy of a power-play strike.

Katie Kaufman (Sr., F; Lake Elmo, Minn.) recorded four points (2g, 2a) last weekend in a home-and-home split series against Boston University. Her output included two goals and one assist against the Terriers in Fridayâs 5-2 victory, the Warriors first in league play this season. Her second tally proved to be the game-winning strike. 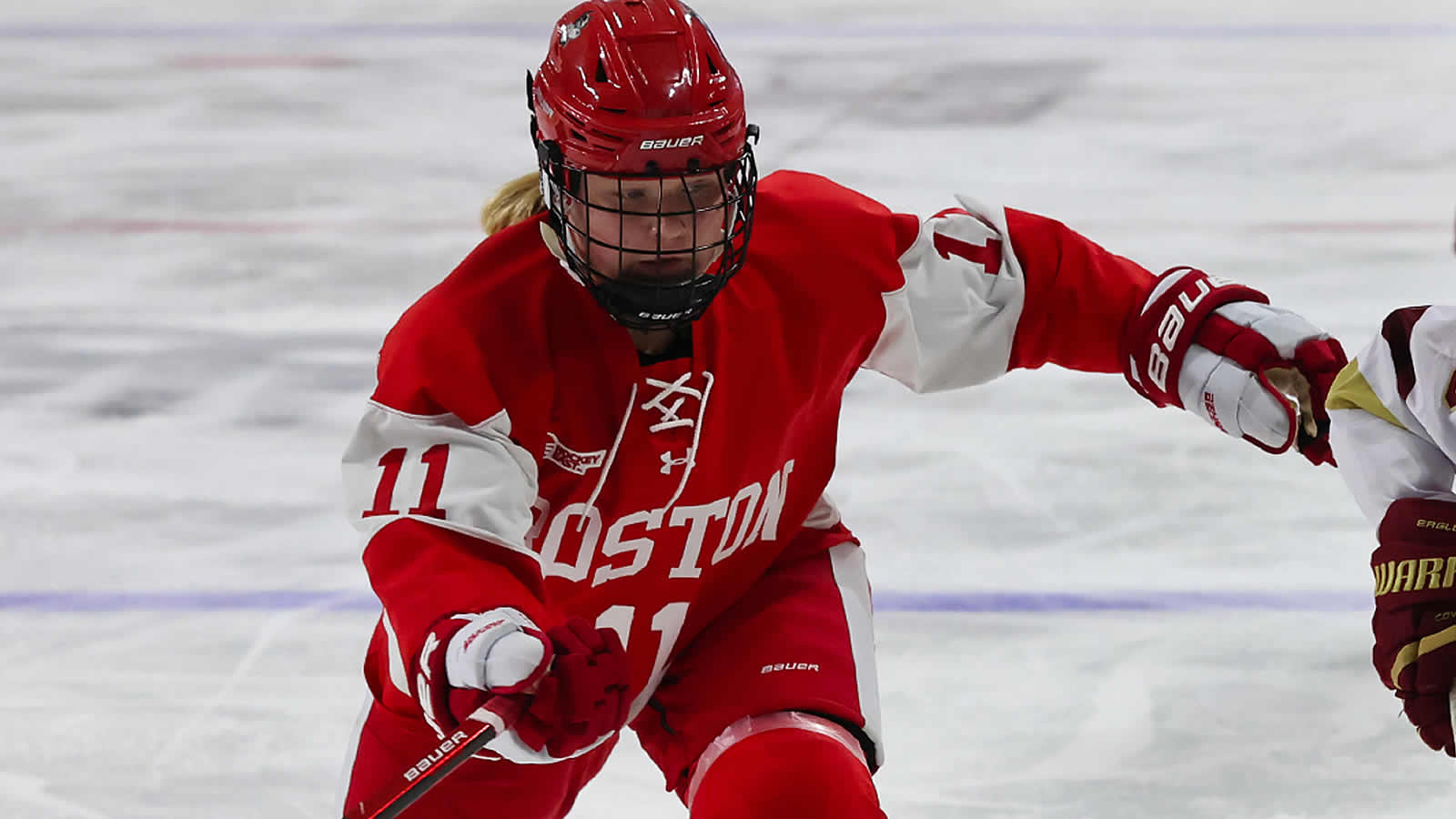 Sydney Healey (Fr., F; Arthur, Ont.) scored a goal in both ends of a home-and-home, split series with Merrimack, including the game-winner on Saturday in a 5-2 victory. 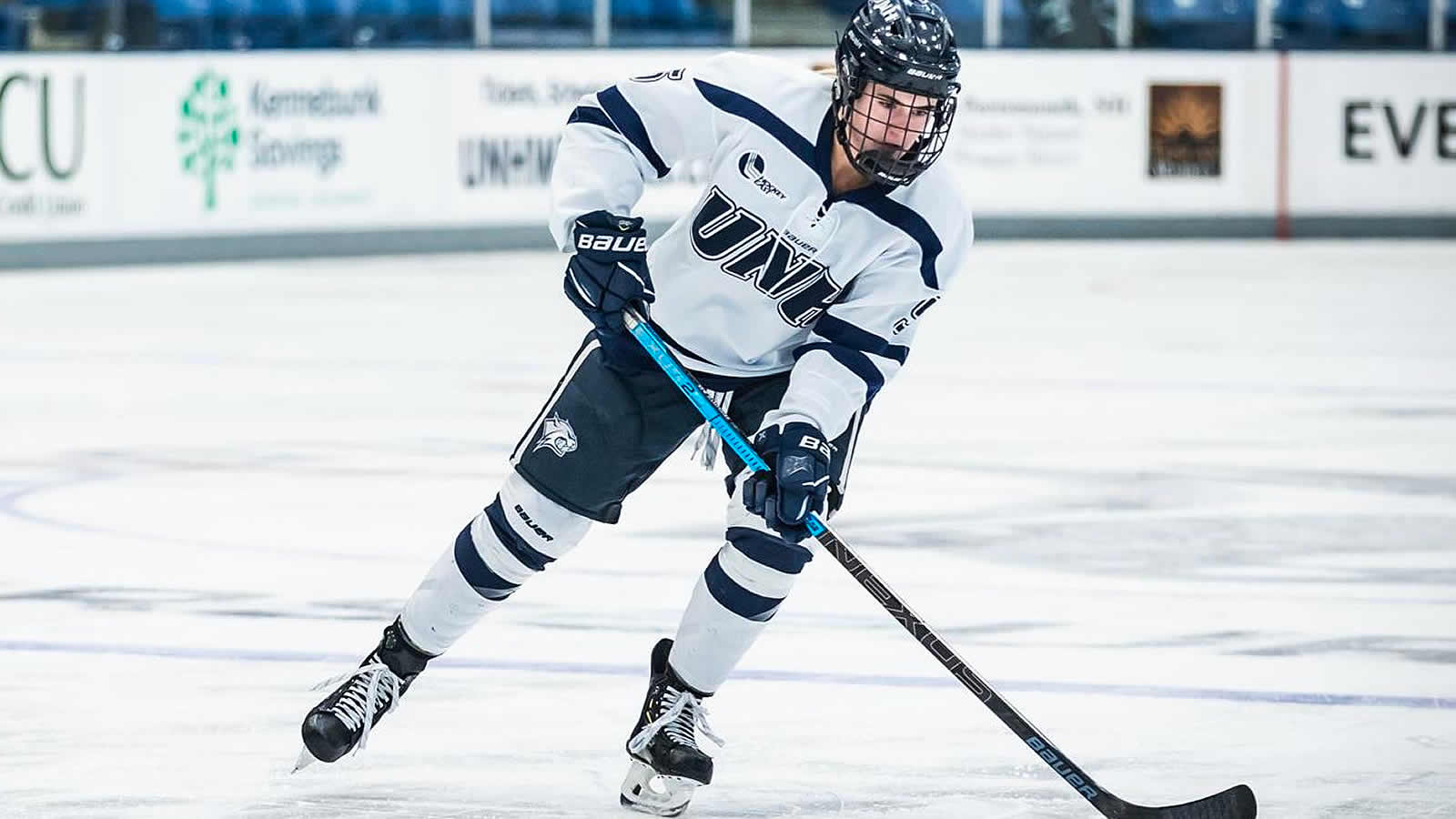 Rae Breton (Jr., D; Brighton, Ont.) recorded a goal and an assist, as well as four blocked shots and a plus-two rating, in UNHâs home-and-home sweep of Holy Cross. Her goal proved the be the game-winning tally in Fridayâs 2-0 win. Breton scored her first goal of the season to give the Wildcats a 1-0 lead late in the first period and then set up the next tally to propel UNH to a 2-0 road win on Oct. 28. She blocked two more shots and had an even rating in Saturdayâs 4-1 win to move into a tie atop the league leader board in blocks for the season. 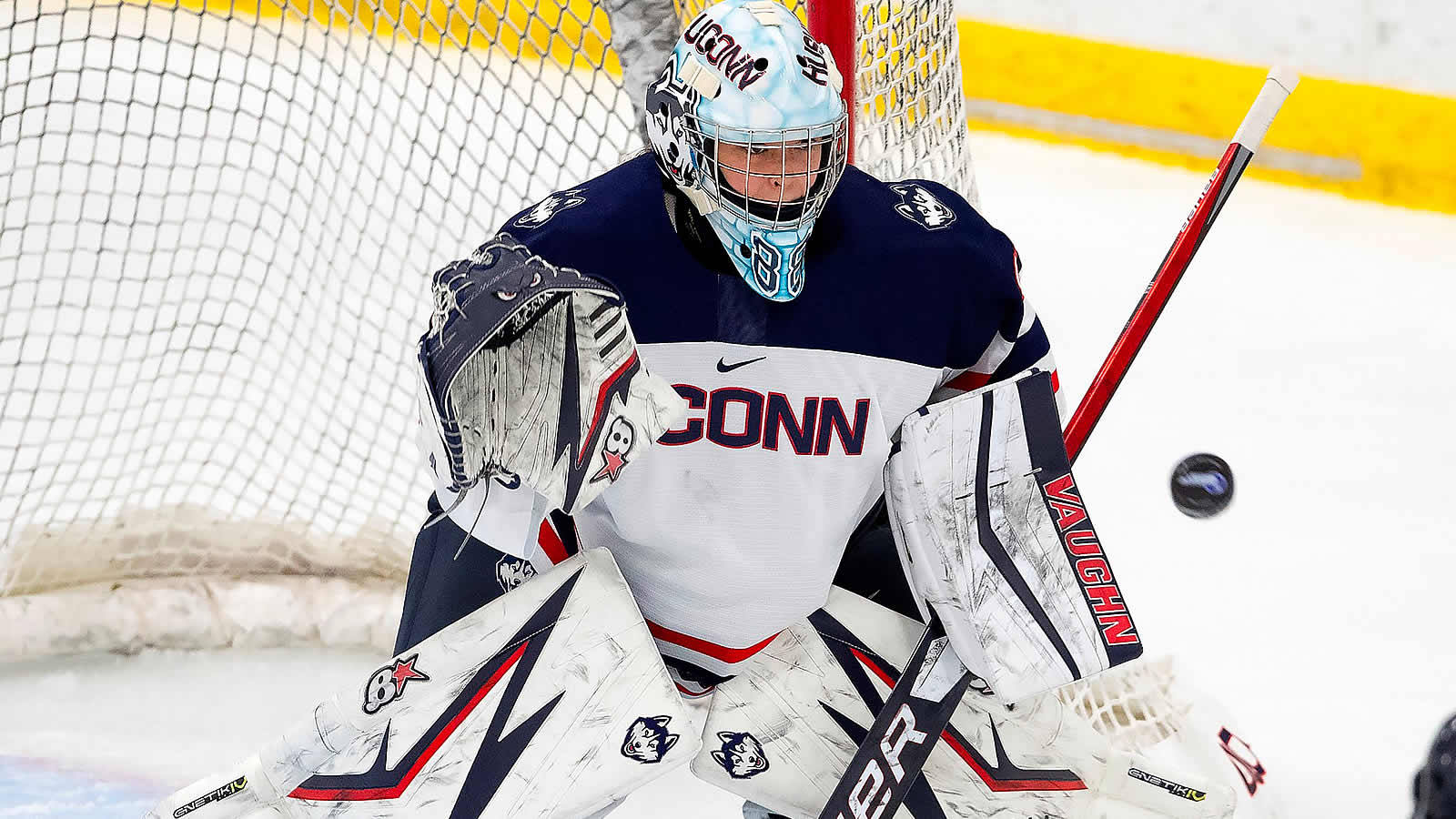 Tia Chan (So., G; Hamilton, Ont.) in two games against the University of Maine, Chan allowed just one goal and made 80 saves. Chan shutout Maine on Saturday afternoon, following a 39-save performance in a 1-0 setback on Friday.

Cayla Barnes, BC (Sr., D; Eastvale, Calif.) Netted one goal and blocked 10 shots over the weekend split at #14 Vermont.

Julia Nearis, BU (Sr., F; Beverly, Mass.) Registed two goals, both on the power-play, in a 5-2 win over Merrimack on Saturday. She added an assist in Fridayâs 5-2 setback.

Claire Peterson, UConn (Sr., D; San Jose, Calif.) Was a part of a UConn defense that held Maine to just one goal across two games. Peterson also pitched in four total blocked shots over the weekend.

Teghan Inglis, MC (Sr., D; Okotoks, Alta.) Found the back of the net against Boston University on Saturday in a 5-2 setback.

Emma Gorski, MC (Sr., G; Wallaceburg, Ont.) Recorded 48 saves on the weekend including 22 in Merrimackâs victory over Boston University on Friday, a 5-2 triumph.

Brianna Brooks, UNH (Jr., F; Whitby, Ont.) Tallied a goal and two assists, a plus-three rating, and blocked one shot in New Hampshireâs sweep of Holy Cross last weekend. She set up both goals in New Hampshireâs 2-0 road win on Friday and scored just 1:23 in Saturdayâs 4-1 win. She won 21 of 35 faceoffs on the weekend.

Nicky Harnett, UNH (Sr., G; Plymouth, Minn.) Stopped 36 of 37 shots to backbone UNH to a weekend sweep of Holy Cross as she went 2-0-0 with a 0.50 GAA, .973 save percentage and one shutout. The one goal against was on a Crusadersâ power play. This marked the first time this season Harnett started back-to-back-games. Harnett made 13 saves to record her first shutout of the season in the 2-0 road win on Friday. She followed that with a 23-save effort in the 4-1 home win; she stopped the first 19 shots of the game before Holy Cross spoiled her shutout bid with a power-play goal at 12:54 of the third period.

Peyton Anderson, NU (Sr., F; Arvada, Colo.) Posted one goal and two assists in a 1-0-1 weekend for Northeastern against #13 Providence. Anderson tallied her second multi-point game of the season, potting a goal and an assist in Fridayâs 4-1 victory.

Abbey Marohn, NU (Jr., D; Saint Joseph, Mich.) Tallied one goal and five blocks over a 1-0-1 weekend for the Huskies. Marohnâs goal on Saturday was the game-tying goal after Northeastern fell behind 1-0 early and the second tally of her career.

Gwyneth Philips, NU (Sr., G; Athens, Ohio) Made 46 saves over a 1-0-1 weekend for the Huskies. Philips posted 13 saves in Fridayâs 4-1 win over #13 Providence. She followed up that performance with a career-high 33 saves in a 2-2 tie with Providence. In the shootout on Saturday, Philips made two saves to secure an extra Hockey East point for Northeastern, additionally, the senior also made a key stop on a PC penalty shot attempt in the first period.