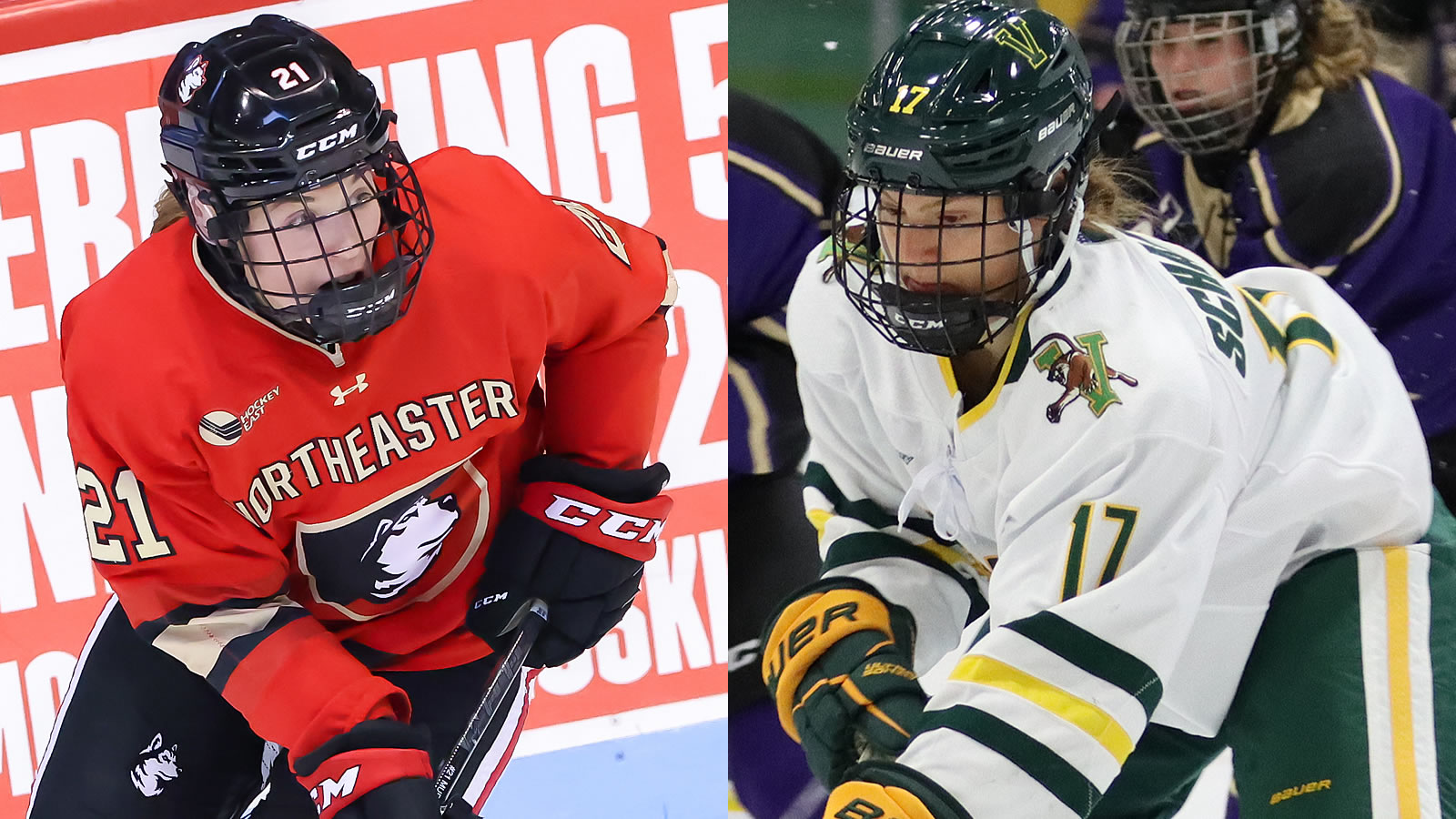 Northeastern won the 2021-22 Hockey East Regular Season Title over the weekend, the Huskiesâ fourth-ever crown. The Huskies search for their record fifth-consecutive Bertagna Trophy as Tournament Champions. On Saturday, Northeastern goaltender Aerin Frankel became the winningest goaltender in Hockey East history, claiming her 71st win in a 2-0 win over Maine. It was her NCAA-leading ninth shutout this season. In the same game, Skylar Fontaine set a new single-season mark for assists by a defenseman with her 26th helper on the year.

Vermont secured home ice in the quarterfinals with a weekend split with BU. Theresa Schafzahl recorded her first career hat trick Saturday scoring three times in UVMâs 5-2 win over the Terriers. On the weekend she had three goals and three assists. The Terriersâ Julia Nearis tallied three points last weekend against Vermont, including the game-winning goal that snapped the Catamountsâ nine-game win streak.

New Hampshire swept Holy Cross in a two-game set thanks in part to Brooke Hammerâs three goals, including both in Fridayâs 2-1 victory. She scored the three goals on four shots and finished the weekend with a plus-three rating.

UConn split a weekend with Providence, as the Huskies also secured a spot on home ice in the quarterfinals. Taylor Wabick was a key player for UConn in a 1-1-0 weekend, scoring a power play goal while also anchoring a Huskiesâ defense with two blocked shots.

Maureen Murphy (Sr., F; Buffalo, N.Y.) posted back-to-back hat tricks as she helped lead Northeastern to a 3-0-0 week. Murphy tallied all three goals in the Huskiesâ 3-0 victory over BU in the Beanpot consolation game. She is currently averaging 0.74 goals per game, the second-best mark in the country, while her 23 goals total lead Hockey East and is the tied for the third-best mark in the NCAA. She has 11 points in her last four games, including eight goals and three assists.

Theresa Schafzahl (Sr., F; Weiz, Austria) recorded her first career hat trick Saturday scoring three times in UVMâs 5-2 win over Boston University that helped the Catamounts secure home ice through at least the quarterfinal round. On the weekend she had three goals and three assists. 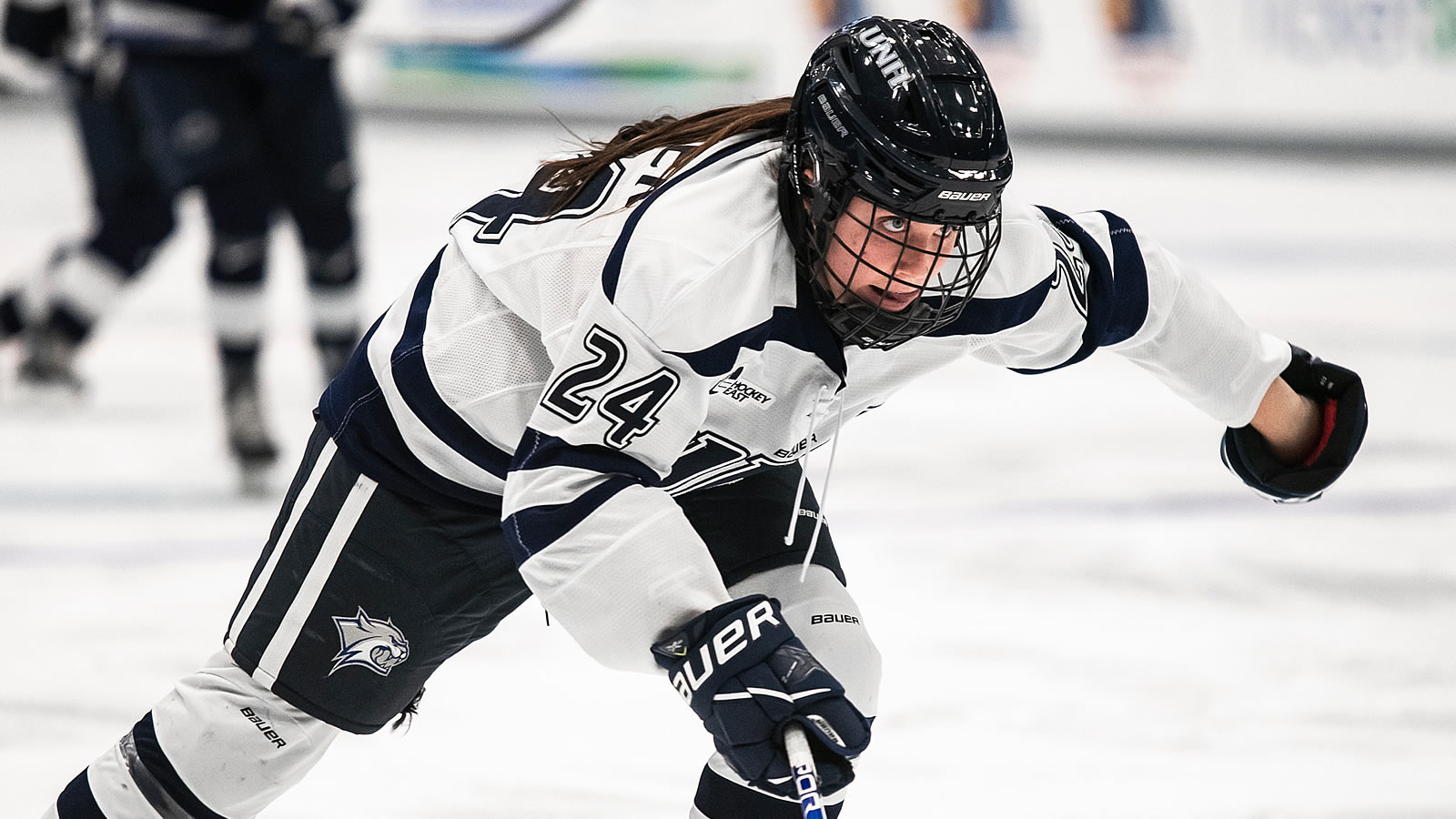 Brooke Hammer (Fr., F; Commerce Township, Mich.) scored three goals, including one game-winning goal, in UNHâs home-and-home sweep of Holy Cross. She scored the three goals on four shots for a .750 shooting percentage and also finished the weekend with a plus-three rating. Scored the Wildcatsâ two goals in Fridayâs 2-1 home win; she tied the score, 1-1, early in the second period and netted what proved to be the game-winning goal at 7:25 of the final frame. It marked her first multiple-goal and multiple-point game of her career. 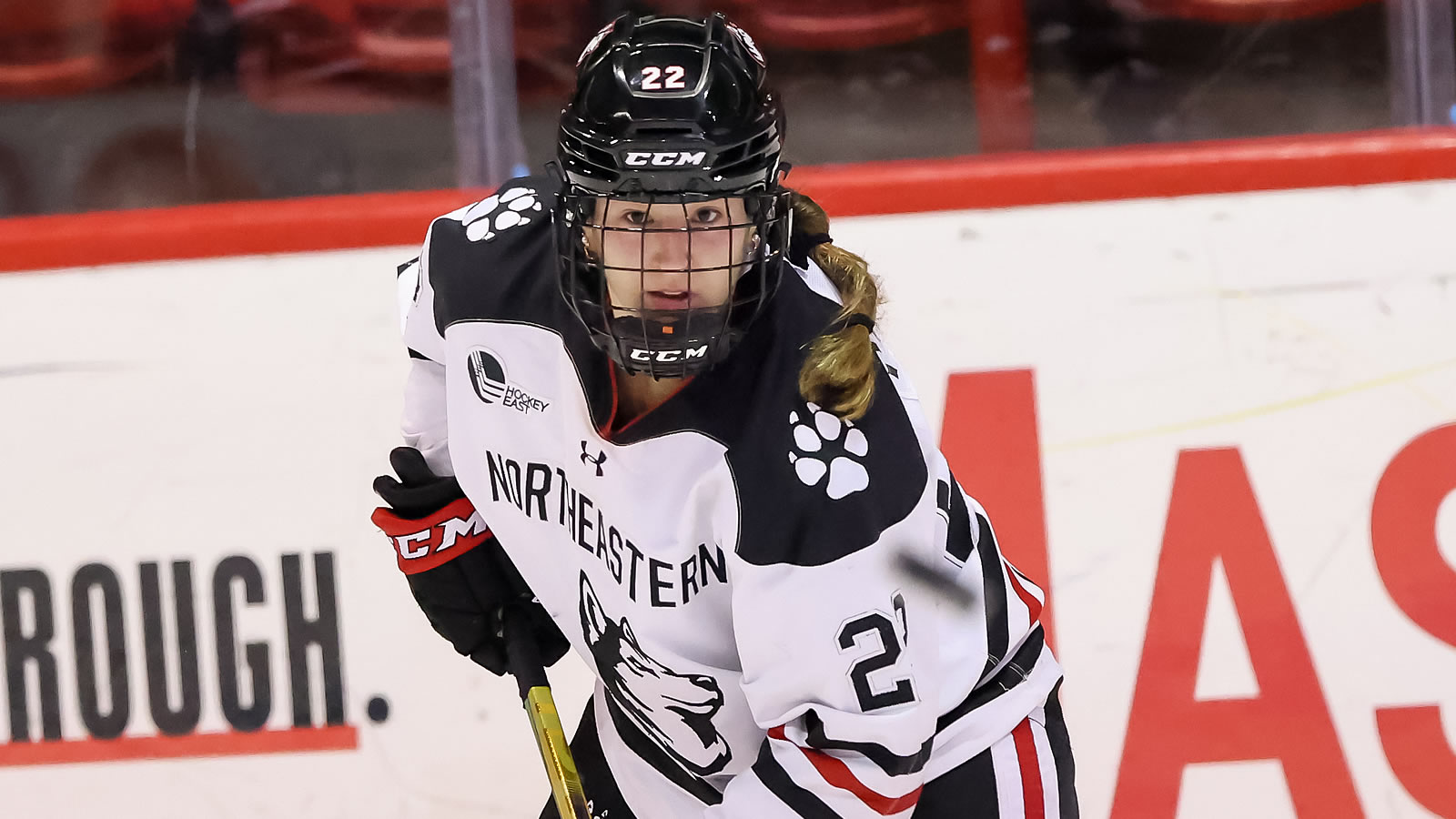 Skylar Fontaine (Gr., D; East Greenwich, R.I.) tallied eight points off one goal and seven assists over the Huskies three wins this week. Fontaine scored the game-winner in the Saturday match up against Maine and has posted four multi-point games in a row. Fontaine has 33 assists on the season, a new career-high, a mark tied for second in the NCAA. 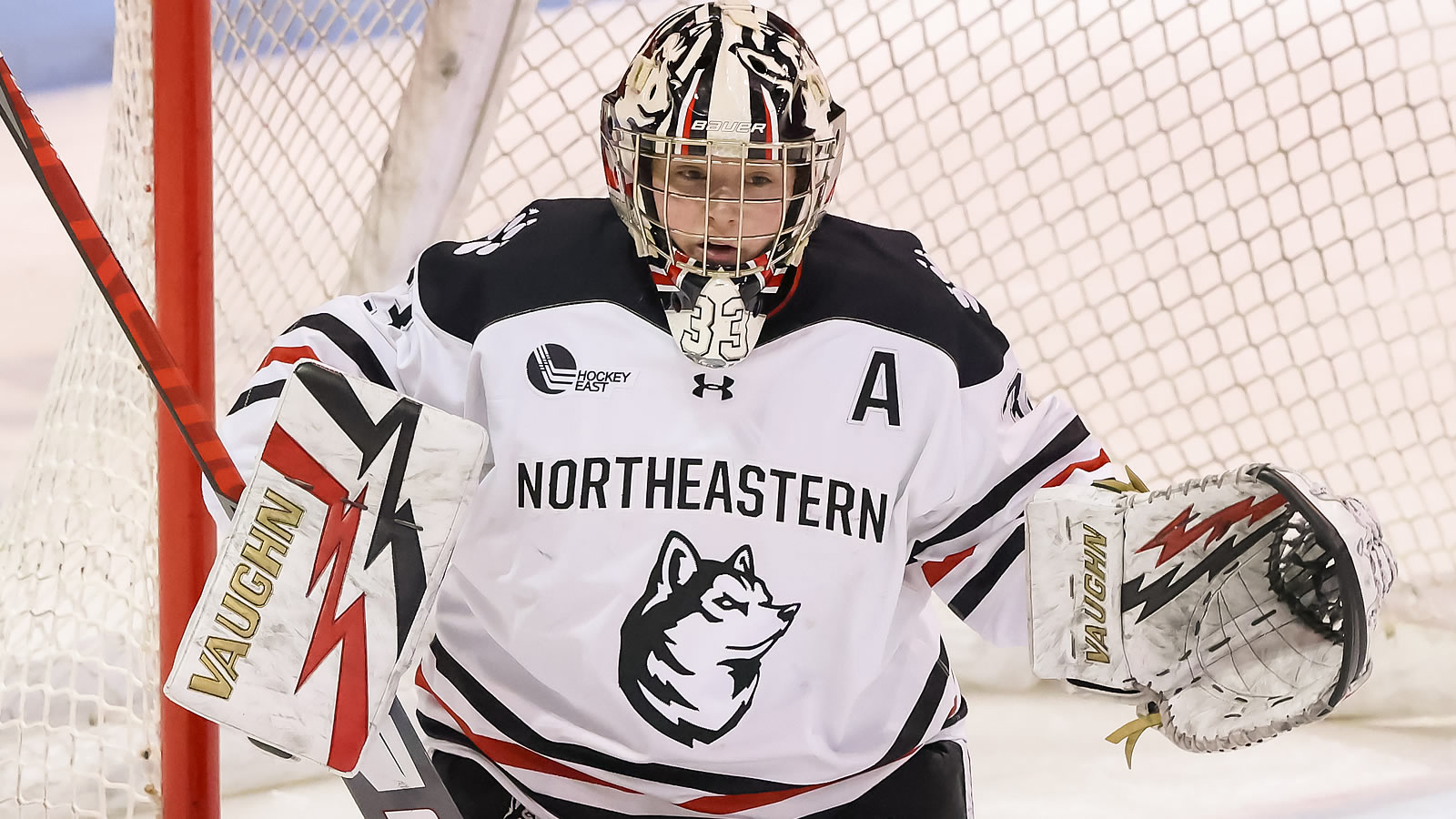 Hannah Bilka, BC (Jr., F; Coppell, Texas) Had a five-point week for BC, recording four points in leading the Eagles back from a three-goal deficit on Friday. She posted a had a hat trick that included a short-handed goal and a game-winning goal and added an assist in that outing and assisted on the game-winning goal in Saturdayâs victory. She led BC with 20 shots on goal on the week and had three blocked shots.

Maddie Crowley-Cahill, BC (So., D; Haverhill, Mass.) Led Boston College with four goals, one on the power play, on the week and added an assist for five points over three games. She scored twice against No. 6 Harvard and added two more goals in BCâs comeback win against Merrimack. She fired 11 shots on goal and was a plus-three with four blocked shots.

Abigail Levy, BC (Sr., G: Congers, N.Y.) Was named the Bertagna Award winner as the top goaltender at the Womenâs Beanpot.

Nadia Mattivi, BU (Jr., D; Baselga di Pine, Trento, Italy) Lit the lamp in both games at Vermont, notching two goals and adding an assist in Fridayâs win for a three-point weekend. She also blocked six shots as part of a complete effort in three games this week.

Nicole McGuigan, BU (Sr., G; Huntington, N.Y.) Making her first career start at No. 5 Northeastern, McGuigan made 34 saves in a valiant effort against the Huskies. She allowed just one even-strength goal and made several key stops to keep BU in the game.

Danika Pasqua, UConn (Sr., F; Langley, B.C.) In a 1-1-0 week for the Huskies, Pasqua scored one goal while having nine shots on goal and pitching in with five blocked shots.

Taylor Wabick, UConn (Gr., D; Winnipeg, Man.) Was a key player for UConn in a 1-1-0 weekend, scoring a power play goal while also anchoring a UConn defense with two blocked shots. Was also part of the defense that only allowed double digit shots on goal in two out of six total periods played.

Samantha Carpentier-Yelle, UConn (Sr., G; Bromont, Que.) Allowed only two goals in two games of work for UConn, posting a 1-1-0 mark. She recorded a 28-save shutout, including a 13-save first period, on Saturday.

Darci Johal, HC (Jr., F; Burnaby, B.C.) Scored a goal in each of the Crusadersâ contests against New Hampshire this week. She brought her team-leading goal total to nine on the year, and has scored a goal in three of the last four games.

Kailey Langefels, HC (Jr., D; Minnetonka, Minn.) Netted her first goal of the year against New Hampshire on Saturday, Feb. 12, while also blocking four shots in that contest. She totaled five blocked shots on the weekend.

Emily Rickwood, UNH (Sr., D; Brantford, Ont.) Recorded two assists, blocked six shots and had a plus-one rating in UNHâs home-and-home sweep of Holy Cross. She matched her career high of two assists in Saturdayâs 5-2 road win. On Saturday, Rickwood set up the first two goals of the game to help give the Wildcats a 2-0 lead they would not relinquish. Her shot from the left point was redirected into the net for a 1-0 lead at 9:24, and then she carried the puck through the neutral zone into the attack zone along the right dashers to set up the second goal at 10:28.

Nicky Harnett, UNH (Jr., G; Plymouth, Minn.) Recorded a 1.50 GAA and .952 save percentage to backbone UNH to a home-and-home sweep of Holy Cross. Two of the three goals against were scored on the power play, including one 5-on-3 advantage. Harnett matched her career high of 37 saves â 12 saves in both the first and second periods followed by 13 in the third â in Fridayâs 2-1 home win. She held the Crusaders scoreless the final 41:57 of the game. She followed that with 23 saves in Saturdayâs 5-2 road win. She stopped all seven shots in the third period as the Wildcats outscored the Crusaders 2-0 in the final frame to secure the weekend sweep.

Kristina Shanahan, UVM (Gr., F; Sainte-Anne-de-Bellevue, Que.) Had three goals and two assists in a two-game weekend series with Boston University, leading the Catamountsâ offense as they secured home-ice in the quarterfinal round.