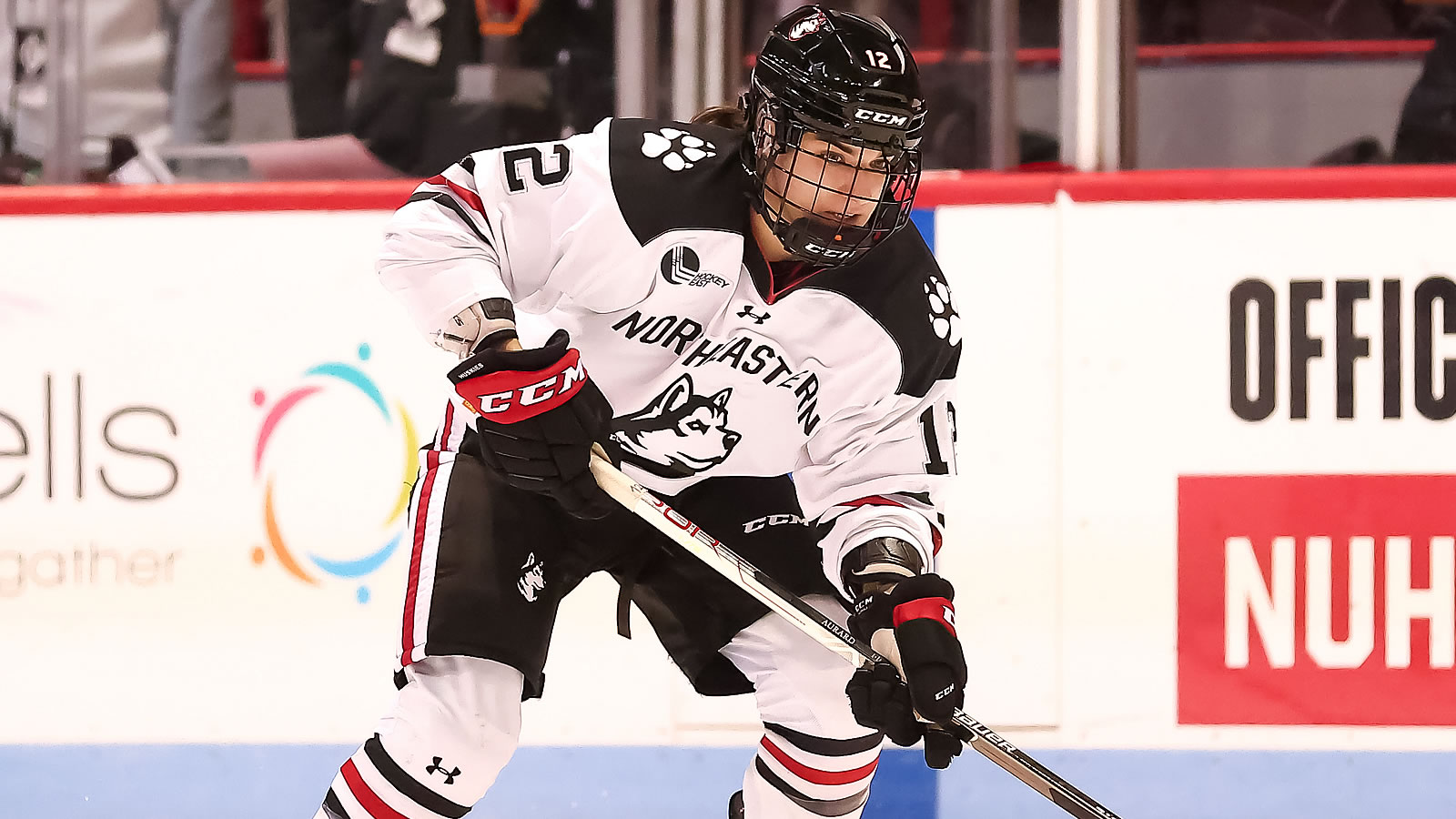 New Hampshire swept Providence, 1-0 and 3-1, to vault from a tie for ninth to fifth in the Army ROTC Hockey East Standings. Junior netminder Nicky Harnett went 2-0-0 with a 0.50 GAA, .938 save percentage, making 59 saves on 60 shots faced, including a 22-save shutout, to backbone the Wildcats.

Vermont earned a weekend split with #10 UConn powered by Reagan Millerâs the first multi-point game of her career Saturday in a 6-2 win. Catamount forward Theresa Schafzahl continued her torrid pace since returning from Olympic qualifying in November. The senior scored three goals on the weekend and has points in nine of UVMâs last 11 contests. Over that stretch she has nine goals and nine assists for 18 points. The day prior, the Huskies earned a 5-1 victory. UConn forward Morgan Wabick scored three goals on eight shots and added one assist the two games.

Northeastern pushed its unbeaten run to 17 straight games dating back to October 13 with a pair of victories over Merrimack. Chloe Aurard posted six points (4g, 2a). In Fridayâs 8-0 victory, Aurard tallied her fourth career hat trick, scoring on the power play, shorthanded and at even strength. Aerin Frankel made 24 saves in her sixth shutout of the season and the goaltender tallied her first career multi-point game, notching two assists.

The womenâs series between Holy Cross and Maine, previously scheduled for Jan. 9-10 at Maine, has been rescheduled for Jan. 10- 11 to allow for proper health and safety protocols. Both games will begin at 2:00 p.m. at Maine.

Chloe Aurard (Sr., F; Villard-De-Lans, France) posted six points as she helped lead the Huskies to a weekend sweep over Merrimack, winning 8-0 at home and 3-1 on the road. In the home victory, Aurard tallied her fourth career hat trick, scoring on the power play, shorthanded and at even strength. At Merrimack, Aurard had one assist and another power-play tally.

PRO AMBITIONS CO-ROOKIES OF THE WEEK 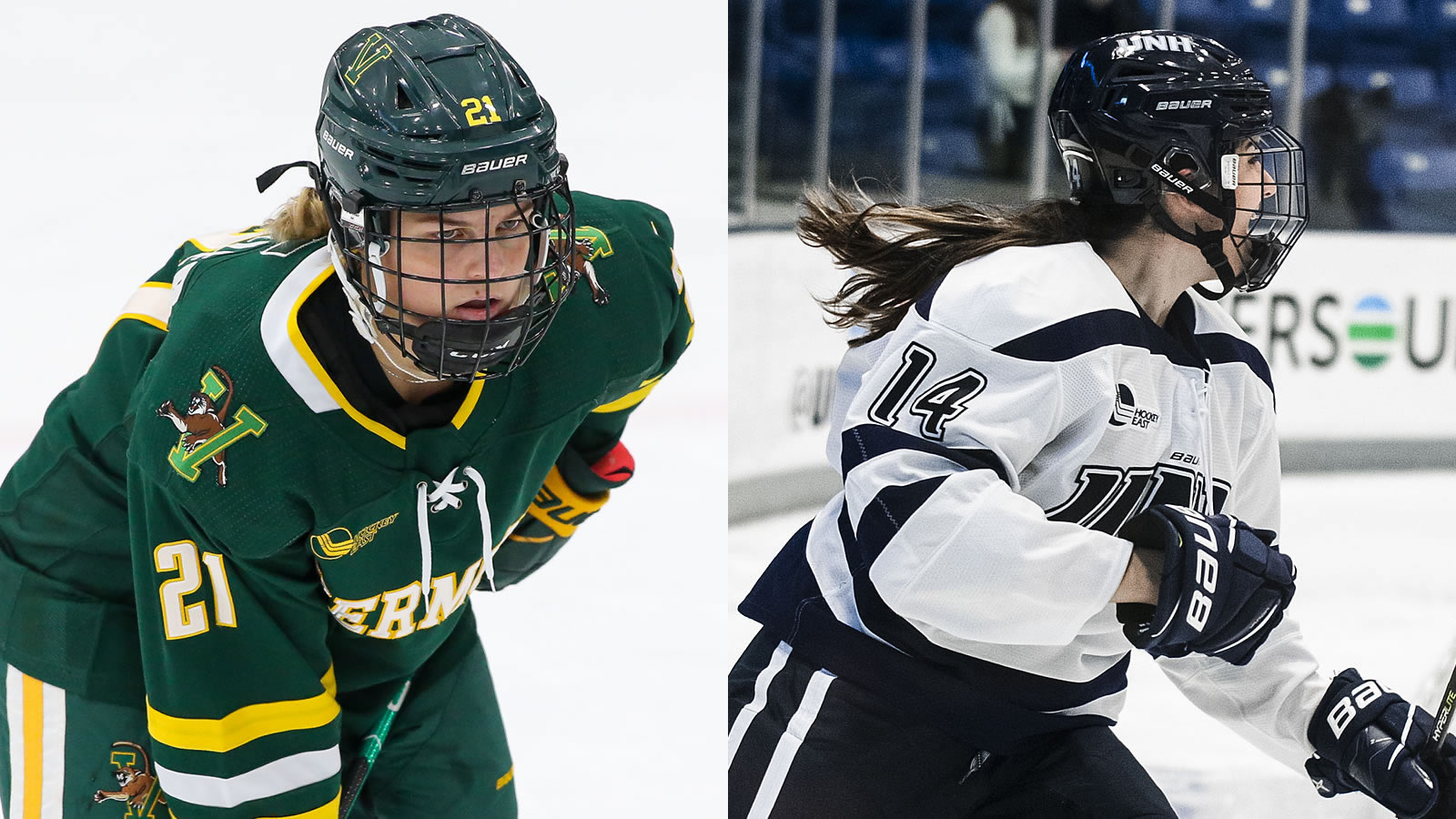 Reagan Miller (Fr., F; Cary, N.C.) posted the first multi-point game of her career Saturday with an goal and an assist in Vermontâs 6-2 win over #10 UConn. The rookie scored her second goal of the season at 7:40 of the second period to give the Catamounts a 2-1 lead before setting up the eventual game-winning strike 3:47 later.

Kira Juodikis (Fr., F: LaSalle, Ont.) recorded two points (1g, 1a) to help UNH sweep Providence, which vaulted the Wildcats into a tie for fifth place in the Army ROTC Hockey East Standings. Her other stats included five shots on goal and two blocked shots. Juodikis recorded her fourth multiple-point game of the season with a goal and an assist in UNHâs 3-1 win Saturday. She broke the scoreless tie at 11:41 of the second period and assisted on the game-winning goal that gave the Wildcats a 1:52 later. 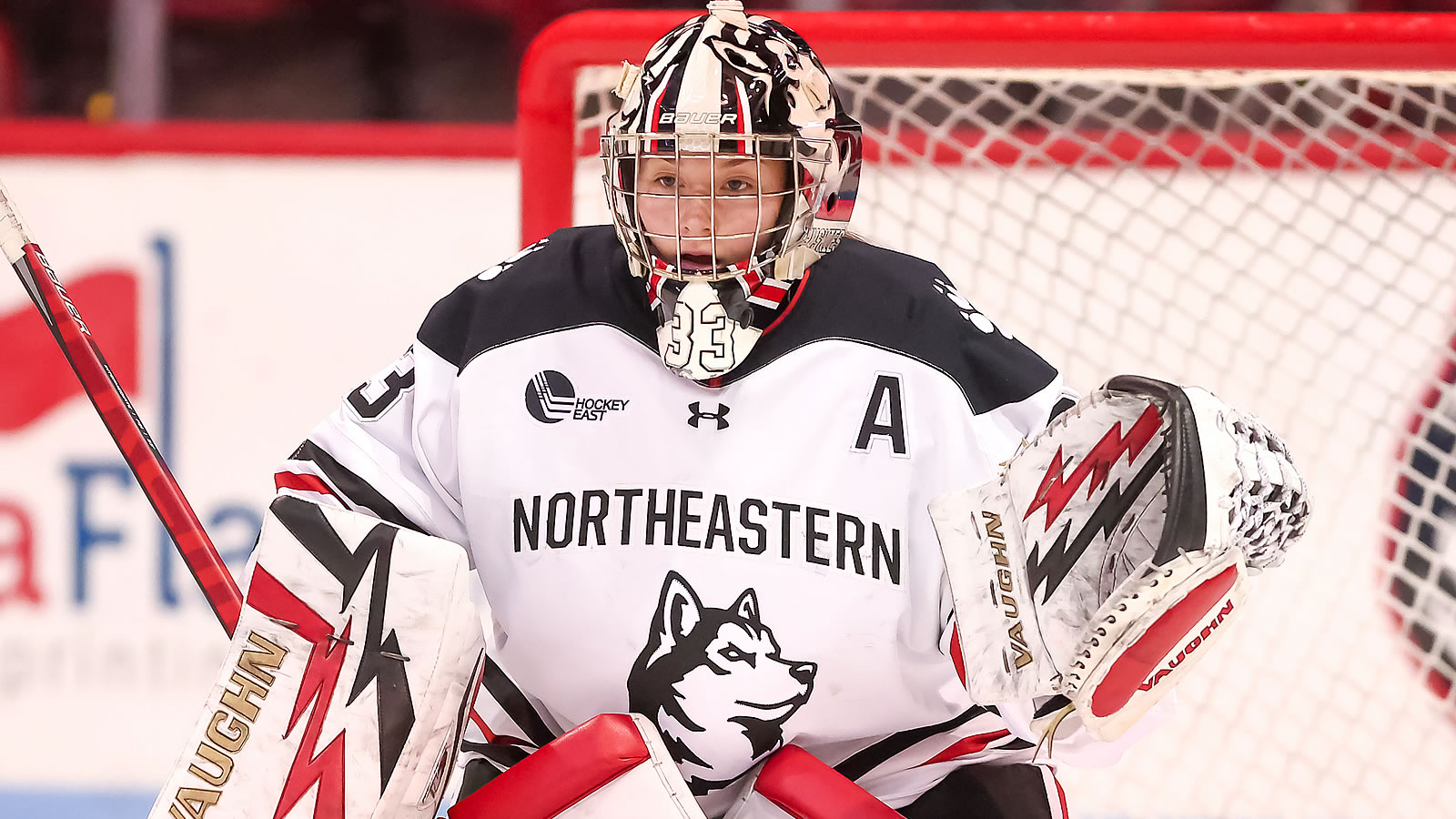 Aerin Frankel (Gr., G; Briarcliff Manor, N.Y.) made 24 saves in her sixth shutout of the season in an 8-0 victory over Merrimack on Friday. Addition- ally, the goaltender tallied her first career multi-point game, notching two assists. 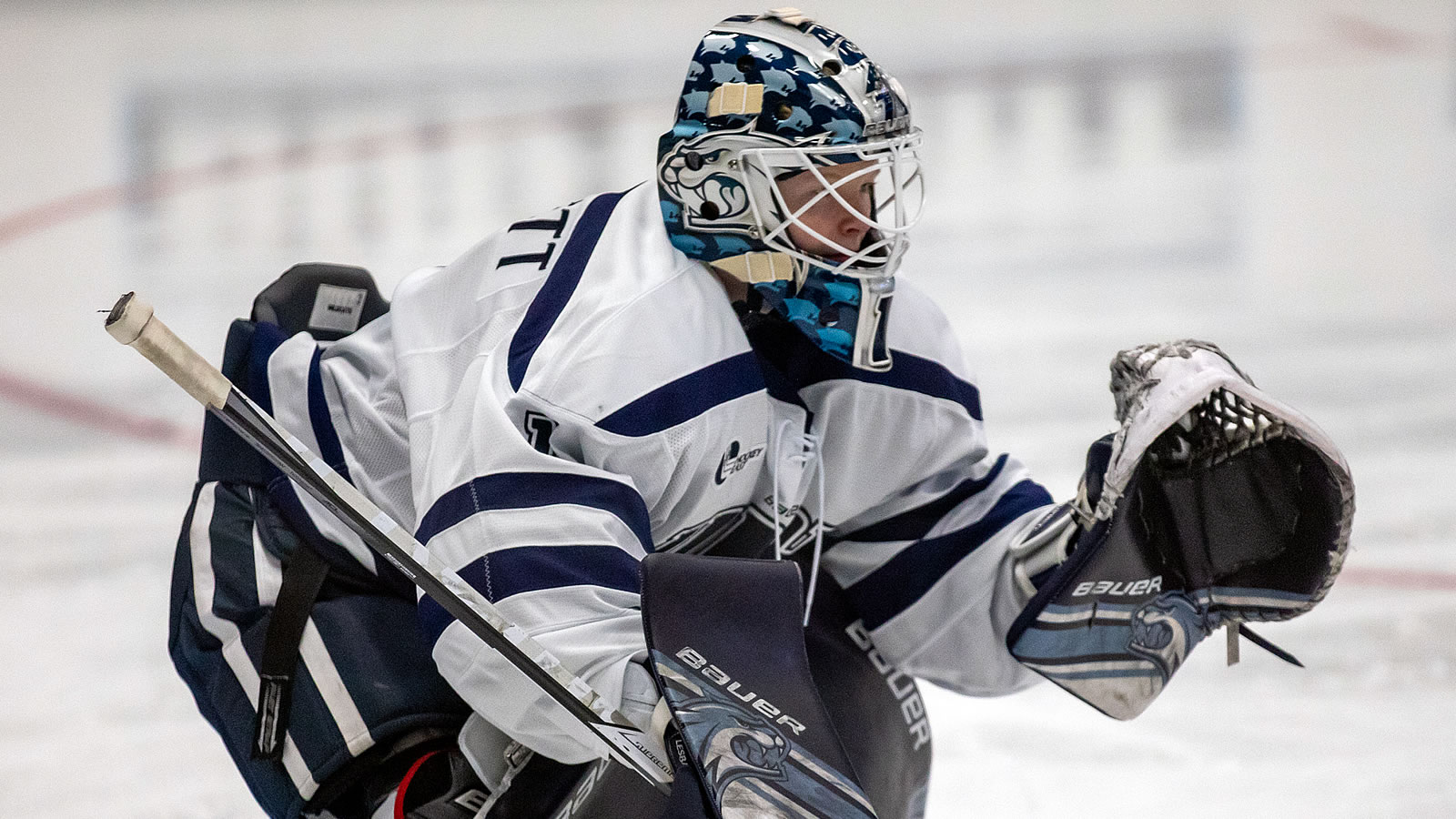 Nicky Harnett (Jr., G; Plymouth, Minn.) went 2-0-0 with a 0.50 GAA, .938 save percentage, making 59 saves on 60 shots faced, including a 22-save shutout, to backbone UNH to a weekend sweep of Providence. Her effort vaulted the Wildcats into a tie for fifth place in the Army ROTC Hockey East Standings after being previously tied for ninth. Harnett recorded her first shutout of the season and third career with a 22-save effort in UNHâs 1-0 win last Friday. She made eight saves in the first period, followed by five in the second and nine in the third. Harnett followed that with a career-high 37 saves the next day in a 3-1 victory. She stopped 15 saves in the scoreless first period and made 13 saves in the scoreless final frame.

Morgan Wabick, UConn (Gr., F; Winnipeg, Man.) Scored three goals on eight shots and added one assist in two games for the Huskies in a weekend split at Vermont. She enjoyed multi-point outings in each of the two games, scoring two tallies in a 5-1 win Friday before dishing out an assist and scoring the next night. Wabick now has seven goals and 11 helpers for 18 points on the year.

Lauren Martin, UNH (Sr., F; Cambridge, Ont.) Martin scored two goals, one in both games of UNHâs two-game series sweep of Providence College. Her other stats included three shots, two blocked shots, a plus-one rating and a .636 winning percentage in the faceoff circle (21 of 33). On Friday, Martin scored the only goal of the game when she broke a scoreless tie with 92 seconds remaining in the third period. She led all skaters with 12 faceoff wins and had a .632 winning percentage (12 of 19); she also blocked two shots. On Saturday, Martinâs goal at 16:23 of the second period was the last of three straight by the Wildcats in a span of 4 minutes, 42 seconds that quickly transformed a scoreless game into a 3-0 lead.

Theresa Schafzahl, UVM (Sr., F; Weiz, Austria) Scored three goals on the weekend as Vermont split a weekend series with #10 UConn. Since returning from Olympic qualifying in November, she has points in nine of UVMâs 11 contests. Over that stretch she has nine goals and nine assists for 18 poi