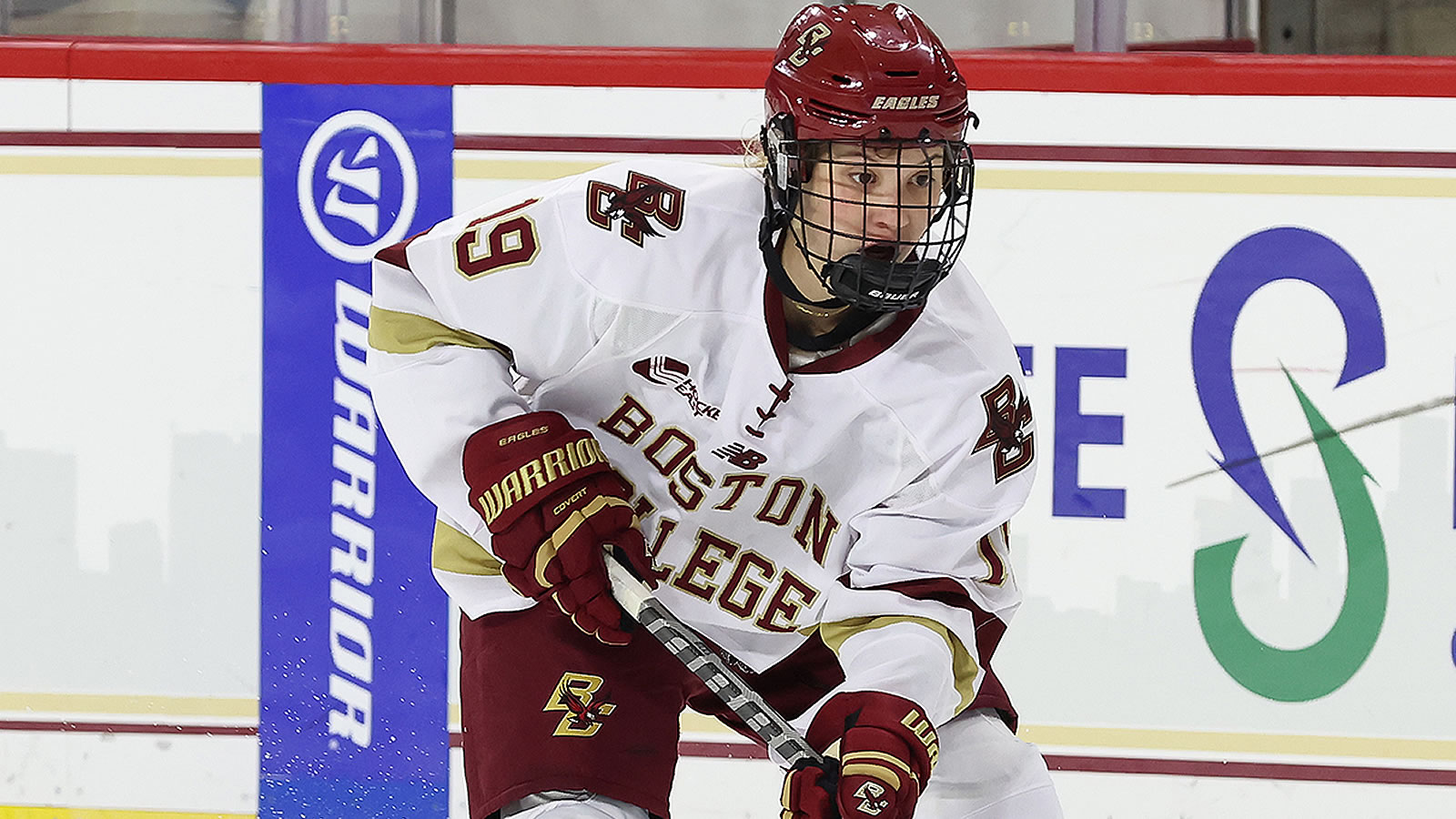 Northeastern swept Cornell to end the first half of the season on a 15-game unbeaten streak. Junior Gwyneth Philips, in just her fourth start of the season, stopped 29 of 30 Big Red shots to earn her third win of the season on Sunday and send the Huskies into the break on a high note.

Boston College ended a three-game skid with a pair of overtime wins against Maine. Hannah Bilka had four points on three goals and one assist, including the overtime game-winner in Fridayâs win and then netted the game-tying goal to force overtime and assisted on the game-winning goal in overtime in Saturdayâs win. Abigail Levy went 2-0-0 on the weekend with a 1.96 goals against average and .940 save percentage. She tallied 39 saves in Saturdayâs overtime win, including 16 saves in the second period and finished the weekend with 63 saves.

UConn swept Holy Cross by a combined score of 8-1 to improve to 14-4-2 on the season and open up a four-point lead over Boston College for third place in the Army ROTC Hockey East Standings. Megan Warrener played every minute in back-to-back wins, allowing just one goal in two games while saving a total of 43 shots, including an 18-save shutout on Friday.

Providence earned two crucial non-league results against Princeton, shutting out the Tigers, 1-0, on Friday. The Friars also won a 3-0 contest over Merrimack on Tuesday. Sophomore Mireille Kingsley appeared in two games for the Friars, making a combined 48 saves. She recorded her first career shutout on Tuesdayâs shutout over the Warriors with 18 saves. She also earned her first career point in the match-up.

Vermont and New Hampshire split a weekend set in Durham. Maude Poulin-Labelle picked up one goal and four assists for the Catamounts and became the programâs all-time leader in scoring for a defenseman with 63 career points.

Hannah Bilka (Jr., F; Coppell, Texas) had four points on three goals and one assist in helping BC to a two-win weekend at Maine. She had a two-goal outing, including the overtime game-winner, in Fridayâs win and then netted the game-tying goal to force overtime and then assisted on the game-winning goal in overtime in Saturdayâs win. She fired six shots on goal and had two blocked shots on the weekend. 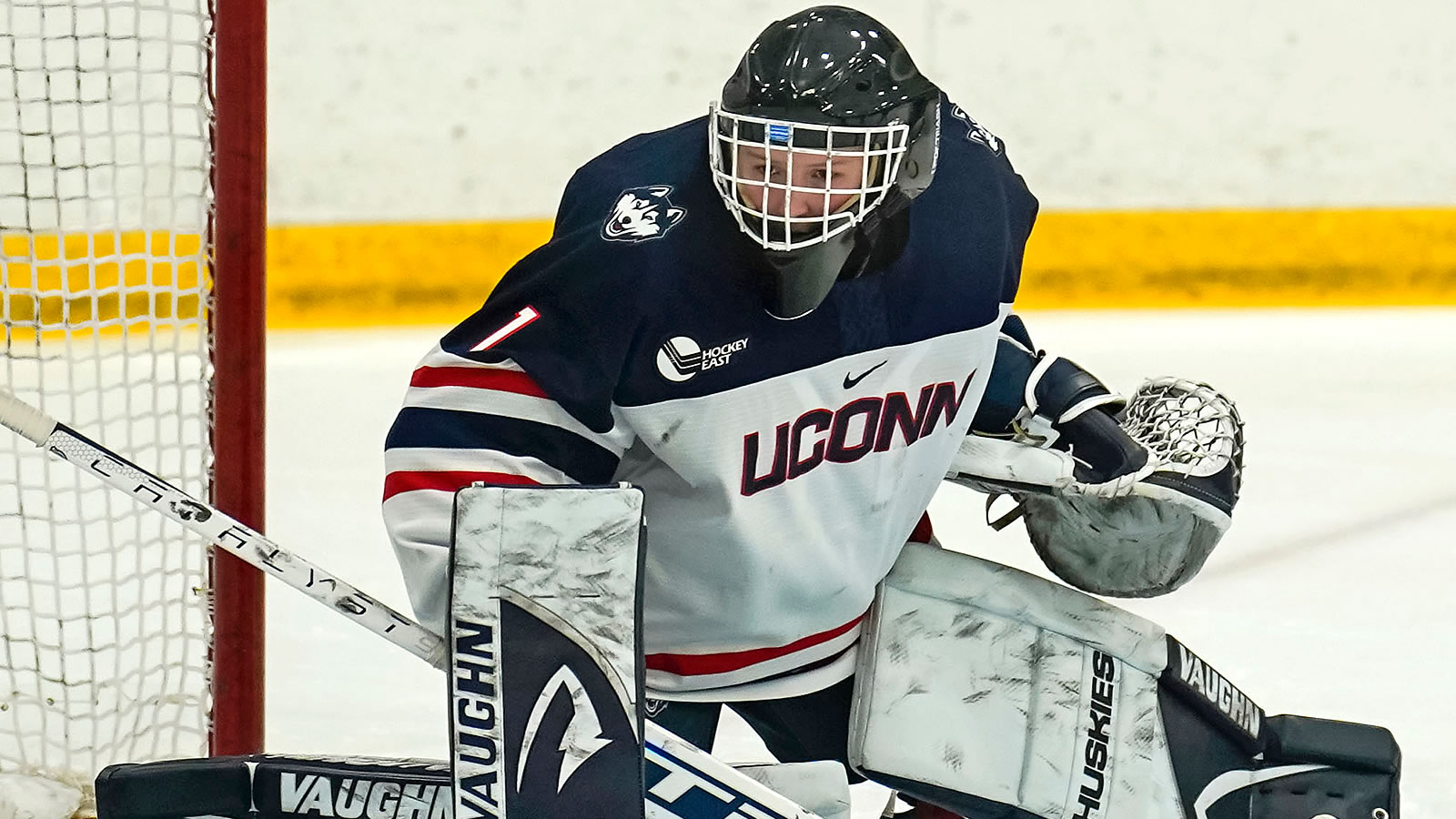 Megan Warrener (Fr., G; Stony Creek, Ont.) played every minute in back-to-back wins over Holy Cross over the weekend. Warrener allowed just one goal in two games while saving a total of 43 shots, including an 18-save shutout on Friday and a season-high 25 saves Saturday at Holy Cross. With the consecutive wins, the rookie improves to 6-1-1 helping UConn moved to 14-4-2 on the year. 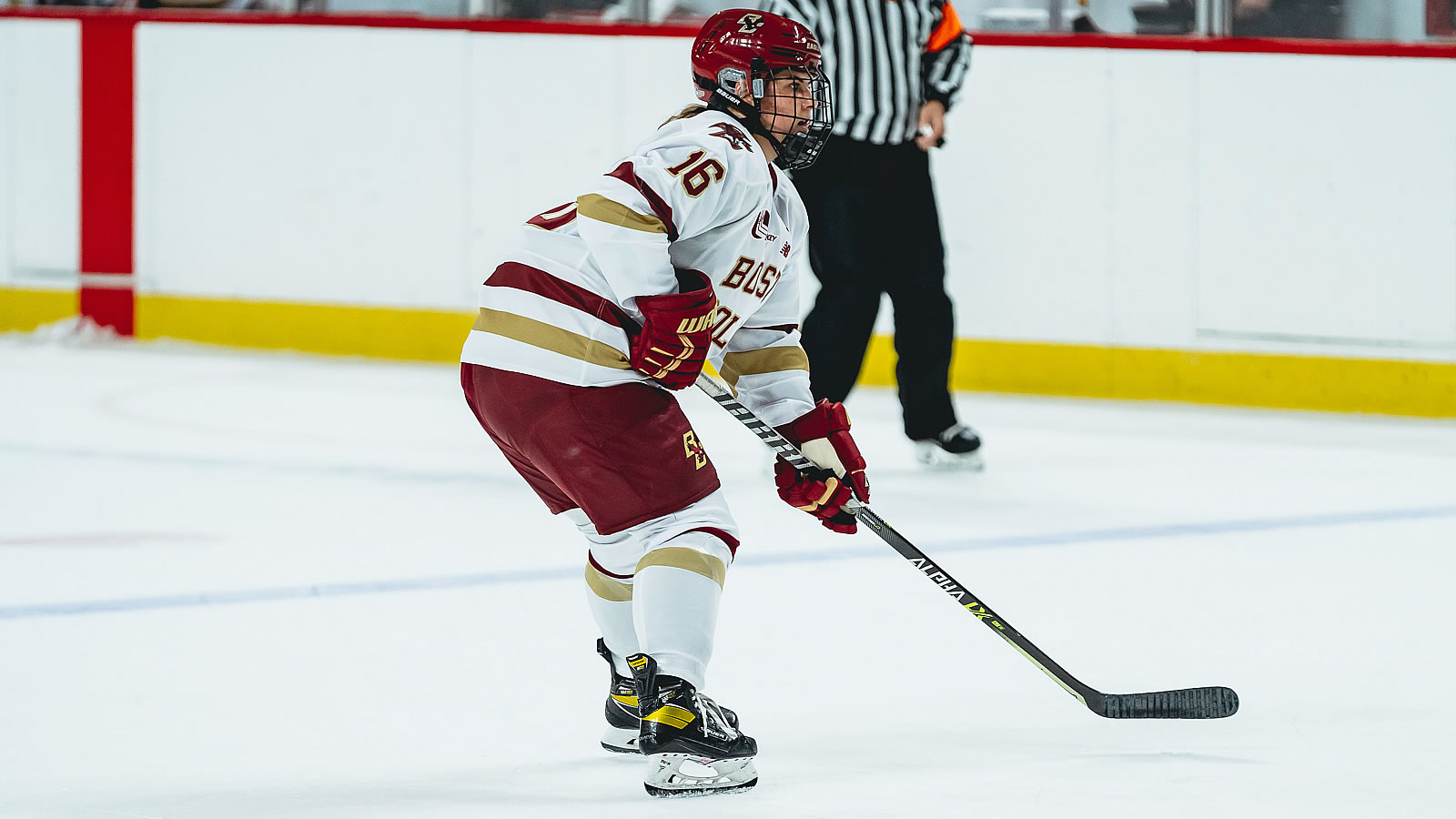 Alexie Guay (Jr., D; Magog, Que.) had one goal and one assist and seven blocked shots in helping the Eagles to a two-win weekend at Maine. Finished with a plus-three rating and four shots on goal. She scored early in Fridayâs win and then assisted on the game-winning goal in overtime. 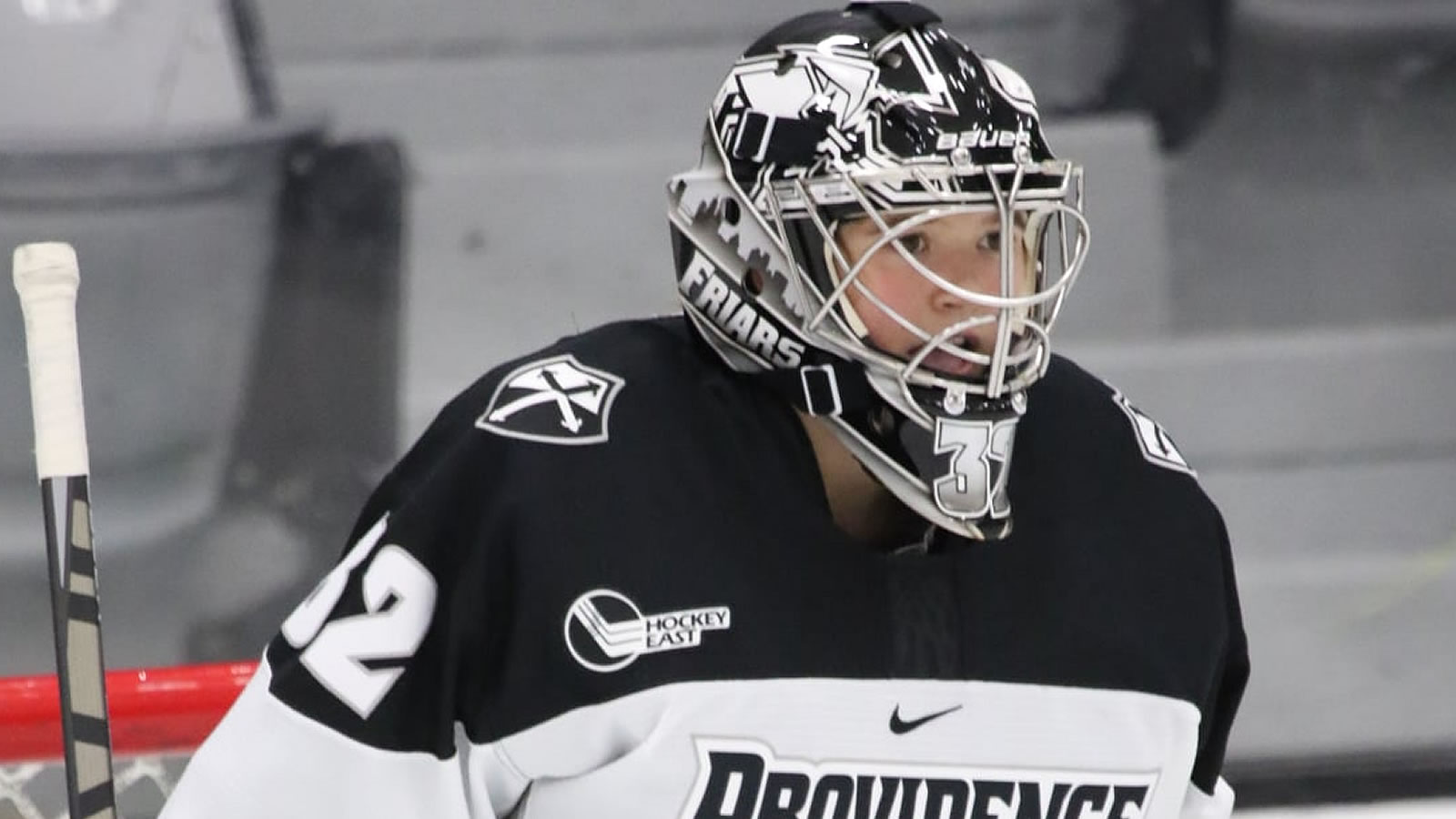 Mireille Kingsley (So., G; Sudbury, Ont.) appeared in two games for the Friars this week, making a combined 48 saves. She recorded her first career shutout on Tuesdayâs win over Merrimack, 3-0, with 18 saves. She also earned her first career point in the match-up, with an assist off of a power-play goal by Bailey Burton. In the 1-1 OT series finale against Princeton, Kingsley recorded 30 saves for a .968 save percentage on the night, including ten saves in the opening period. The Friars skated man-down for the final 1:57 of overtime and Kingsley was able to keep the Tigers off the board, tallying four saves and securing the tie.

Abby Newhook, BC (Fr., F; St. Johnâs, N.L.) Picked up her seventh assist of the year and put a league-leading 15 shots on net.

Abigail Levy, BC (Sr., G; Congers, N.Y.) Went 2-0-0 on the weekend with a 1.96 goals against average and .940 save percentage. She tallied 39 saves in Saturdayâs overtime win, including 16 saves in the second period and finished the weekend with 63 saves.

Courtney Correia, BU (Sr., F: Whitby, Ont.) Led BU with three points thanks to a team-high two goals and one assist in a weekend sweep of Merrimack. She scored the tying goal late in the third period at Merrimack on Friday to force overtime before notching a goal and an assist in a 4-1 win the next day. Correia was a plus-4, blocked two shots and won a team-high 25 faceoffs (59.5%).

Callie Shanahan, BU (Fr., G; Commerce, Mich.) Made 31 saves in the Terriersâ 2-1 overtime win over Merrimack in her lone start of the weekend. Shanahan also stopped a penalty shot to keep BU in the game and set the stage for the comeback win.

Julia Shaunessy, BU (So., D; Marshfield, Mass.) Scored the overtime, game-winning goal on Friday. She finished the weekend as a plus-four with four shots on goal and was part of a defense that allowed just two goals all weekend.

Summer-Rae Dobson, UConn (Gr., F; Huntsville, Ont.) Helped the Huskies improve to 14-4-2 on the season as she scored two goals and added an assist in two games against Holy Cross over the weekend. The successful weekend gives Summer eight goals and four assists for 12 points on the year

Claire Peterson, UConn (Jr., D; San Jose, Calif.) Was an integral part of the UConn Huskies defense that only allowed one goal in two games against Holy Cross. In the back-to-back wins, she scored the opening goal Friday night in a shutout win and added two assists and a blocked shot in a 4-1 victory Saturday on the road.

Ali Beltz, ME (Sr., F; Sleepy Eye, Minn.) Scored a pair of goals in an overtime loss against the Boston College Eagles on Friday, Dec. 3. Her first goal came at the 11:36 mark into the second period, where she scored her teams first goal of the night. Her second goal came with 5:53 remaining in the 3rd as she scored the game-tying goal.

Alyssa Wruble, ME (Fr., F; Bethlehem, Pa.) Scored her fourth goal of the season and her teams lone goal in the 2-1 overtime loss against Boston College on Saturday, Dec. 4.

Chloe Aurard, NU (Sr., F; Villard-de-Lans, France) Returned from an injury to tally a team-high four points on one goal, three assists. Her goal opened up the weekend on the power play, as the first goal of the series with Cornell; two of her assists came in that same game to give her a team-high three points.

Skylar Irving, NU (Fr., F; Kingston, Mass.) The rookie notched a two-point weekend with a goal and an assist; in game one, after the Huskies found themselves down 2-1 in the second, Irving parked herself in front of the net and tipped home a shot from Megan Carter that tied the game and was the start of a three-goal surge as Northeastern downed Cornell 4-2 in game one. Her assist came Sunday in game two, on the third goal in a 3-1 victory.

Skylar Fontaine, NU (Gr., D; East Greenwich, R.I.) Enjoyed another strong offensive week with one goal and two assists; her goal served as the go-ahead, game-winning goal in game one against Cornell, and her assists came one in each contest. She also notched a team-high four blocks on the weekend.

Gwyneth Philips, NU (Jr., G; Athens, Ohio) In just her fourth start of the season, she stopped 29 of 30 Cornell shots on net, to earn her third win of the season. Her numbers were good for a 1.00 goals against average and .967 save per- centage.

Hayley Lunny, PC (Gr., F; Bedford, N.Y.) Recorded three points this week on a goal against Merrimack, and an assist against Princeton on both Friday and Saturday. On Saturday, Lunny assisted on Caroline Petersonâs game-tying goal in the final 51 seconds of play to send the teams into overtime.

Maude Poulin-Labelle, UVM (Sr., D; Sherbrooke, Que.) Picked up one goal and four assists this weekend as UVM split a series with UNH. With two assists on Friday night she became the programâs all-time leader in scoring for a defenseman with 63 career points.