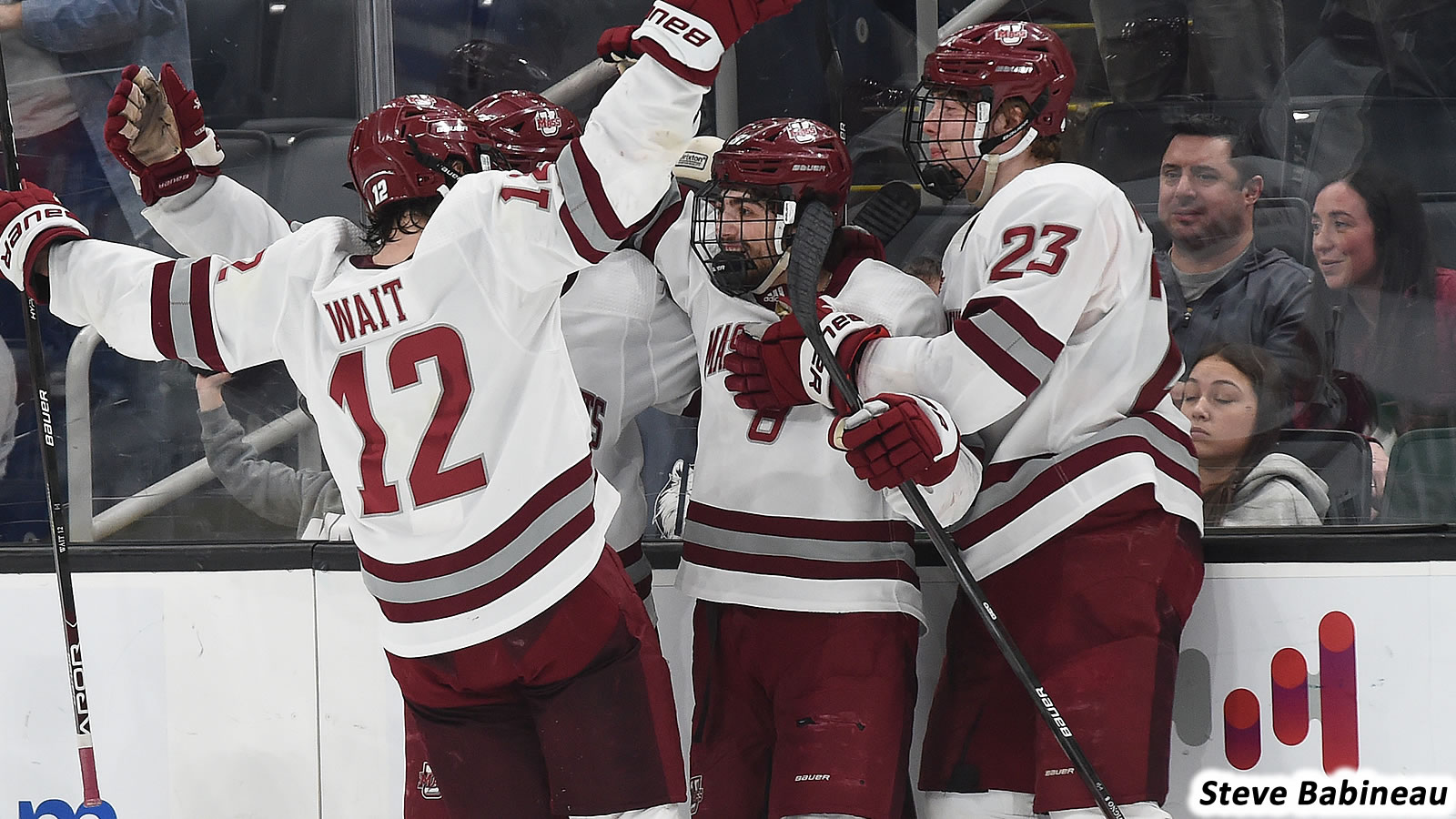 BOSTON - Matt Murray made 22 saves, 12 in the second period, and second-seeded Massachusetts received goals from three different players as the defending champion Minutemen held off third-seeded UMass Lowell, 3-1, in the semifinals of the 37th annual Hockey East Championship Friday night at TD Garden.

UMass (21-12-2) will move to the title game for the second straight season and its fourth time overall, and will meet fourth-seeded UConn Saturday at TD Garden at 7 p.m. (TV-NESN). The Huskies knocked off top-seeded Northeastern, 4-1, in Friday's semifinal lid-lifter.

Friday's second semifinal was a rematch of last year's title game won by the Minutemen, 1-0, at the Mullins Center in Amherst. The semifinals this year returned to TD Garden and the two rivals skated before a large crowd of 13,106 for the doubleheader.

Both goaltenders made key saves early in the first, Murray and Owen Savory for UML before the Minutemen got on the board first at 12:27. UMass cashed in on their first power play opportunity with senior Garrett Wait batting one home in mid-air from the side of the crease. Linemate Josh Lopina and blueliner Scott Morrow picked up helpers on Wait's 12th of the year. Just 1:43 later, UMass forward Bobby Trivigno, the 2022 Hockey East Player of the Year, made it 2-0 with his 18th of the season, ripping one past Savory from the left side with Wait picking up an assist.

After the Minutemen had an 11-6 edge in shots in the first, UMass Lowell increased its attack in the second, out-shooting UMass, 13-2. Murray was sharp to start the period, with six saves in the first eight minutes, keeping the River Hawks off the board. Then at 16:27, freshman Matt Crasa would cut the deficit in half tipping home Nick Austin's drive from the point for his 12th of the year. Only nine seconds later, UML went on the power play but Murray and the Minutemen killed it to skate into the locker room with its 2-1 lead.

The final period was evenly played until UMass junior Jerry Harding was credited with a goal with seven minutes left to make it 3-1. Harding drove to the net and falling to the ice, his shot was stopped by Savory before the rebound was knocked in by a UML defender for a big insurance goal.

Savory, a second-team Hockey East All-Star, finished with 16 saves. UMass Lowell went 0-for-1 with the extra skater while Massachusetts was 1-for-2 in the hard fought but cleanly played game.

The River Hawks fall to 21-10-3 with the loss and will wait to see if they will receive an at large bid to the NCAA Tournament when selections are announced Sunday.

- This was a rematch of the 2020-21 Hockey East Tournament Championship game that UMass won 1-0 at Mullins Center.

- Total attendance for the Hockey East Semifinals at TD Garden was 13,106 -Third time these teams have met in the Hockey East Tournament, with the other meetings being a UMass sweep over UML in the 2004 Quarterfinals, and the 2021 Championship game.

- The second seeded Minutemen are the defending champions after they return to the Hockey East Semifinals for a third straight tournament.

- Bobby Trivigno returns to the Semifinals as last year's William Flynn Tournament MVP, as well as the leading it's leading scorer. He was also named to last year's Steve Nazro All-Tournament team.

- Trivigno extended the UMass lead to 2-0 just 1:43 after Garrett Wait's opening goal in the first period. Trivigno entered the Tournament as the Hockey East Player of the Year and scoring champion, and was recently named a Hobey Baker finalist.

- Jerry Harding was credited with his first goal of the season after a UML own goal on a play where Harding drove hard to the net.

- UMass advances to their second consecutive Hockey East Championship game after their 3-1 victory.

- Third seeded UMass Lowell played in the Semifinals for the 20th time in program history, which ranks third all-time in Hockey East. Their last trip to the final was last season.

- The River Hawks have reached the final six times in the last nine tournaments since 2013.

- No current River Hawk has played in TD Garden in the Hockey East Tournament before tonight.

- Pro Ambitions All-Rookie Team selection Matt Crasa pulled UML within one in the second period. He led all Hockey East rookie forwards in goals this season with seven. 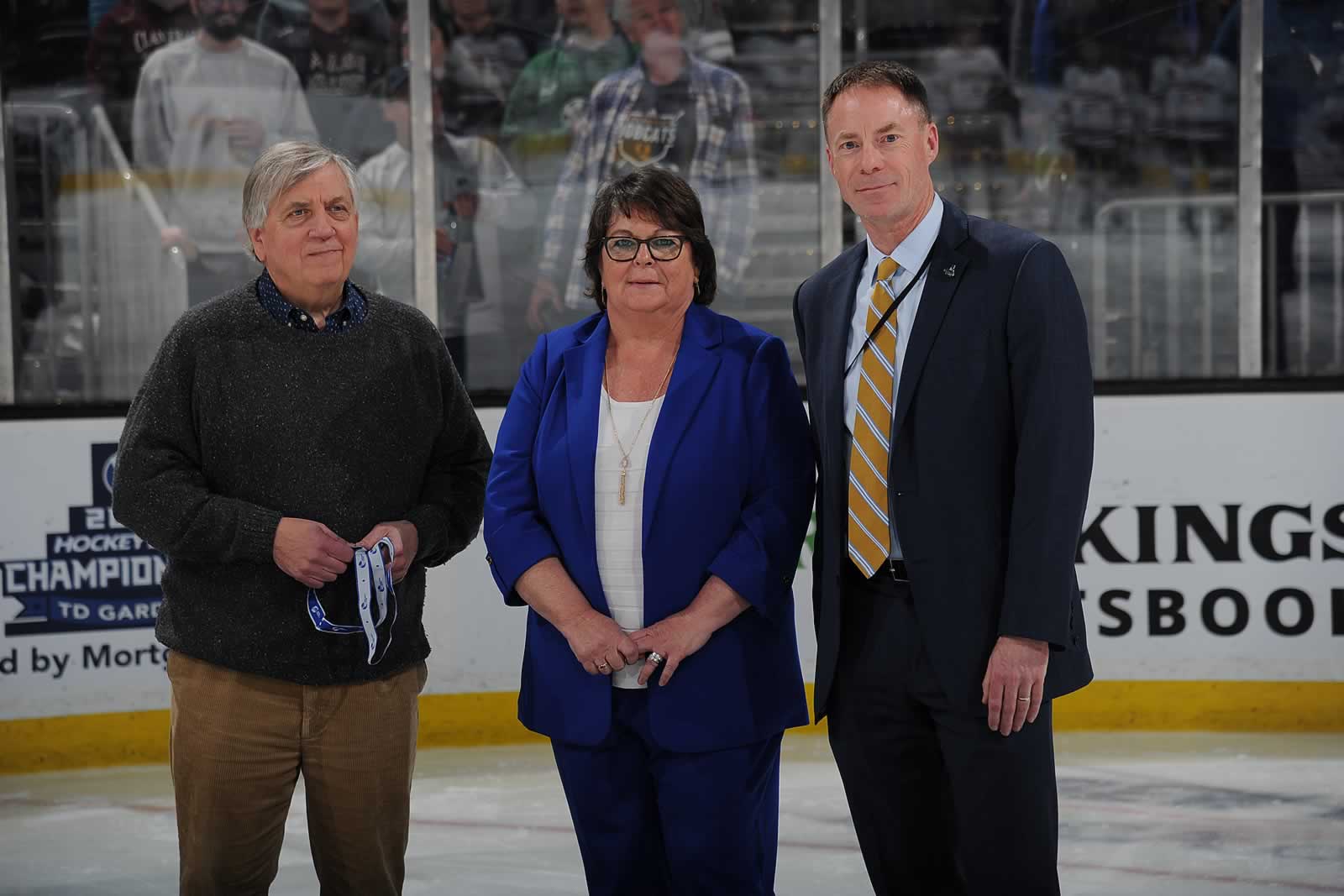 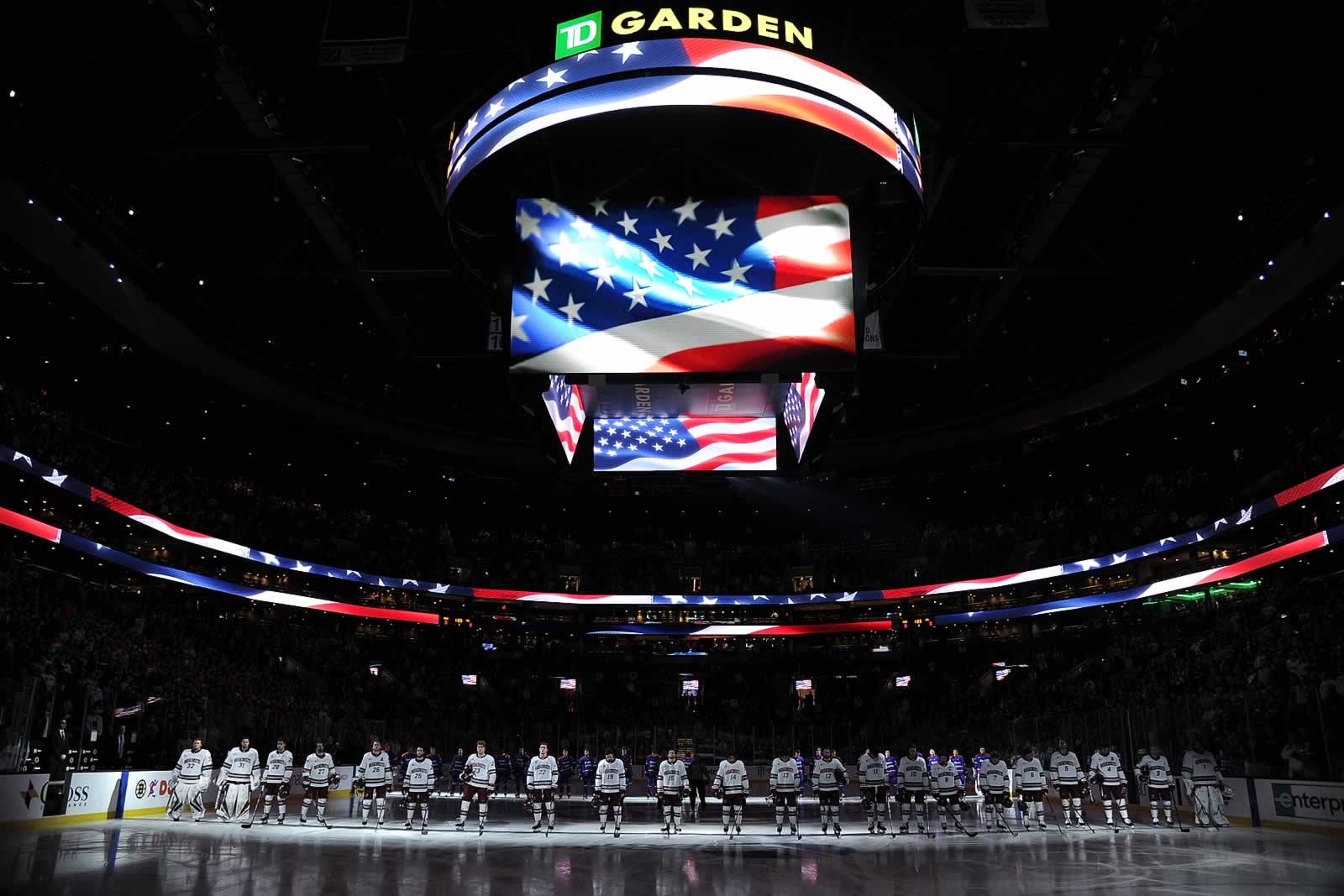 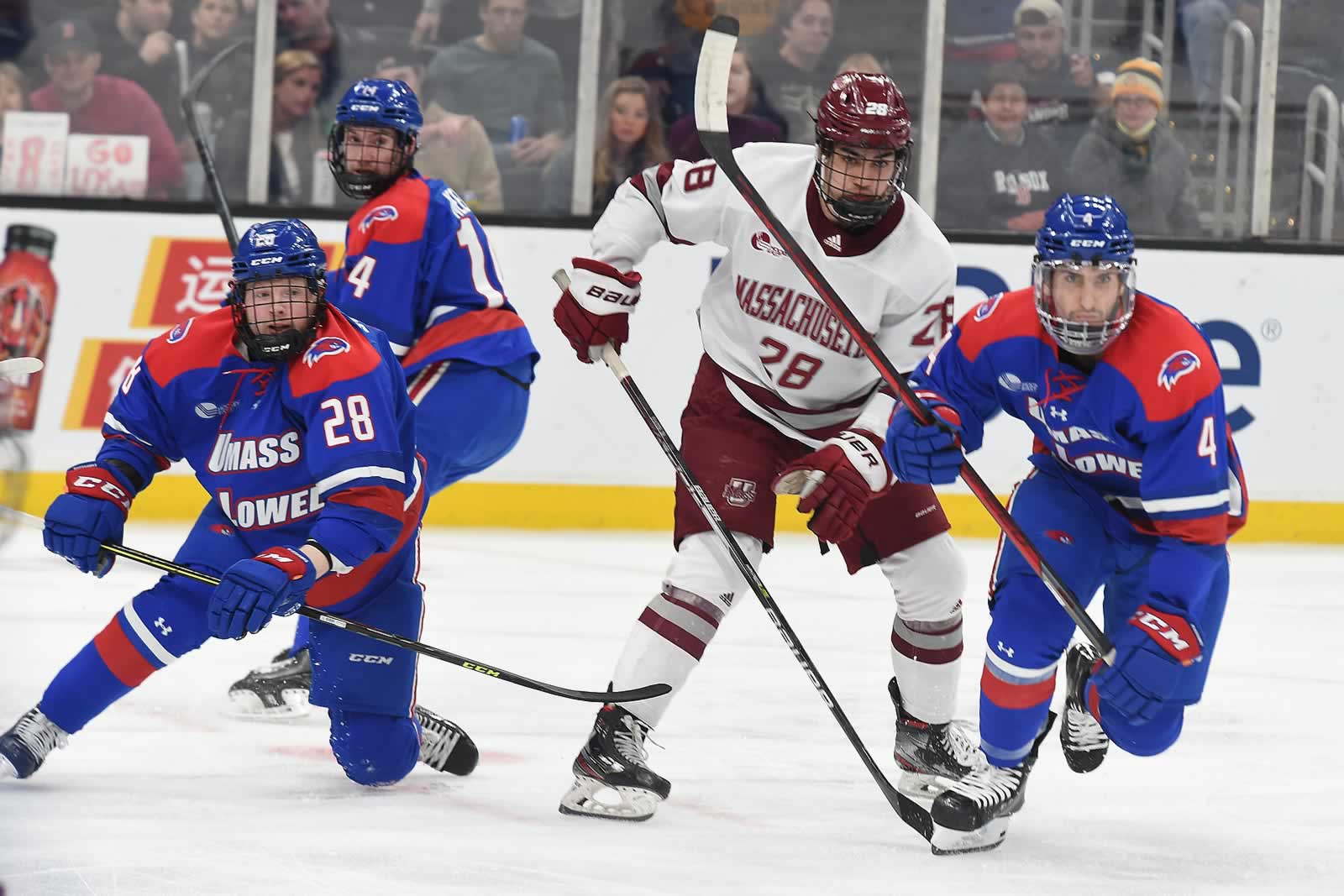 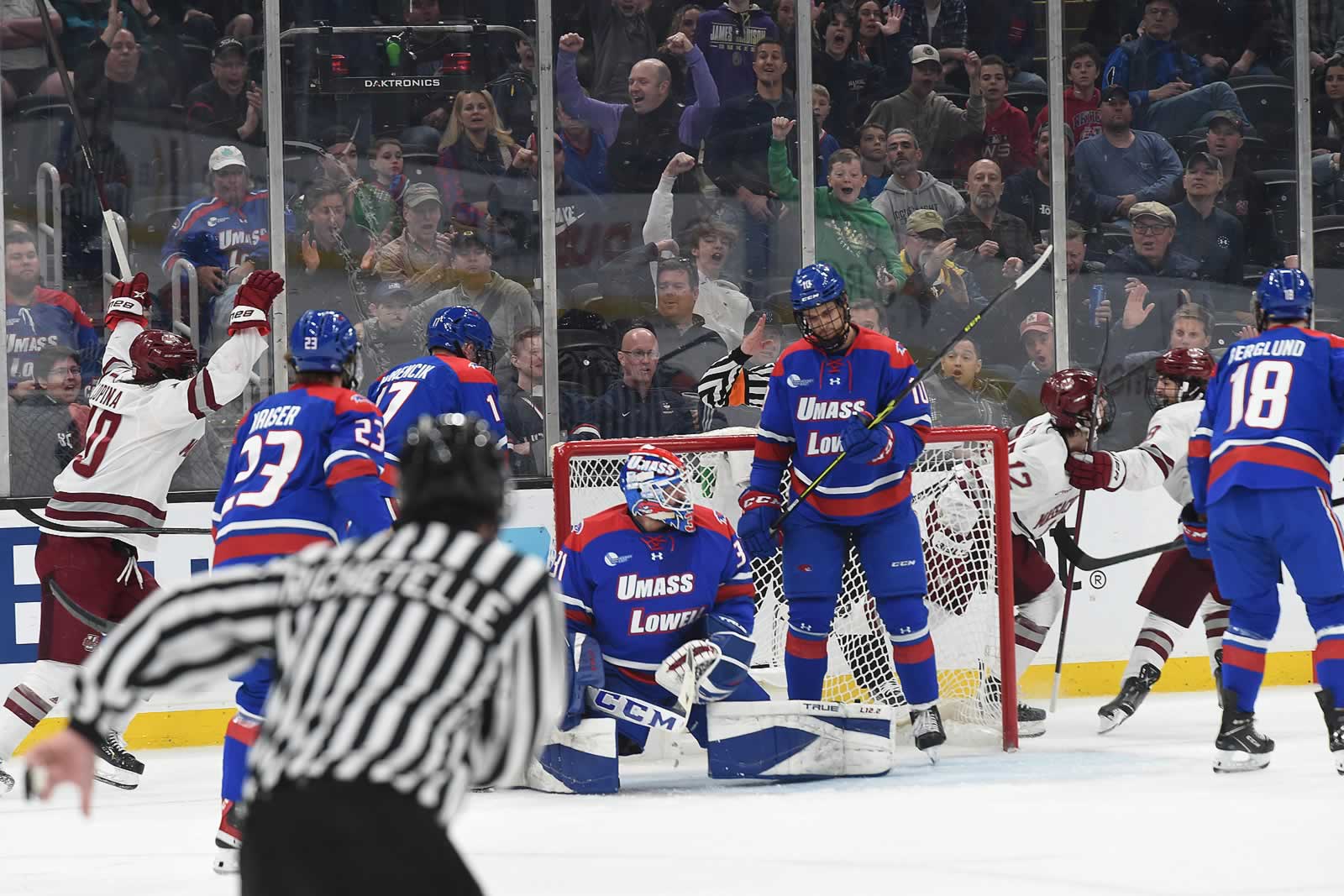 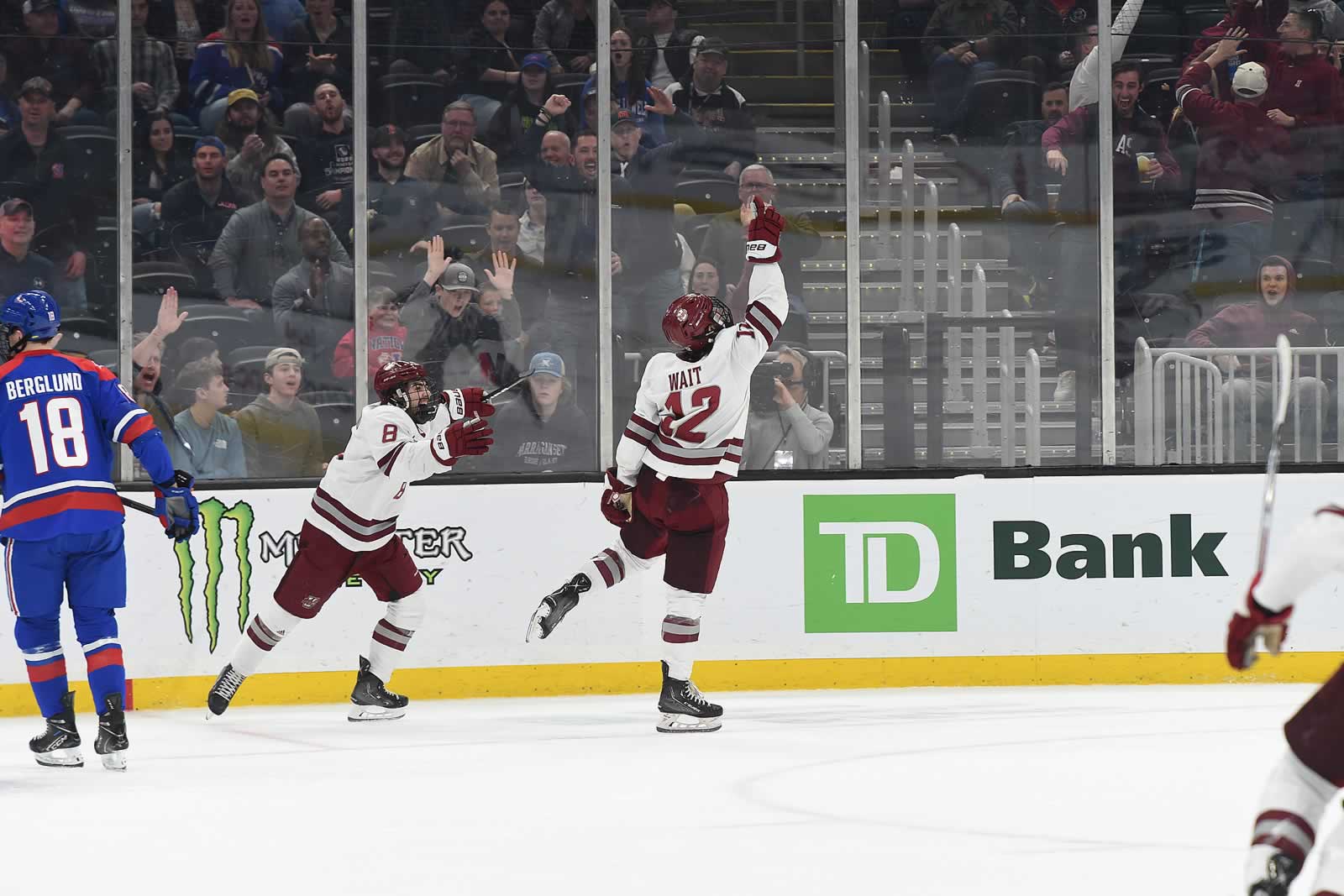 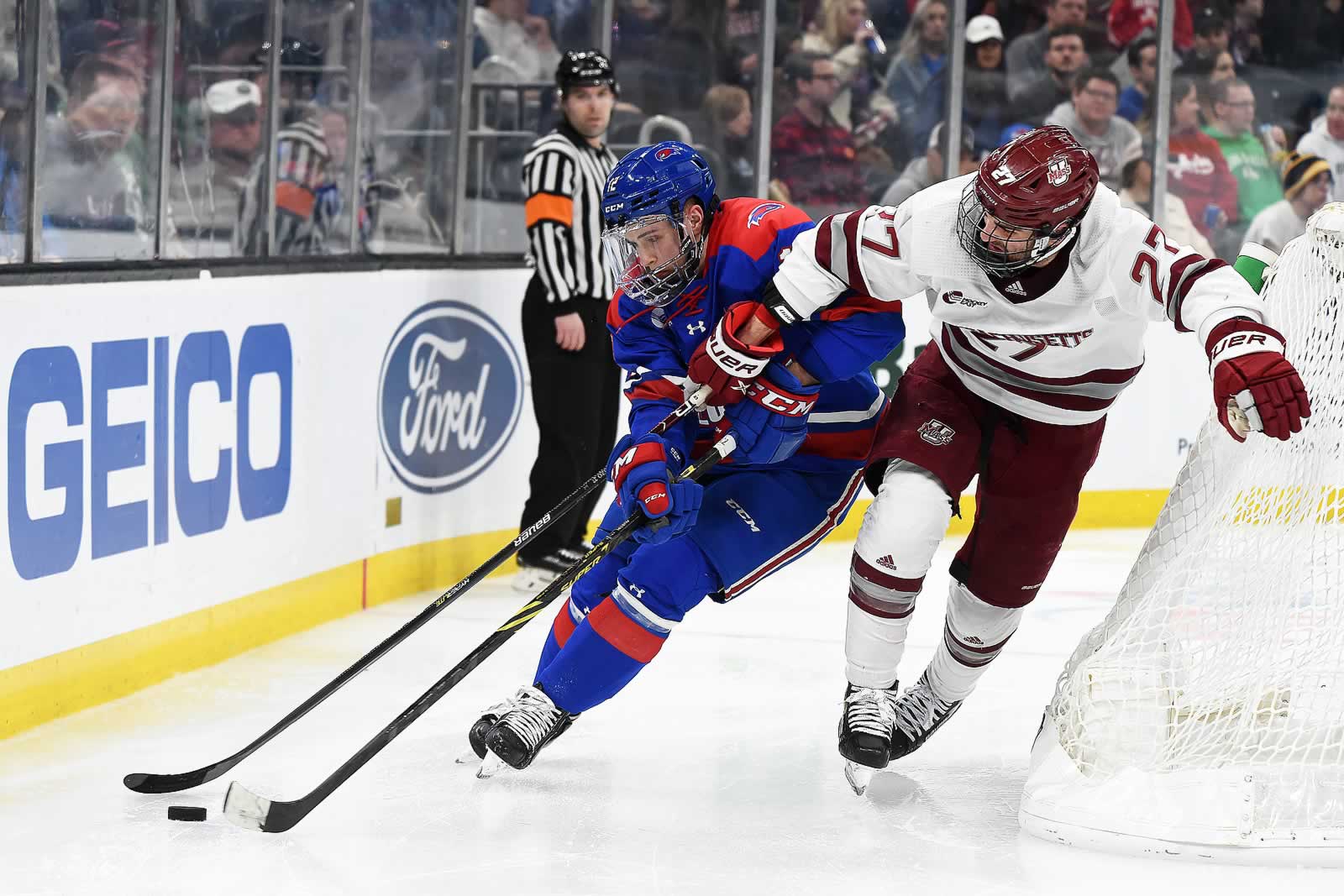 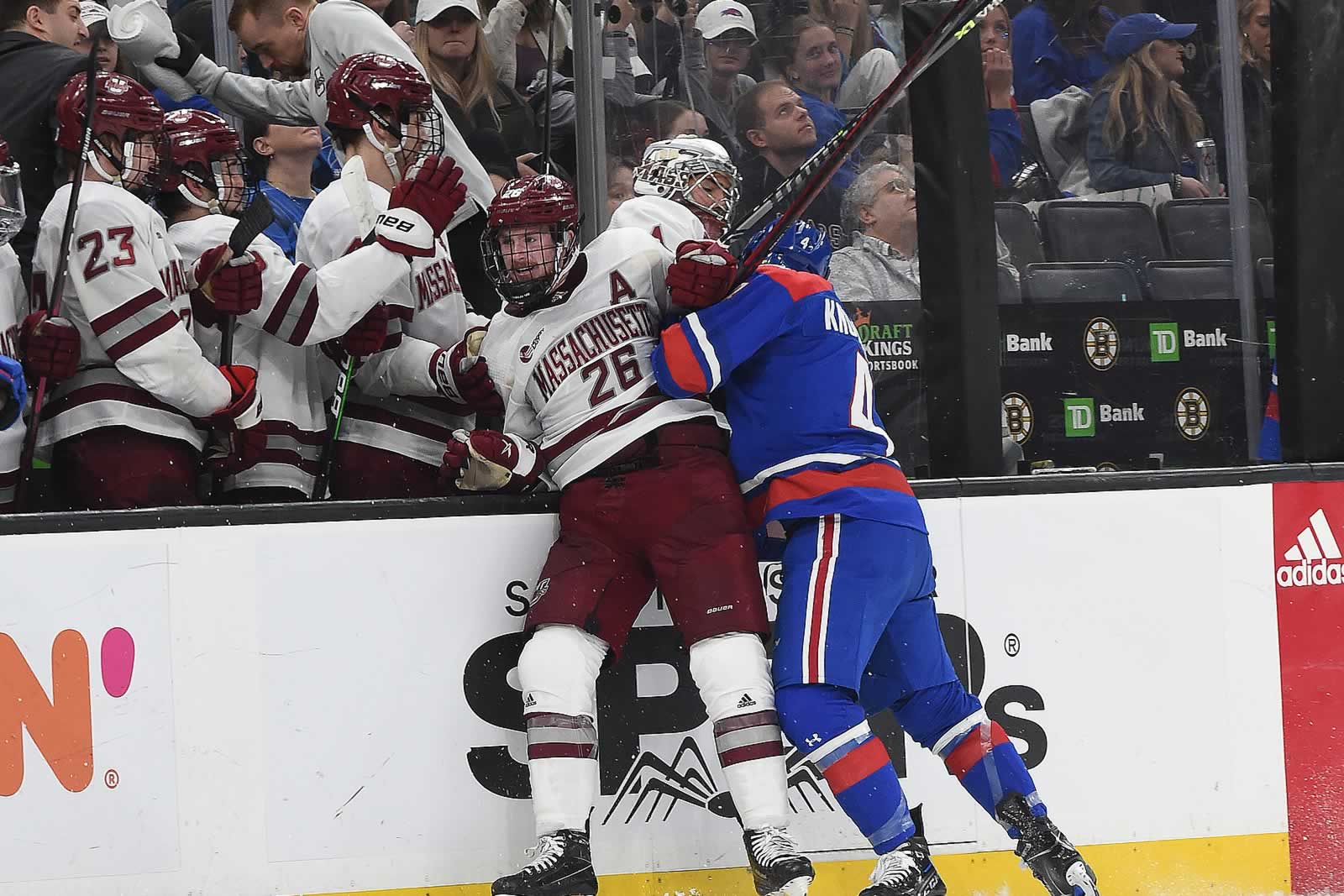 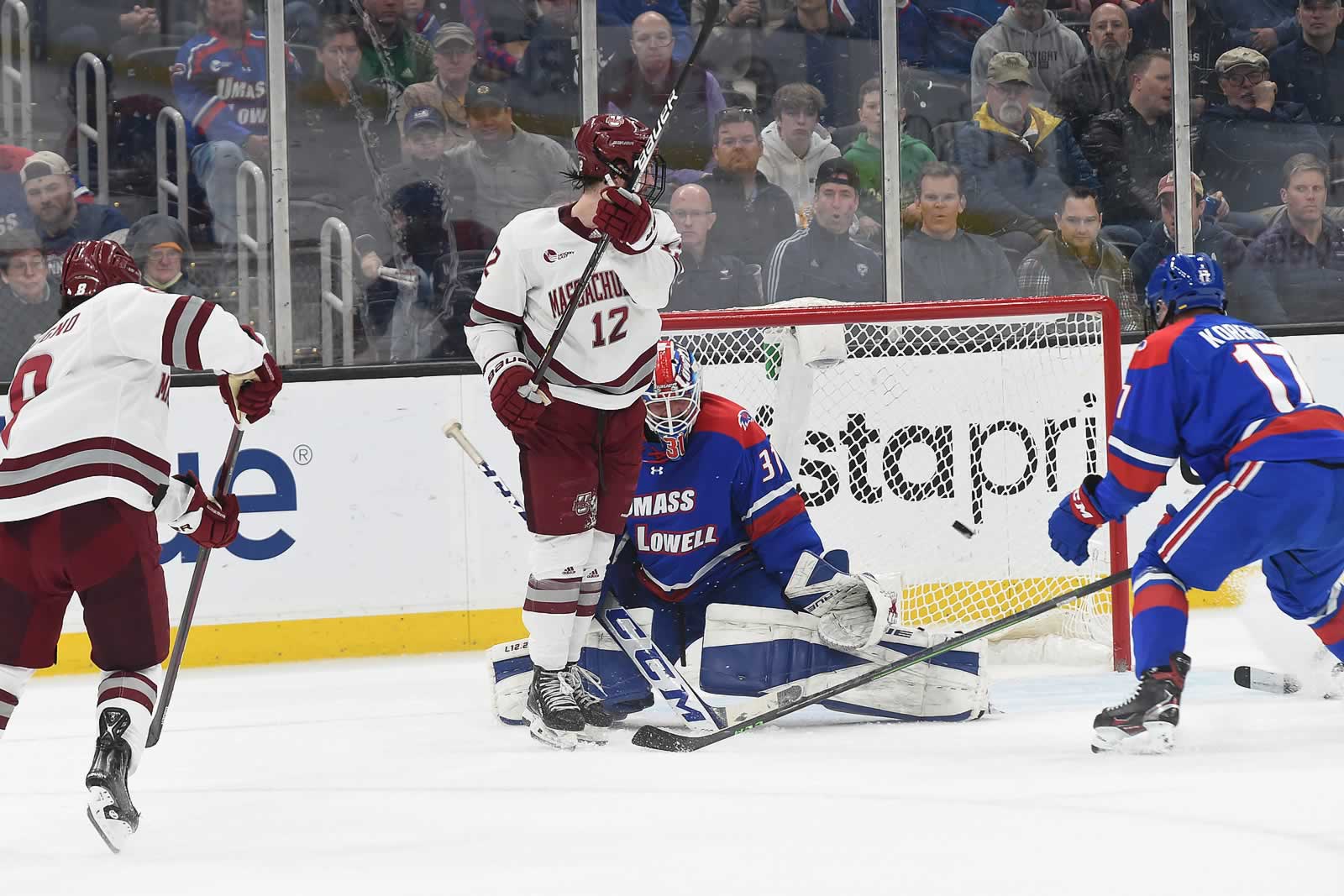 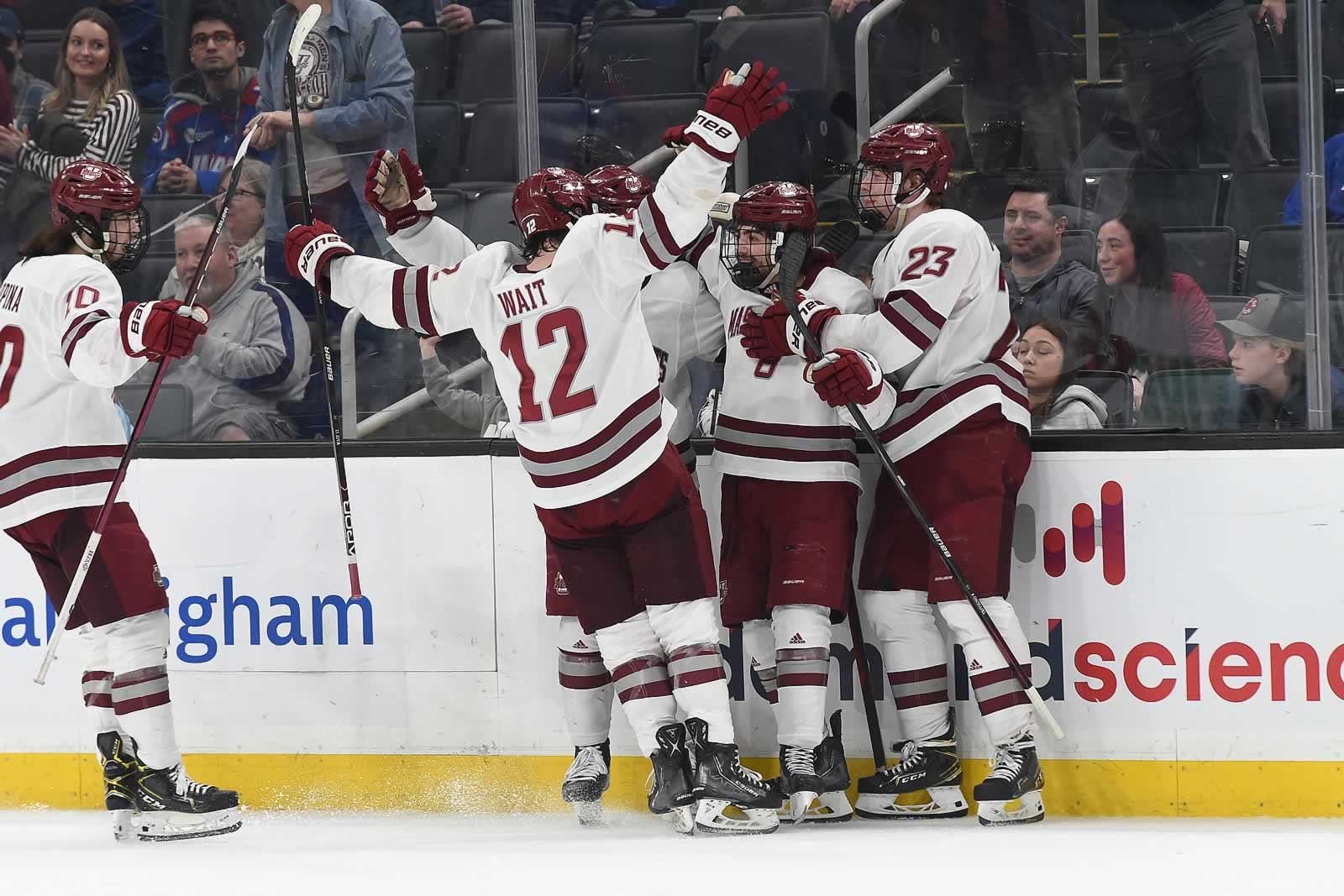 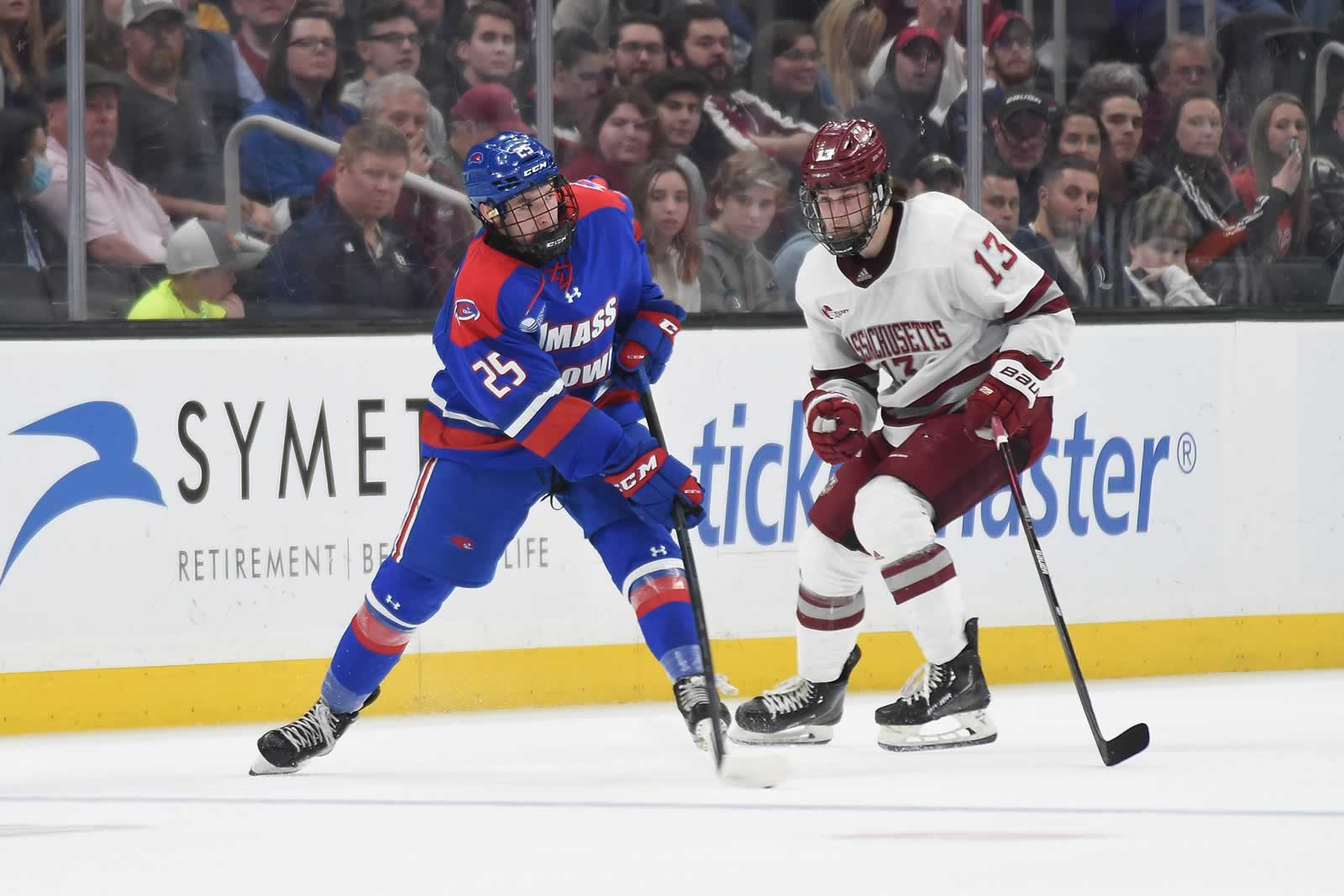 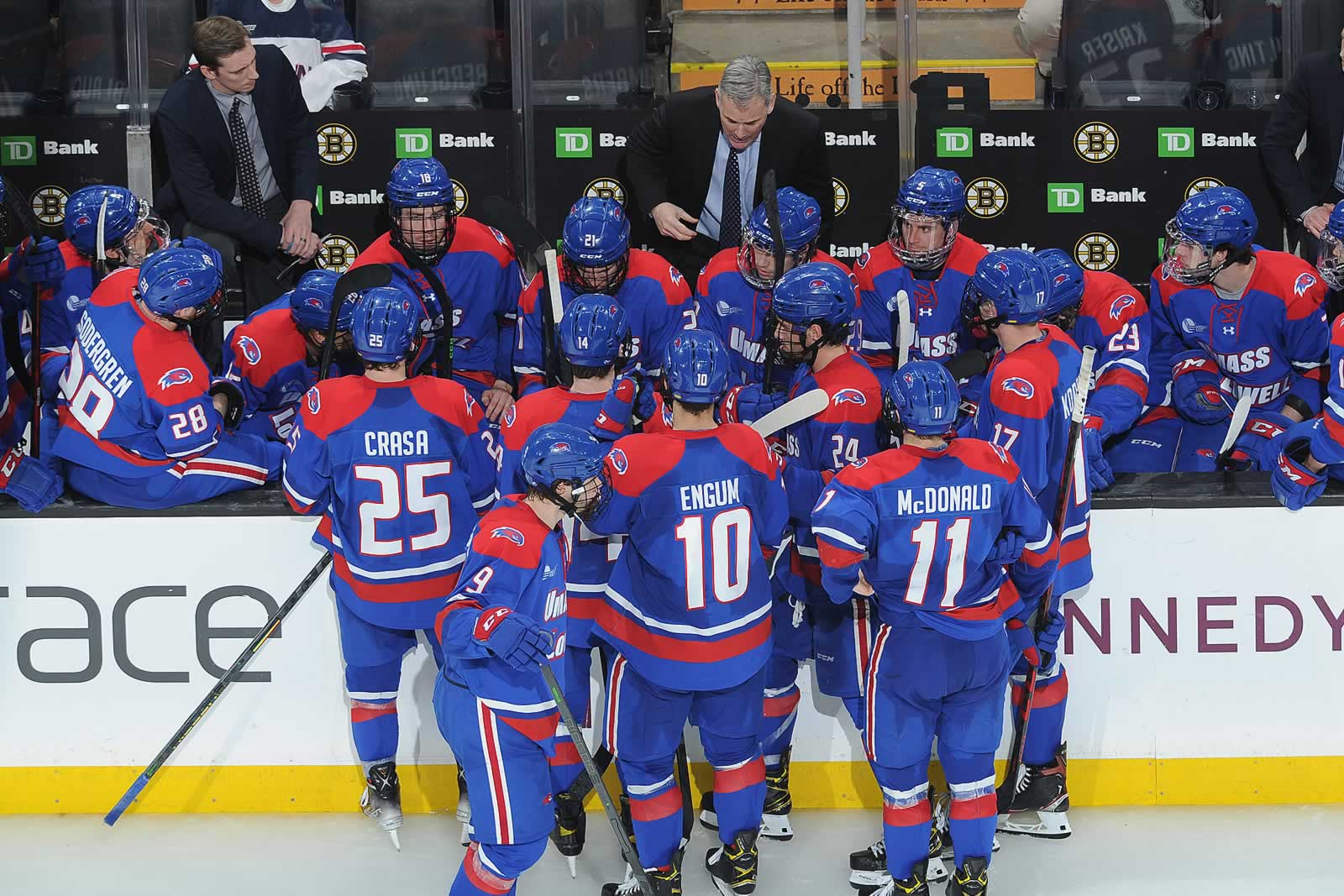 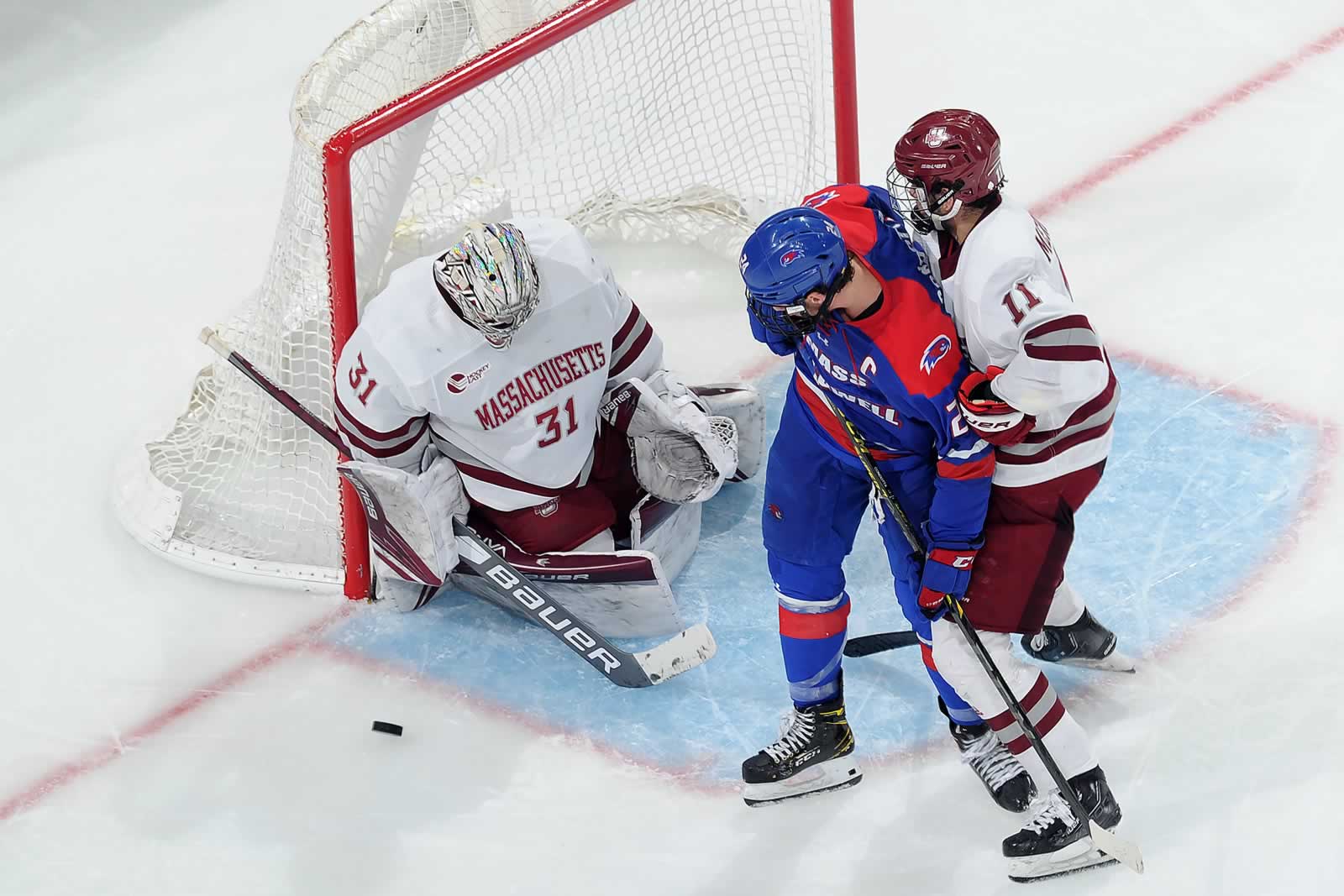 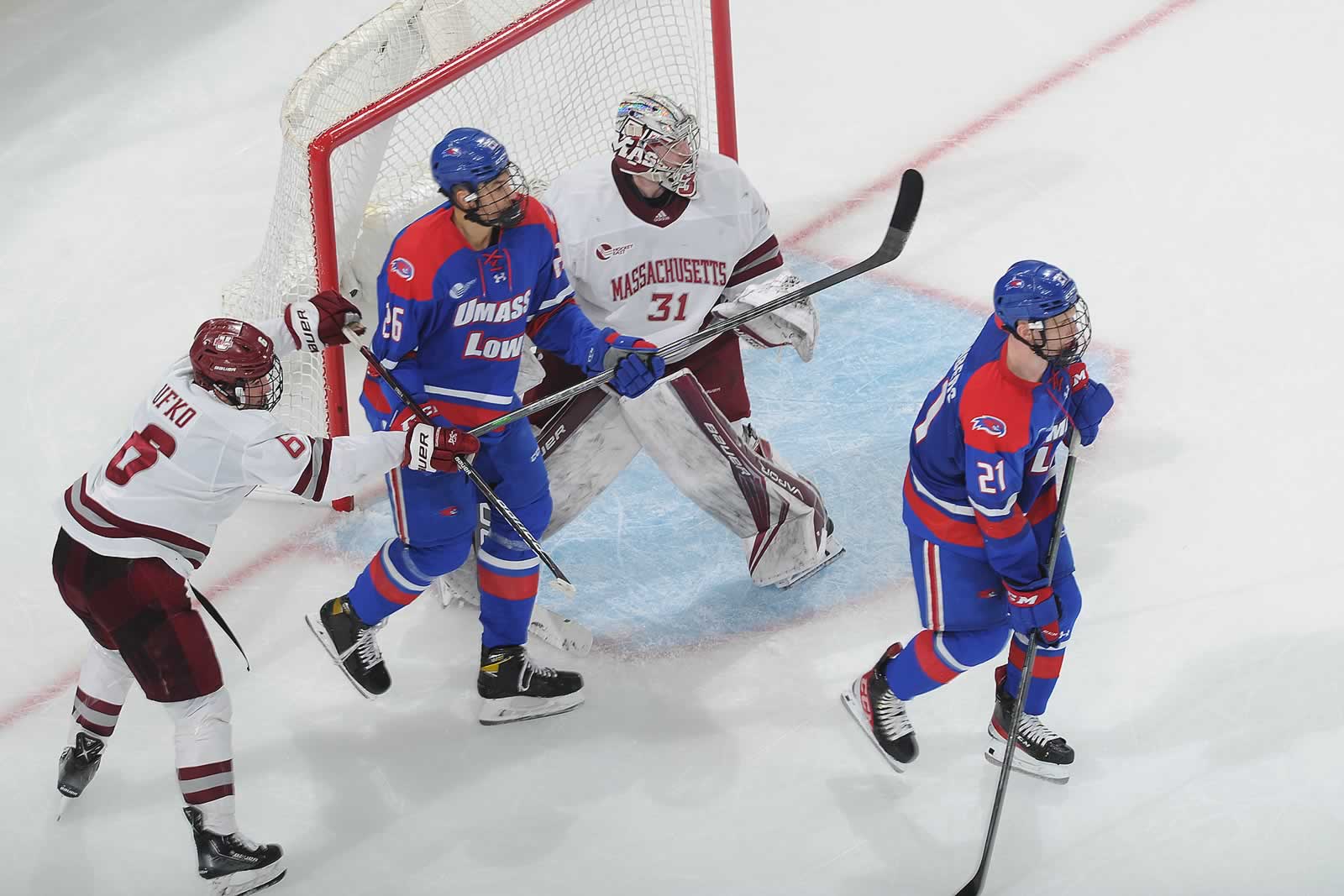 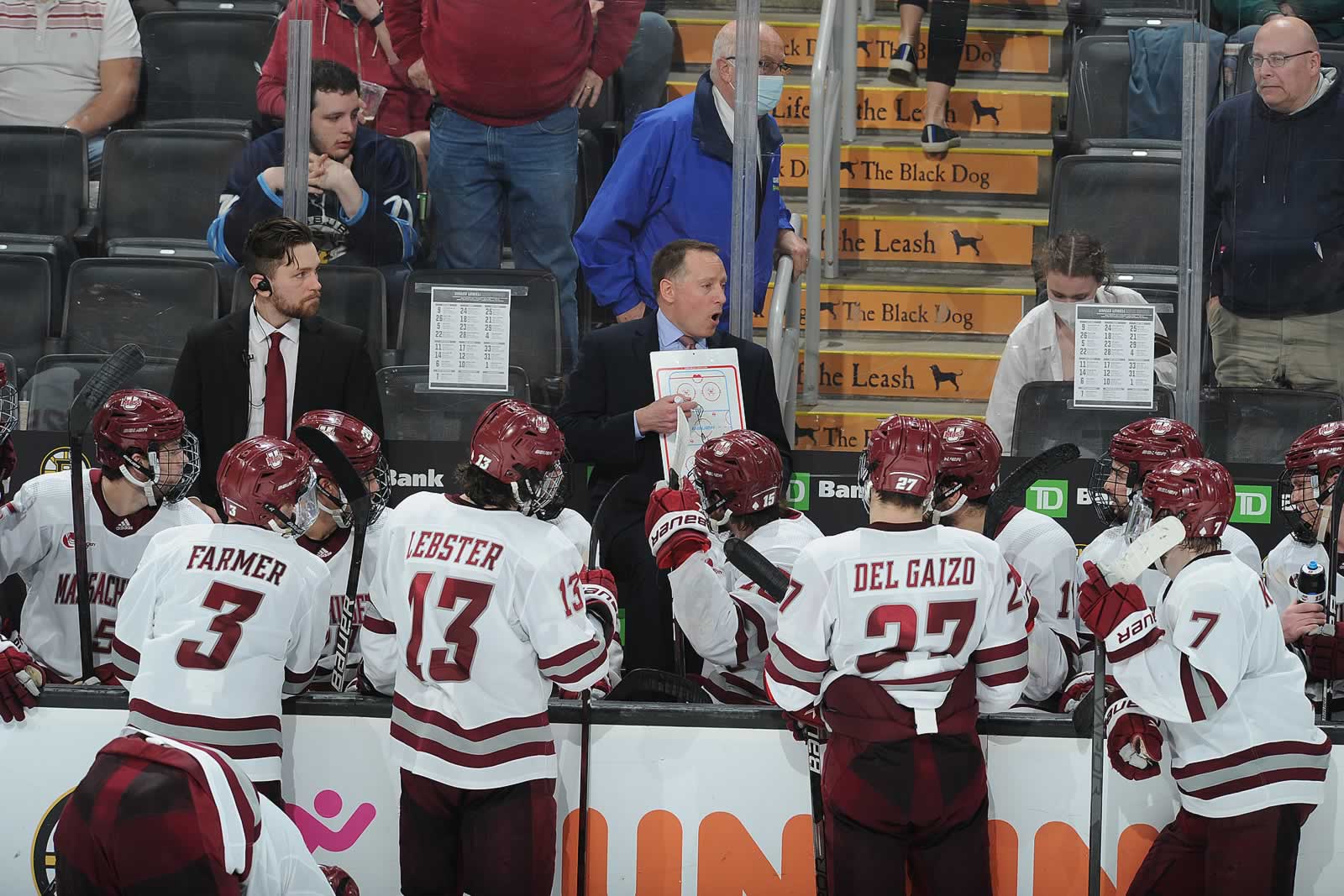 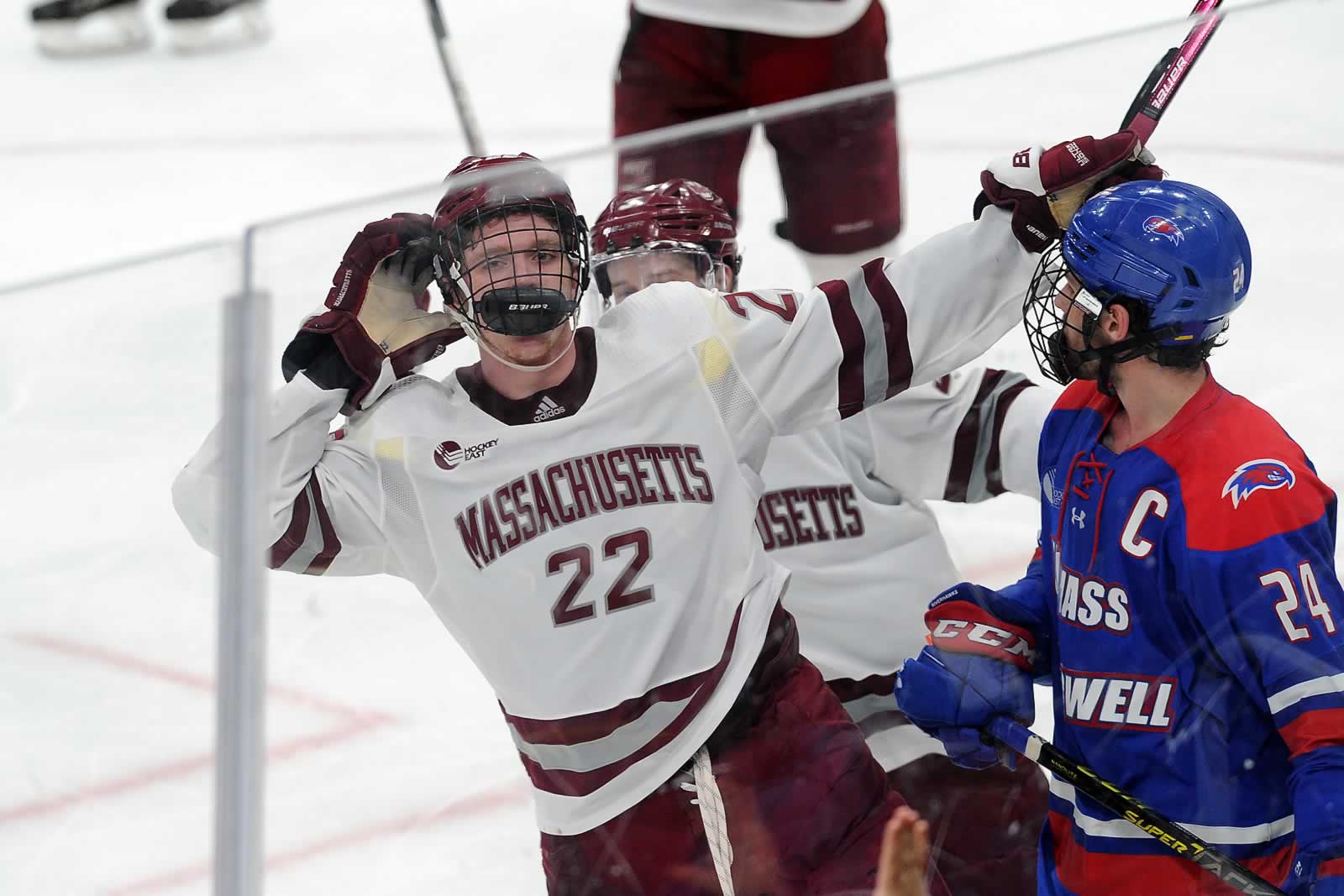 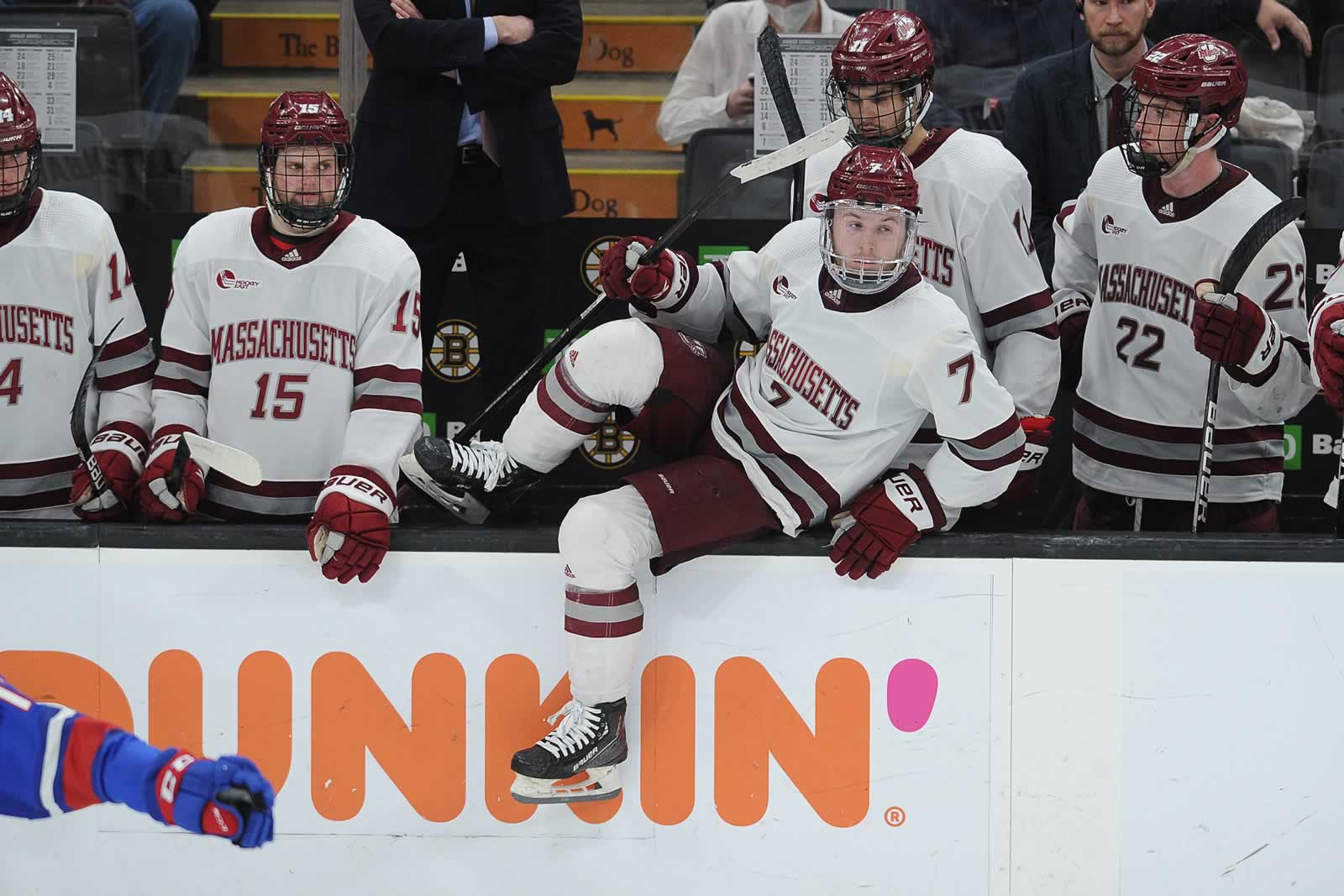 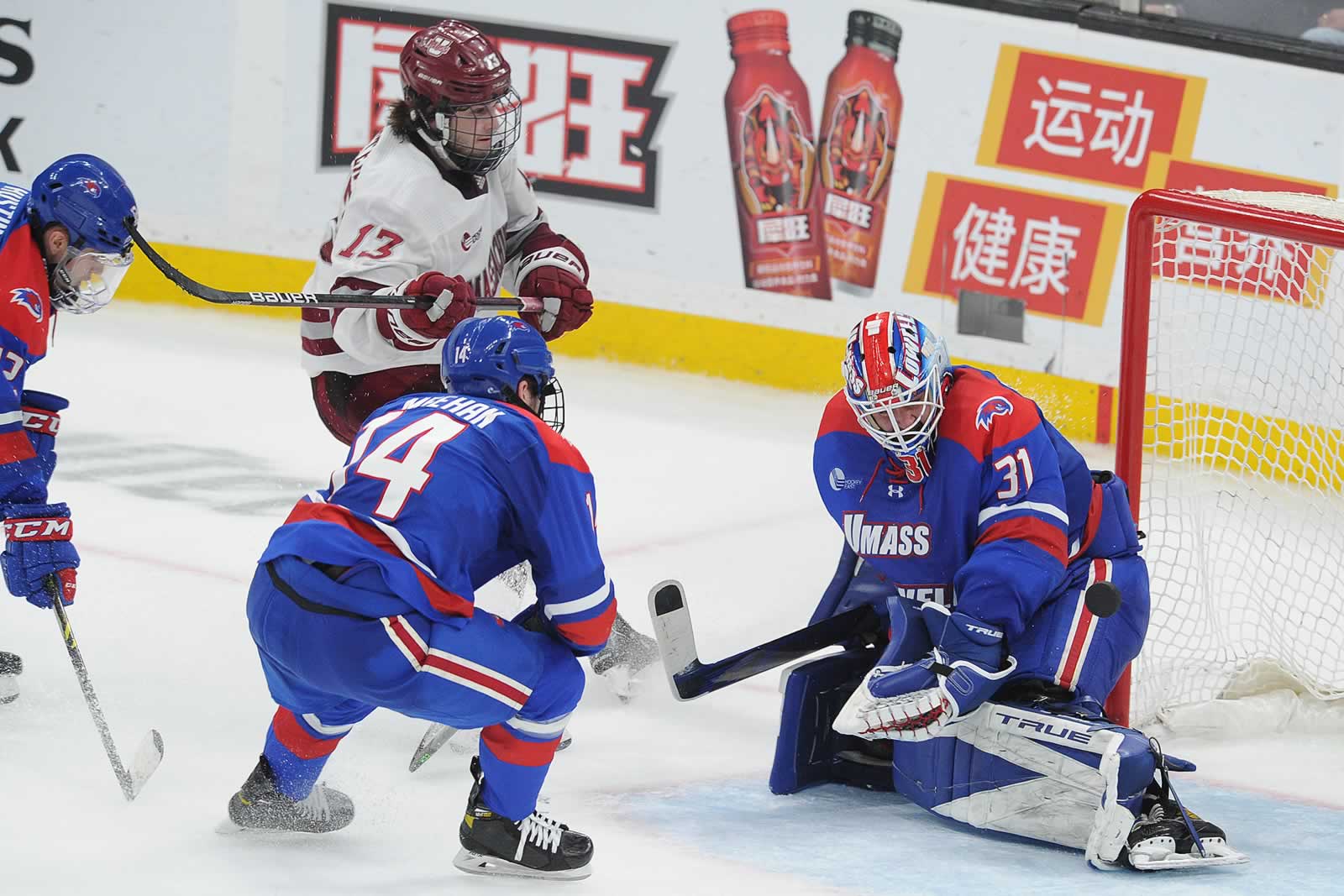 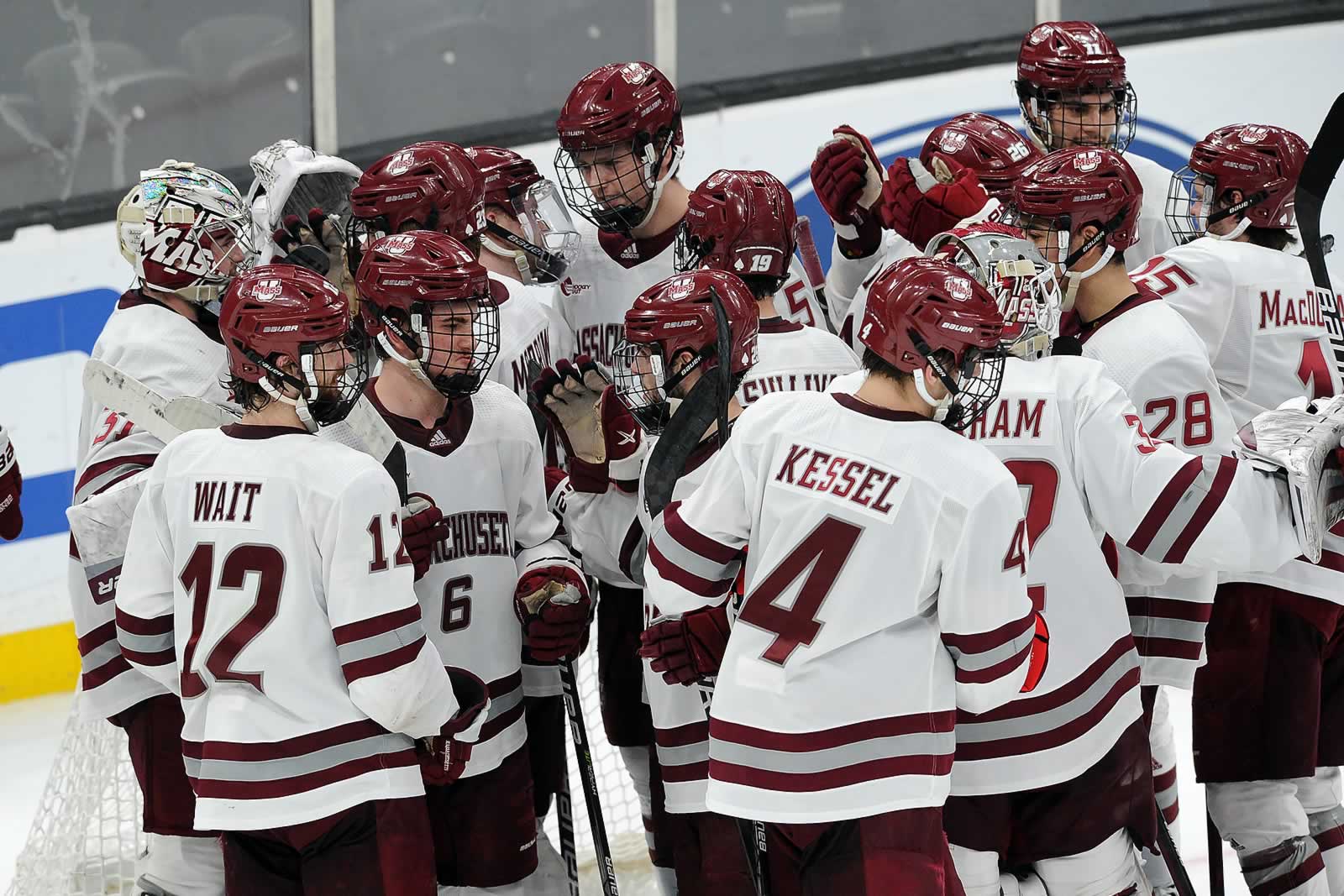 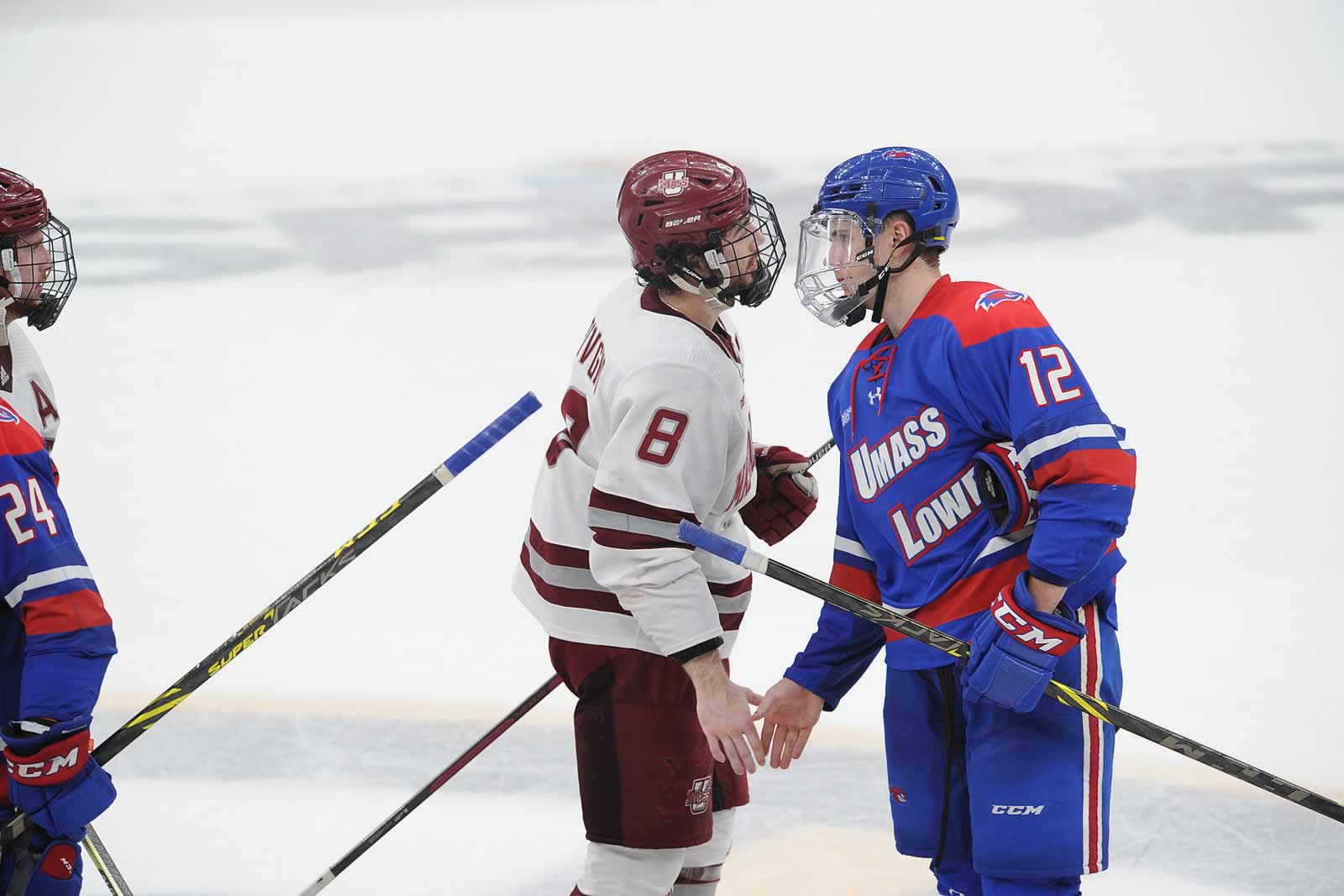 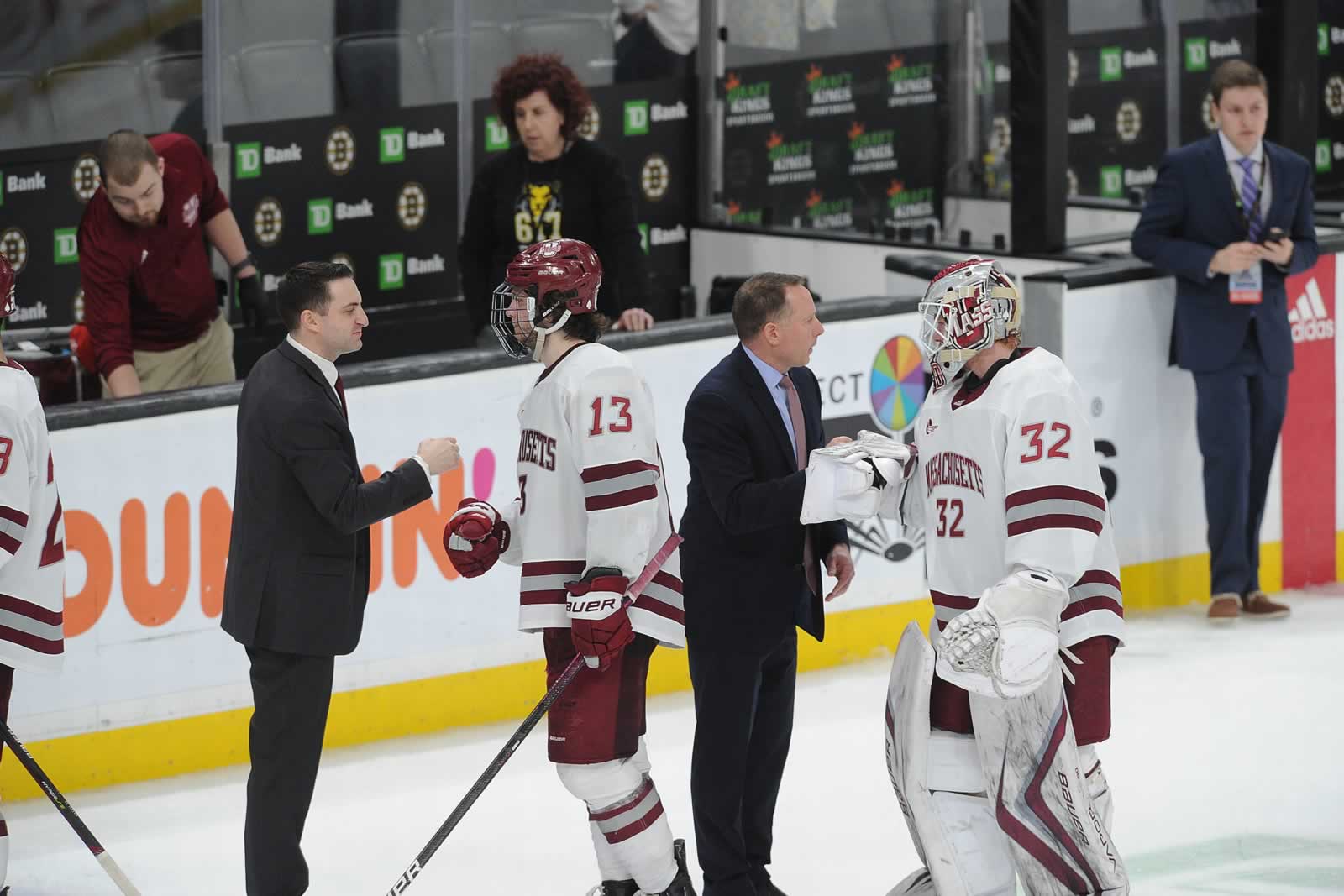