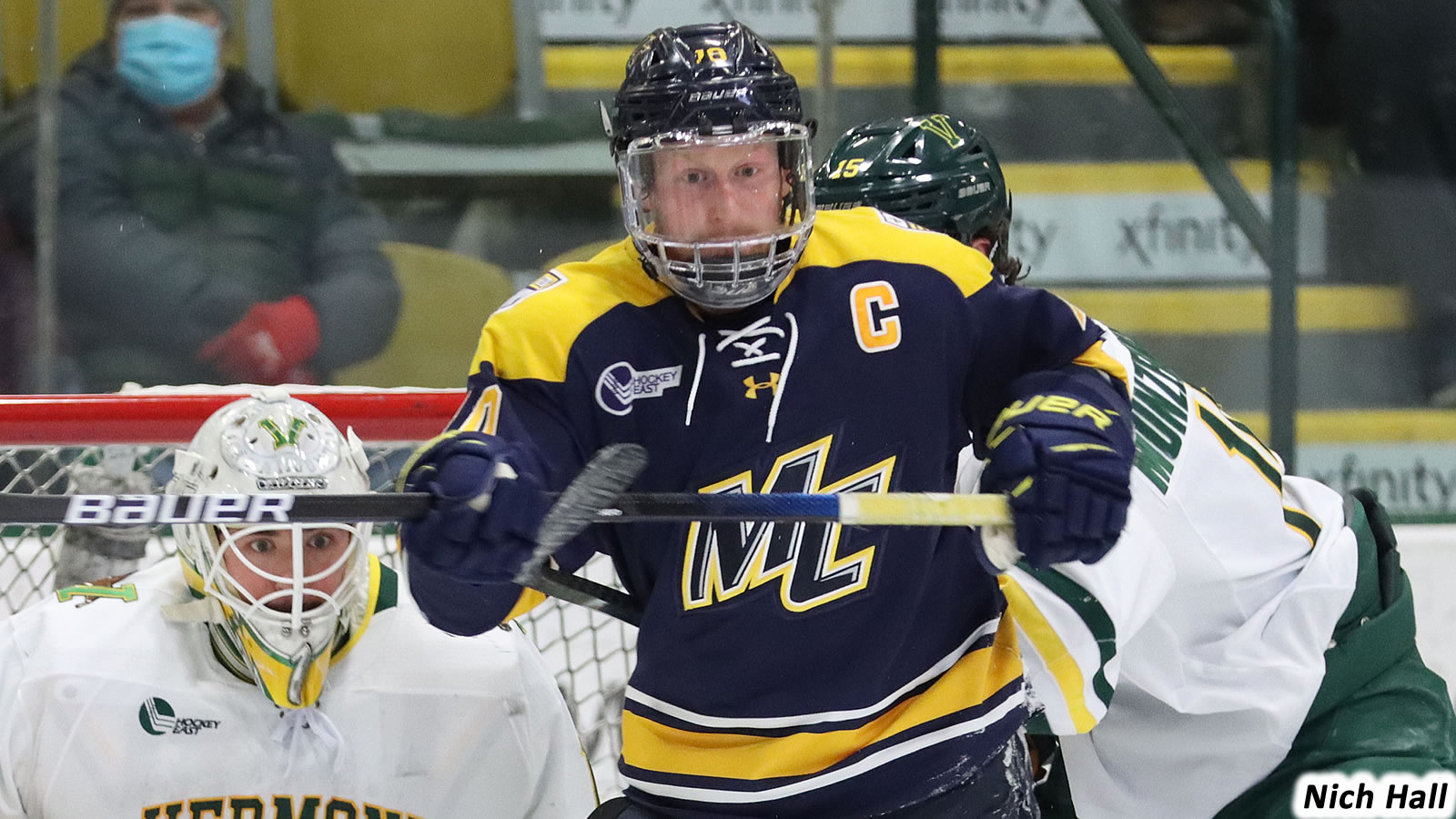 NORTH ANDOVER, Mass. - The Merrimack College men's hockey offensive attack was too much to handle Wednesday night, as it helped the Warriors knock off Maine by a 6-2 final in the opening round of the 2022 Hockey East tournament.

A pair of second period goals just three and a half minutes apart gave Merrimack a three-goal lead and it went on to score three in the third to cruise past the Black Bears. Five different goal scorers found the back of the net, as Max Newton had a pair and Steven Jandric, Filip Forsmark, Matt Copponi and Liam Walsh also lit the lamp.

In the Warrior net, Hugo Ollas got in front of 26 of the 28 shots he saw for his first collegiate playoff win.

It was the second straight sold out crowd that Merrimack played in front of in the final home game of the 2021-22 campaign.

- A capacity crowd donned in white brought tons of energy in the first period and it lifted the hosts to a 1-0 lead. In a frame with a low number of shots, Merrimack needed just one when it got the first power play of the game midway through the frame. Alex Jefferies circled around the near faceoff dot and sent a pass far side to Jandric. His pass to the net front was knocked away, but he collected the loose puck and fired it home.

- Ollas was up to the task on all four shots in the first period, which set up a flurry for the Warriors to begin the second.

- Just over 30 seconds into the second, Jordan Seyfert made a nice play in the neutral zone to get the puck to the far offensive blue line for Liam Walsh. The junior flipped one into the zone for a streaking Forsmark, who pulled it to his backhand on a breakaway and tucked it under the bar to make it 2-0.

- Merrimack's onslaught pressed on three and a half minutes later. Zach Uens had a point shot blocked away, but Mac Welsher gathered the loose puck near the top of the zone. He snuck a shot towards goal that was knocked down in front, but Copponi took a blind backhander while in a battle that tucked inside the far post for his third on the campaign.

- Maine worked its way back and gained some momentum into the middle of the period, which led to its first goal with 6:11 to play.

- Ollas stopped all other eight shots in the frame to keep the Warriors up by a pair when the game entered the third.

- Another offensive flurry started the third period for Merrimack, which all but put the game away. Just under four minutes in, Jandric drove around the net and centered the puck that crept to the point for Mike Brown. The freshman's shot was blocked and didn't get all the way to the net, but Newton was waiting next to the cage to flip it home. It marked the first collegiate point for Brown.

- Seven minutes later, a tremendous display of skill sealed the game. Forsmark lost his footing on a chance at the left faceoff dot and went into the board along with Copponi. Forsmark recollected the puck after Copponi sent it along the wall to him, then with one knee on the ice, he backhanded a pass to Walsh at the bottom of the faceoff dot for a snipe to the far corner of the net.

- Maine pulled its netminder with three and a half minutes to play and the Warriors cashed in, as Newton got his second of the night from Forsmark.

- The Black Bears got one back with just over two minutes left in the game, but Merrimack had plenty of a cushion to move on to the quarterfinal round.

- Declan Carlile turned in a tremendous defensive effort with a +1 rating and six blocked shots.

- Uens ended the night with a game-high +4 rating.

- The game was Newton's third of the year with three points or more, while it was Forsmark's second.

- Newton had the best outing at the faceoff dot with seven wins on 11 chances.

- Mick Messner led the team with five shots on goal.

- The victory marked the first postseason win at Lawler Rink since the Warriors beat New Hampshire, 4-0, in an opening round game Mar. 3, 2017.

Merrimack does not need to travel far for the quarterfinal round, as it draws UMass Lowell Saturday at 4:30 on NESN+. The winner of that game punches a ticket to TD Garden and the 2022 Hockey East Championships, slated for Mar. 18-19.