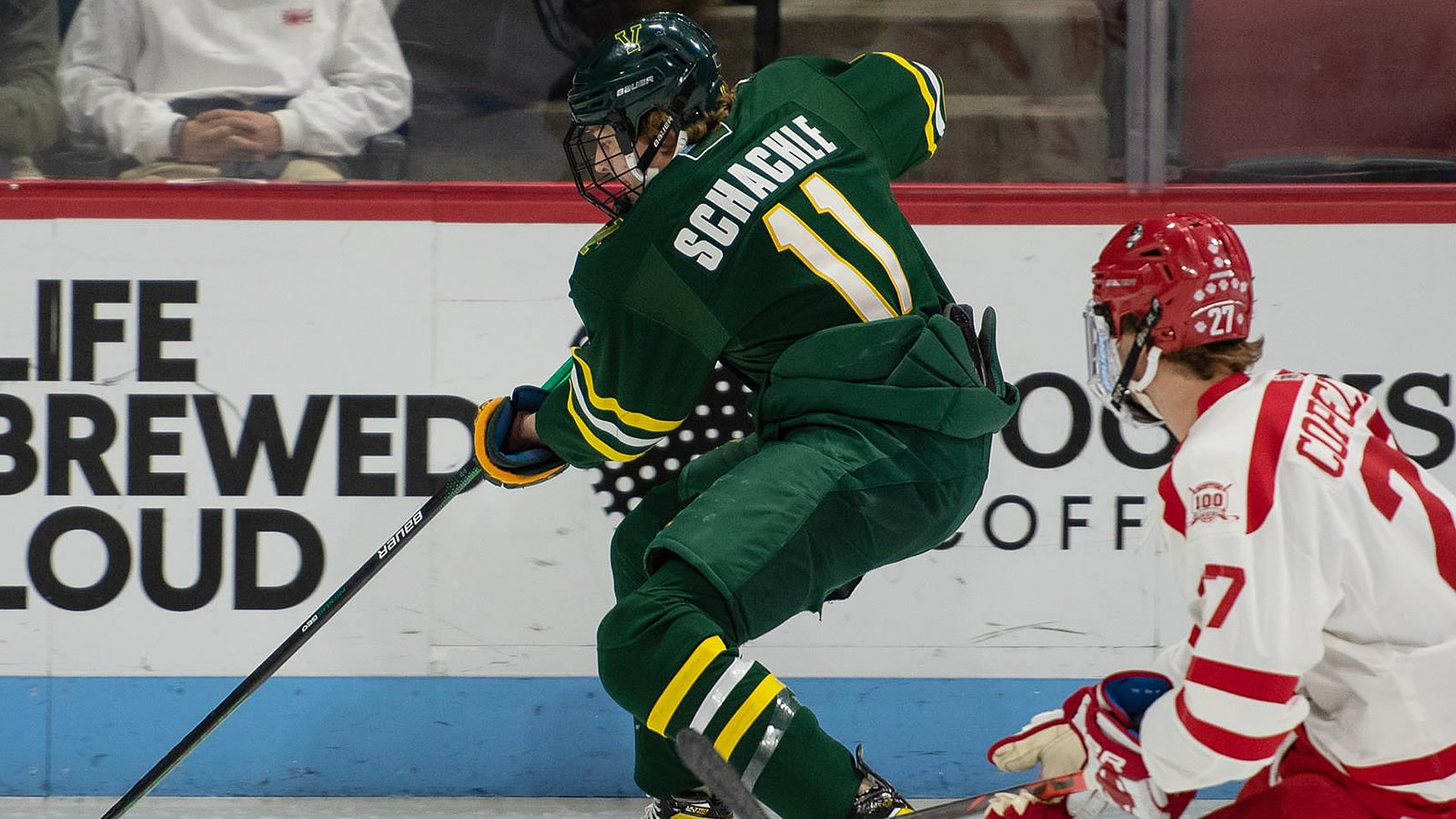 HARTFORD, Conn. - Porter Schachle had two goals and an assist and Joel Määttä had a goal and an assist as Vermont won its second Hockey East game in a row defeating UConn 5-3 Friday night from the XL Center. With the win Vermont cemented a Hockey East Opening Round matchup at No. 19 Providence on Wednesday, March 9.

"A good start to the weekend," said Head Coach Todd Woodcroft. "We were not sharp for the first forty minutes but even when behind, we showed the resilience that will be necessary to be a formidable team in Hockey East. A strong finish for our team with positive contributions from many players. Tomorrow we will need to play a full sixty minutes if we want to earn a second victory. With a tight turnaround rest is now important as we prepare for UConn again."

- After a strong power play from the Catamounts in which UConn's Darion Hanson made several key saves UVM opened the scoring with 8:45 to go in the first. Robbie Stucker fired a low point-shot that caromed off Määttä in front of the net and right to Schachle. Schachle tapped it home for his second goal of the season.

- The Huskies responded with a power play goal just 44 seconds later. Carter Turnbull skated out of the corner and beat UVM's Tyler Harmon with a quick shot to the far post.

- Will Zapernick reestablished the UVM lead with 1:45 to go in the opening frame. Schachle took advantage of a soft UConn pass behind the Huskies net and took the puck into the slot before feeding a cross-ice pass to Zapernick who one-timed it home for his second goal in as many games.

- The Huskies tied things back up 1:14 into the second period. Kevin O'Neil attempted a wraparound that Harmon was able to stop initially. But the rebound sat by the post and Harmon and several of the skaters weren't sure where the puck was. O'Neil spotted it and tapped it home for his sixth goal of the campaign.

- The Huskies took their first lead of the contest six minutes later. Artem Shlaine deflected a point shot past Harmon to make it 3-2.

- With 9:30 to go in the middle frame Määttä scored his second goal of the season to even things at three. Jesper Tarkianen won a puck battle on the forecheck and passed to Määttä in the slot and he beat Hanson with a wicked shot to the top corner.

- Schachle put the Catamounts back in front with a breakaway with 5:23 to go in the second period. Schachle blocked a UConn point shot and was alone from the center ice in. Schachle faked to his backhand and tucked his second of night home just inside the post.

- Harmon made 18 saves in the third period to seal Vermont's second straight conference win. In the final minute of regulation Jacques Bouquot blocked a point shot and Zapernick cleared the zone. Around center ice Bouqout was able to get a slight touch on the puck and deflected it in for his sixth goal of the season.

- Will Zapernick had his second multi-point game of the season with a goal and an assist. He also led the team with seven shots on goal.

The Catamounts will close out the regular season tomorrow at 3 p.m. The voice of the Catamounts, Adam LaFleur, will broadcast the action live on WVMT (FM 96.3 / AM 620). Live streaming is also available for free at CollegeSportsLive. The game will also be available in Connecticut on CW20.