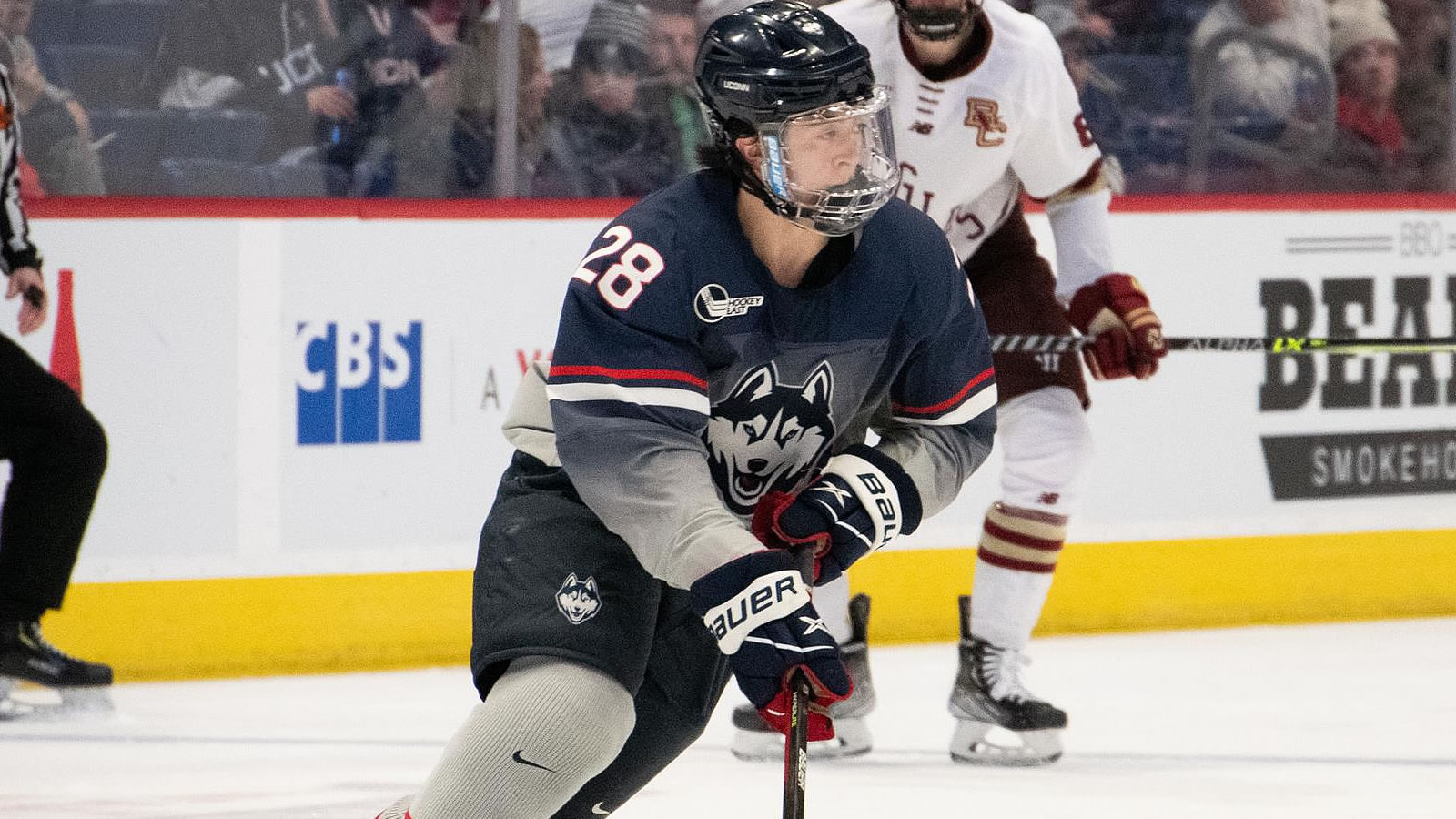 AMHERST, Mass. - Sophomore Ryan Tverberg (Richmond Hill, Ontario) had a hand in all four UConn goals on Saturday night as the No. 20 ranked Huskies went on the road and split a weekend Hockey East series with a 4-2 win at No. 10 UMass in the Mullins Center.

UConn raised their record to 13-7-0 in Hockey East and are now 17-12-0 overall. Their 13 Hockey East wins set a new program high mark as they also improve to 9-2-0 on the road in league games this season.

In addition to Tverberg's career-high four-point night, coming on a goal and three assists, senior Jachym Kondelik (Budejovic, Czech Republic) became the first Husky since the 2013-14 season to hit the 100-point mark for his career (27g/72a). His two-assist night also pushed the senior captain to the top of the UConn Division I career assist list at 72.

The Huskies scored four times on a season-low 17 shots on Saturday while UConn grad student Darion Hanson made 35 stops in net to earn the win.

UConn fell behind 2-1 early in the second period but Tverberg tied it up on the Huskies' second power play goal of the night and third period goals from Hudson Schandor (North Vancouver, British Columbia) and Marc Gatcomb (Woburn, Mass.) secured the win. Sophomore John Spetz (Oak Ridge, N.J.) had the Huskies first goal of the game, coming on the power play.

UMass got a goal each from Bobby Trivigno and Josh Lopina and 13 saves from Matt Murray in the loss.

UMass kept the Huskies at bay for most of the first period, outshooting UConn 9-3, but couldn't convert on a pair of power play attempts including a 5-on-3 chance. The Huskies got a 5-on-3 as well and did find the back of the net. Tveberg was able to kick the puck to Kondelik in front of the net and he fed Spetz for a shot on an empty net and a 1-0 lead at 17:33.

The Minutemen came out flying to start the second period and put two in the back of the net in the first 1:03 of play. Off the opening face-off, Garrett Wait fed a streaking Trivigno up the left wing and he sniped a shot bar down to the far post to even the game just 12 seconds in.

At 1:03, the Minutemen went tic-tac-toe in front of Hanson as Lopina finished off a feed from Aaron Bohlinger in the slot and put UMass up 2-0.

The Huskies got their second power play goal of the night at the 8:26 mark as Tverberg scored his team-leading 13th. The puck cycled up top and over to Spetz at the high point. He threw a shot on net with Tverberg camped in front for a deflection past Murray to even the game back up at 2-2.

The Huskies grabbed the lead at 6:59 as Tverberg helped set up the game-winner. Bursting on net up the left side, the sophomore beat the defense and looked for a shot before hitting the ice. Schandor was right in front to bat in the loose puck before Murray could recover and get his fourth and the night's game-winner.

The Huskies put the icing on the win with 1:15 left as Tverberg won a loose puck in the right corner after taking a feed up ice from Kondelik and then found Gatcomb all alone in the slot who buried his chance for his seventh and a 4-2 lead.

The Huskies will take on nationally ranked Northeastern in a Hockey East home-and-home next weekend. UConn heads to Matthews Arena on Friday, February 25 and host the Huskies on Saturday, Feb. 26 at the XL Center.