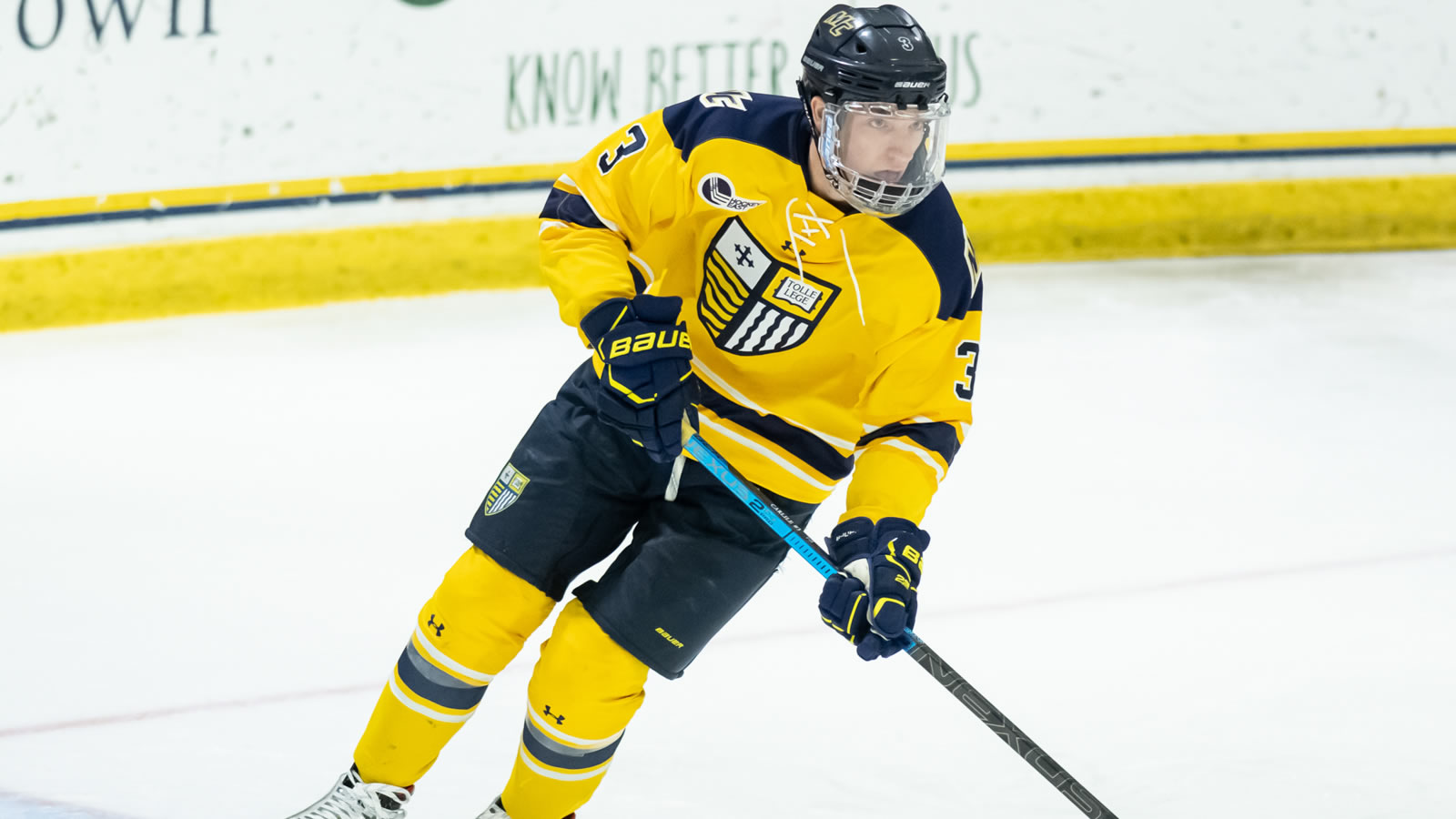 NORTH ANDOVER, Mass. - The Merrimack College men's hockey team simply found a way to win Friday evening at Lawler Rink, as an electrifying goal from Alex Jefferies in the third period stood up as the game-winner in a 3-2 victory over Vermont.

Jefferies displayed his speed with an amazing play in the third where he corralled the puck in the defensive end, then finished it off at the net front for the game-winning goal and the sophomore's seventh of the season. Ben Brar and Liam Walsh both scored in the first period to tie the game on both occasions, as Merrimack battled back for its ninth win in the last 11 games.

Hugo Ollas collected himself and was unbeatable in the final two periods and the freshmen netminder concluded the game with 29 saves on 31 shots.

Declan Carlile pressed on with his prolific junior season from the back end with a team-leading two points on a pair of assists.

- The game's opening frame was a hectic one, but the chaos did not ensue until the second half of it. Merrimack and Vermont were nearly even in shots, then the Catamounts struck first on a tough bounce for the Warriors with 8:05 left in the period.

- Like they've done all winter, the Warriors had a response. Just over three minutes later, Jake Durflinger slung a pass through the slot from behind the goal line that eventually got out to Zach Vinnell at the point. The defenseman crept in and fired a feed along the ice from the top of the right faceoff circle that Brar got a stick on through traffic to knot the game at one.

- Merrimack scored that goal with an extra attacker on the ice and it enjoyed a power play after as well, but Vermont was the one that capitalized with a shorthanded goal just six seconds after the Warriors tied the game.

- The first power play came and went for the Warriors, but they got another opportunity with just over a minute to play and did not let it pass. Declan Carlile made a nice play to body a player away from the puck at the near half wall, then backhanded a pass to the far point for Uens. The junior was only able to poke it forward for Walsh, whose original shot was blocked, but he jabbed at the rebound and found the back of the net. It marked the 12th straight game that the power play unit has scored at least one goal.

- Merrimack had some decent chances, including a power play opportunity in the second, but was unable to score. In the Warrior cage, Hugo Ollas came up big and made 10 saves on as many shots, including a 3-on-1 chance for the Catamounts, to keep the game deadlocked after 40 minutes.

- With the game up for grabs, the Warriors took a strangle hold of it early in the third. Carlile won a board battle in the defensive end for Max Newton, who sent a pass to the middle for Jefferies near the defensive blue line. The sophomore flipped a puck into space in the neutral zone, then chased it down in the attacking end before he stuck a forehanded shot under the bar for the lead.

- Vermont was able to mount 10 shots on goal in the third period, but Ollas stood up tall once again. He made the save on the final 21 shots he saw to secure his team-leading ninth win of the year.

- Carlile finished with a +1 rating to make it a team-leading +19 on the year. That rating also ties him for the best in Hockey East.

- Brar, Jefferies and Jake Durflinger tied for the team-high in shots with three apiece.

- Brar and Mac Welsher both had a pair of blocked shots.

- Newton and Mick Messner both finished above .500 on faceoffs for the game.

- Ollas improved his numbers on the year and now has a .924 save percentage and 2.07 goals against average.

- Carlile now has six points in his last five games, including a pair of multi-point outings.

- Uens has notched an assist in each of his last three games.

- Merrimack sits in third place alone in the Hockey East standings with 36 points at the end of day Friday. It is four points behind league leaders UMass Lowell and Massachusetts.

Merrimack and Vermont conclude their three-game series Saturday night with a 7:00 puck drop from Lawler Rink.