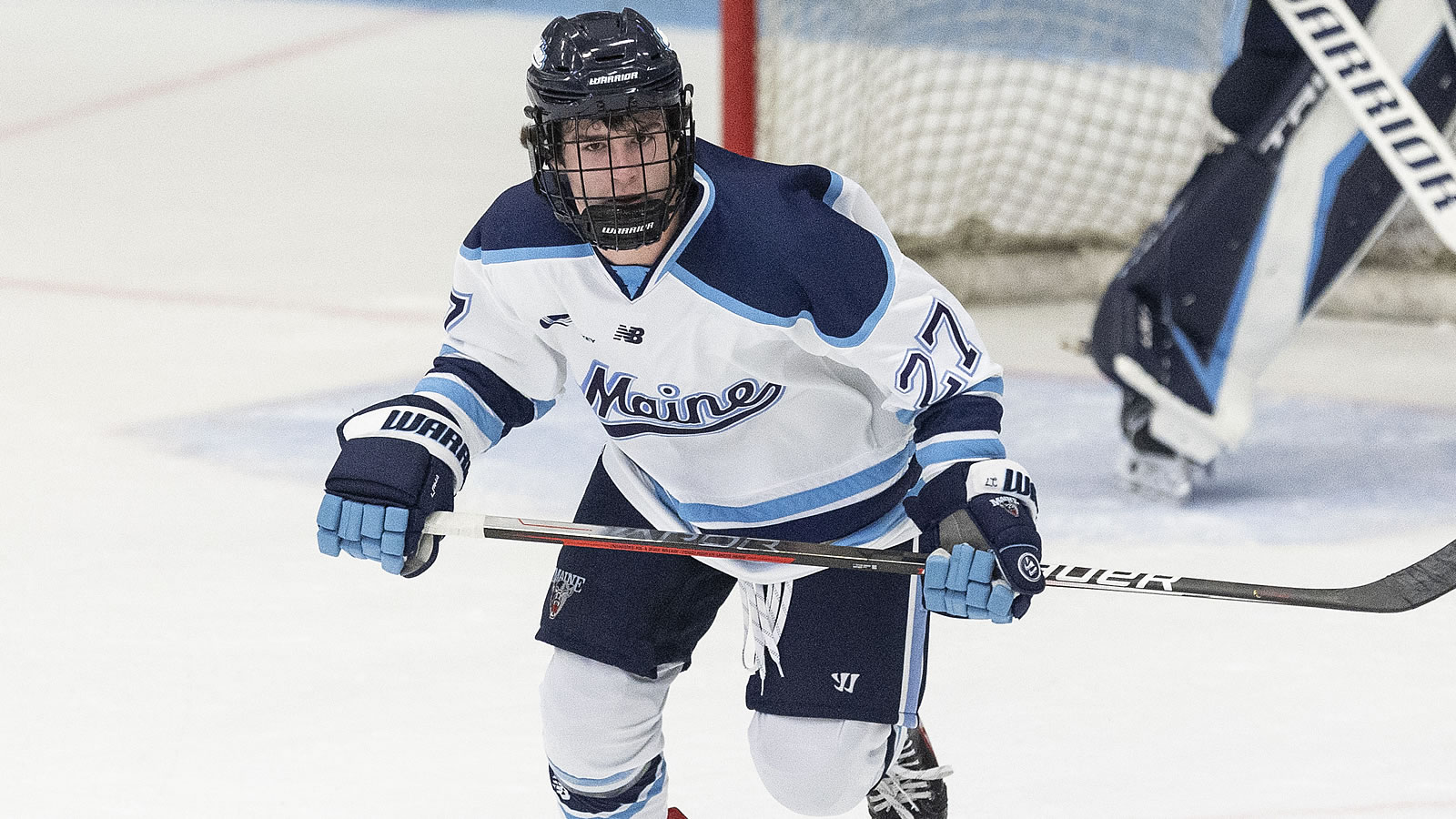 First Goal (1-0 Maine): Lynden Breen scored 00:42 into the Hockey East contest. Donavan Villeneuve-Houle had his shot saved by Mike Robinson. The rebound was left uncovered. Breen pushed the puck between the netminder's legs and into the net. Maine led 1-0 less than one minute into the game.

Second Goal (2-0 Maine): With his tireless effort, Jacob Schmidt-Svejstrup scored Maine's second goal of the evening. Dawson Bruneski fired a shot that deflected off Schmidt-Svejstrup's skate and into the back of the net. 5:49 into Friday night's Border Battle, Maine held a two goal lead.

Third Goal (3-0 Maine): After stealing a puck in the neutral zone, Adam Dawe scored a break-away, unassisted goal. The senior made easy work of the Wildcats' goaltender and added to the Maine lead.

Fourth Goal (4-0 Maine): Scoring his first goal of the year, AJ Drobot put the fourth and final goal of the first period into the net. Nolan Renwick and Drobot fought to keep the puck in the UNH end. Renwick directed the puck to the front of the net. From his back, Drobot lit the lamp. After 20 minutes, Maine led 4-0.

Fifth Goal (4-1 Maine): Finally scoring a goal for the Wildcats, Filip Engaras tallied his squad's first of the period. The UNH goal would quickly be forgotten.

Sixth Goal (5-1 Maine): Breen scored his second goal of the night shortly after the Wildcats scored their first of the night. David Breazeale kept the puck long enough for Houle to pick it up. The top line combined for another Black Bear goal. Maine led 5-1 halfway through the second play

Seventh Goal (5-2 Maine): After Victor Ostman made the original save, Nick Cafarelli poked the puck into the net. Once again, the UNH goal would immediately be matched by a Black Bear goal.

Eighth Goal (6-2 Maine): While on a five minute penalty kill, Ben Poisson scored Maine's first short handed goal of the 2021-22 season. David Fessenden came out of his net to play the puck but was unable to turn away Poisson. At the end of two periods, the Black Bears led 6-2.

Victor Ostman stopped 30 shots for the Black Bears, while Mike Robinson tallied 12 saves for UNH before David Fessenden was called upon to make 11 saves for the Wildcats.

Maine went 0 for 6 on its power play opportunity, as the Wildcats were 1-6 on its player advantages.

The Black Bears blocked 14 shots and won 19 face-offs as a team.