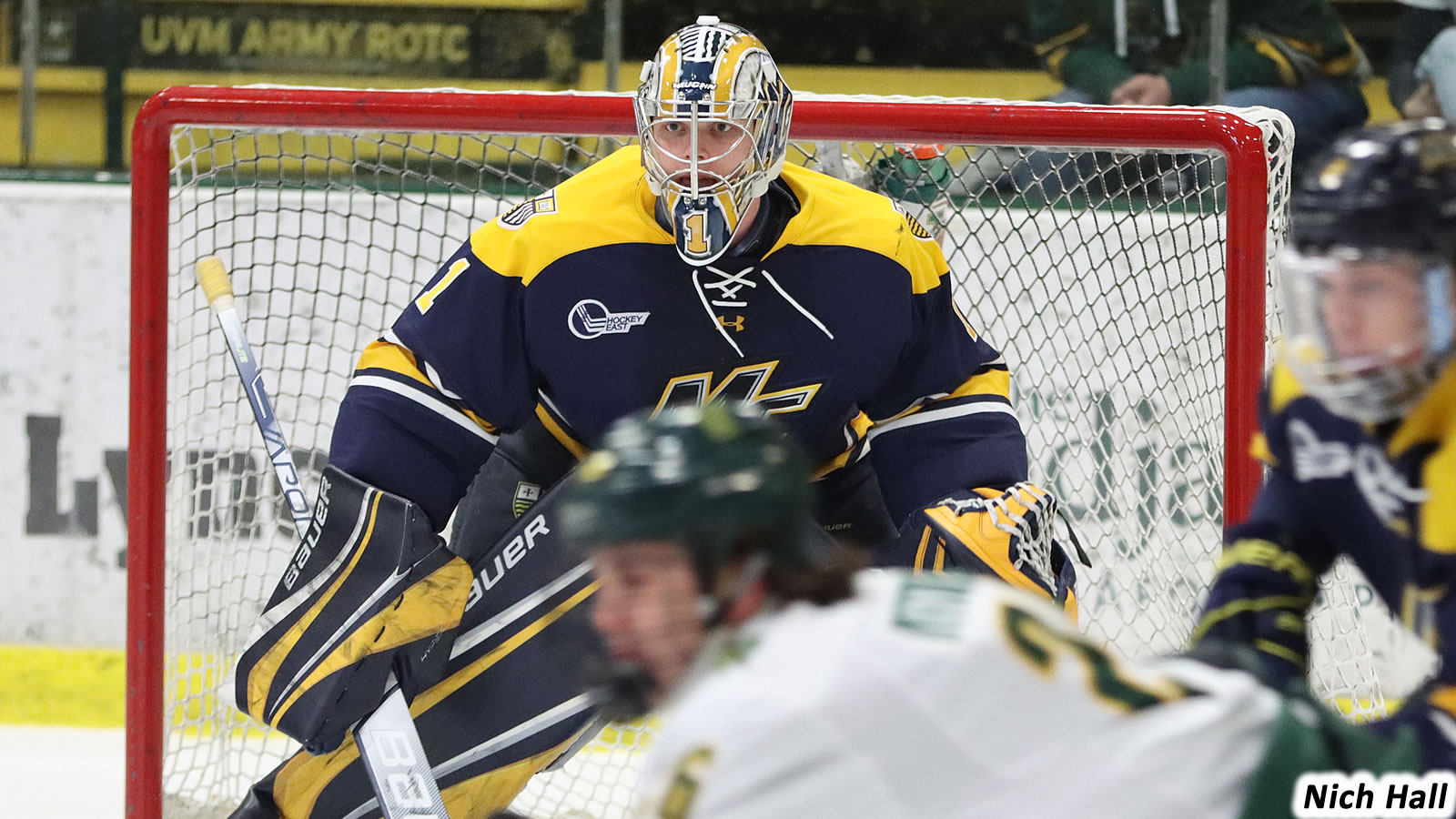 BURLINGTON, Vt. - The Merrimack College men's hockey team could not be denied Sunday afternoon at Gutterson Fieldhouse, as the Warriors netted four unanswered goals to knock off Vermont, 4-1.

The Catamounts got on the board first early on in the second period, but Declan Carlile's goal late in the frame tied it, then a trio in the third, including an empty net goal, pushed Merrimack to the win. Jake Durflinger was credited with the game-winner after he broke the tie 3:10 into the final frame, then Alex Jefferies and Liam Walsh had the insurance markers.

Hugo Ollas steadied the ship in net thanks to 20 saves, including eight in the third stanza. It was the freshman's team-leading eighth victory on the campaign.

Steven Jandric led the Warrior offense, as the graduate student forward assisted on a pair of goals.

- In an exceptionally fast first period with just a handful of whistles, the Warriors carried the play in the latter stages. Mick Messner broke free for a breakaway chance and Walsh had a point blank chance denied, as the team skated scoreless in the frame.

- The Merrimack press towards the end yielded a 15-7 edge in shots on goal into the first intermission.

- After a penalty was called at the 20:00 mark of the first, the Merrimack penalty killing unit had its 10th consecutive successful kill to open the period, but the Catamounts struck first five minutes later when a point shot found its way into the back of the net.

- Merrimack fought back with a few chances, but it wasn't until the final three minutes of the frame when the visitors broke through. Jordan Seyfert threw a puck through the crease from the far corner that zipped to the near half wall. Carlile was the first one on it and had a slap shot blocked. The loose puck was recollected by Carlile, then he crept in to the faceoff dot for a wrist shot that picked the far corner to level the game after 40 minutes.

- It did not take long for the Warriors to take a strangle hold of the game once the puck dropped for the third. Just over three minutes in, Matt Copponi was denied on an in-close chance, but Zach Uens recovered the rebound and found Durflinger alone in the slot, who pumped home his third of the year.

- Just a few moments later, the Merrimack power play got its first chance of the game and it converted once again. Logan Drevitch had a drive from the left faceoff circle denied, then Jandric was stopped on the rebound. Zach Vinnell got to it next from the high slot and fed Jefferies along the goal line, who sent one along the ice that just snuck inside the post. It marked the 11th straight game that the men from North Andover had scored at least one power play goal.

- Vermont was unable to generate any high quality scoring chances in the final 14 minutes and Jandric made an unselfish play to Walsh in the closing 15 seconds for the empty net goal that sent the Warriors home happy.

- Merrimack's scalding hot power play group is now converting at a .240 success rate on the season, which is good enough for a top-10 ranking in the nation in the category.

- The Warriors outshot Vermont by a hefty 36-21 margin.

- Jandric had his sixth multi-point game of the season thanks to the two helpers. He is also on a five-game point streak that includes eight points on three goals and five assists.

- Jefferies now has six points in his last five outings.

- Ollas continues to creep towards a sub-2.00 goals against average with a 2.08 mark on the year and a .923 save percentage.

- Uens, Messner and Seyfert all finished the game with +2 ratings.

- Mac Welsher had the best effort of the game at the faceoff dot with eight wins on 15 opportunities.

- Carlile's seven goals ties him for second-most among defensemen in Hockey East.

The teams continue on with a string of three straight games against each other Friday night at Lawler Rink. Puck drop is slated for 7:00 pm.