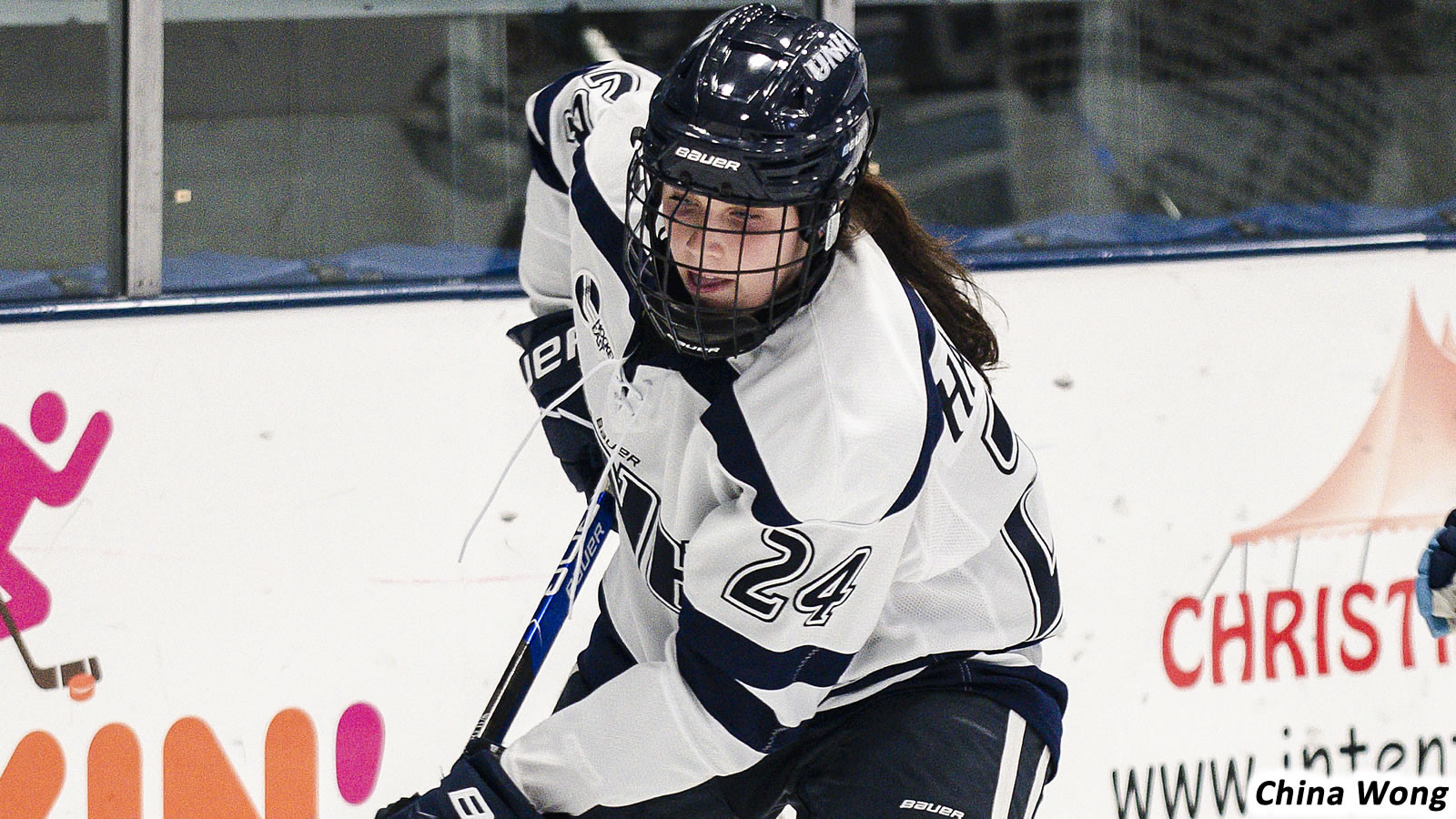 The two goals and two points both marked career highs for the freshman forward, and the 37 saves matched the career high for Harnett; the junior stopped 12 in each of the first two periods and 13 in the third.

Seniors Lindsey Dumond (Hampton, N.H.) and Maddie Truax (Gardner, Mass.) assisted on the game-winning goal at 7:25 of the third period.

- The Wildcats' next home game is Feb. 15 (6 p.m.) against fifth-ranked Northeastern University.

- UNH was whistled for tripping just 34 seconds into the game, but the Crusaders went to the box for high sticking at 2:05.

- Brianna Brooks (Whitby, Ontario) wristed a shot from the slot that ricocheted off the right post at 9:35.

- Neither team capitalized on the early power plays, but the visitors took a 1-0 lead on a late power-play goal.

- Bailey Bennett moved the puck from the right point to Lilly Feeney in the corner. Johal then redirected Feeney's centering pass into the cage at 18:03.

- UNH responded with a 13-12 shot advantage and scored the only goal of the middle stanza.

- Hammer began and finished the scoring sequence that tied the game, 1-1, at 3:48. She gained possession at the defensive blue line and advanced to center ice before finding Shea Verrier (Reading, Mass.) on the right wing. Verrier sent a return pass to the slot and Hammer shoveled a backhander high left-side.

- HC created a 2-on-1 rush with 5:15 on the clock, but Harnett stopped Johal's initial shot from the slot and then Emilie Fortunato lifted the rebound wide of the left post.

- Holy Cross had the 13-9 shot advantage in the final frame but the 'Cats scored the lone goal.

- One minute into the period, Bryn Saarela corralled a stretch pass at the blue line for a breakaway down the slot, but Harnett stopped the rising shot from close range.

- Hammer struck again at 7:25 to give New Hampshire a 2-1 lead. She won the puck on the right boards in the neutral zone and sent the puck back to Truax. Her diagonal pass sent Dumond on a rush down the left wing. Hammer swept the centering pass past Brenon.

- Holy Cross called timeout with 1:54 remaining and pulled Brenon in favor of an extra skater.

- The Crusaders kept the puck in the attack zone a majority of the rest of the way, but UNH allowed just one shot attempt and that was blocked by Annie Berry (Milton, Mass.) with 1:34 to play.

- Kelly had a team-high six shots.