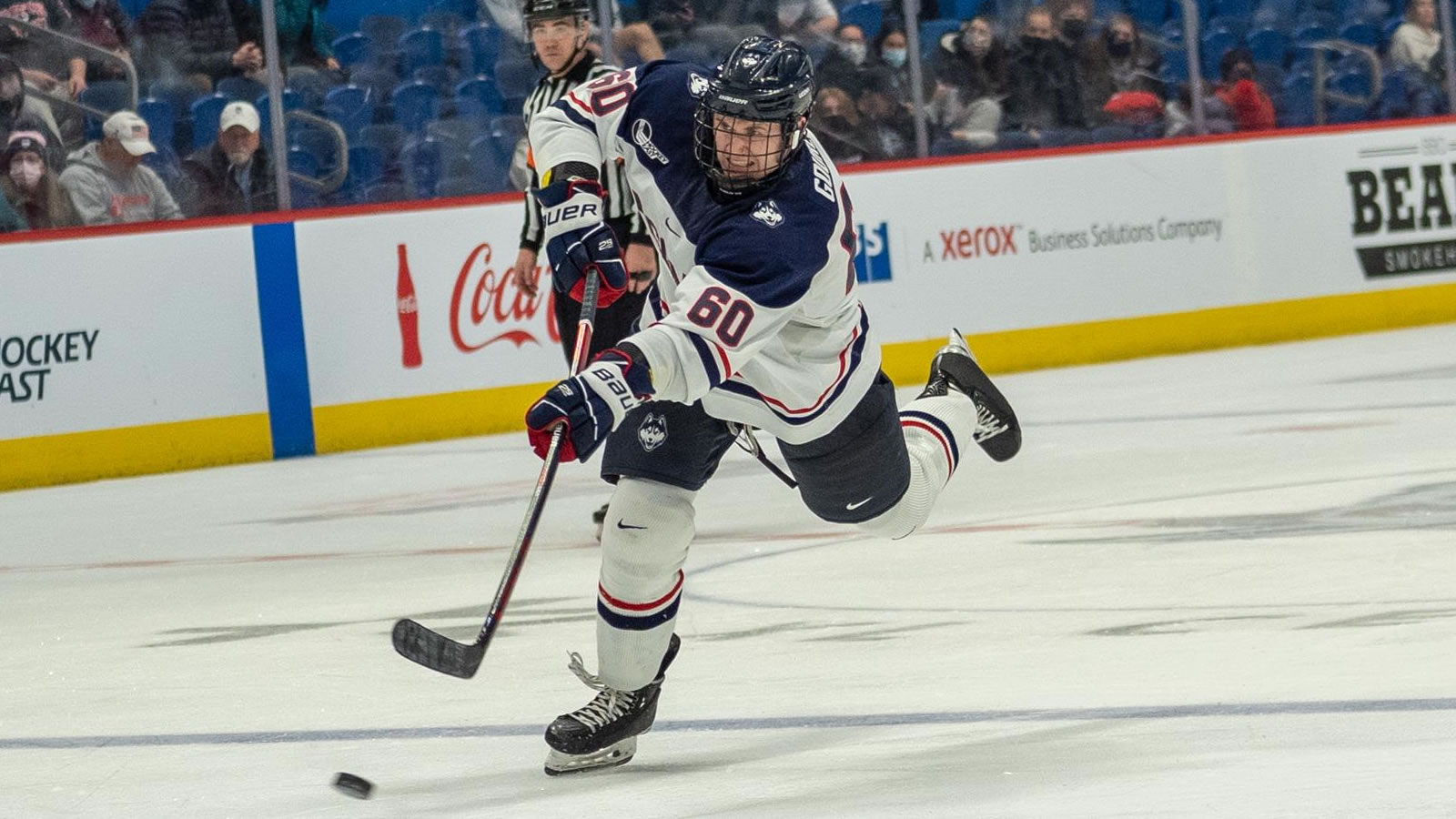 CHESTNUT HILL, Mass. - The UConn Huskies won their sixth-straight Hockey East game on Friday night, beating the Boston College Eagles at Kelley Rink, 6-4. The Huskies never trailed on Friday night, scoring four in the first period as they get their second this season at BC's Kelley Rink to take the season series with the Eagles.

Five different Huskies found the back of the net led by grad student Jarrod Gourley (Calgary, Alberta) who recorded his first career multi-goal game with a pair of scores. Seniors Carter Turnbull (Nainamo, British Columbia) and Jachym Kondelik (Bundejovic, Czech Republic) each had a goal and an assist in the win.

BC got two goals apiece from Casey Carreau and Liam Izyk.

The Huskies got the game's first goal just 1:25 in as Shlaine converted on a 2-on-1 chance, burying a feed from Ryan Tverberg (Richmond Hill, Ontario) on an open net from the left circle, his fifth of the season.

BC answered at 4:49, tying it up on a Casey Carreau goal but the Huskies took the lead back at 9:49. Coming off a turnover in the BC zone, Vladislav Firstov (Yaroslavl, Russia) got his second assist of the night, feeding Kondelik in the right circle who waited to find his spot, and buried it to the far post past Dop for his 11th on the year.

The Eagles answered right back again as Liam Izyk scored his first of two in the peiord at 11:20 to make it 2-2. Gourley gave UConn its lead back just 1:36 later on his first of the period. Turnbull carried up the right boards and with two defenders on him, fed a pass back to Gourley in the slot area who put his one-timer chance in the top-left corner for a 3-2 lead.

Gourley made it 4-2 at 14:12, scoring right off a face-off in the BC zone as Hudson Schandor (North Vancouver, British Columbia) won the puck straight-back and the grad transfer blasted a slapshot through traffic and past Dop for his third goal of the season. BC would get one back in the final minute of the first as Izyk make id 4-3 with 39 seconds to play before the break.

The Huskies pushed their lead to 5-3 at 7:16 as Turnbull was able to convert on a costly BC turnover in their zone. Picking-up a loose puck, the senior captain had a clear path on net and got Dop out of position and tucked a shot in for his eighth and third in as many games.

UConn went up 6-3 midway through the second as Kondelik fed Schandor up ice and he dished a backhanded pass to O'Neil who finished off a back-hander at the left post for his fifth of the season at 10:01.

BC got one back in the third at 15:34 as Carreau picked-up his second goal of the night. Hanson got the initial stop on Connor Joyce but Carreau was along in front to clean up the rebound to make it 6-4 UConn.

The Huskies are back at home at the XL Center next Friday night, February 18 to host nationally ranked Massachusetts in the first game of two-game home-and-home Hockey East series.