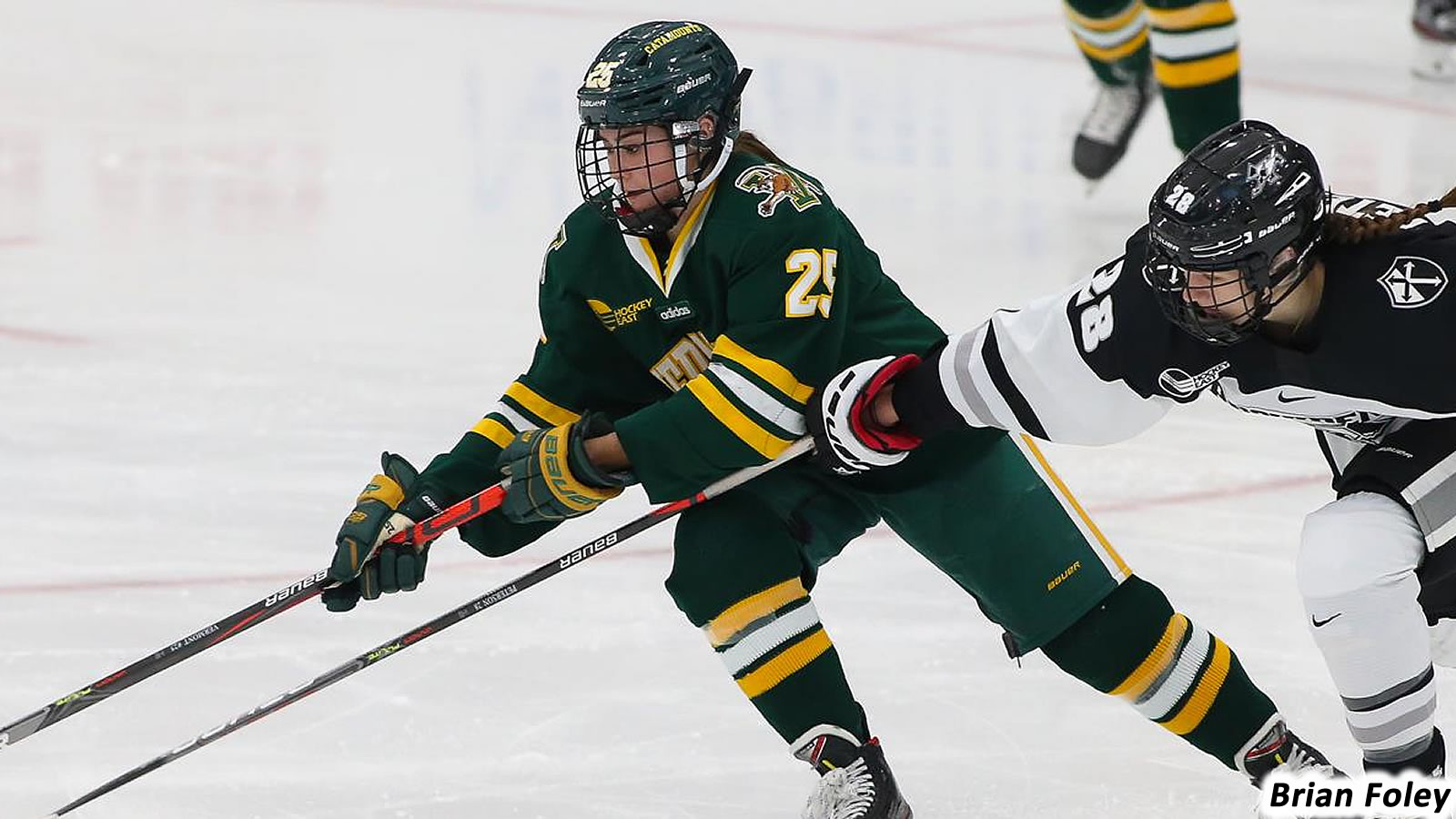 ORONO, Maine - Vermont won their ninth straight game Saturday afternoon defeating Maine 3-1 at Alfond Arena in Hockey East action. Hailey Burns scored the game-winning goal as UVM set a program record with its 19th win of the season. With the win the Catamounts maintained their three-point advantage over UConn for second place in Hockey East.

"Today was another real grind and Maine deserves a ton of credit for playing us extremely tough in both games," said Head Coach Jim Plumer. "Our defensive effort was stellar again and I'm so proud of our resilience as a team. We got a couple of timely goals and benefited from another very strong goaltending performance by Jessie McPherson. This team has matured so much over the course of the season and I'm so happy for them that we can continue to find ways to win. It's certainly special to heal a program record today but I'm certain this group wants more. We are looking forward to honoring our seniors next weekend."

- After an extended period of pressure for Maine the Catamounts struck first with a perfectly executed breakout. Lily Humphrey won a puck battle and got the puck to over to Bella Parento by the Vermont net. Parento spotted Alyssa Holmes exiting the zone between the two defensemen and fed a pass to her sending her in alone with Maine's Jorden Mattison. Holmes went to her backhand and then quickly to her forehand before firing a wrist shot just past Mattison's glove for her second goal of the season 12:36 into the first period.

- 3:55 into the second period Hailey Burns scored on a great individual effort to double the Catamounts advantage. At center ice, she pokechecked the puck off a Maine forward's stick and entered the Black Bears zone one-on-one with a Maine defender. She blew by the defender to the outside before firing a perfect shot just under the bar to make it 2-0.

- The Black Bears pulled the goalie for an extra attacker with 3:19 left in regulation and were rewarded just 11 seconds later. Morgan Trimper deflected an Olivia King point shot past UVM's Jessie McPherson to make 2-1.

- Just 45 seconds later Corinne McCool sealed the Vermont win with an empty-net goal. McCool received the puck along the boards and calmly skated the puck through traffic and to center ice before firing it home. Alyssa Holmes and Ellice Murphy earned assists on the play.

- Jessie McPherson made 21 saves in net for the Catamounts securing her ninth straight win, dating back to December 10. Over that stretch she has made 212 saves on 221 shots, a .959 save percentage.

The Catamounts final home series of the regular season is next weekend as Vermont hosts Boston University in a two-game set. UVM will face the Terriers at 2 p.m. on Friday and 3 p.m. on Saturday. Saturday is Senior Day presented by the UVM Alumni Association. Both games will air live for free on CollegeSportsLive.