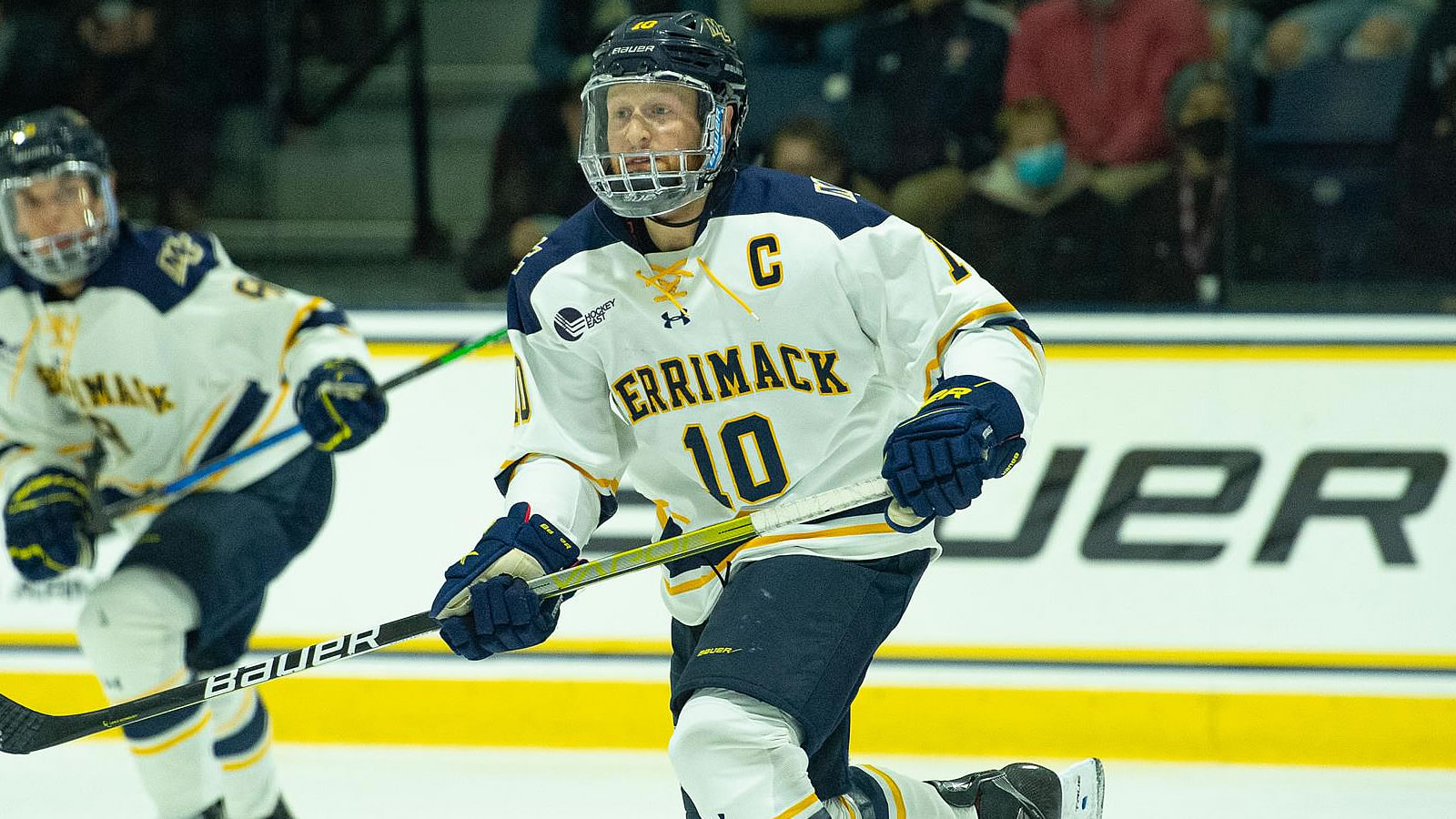 NORTH ANDOVER, Mass. - The line of Max Newton, Steven Jandric and Alex Jefferies was too much to handle Saturday night at Lawler Rink, as the Merrimack College men's hockey team rolled to a 5-0 win over Maine.

The trio put up gaudy numbers on the evening, as they combined for 10 points, 20 shots on goal and a +8 rating. Newton led the way with four points on a goal and three assists, while Jandric lit the lamp twice and added an assist and Jefferies had a trio of points as well on a goal and two helpers.

Hugo Ollas was the story on the other side of the rink. The freshman netminder turned in a perfect effort on 28 shots to claim his first collegiate shutout and he has now claimed the win in five of his last six starts to help lift the scalding hot Warriors through the new year.

Elsewhere on the scoresheet, Ben Brar had a nifty tip-in goal on the power play in the second period and Declan Carlile hit the 20-point mark on the season after the defenseman tallied a pair of assists.

- Merrimack came out and played one of its most complete periods in the opening stanza. The Warriors had pace and created plenty of chances on the way to a 20-7 edge in shots on goal.

- The hosts got what they deserved just over five minutes in when Jefferies struck for the second time in as many nights. On the first power play chance of the game, Newton blocked a clearance attempt at the near half wall and slipped a pass far side to Jandric. The graduate student held it for a moment, then sent a centering feed that Jefferies got a hold of in the slot for the tally.

- Merrimack's momentum stayed alive during the next few minutes and it led to another marker. Carlile made a nice play at the right point to hold the zone, then played it near side for Logan Drevitch. After Drevitch's shot was stopped, the rebound bounced out for Newton, who put home his team-leading 11th goal of the season.

- On the other end of the ice, Ollas was tested in the final few minutes, but he stood tall on all seven shots he saw to keep it a two-goal game after 20 minutes.

- Just over six minutes into the second, the Warriors found themselves on an extended 5-on-3 man advantage after a faceoff violation went against Maine and the red hot power play unit did not disappoint. Zach Vinnell swung around the point, then left a drop pass for Carlile, who blasted a one-timed shot towards the goal that Brar tipped from just outside the crease for his team-best fifth power play marker of the year.

- Maine upped the pressure in the second half of the period, but Ollas continued to make life difficult for the visitors, as he made another 14 stops to make it 21 on the evening.

- Merrimack did not let Maine creep back into the game, as it took just four and a half minutes into the third period for the Warriors to stretch the lead to four. Jefferies cycled a puck below the goal line for Newton, who then slipped it to Jandric at the left faceoff dot. He made a slick deke to avoid a defender, then brought the puck quickly to his forehand for a sensational finish.

- Jandric capped the scoring three minutes later with another in-tight finish. Merrimack caught the Black Bears on a line change, as Jefferies entered the zone from the left wing, then had a quick set of passes with Newton to set up a one-timer. The original Jefferies drive was stopped, then the rebound was sent to the crease for Jandric, who put it home amid a horde of bodies.

- The Warrior penalty kill was put to the test one more time midway through the period, but Ollas and the Merrimack defense stonewalled the Maine attack to finish off the victory.

- Newton's four points matches his previous single game career-high, which was set Feb. 7, 2020 at Alabama-Huntsville, while he was still with Alaska.

- The trio of points marks a single game career-high for Jefferies.

- It also matches a single game career-high for Jandric, who had previously had three points on two occasions, the most recent Feb. 16, 2019 against Bowling Green while he was also still a Nanook.

- Merrimack's power play continues to be the one of the hottest in the nation. It's now converted in nine straight games and was 4-for-8 on the weekend.

- Newton reached the 30-point plateau in the game, which makes him the first Warrior to do it since Brett Seney ended the 2017-18 campaign with 32 points.

- Carlile led all skaters with three blocked shots and is running away with the lead in the category in Hockey East. He now has 57 blocks on the season and tops the league by 15. His +20 rating is also only matched by Providence's Guillaume Richard in the league.

- Merrimack's 44 shots on goal is the second-highest total of the season behind its 50-shot effort Jan. 8 against Bentley.

- Ollas has been one of the nation's top goalies since the calendar turned to 2022. He has a 5-1-0 record, 1.30 goals against average and .949 save percentage to help spark the Warriors to seven wins in their last eight games.

Merrimack concludes its three-game home stand Tuesday with a 7:00 pm puck drop at Lawler Rink against Connecticut. The contest has major implications in the Hockey East standings, as the teams are separated by just one point with both sides jockeying for a coveted top-4 spot to claim a first round bye and home quarterfinal game in the Hockey East tournament.