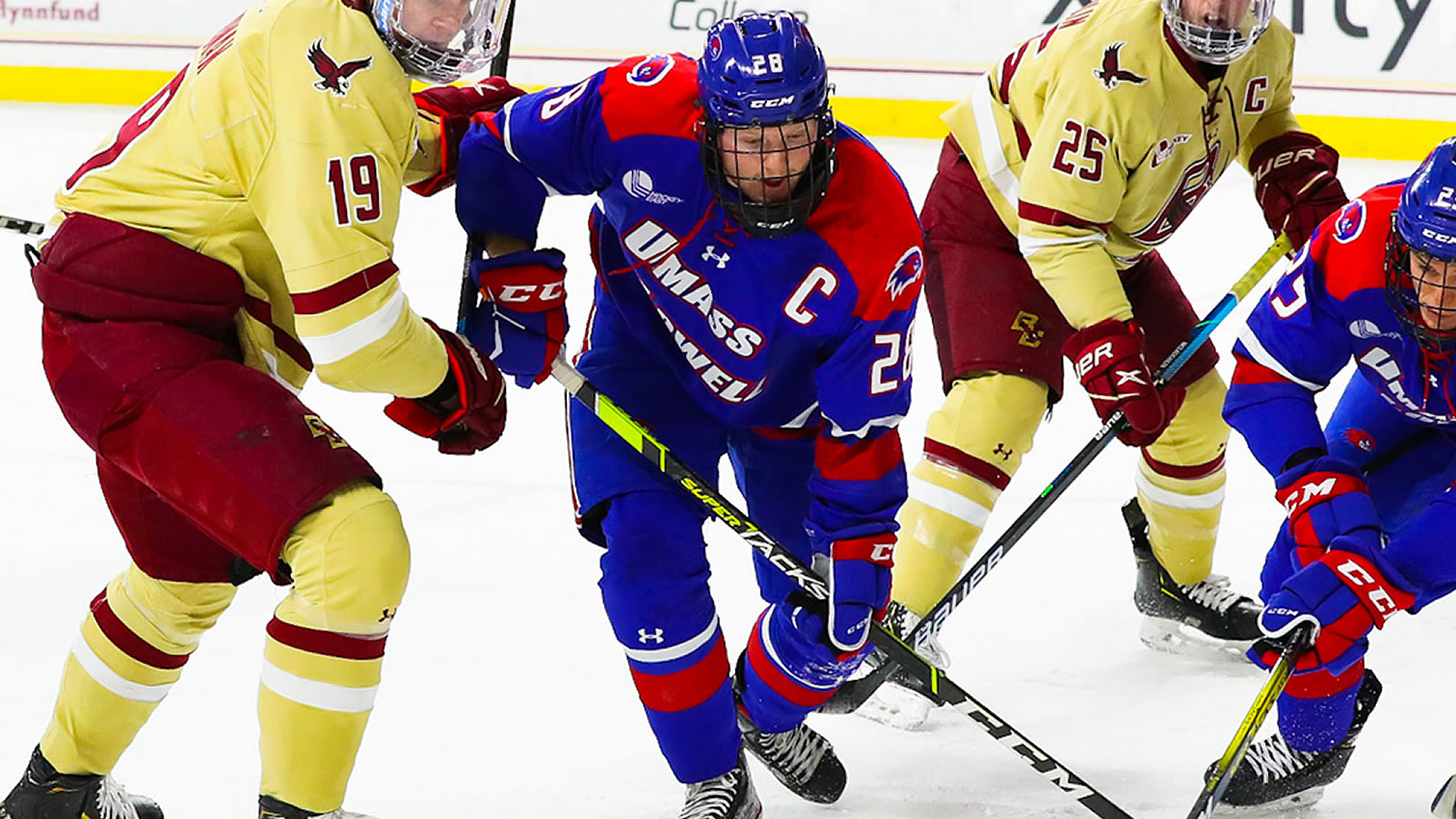 In total, 12 River Hawks found their way onto the scoresheet, including senior goaltender Owen Savory (Cambridge, Ontario). In addition to stopping 13 shots from the Big Green, the experiencedd netminder registered an assist on the River Hawks' first of the night.

UMass Lowell dominated the offense in the opening frame, outshooting the Big Green, 25-2. Despite the aggressive differential, Dartmouth managed to strike first just over 11 minutes into the action off a chance breakaway.

The home crew leveled the score just minutes after Dartmouth's opening shot off a shot from Chambers. Savory shipped the puck along the boards to Lee, who stole it off the stick of a Big Green defenseman. Using his speed to advance into the zone, Lee fired one towards the right pad of Dartmouth's Clay Stevenson. The shot ricocheted back out in front of the net, where Chambers was able to knock it over Stevenson's left pad to make it a 1-1 game.

Three minutes later, the River Hawks were back on the attack. Tripped up along the boards, Cole kept possession long enough to forward the puck along to Knoblauch. Going one-on-one with his defender, the senior flexed his stickhandling prowess as he dangled the puck around his man to Sodergren at the right point. Wasting no time, the veteran quickly stuffed the shot through the five hole to send UMass Lowell into the first intermission with a 2-1 advantage.

Sodergren kept his scoring streak rolling into the second frame, registering his second of the night at the 12:35 mark. Winning the faceoff, Sodergren sent the puck back to Austin, who fired a quick one at Stevenson. Deflecting the puck, a scrum ensued as both teams tried to gain possession. Getting control, Cole steadied the play and connected with Knoblauch in the nearby circle. Seeing Sodergren in the slot, Knoblauch sent a cross to his linemate, giving him the go-ahead to sneak the puck past an unsteady Stevenson for a 3-1 lead.

Aggressive forechecking from the Big Green allowed them to clock another with three minutes left in the second, forcing a one-goal margin heading into the third.

Late game scoring efforts ultimately decided the non-conference clash, with the River Hawks scoring three goals in a four-minute block in the final minutes. Brushett lit the lamp first after a faceoff violation sent the Big Green to the penalty box with eight minutes remaining. After Stevenson shut down an attempted shot from junior Carl Berglund (Hammaro, Sweden), the forward fed the puck back out to Brushett outside the slot. Quick to react, the junior flicked in a quick wrister to extend the River Hawks' margin to 4-2 with just five seconds left on the extra-man opportunity.

After a Dartmouth retaliation goal just 26 seconds later kept the game within one with just over five minutes to play, the River Hawks doubled up on their offensive strategy. Reaching to keep possession, Lee pushed a pass to freshman Matt Crasa (South Setauket, N.Y.) on the goal line, who centered it to Kaiser in the slot. Free from any defender, Kaiser controlled the pass before firing it over the right skate of Stevenson to reclaim the two-goal differential.

With time ticking down, the Big Green pulled Stevenson in favor of the extra skater. Going-head to-head in the neutral zone, Crasa poked the puck away from Dartmouth's Ian Pierce, forcing the turnover. Crasa then connected with Lee, who tucked in the empty netter to secure the 6-3 win at home.

The River Hawks look to stay hot heading into next weekend, when they host No. 16 Northeastern on Friday, Feb. 11. The crew then takes a trip north to visit New Hampshire for the first time this season on Sunday, Feb. 13.