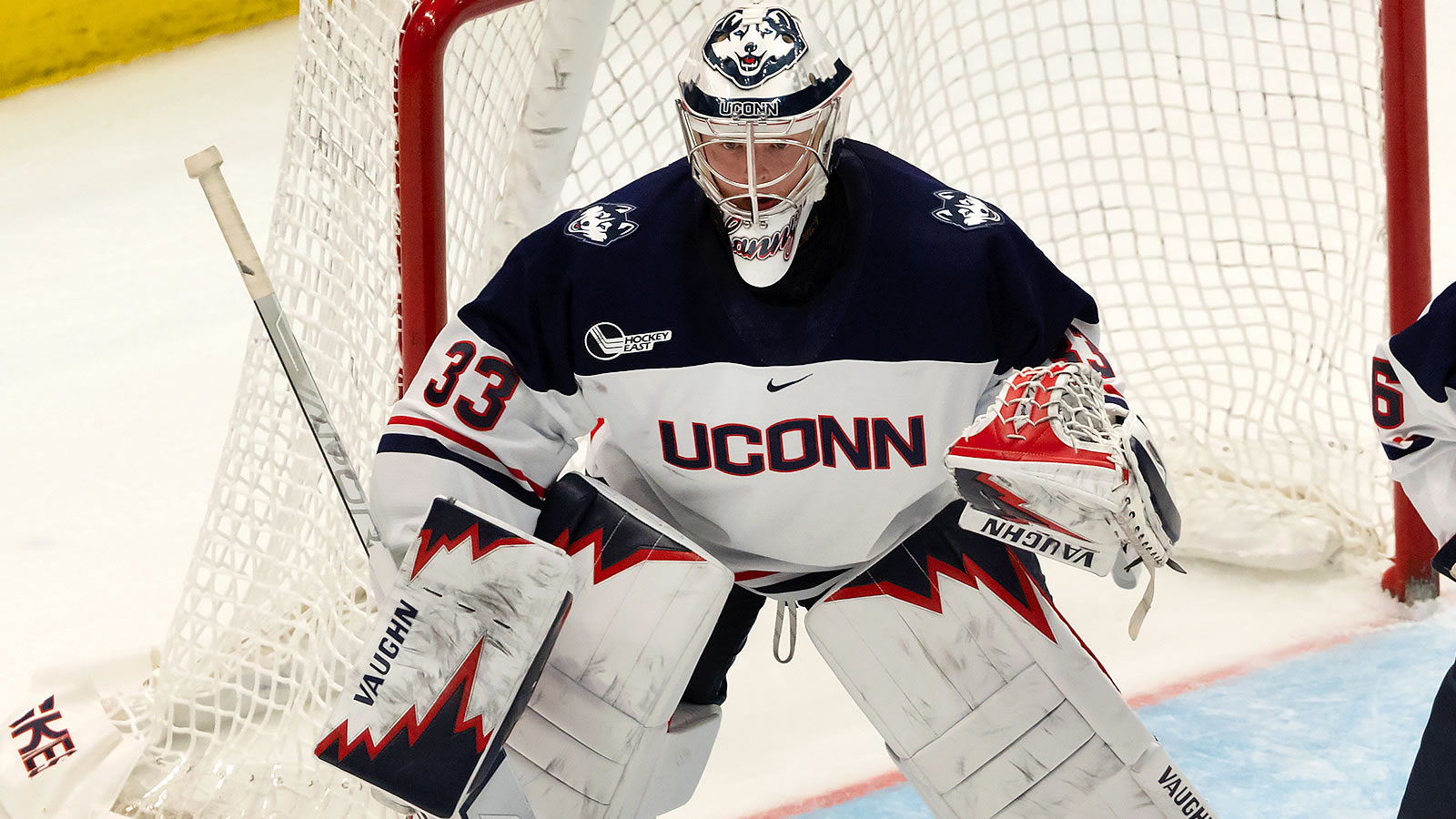 DURHAM, N.H. - UConn got goals from six different Huskies and a 31 save night from graduate student Darion Hanson (East Bethel, Minn.) on the way to a 6-1 win at New Hampshire on Saturday night in Hockey East action.

After a 1-1 first period where Hudson Schandor (North Vancouver, British Columbia) scored the Huskies first goal, UConn exploded for three in the second and two more in the third while Hanson kept UNH off the scoreboard.

UNH got a goal from Tyler Ward and 25 saves from goaltender Mike Robinson.

The Huskies struck for the game's first goal just 4:02 into the action. Shlaine sprung Tverberg up the right boards into the UNH zone. Tveberg slid a pass to an oncoming Schandor up the middle who redirected past Robinson for a 1-0 lead on his third of the year.

UNH evened the game up at 19:19 as Ward scored on a rebound in front in the slot area. Ryan Verrier blasted one on net from out deep and the rebound found Ward in the slot for his fourth of the season.

The Huskies scored three-straight in the second period to grab control of the game. Kondelik got the run started at 4:29, scoring his ninth of the season. On a cross-ice feed from defenseman Harrison Rees (Oakville, Ontario), Kondelik put a nice move on Robinson who kicked the net off the mouring as his shot crossed the line. The referee immediately signaled a good goal for a 2-1 UConn lead.

Turnbull broke up a UNH shot at their blue line and got free for a break-away chance, burying the chance at 11:42 for his sixth of the season and a 3-1 lead for the Huskies.

UConn made it 4-1 at the 13:47 mark as Firstov scored his eighth of the season. The puck cycled to Jarrod Gourley (Calgary, Alberta) at the high point where he fired on net. Firstov was deep in the left circle where he got a stick on it to redirect past Robinson for his eighth goal of the year.

After coming up empty on a power play late in the period, UNH pulled the goaltender with 3:57 left looking for a spark. UConn ended the comeback hope as Artem Shlaine got a break-away empty netter.

Tverberg to his 11th on his own break-away at 17:50, hitting the ice then bouncing back up to finish off a pretty move on Robinson to produce the 6-1 final.

UConn will head to Merrimack on Tuesday, February 8 for a 7 pm Hockey East match-up.