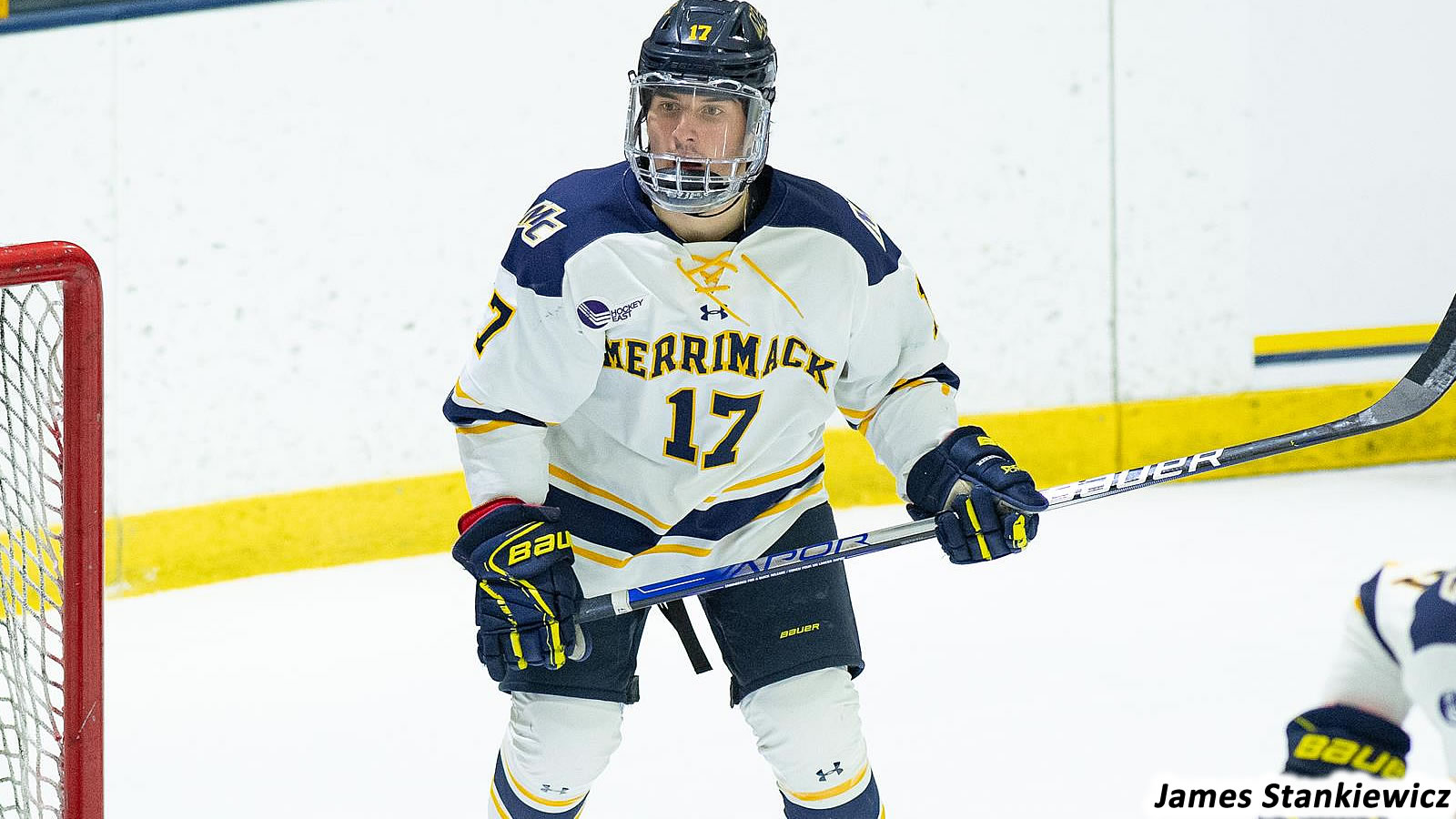 NORTH ANDOVER, Mass. - It was a special night for Mac Welsher, as the junior lit the lamp three times for his first collegiate hat trick to send the Merrimack College men's hockey team to a 5-2 win over New Hampshire Friday night at Lawler Rink.

New Hampshire got on the board first late in the opening period, but the Warriors soared back for three goals in the second period, including two from Welsher and a power play tally from Alex Jefferies. The Wildcats narrowed the gap late in the second, but another power play goal, this time from Zach Vinnell, and a shorthanded empty netter from Welsher in the final minute sealed the deal.

Vinnell and Jordan Seyfert both finished with a pair of points and Zachary Borgiel backstopped the defense with 22 saves for his seventh win on the campaign.

- A week and a half removed from game action, the Warriors came out with plenty of energy that helped them earn a power play in the opening minute, but a couple close chances went by the boards.

- Merrimack continued to get high quality scoring opportunities in the latter stages of the first, including an in-tight wrist shot from Vinnell that rung the pipe, but it was the Wildcats that turned the tides for a late goal to take a 1-0 edge into the first intermission.

- The deadly Warrior power play unit got another chance early on in the second period and Jefferies made the Wildcats pay. After some sustained zone time, Vinnell walked the point, then slid a pass to the left point for Logan Drevitch. The senior played it to the left faceoff dot for Jefferies, who gathered, then crept in before he fired a wrist shot home just over three minutes into the second.

- Merrimack wasn't done after that. Less than 40 seconds later, thunder struck twice thanks to Welsher. After the Warriors defended their own end, Declan Carlile played a puck around the wall for Seyfert in the defensive near corner. The senior made a great play to work it free for Welsher, who broke in on a 2-on-1. He worked his way in-close, then labeled a wrist shot near side to give Merrimack the lead.

- New Hampshire went on the power play not long after and had an incredible chance point blank, but Borgiel was up to the task.

- After a few minutes that included plenty of penalties, but no scoring, Welsher shook free again. In the attacking end, Seyfert put the puck in space behind the goal line for Steven Jandric. The graduate student sent a feed to the slot for Welsher, who ripped home his second of the game with 6:12 to play.

- Momentum started to shift in the final few minutes of the third when the Warriors were called for a five-minute major for contact to the head. New Hampshire converted late in the frame to make it a one-goal game after 40 minutes.

- After the Warriors killed off the remainder of the penalty in the beginning of the third period, they got a power play chance of their own. Vinnell unloaded on a slap shot that sizzled wide, but Max Newton kept possession on the rebound. The graduate student fed Vinnell at center point, then the defenseman sent a pass for Jandric that hit a UNH stick, jumped up in the air, and just got past the goal line.

- The Wildcats mustered nine shots on goal in the closing stanza, but Borgiel stood tall on all of them, which included a late power play.

- On that late power play, the Wildcats pulled their goalie and Welsher made them pay. Liam Dennison got in a shot lane to block a shot, then the loose puck fell to Welsher. The junior found the back of the net from just inside his own blue line to put the icing on the victory.

- Newton has points in eight of his last nine games with three goals and seven assists.

- Arvedson has an assist in both of his last two appearances.

- Welsher ended with a +3 rating and Vinnell, Seyfert and Zach Uens all registered +2 ratings.

- Newton, Welsher, Liam Walsh and Mark Hillier all ended the night at .500 or better at the faceoff dot. The team won 26 of 48 faceoffs overall.

Merrimack completes the home weekend Saturday at Lawler Rink when Maine comes to town. Puck drop is set for 7:00 pm.