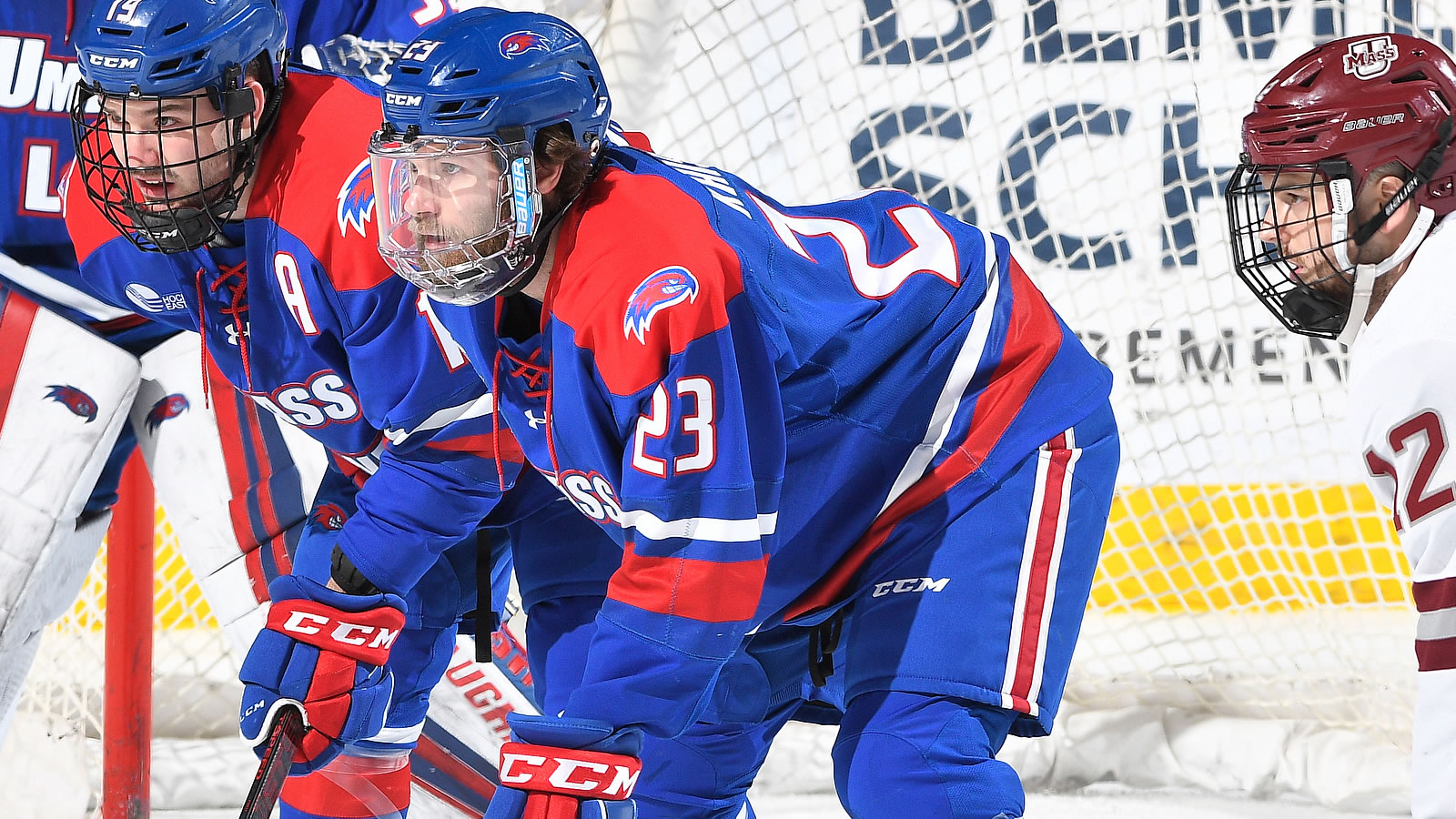 Three River Hawks finished the night with two points apiece, with Kaiser and junior Ryan Brushett (Montreal, Quebec) leading the way with a goal and an assist each. Joining the two upperclassmen, freshman Isac Jonsson (Ängelholm, Sweden) dished out a pair of assists for a career-high two points and the first multi-point game of his career. Joining his classmate with a career-first of his own, Cole's third period shorthanded goal marked his first collegiate tally.

"I am extremely proud of the guys tonight. They came from behind twice to win on the road. That is difficult with any Hockey East opponent," commented Head Coach Norm Bazin. "Our secondary scoring came up big again tonight."

The Eagles found their way onto the scoreboard first in the clash after maneuvering their way past the River Hawks defense just under seven minutes into the action. Unwilling to enter the first break in a deficit, UMass Lowell retaliated with strong pressure in the zone and aggressive forechecking through the remainder of the frame.

Using their physicality to their advantage, the River Hawks pushed through the Boston College backline to fire several quality shots towards Eagles netminder Eric Dop. The high-energy offense eventually cracked through BC's blueline late in the frame. Fending off a pair of Eagles defenseman, Brushett sent a pass along to boards to an unmanned Kaiser behind the net. Settling the puck, Kaiser set up Brushett at the point, who clapped in a quick one-timer to level the score at 1-1 heading into the first intermission.

The second period proved to be a stalemate for both sides, with neither team able to light the lamp. Although the Eagles maintained a slim 9-7 advantage in shots on goal, the River Hawks proved to be more electric on attack, registering several quality shots on the doorstep.

With both teams in a deadlock as the puck dropped for the third, the Eagles claimed the lead just over two minutes into the period after an untimely penalty against the River Hawks sent them to the box.

The Eagles threatened to extend the lead midway through the final frame as the River Hawks brought back the penalty kill unit. Forcing a turnover at the blueline, UMass Lowell regained momentum as the puck skidded along the boards to sophomore Brehdan Engum (Burnsville, Minn). Dumping the puck towards the Eagles zone, junior Carl Berglund (Hammaro, Sweden) picked up the pass and sent the cross to Cole on the left wing. With a step over BC's Trevor Kuntar, Cole used his advantage and one-timed the puck past Dop to get the River Hawks back in the game.

"I'm happy to see (Owen) Cole score such a meaningful goal as his first after practicing well this week," remarked Bazin on the rookie's shorthanded tally.

As the possibility of overtime drew closer, UMass Lowell made a final push to claim a lead. With just under two minutes left in the action, Jonsson connected with Brushett in the neutral zone. Getting tangled with a BC defenseman after a 3-on-1 tussle, Brushett lost control of the puck. A lucky deflection off the skate of an Eagles' skater placed the puck in front of Kaiser, who fired it in to secure the 3-2 win for the River Hawks.

"Kaiser, Brushett, sophomore Nik Armstrong-Kingkade (Alexandria, Va.), and Jonsson were impactful the majority of the game. I think our team got better as the game progressed," said Bazin. "We will now focus our attention on our next opponent."

The River Hawks return to the friendly confines of the Tsongas Center on Saturday, Feb. 5, for a non-conference clash with Dartmouth at 7 p.m.