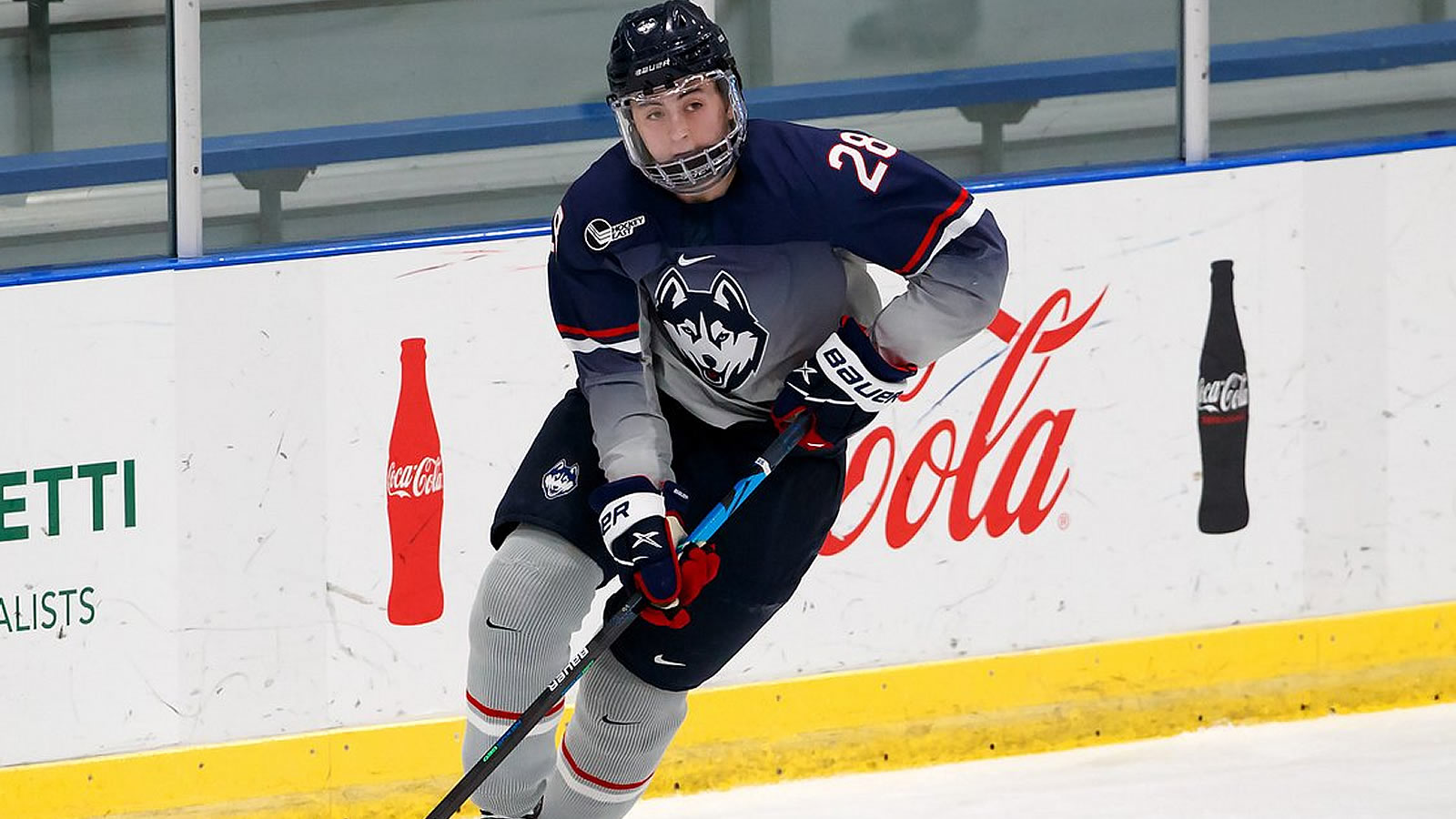 HARTFORD, Conn. - UConn sophomore Ryan Tverberg (Richmond Hill, Ontario) scored on a break-away at 15:43 in the 3rd period to deliver the game-winning goal as the Huskies took down No. 17 nationally ranked Providence Friday night in Hockey East play at the XL Center.

Tverberg ended a 12-game scoreless drought with his 10th on the season. Tverberg also had an assist on sophomore John Spetz's (Oak Ridge, N.J.) goal in the second period that tied the game up at 1-1. Spetz returned the favor in the third, starting the break-out of the UConn zone that sprung Tverberg.

Providence had a 1-0 lead early in the second on a Max Crozier goal. UConn held a 28-21 edge on shots with grad student Darion Hanson (East Bethel, Minn.) making 20 stops to earn his 12th win on the year.

Providence finished 1-4 on the power play and killed off all six UConn extra-man chances. Jaxson Stauber stopped 26 for the Friars.

Both teams skated to a scoreless first period. The Huskies got a pair of power plays but went to the box themselves early in each to negate the extra man opportunity. Shots were 9-6 Providence over the first 20 minutes.

The Friars, who carried a power play over into the 2nd period, needed just 47 seconds to take the lead on Crozier's sixth goal of the season. Nick Poisson found Parker Ford at the high point who fed Crozier on the left wing for a big one-time slapshot that beat Hanson to make 1-0.

UConn quickly tied it up at 1:58 as Spetz scored his second goal of the season. After holding possession in the zone, Vladislav Firstov (Yaroslavl, Russia) slid the puck to Spetz up high who rifled a wrister that beat a screened Stauber to knot the game up at 1-1.

The Huskies looked like the went up 2-1 at 14:11 on their first shorthanded goal of the season but a video review wiped off the goal. Chase Bradley (St. Louis, Mo.) got a break-away chance with Stauber making the stop but then getting pulled off of the crease in the ensuing pileup. Jachym Kondelik (Budejovic, Czech Republic) banged in the rebound but the Providence bench challenged the play and under review it was ruled that Bradley interfered with the goaltender, taking the goal off the board.

UConn got the game-winner at 15:43 as Tverberg scored on a break-away chance. Spetz broke the puck out and up to Artem Shlaine (Moscow, Russia) who fed Tverberg up the right wing. The sophomore beat the defender to the net and Stauber to the far post, tucking his shot past the outstretched pad for a 2-1 lead.

The Huskies head up to New Hampshire on Saturday night for a 7:30 pm Hockey East match-up.