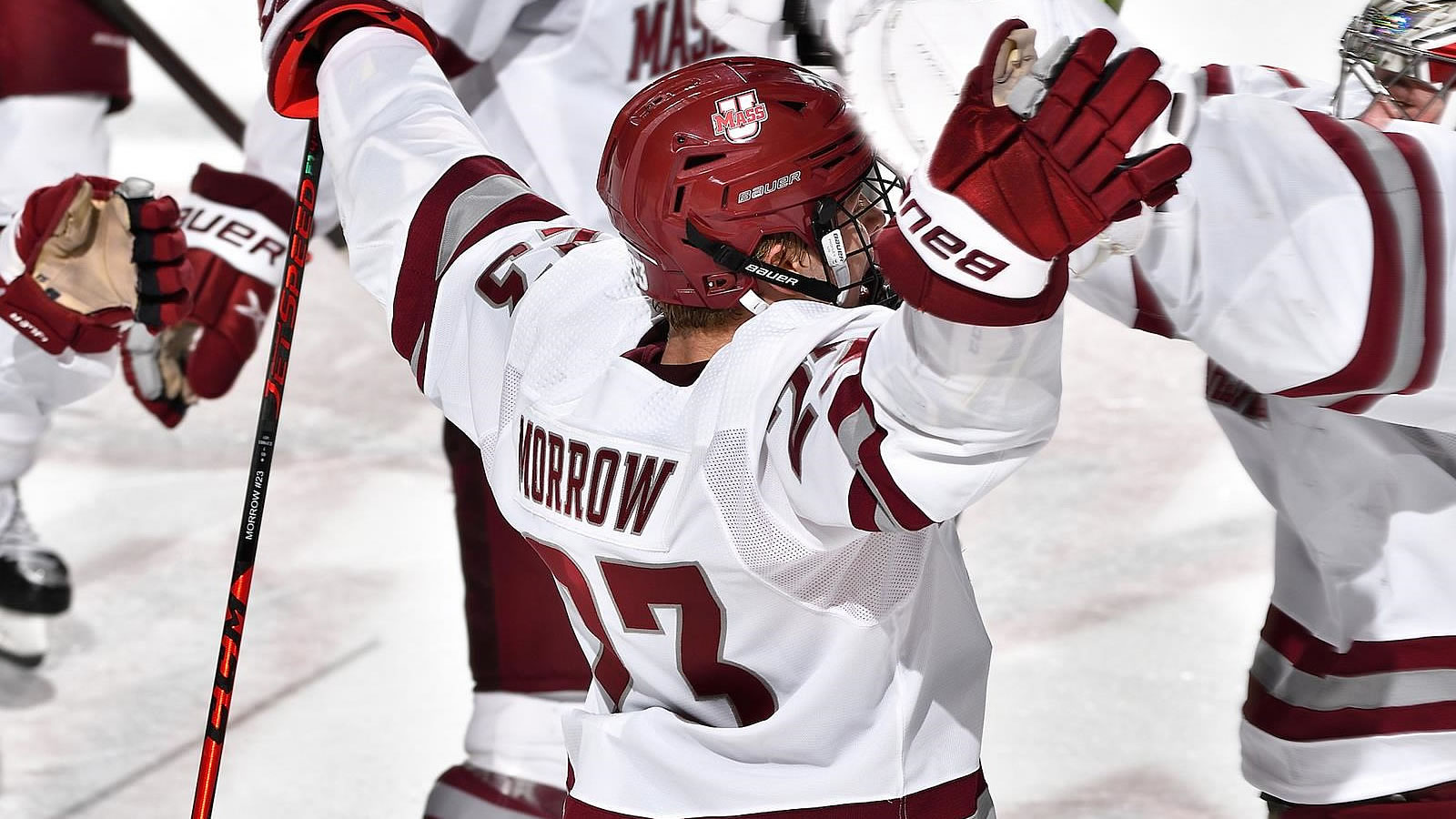 LOWELL, Mass. - Freshman Scott Morrow scored his 10th of the season to give No. 9/8 Massachusetts hockey its first lead of the day with less than three minutes to go in regulation, as the Minutemen rallied for a 4-3 win at No. 14 UMass Lowell on Sunday afternoon at the Tsongas Center. With the victory, UMass improves to 13-8-2 overall, 10-4-2 in Hockey East play, while the River Hawks fall to 14-6-3 overall and 11-5-1 in league action.

"We're on the road against the No. 1 team in the league, so that's a huge win, but I think for the first time this year I felt like I saw the identity of this team and what it needs to be," said UMass head coach Greg Carvel. "We inserted Taylor Makar and Jerry Harding in the lineup, we wanted to have as much size as we could against these guys, and they were big factors in the game. That's one of the top wins I've had since I've been at UMass, very proud of our group."

UMass Lowell opened the scoring 1:38 into the first. Carl Berglund collected the puck from Sam Knoblauch and found Andre Lee alone in the slot. Lee slid the puck underneath goaltender Matt Murray to put the River Hawks on top.

Massachusetts responded 1 minute, 50 seconds later when freshman Lucas Mercuri shoveled a backhander through traffic and past Owen Savory for his fourth of the season off a feed from Ryan Ufko and Ty Farmer at the points.

UMass Lowell regained the one-goal cushion before the intermission, however. Brehdan Engum sent the puck ahead to Lucas Condotta who skated in alone on Murray for the tally at the 15:08 mark with Jon McDonald earning the secondary helper. The play was reviewed for potential offsides but the call on the ice was upheld.

Makar appeared to have netted the equalizer for the Minutemen 1:37 into the second period, cleaning up a loose puck in the crease, but upon review the goal was overturned.

Senior Bobby Trivigno ultimately tied the score at two with his 13th of the season, firing a shot through a screen on the power play at the 15:42 mark of the second with assists going to freshman Scott Morrow and Ufko.

The River Hawks once again pulled in front, 10:29 into the third as Matt Crasa put back a rebound from Lucas Condotta and Jon McDonald on the power play.

Makar then tied the score at 3-3 with his first collegiate tally, going five-hole on Savory off an offensive zone faceoff win by junior Eric Faith and a dish from sophomore Aaron Bohlinger at 13:39.

Morrow followed with the deciding tally, 17:12 into the frame, crashing the net and knocking in his own rebound.

The teams finished even in shots at 31 apiece and the Minutemen were 1-for-3 on the power play, while UMass Lowell was 1-for-4. Murray had 28 saves on the afternoon and Savory stopped 27.

Morrow and Ufko both had multi-point performances on the day, Morrow with a goal and an assist and Ufko with two helpers.

UMass will be back in action on Friday, February 4, when the team will open a two-game set against LIU at the Mullins Center at 7 p.m.