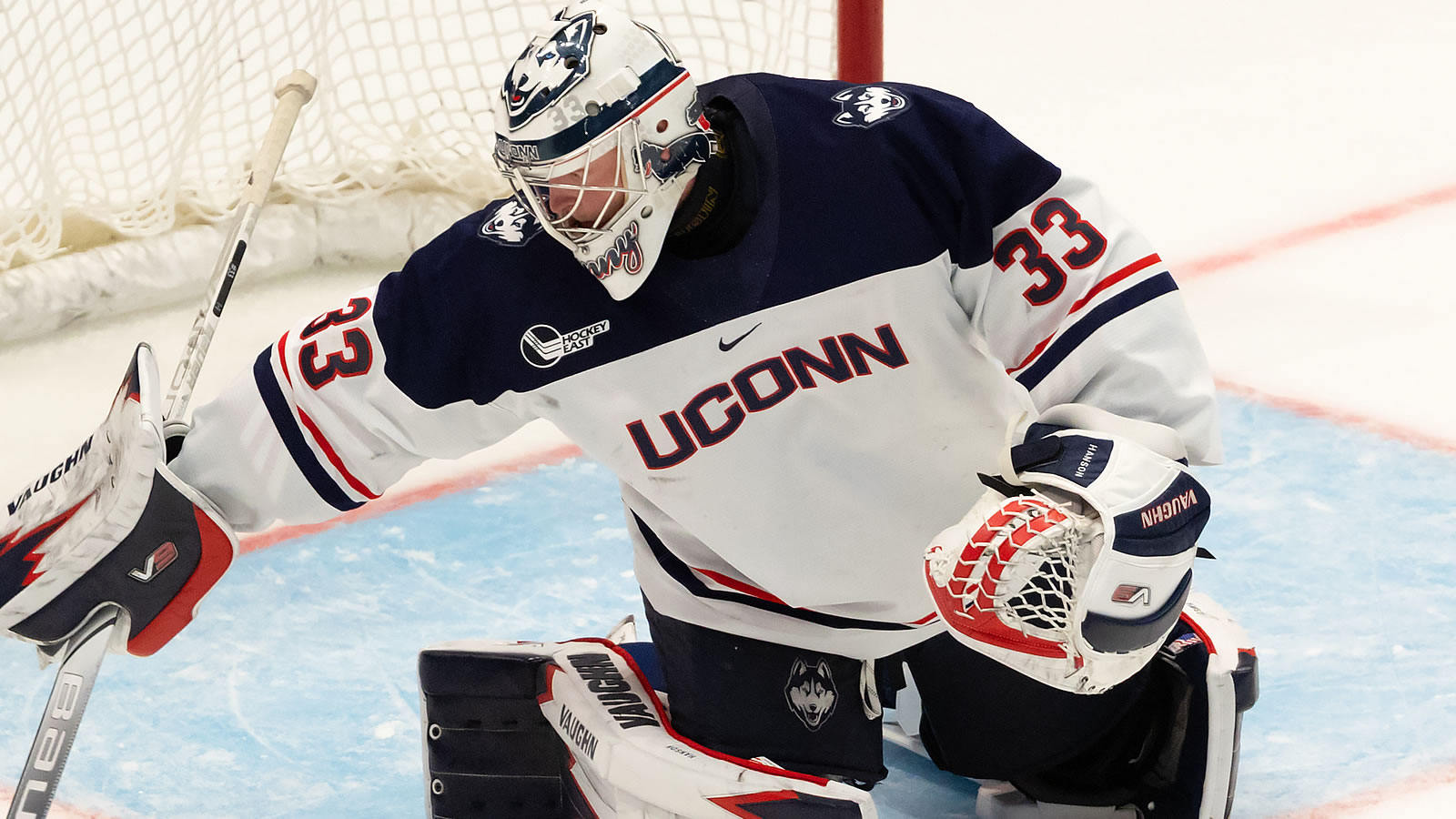 Senior goalie Darion Hanson made 25 saves for the Huskies
UConn Falls to Quinnipiac, 2-0

BRIDGEPORT, Conn. - The UConn Huskies dropped a 2-0 decision to the No. 2 nationally ranked Quinnipiac Bobcats in the championship game of the Connecticut Ice tournament at Webster Bank Arena on Sunday night.

The Huskies saw their three-game win streak snapped as they fall to 12-11-0 overall with the loss. It was the third time this season UConn was shutout in a loss. The Bobcats improved to 21-2-3 overall and recorded their 12th shutout of the season, tying the NCAA record.

After two scoreless periods of tightly played hockey, Quinnipiac ended the scoreless drought at 7:11 in the third with Desi Burgart scoring off a rebound to provide the eventual game-winner.

UConn out shot QU 29-27 on the night and 13-9 in the third period but couldn't crack goaltender Yaniv Perets. The Huskies pulled the goaltender in the closing minutes but QU sealed the win with an empty net goal by Ethan de Jong with 39 seconds left.

Grad student Darion Hanson (East Bethel, Minn.) made 25 saves in the loss. Burggart stopped 29 to earn his ninth shutout of the year.

The Huskies outshot QU 9-6 in the first period and killed off a Bobcat power play. UConn got a power play chance late in the period but came up empty as well.

QU dialed up the offensive pressure in the second putting 12 shots on Hanson but the UConn netminder stood tall sending the game scoreless to the third. UConn and QU both came up empty on their final power play chances of the game in the second period.

The Bobcats finally cracked Hanson, who played in his 100th career game on Sunday. QU's Ty Smilanic broke in on net putting a shot on Hanson who got the initial stop but Burgart was there in front to chip in the rebound for his fifth of the year and a 1-0 lead.

With the UConn goaltender off the ice in the closing minutes, QU iced away the win and title with 39 seconds left as Olivar Chau broke de Jong free up ice for the empty net goal, his ninth of the season.

UConn is back in Hockey East play next weekend, hosting Providence at the XL Center on Friday night and heading up to New Hampshire on Saturday.