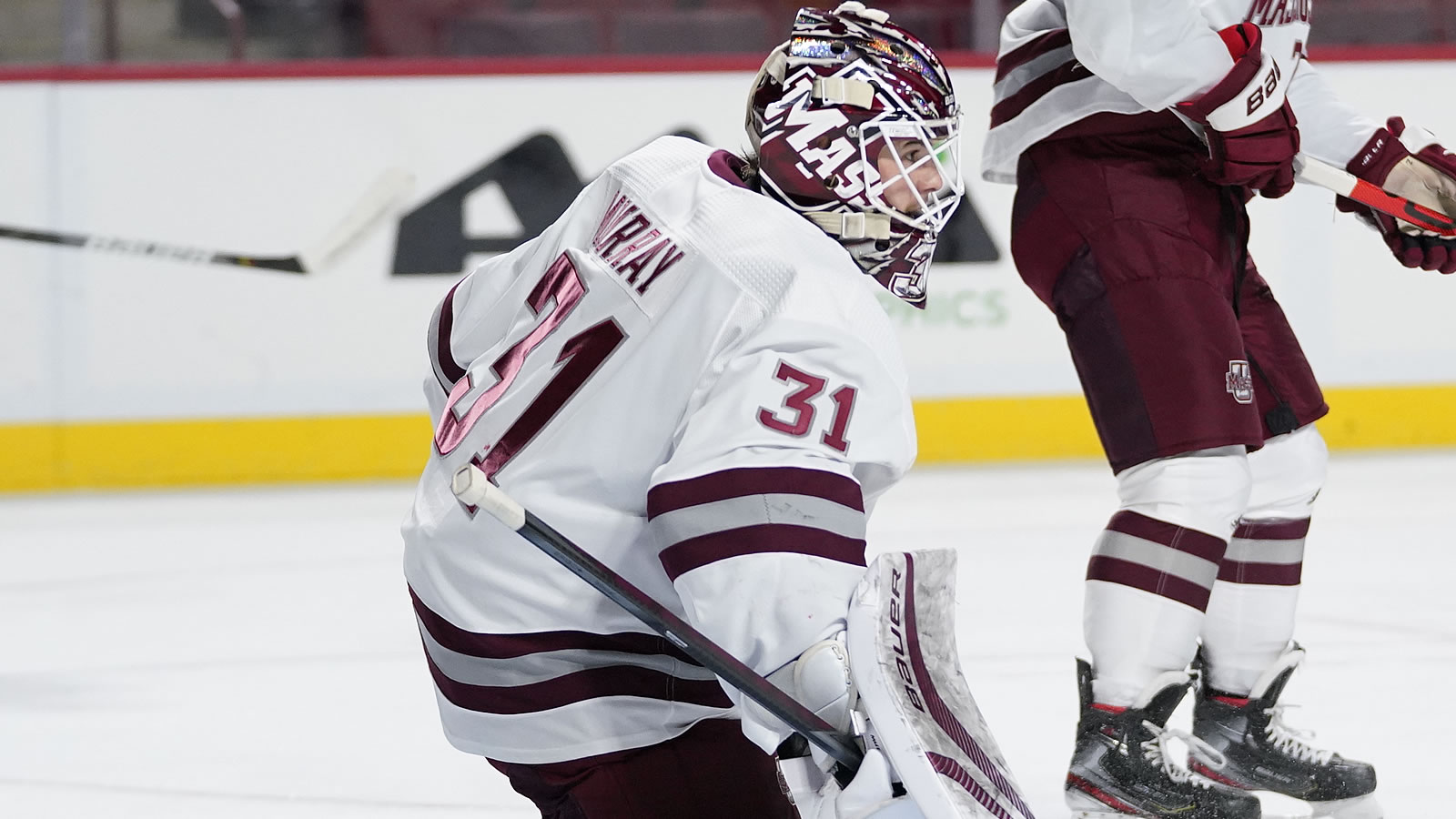 "Obviously an outstanding effort," said UMass head coach Greg Carvel. "To me, it was a complete 60-minute game. We got a couple bounces early and we really rode that wave the rest of the way. I thought we played outstanding defensive hockey, didn't give up much. I thought we were outstanding tonight against a very good Northeastern team. I'm very happy and I can feel this team starting to come together. It's a good time of year for these guys to start taking steps forward.

Graduate student Cam Donaldson opened the scoring just 1:22 into the contest. After junior Eric Faith won the offensive zone draw back to senior Slava Demin, Donaldson crashed the net and put back Demin's rebound for his first goal as a Minuteman.

Senior captain Bobby Trivigno then doubled the lead less than a minute later, muscling his way past a Northeastern defender to connect with an outlet feed from classmate Garrett Wait and skating in alone on Devon Levi for the tally at the 2:13 mark.

Trivigno struck again 9:05 into the opening frame, knocking the puck into an open net at the back post from Wait and freshman Scott Morrow.

Freshman Ryan Lautenbach added UMass' fourth of the period at 13:22, going bar down to chase Levi from the net with freshman Lucas Mercuri and Demin collecting the assists.

Mercuri redirected a backhander from junior Cal Kiefiuk at the net front for the Minutemen's fifth of the evening, 6:11 into the second period. Junior Reed Lebster earned the secondary helper on the play.

Sophomore Josh Lopina later capped the scoring with a power-play goal from Wait and Trivigno at the 11:43 mark as UMass went 1-for-5 with the man advantage on the night and a perfect 3-for-3 on the penalty kill.

Goaltender Matt Murray made 27 saves en route to his 14th career shutout and improved to 12-6-2 on the season. UMass out-shot Northeastern, 34-27 in the contest.

Four Minutemen had multi-point nights, led by Trivigno (2g, 1a) and Wait (3a) who contributed three points apiece, while Mercuri (1g, 1a) and Demin (2a) each registered two.

UMass will be back in action on Tuesday, January 25, as the squad is set to host Boston University at 7 p.m. on NESN.