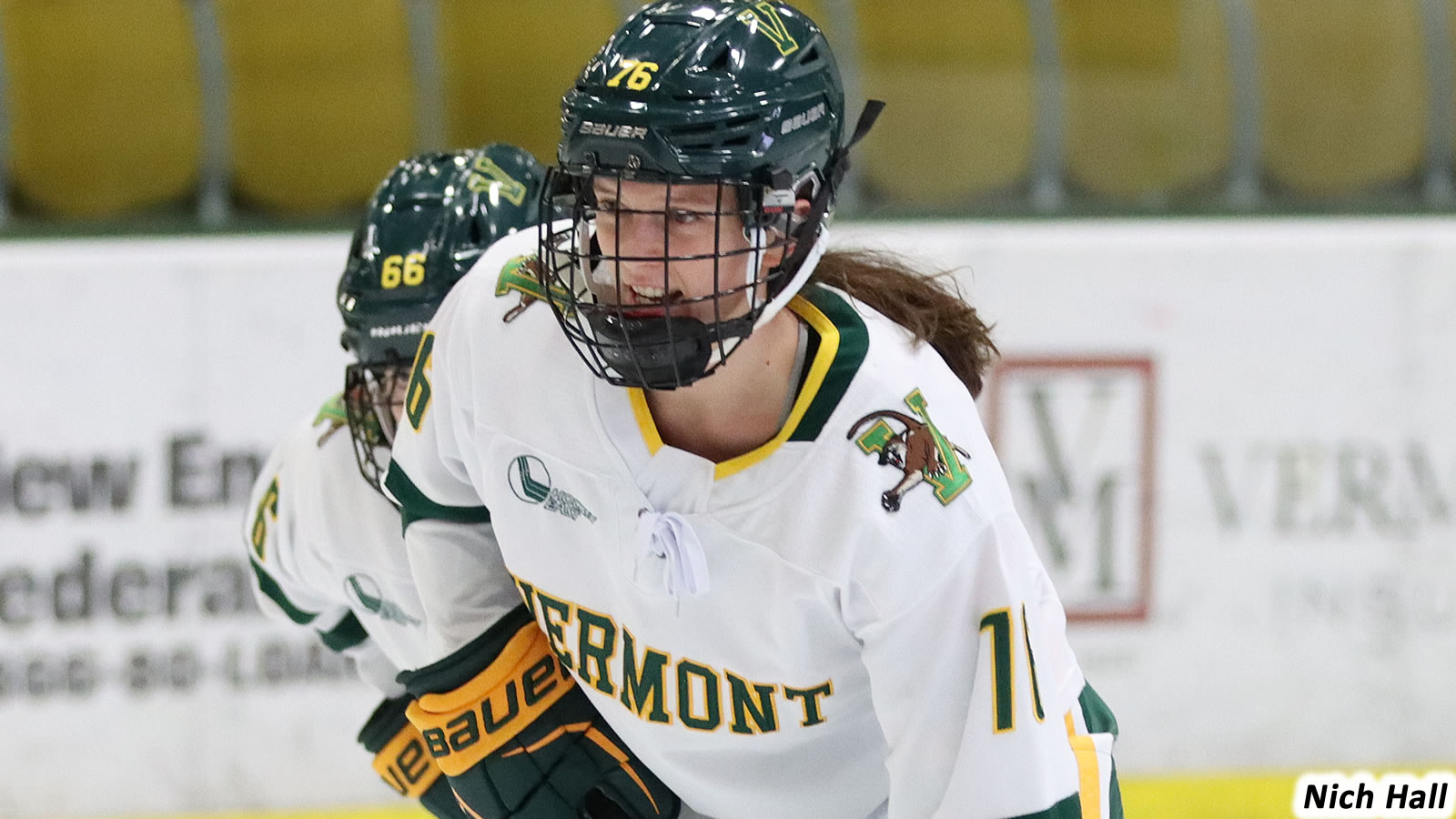 WORCESTER, Mass. - Maude Poulin-Labelle became the second Catamount in Division I history to record a natural hat trick in the first 16 minutes Tuesday afternoon and the offense didn't stop there. She set a program record with six points, including four goals, as UVM swept the season series with Holy Cross with a Division I record nine goals in a 9-0 win at the Hart Center Rink. With the win UVM improved to 10-6-1 in league play and the Crusaders fell to 1-15-0 in Hockey East.

"What a performance from a group that is maturing with every game," Head Coach Jim Plumer said. "Maude's game was one for the ages and it was great to see Jessie McPherson get the shutout. Our team is proving to be very adaptable to whatever the lineup looks like or whatever situation presents itself. I'm extremely proud of everyone associated with our program. It's a true team effort."

- Poulin-Labelle set the tone early for the Catamounts with her first goal 1:56 into the contest. On an extended solo rush, she cut into the slot with a crowd of Holy Cross defenders and snuck a shot through Madison Beck's legs.

- At the 8:38 mark of the first she struck again. This time it was a seeing-eye shot from the blue line. With heavy traffic in front of Beck the puck flew over her shoulder without her even seeing it. Evelyne Blais-Savoie and Alaina Tanski earned assists on the tally.

- With 4:15 to go in the first Poulin-Labelle completed the first UVM natural hat trick in Division I history with another shot from the point. Again, through traffic the shot went just under Beck's arm. It was her final action of the afternoon.

- With just one second left in the first period Theresa Schafzahl beat her replacement Jada Brenon with a quick wrist shot that went just under her arm for Schafzahl's team-leading 13th goal of the season.

- 3:10 into the second period the offensive onslaught continued. Ellice Murphy fed a perfect pass to Lily Humprhey on the door-step and she tapped home her fourth goal of the season.

- With 7:37 left in the middle frame Sara Levesque scored her second goal of the season to make it 6-0. Alyssa Holmes fed the puck to Poulin-Labelle alone in the slot and instead of shooting Poulin-Labelle setup Levesque for a one-timer from the side of the net that Brenon had no chance on.

- With 1:08 left in the second period Kristina Shanahan passed up to Poulin-Labelle for a breakaway opportunity. With poise, she calmly made several moves before sliding the puck in for her fourth goal of the game.

- In the third period Shanahan and Reagan Miller scored 2:48 apart on Holy Cross' Sarah Street to close out the historic afternoon for the Catamounts.

- Jessie McPherson made 25 saves Tuesday and earned her first shutout of the season. She also picked up her first career assist on Kristina Shanahan's third period tally.

- The nine-goal win was Vermont's largest in Hockey East history.

The Catamounts return home this weekend for a two-game Hockey East series with Providence College. The teams will faceoff at 6 p.m. on Friday and 3 p.m. on Saturday. Friday is Vermont's annual Pack the Gut Challenge presented by the Windjammer. Tickets are just $2 as we look to break the Hockey East attendance record once again!

Both games will air for free on CollegeSportsLive with Rob Ryan on the call. Friday night's action will also be broadcast live in-market as a part of "Hockey Night in Vermont" presented on WYCI. WYCI is available on the following channels Comcast - 712, Burlington Telecom - 284, Dish Network - 34, DirecTV 40, and Spectrum - 706/1230.