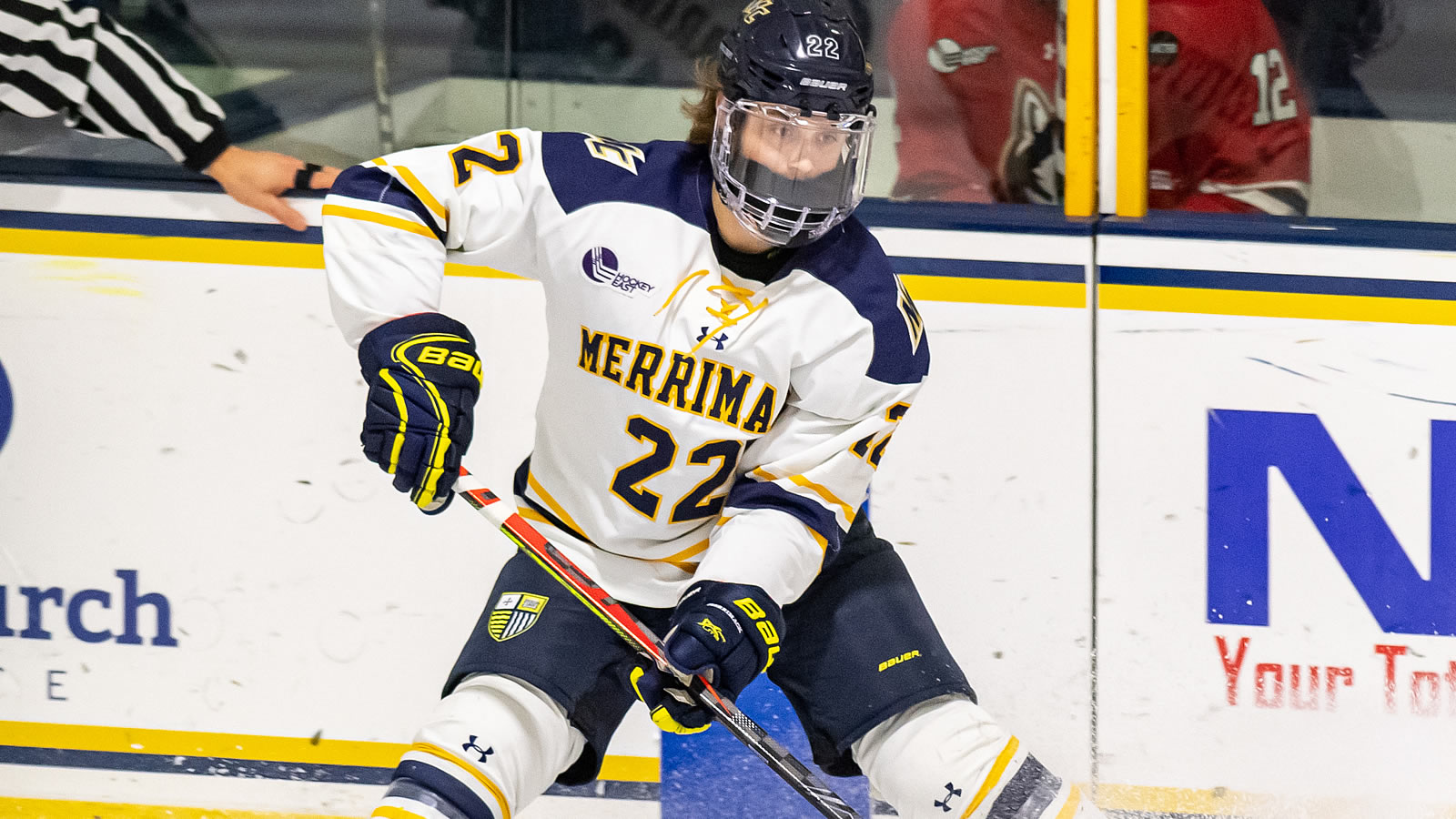 PROVIDENCE, R.I. - Logan Drevitch gave the Merrimack College men's hockey team a 2-0 lead midway through the first period, then it was all Zachary Borgiel the rest of the way, as he made 33 saves in the Warrior net to lift the visitors to a 2-1 win over #17 Providence Saturday night at Schneider Arena.

Merrimack took a lead it would not surrender just 2:49 into the game on Declan Carlile's second goal of the weekend, then Drevitch's marker came 10 minutes later. The Friars cut the deficit in half late in the first period, but then Borgiel and a tough defense shut it down from there.

The Warriors' skaters sacrificed all night to the tune of a season-high 27 blocked shots, including seven from Carlile.

Providence was able to find the back of the net with 4:19 to play in the game to tie the game, but a coach's challenge from Scott Borek reversed the call, as it was deemed through video review that the Friars originally entered the offensive zone offside.

- Offensive chances were tough to come by for the men from North Andover Friday night, but that story did not repeat itself in the rematch. Just under three minutes into the first, Ivan Zivlak absorbed a hit in the neutral zone to knock a puck free for Filip Karlsson-Tagtstrom. The sophomore then fed his Swedish countryman, Filip Forsmark, into the offensive zone. Forsmark sent a pass cross ice for Liam Walsh, who then sent one to the slot for Carlile, who one-timed home his second of the weekend.

- Merrimack's suddenly red hot power play was put to use just past the midway point in the first period and it kept on clicking. After a tie-up near the slot, Drevitch wound and fired on a slap shot from a few feet away that was stopped, but the rebound found Max Newton. The graduate student turned one towards the net that was stopped, but the rebound kicked out to the slot where Alex Jefferies won a battle to set it up for Drevitch, who fired a long bomb that eluded everyone and found the back of the net.

- Providence looked to crawl back into the game late in the period when it converted on a power play opportunity with just over three minutes to play.

- Past the late goal, Borgiel stood tall in the Warrior net with eight saves on the nine shots he saw in the opening frame.

- The second period was the Borgiel show, as the sophomore netminder came up big a few times between the pipes. He turned away all 12 shots he saw in the stanza to keep the Warriors on top into the second intermission.

- Merrimack continued to clamp down defensively in the third period heading into the coach's challenge. The Friars scored on a stuff-in next to Borgiel, but after review, the call was reversed after a Providence skater was just narrowly offside.

- The Warrior penalty kill went to work with just over two and a half minutes to play, then Providence pulled the goalie for a 6-on-4 advantage, but it wasn't enough and Merrimack secured the win and weekend sweep.

- Drevitch's goal, which turned out to be the game-winner, completed a memorable day for the senior, as he also played in his 100th career game.