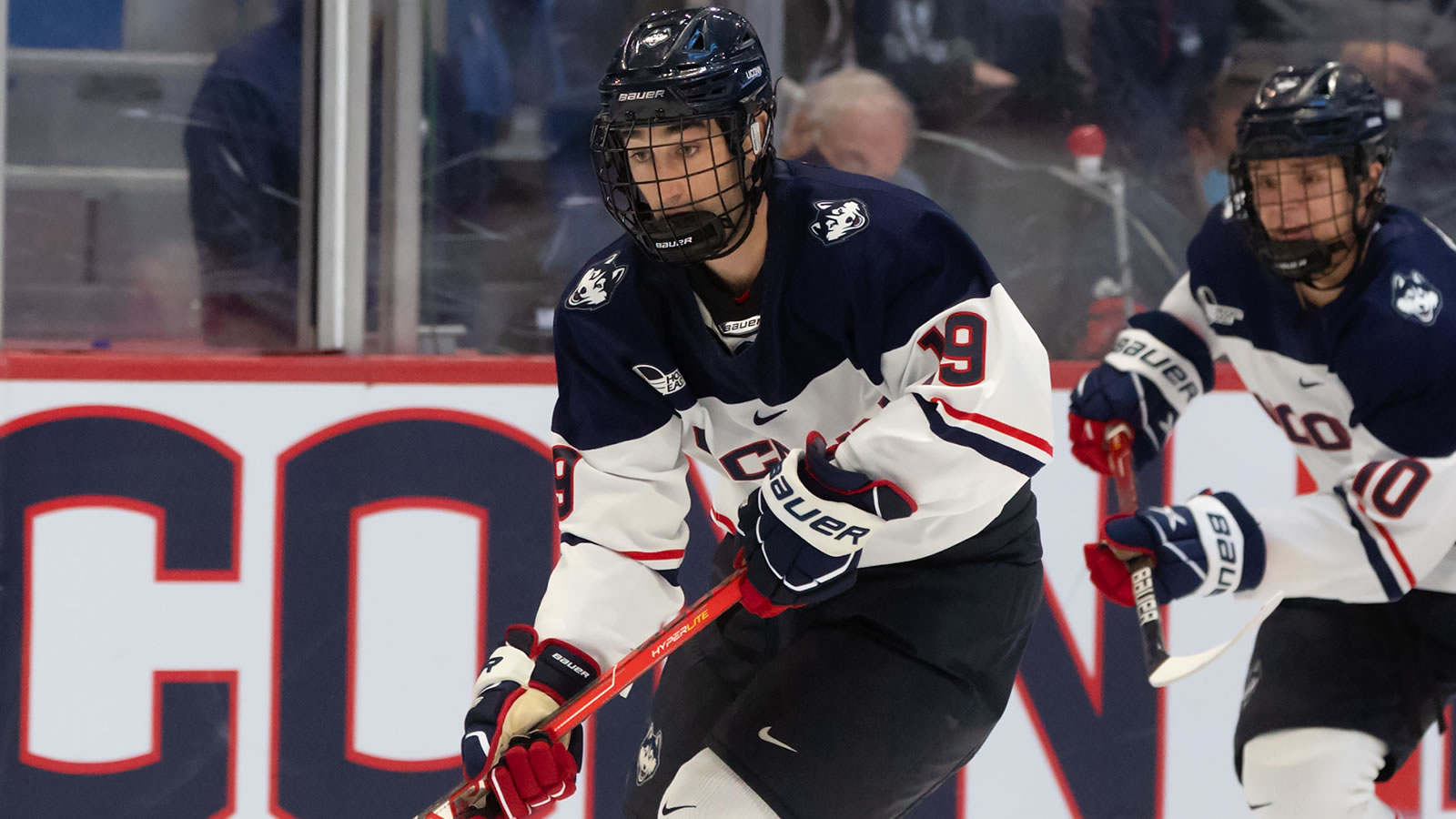 CHESTNUT HILL, Mass. - UConn grad student Kevin O'Neil (Latham, N.Y.) finished off a wild third period between the Huskies and the No. 18 Boston College Eagles, scoring the game-winner with 34 seconds left to send the Huskies home with a 5-4 Hockey East win at Kelley Rink.

The win moved the Huskies to 6-4-0 in Hockey East this season and was their first victory at BC's Kelley Rink in 10 games (1-7-2) since joining the league. UConn improves to 9-7-0 overall.

After falling behind BC 2-0 in the second period, the Huskies and Eagles went to the third tied up at 2-2. UConn struck early in the period as sophomore Artem Shlaine (Moscow, Russia) got his third on the season for a 3-2 lead just 1:03 in.

BC tied it at 3-3 on a Colby Ambrosio goal at 7:24 but a UConn power play with 5:34 to go gave the Huskies the lead back on senior Jachym Kondelik's (Budejovice, Czech Republic) fourth goal of the season. After just pulling the goaltender with a minute to play, BC's Patrick Giles created a break-away chance and knotted the game up again, 4-4, with 54 seconds to play, setting up O'Neil's late heroics.

The Huskies got a late rush as O'Neil broke up a BC rush in the neutral zone and burst up the right side. Looking shot all the way, he buried it past Dop to the far post delivering a 5-4 UConn win.

Five different Huskies found the back of the net in the win as sophomore Hudson Schandor (North Vancouver, British Columbia) and senior Carter Turnbull (Nanaimo, British Columbia) joined Shlaine, Kondelik and O'Neil in the scoring column.

The Eagles struck first, grabbing a 1-0 lead just 1:50 into the game. BC's Mike Posma picked-up the puck behind the net and fed Casey Carreau who sniped a shot from the right face-off dot to beat Hanson under the bar to the short side.

BC took a 2-0 lead at 4:31 of the second period on Marc McLaughlin's 14th goal on the year. Matt Argentina took a feed into the slot and tried a backhander on Hanson who made the initial stop. McLaughlin found room near the left post to sweep in the rebound for a two-goal Eagle lead.

The Huskies answered right back with their first of the night off the stick of Schandor at 5:08, his second goal of the season. Senior Jonny Evans (North Delta, British Columbia) carried into the BC zone and left the puck for an oncoming Schandor who fired past Dop from the left circle just before he could be knocked off the puck.

UConn knotted the game at 2-2 at the 10:50 mark on Turnbull's third of the year. Junior Vladislav Firstov (Yaroslavl, Russia) fed a cross-ice pass to Turnbull up ice who raced past the BC defender, beating him and Dop with a wrap-round attempt to the far-left post.

The Huskies opened the final period with their third-straight goal just 1:03 in. Just after a power play ended, UConn's Marc Gatcomb (Woburn, Mass.) held the puck in the zone and fed an oncoming Spetz who blasted a one-time rocket on net where Shaline was able to redirect in front of Dop for a 3-2 lead.

BC tied it back up at 3-3 as Ambrosio scored his sixth of the year at 7:24. Coming off a UConn turnover in the neutral zone, Patrick Giles fed Ambrosio up the left wing and he snapped a shot past Hanson from the left circle to knot the game back up.

UConn got a power play chance with 5:34 left in the period and found the back of the net for the go-ahead goal at 14:54. The puck cycled to Ryan Tverberg (Richmond Hill, Ontario) in the left circle and he fired on net with Kondelik camped in front for a deflection and a 4-3 lead on his fifth of the year.

The Eagles pulled Dop with just over a minute to play and with the puck sent up ice, Giles got loose for a clean break-away chance, beating Hanson to tie it up 4-4 with 54 seconds left. UConn would have one more answer for the Eagles as O'Neil was able to create a turnover in the neutral zone, skate up the right side and rip one to the far post past Dop for the game-winner with 34 seconds left.

The Huskies will head up to AIC on Tuesday, January 11 for a 7 pm match-up at the MassMutual Center.