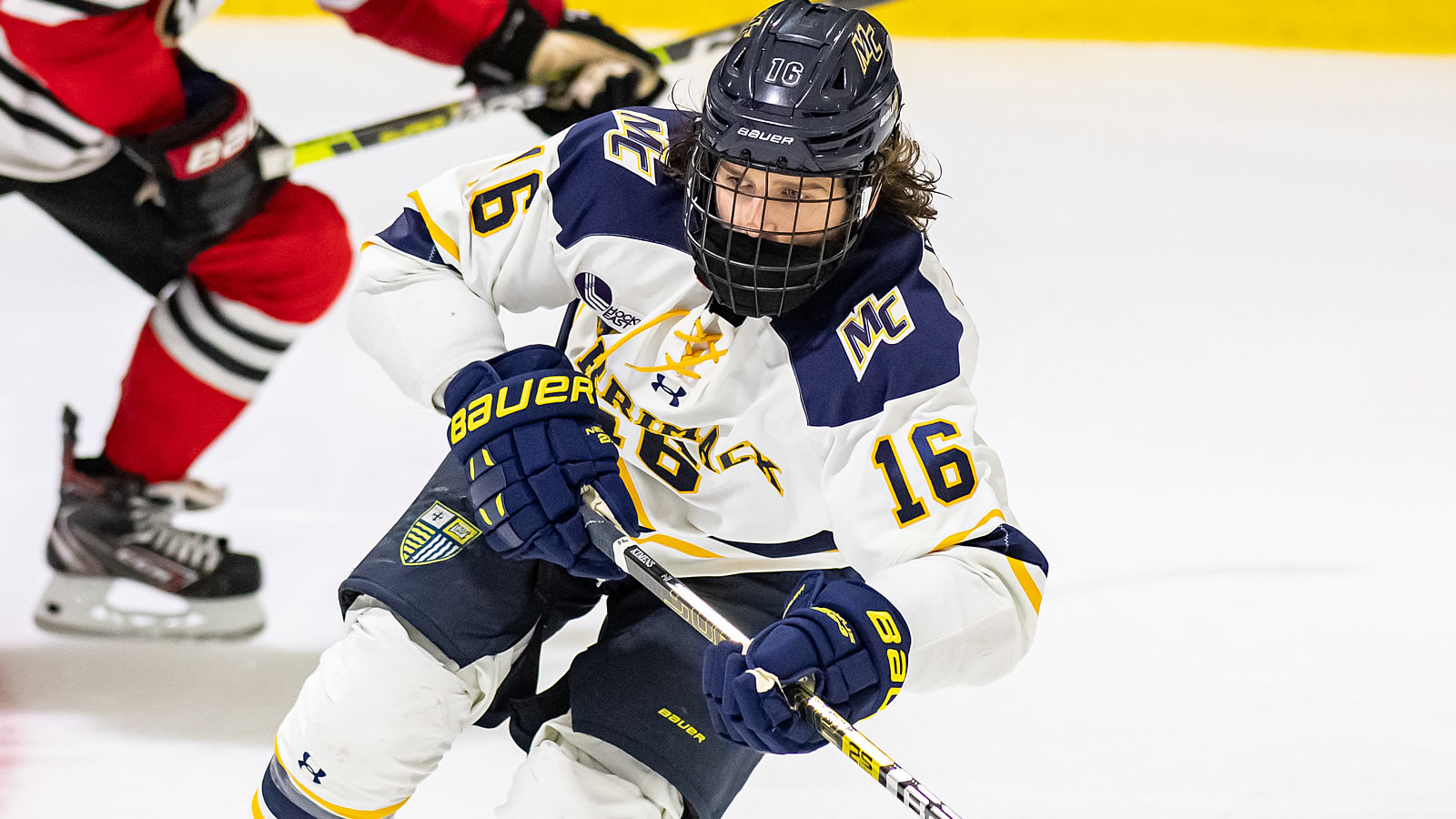 Regan Kimens and Hugo Esselin also lit the lamp in the first period to give Merrimack a 3-0 lead after 20 minutes. Ben Brar also scored in the third period to secure the win for the Warriors, as they outshot the Falcons by a 50-22 margin. It's the first time Merrimack has had 50 shots since a 3-2 overtime win against New Hampshire on Mar. 4, 2016.

Hugo Ollas got the start between the pipes for the Warriors and turned in another stellar effort. He stopped the first 21 shots he saw before the Falcons got on the board in the dying minutes. Merrimack was originally slated to play Clarkson and St. Lawrence on consecutive days, but COVID protocols altered the schedule and Bentley had an opening to create the Saturday night non-conference game.

- Merrimack came flying out of the gates and played one its best periods of the season. The Warriors had high quality chances in the opening minutes, but they did not convert until six and a half minutes in, then the floodgates opened. Bentley turned the puck over into the slot to Hillier, who quickly dished back to Kimens for a slam dunk finish.

- The onslaught pressed on two minutes later. On a rim around the boards in the defensive end, Ryan Nolan won a battle to work it to center. Esselin picked it up on a 2-on-1 with Ben Brar and opted to shoot, as he wired it home to the far side.

- Bentley had a power play opportunity that was killed off by Merrimack in the final three minutes, then the Warriors struck late. With under 30 seconds to play in the frame, Kimens sent a saucer pass through the neutral zone to Esselin on the far wing. Esselin crept in, then slid a pass to the slot for Hiller, who one-timed in his first career goal.

- When the horn sounded to end the first, Merrimack had a commanding 23-8 lead in shots on goal.

- The Falcon power play got a pair of chances in the second period, but Hugo Ollas and the Warrior penalty kill held them at bay. Merrimack started to find its legs again later on in the frame and ended with a 13-9 edge in shots on goal for the frame, but the score remained 3-0.

- Merrimack was finally awarded its first power play five and a half minutes into the third and they cashed in. Nolan held the zone at the right point, then rimmed the puck to behind the net for Max Newton. The graduate student found space, then centered a feed for Brar, who put it home to the far side to make it 4-0.

- Ollas came just a couple minutes away from a shutout, but Bentley scored on the power play with just 1:35 to go in the game to end the contest at 4-1.

- The two assists marked Nolan's first career multi-point game and he now has three points in his last three games.

- Newton, Merrimack's scoring leader with 20 points, now has at least a point in nine of his last 10 games.

- Newton was the Warriors' top faceoff man with nine wins on 15 opportunities.

- Hillier, Esselin, Kimens, Liam Dennison and Christian Felton all tied for the game-high with +2 ratings.

- Hillier and Alex Jefferies both tied for the game-high with six shots on goal apiece.

Merrimack is slated to host Providence Friday with a 7:00 pm puck drop from Lawler Rink.