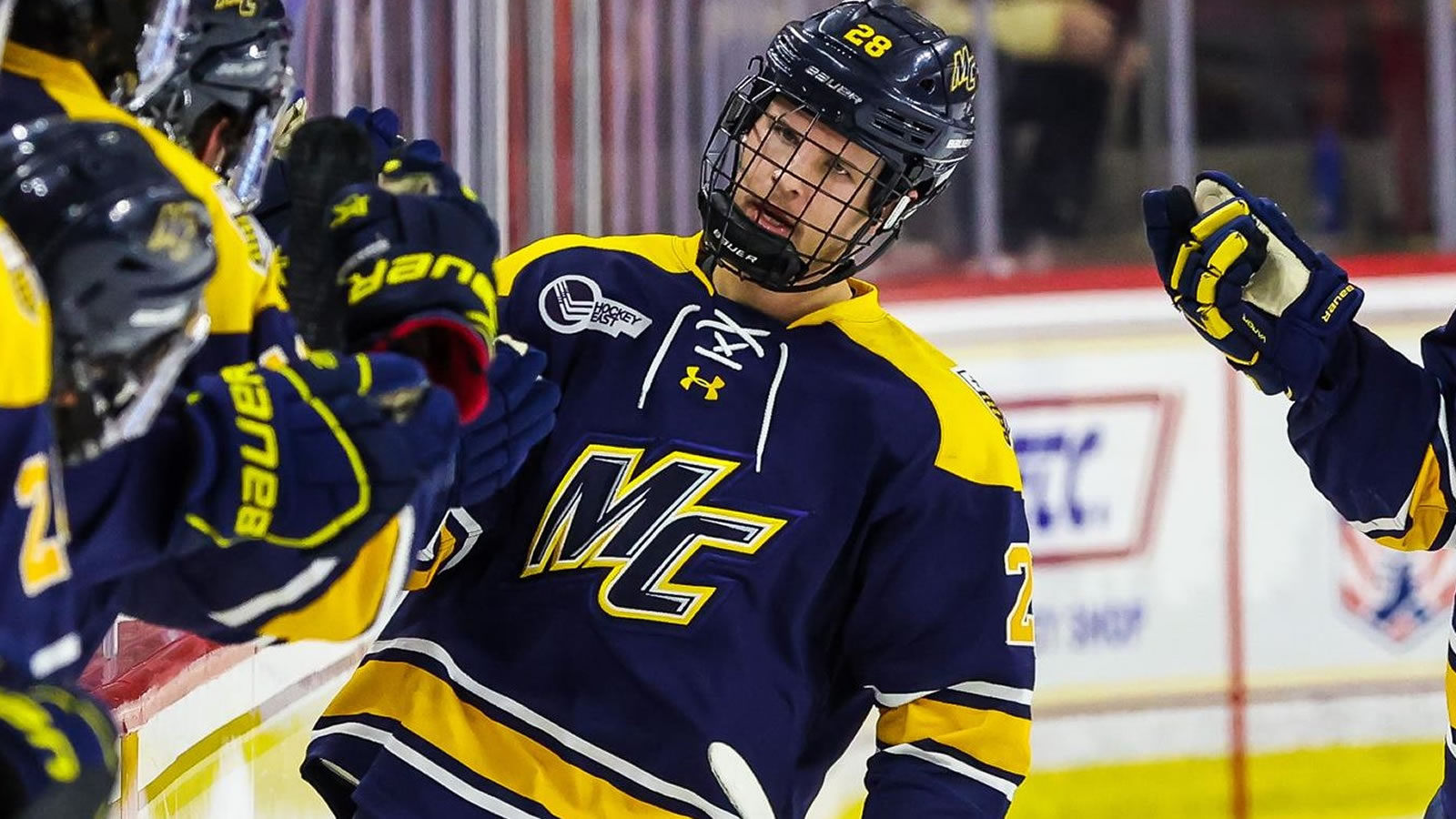 PROVIDENCE, R.I. - A massive offensive surge led by Filip Forsmark and Max Newton helped the Merrimack College men's hockey team past Brown, 7-1, Sunday afternoon at Meehan Auditorium. Forsmark tallied two goals and two assists for four points and Newton scored twice. Matt Copponi had a career highlight, as he tallied his first collegiate goal in the third period to cap the scoring. Nolan also lit the lamp in the third period for his first marker of the season and Jordan Seyfert got the scoring started for the visitors early on in the first.

Zach Uens compiled an historic effort on the back end. He was on the ice for all seven of Merrimack's goals, which were all even strength, which was good for a +7 on-ice rating. While plus/minus is not as longstanding of a statistic in the world of hockey, it is believed to be best single game rating in Division I program history. Nationally, Shayne Gostisbehere of Union also compiled a +7 rating in the Dutchmen's 7-4 victory over Minnesota in the 2014 national championship game.

In goal, Hugo Ollas answered the call and made 22 saves to secure his third win of the season.

- After half a month away from game action, the visitors from North Andover struck quickly to take the lead. With the Warriors in the attacking end, Uens bodied a player into the boards to create space for Mick Messner at the left point. Messner wristed it towards goal and Seyfert got a stick to it and deflected it home just 2:27 into the game.

- Brown had a few chances to even the score, but Hugo Ollas was strong in the Merrimack goal and turned aside all eight shots that challenged him in the period.

- On the other end, the Warriors were able to stretch the lead on a persistent play. Declan Carlile chipped a puck into the neutral zone for Newton, who came into the offensive zone and slipped a pass to Forsmark. The junior's shot was stopped, but the rebound slipped behind the goalie, where Newton crashed in and swiped it home for his team-leading eighth of the season.

- The Bears appeared to have cut the deficit in half in the final minute of the period on a power play goal, but the Merrimack coaching staff challenged that Brown had too many men on the ice throughout the course of the play. The goal was disallowed and Brown was penalized for it.

- Merrimack enjoyed an abbreviated power play to open the second period and cashed in. Carlile fed a pass to Liam Walsh along the goal line, who backhanded a pass through the slot. While it wasn't originally controlled, Forsmark swooped through and won a battle to shoot it home just a few moments after the teams returned to full strength.

- The teams skated continuously for a long stretch in the middle of the period and traded chances before Merrimack put a stop to it. Alex Jefferies played a puck forward in the neutral zone to Steven Jandric, who flew in on the right wing. He flung a backhanded saucer pass to the doorstep for Newton, who one-timed home his second of the day.

- After the teams headed to the dressing rooms after the second period with a 4-1 score, Jandric quickly picked up another primary assist to begin the third. He intercepted a pass and hit Forsmark in the neutral zone with a feed that sent the junior in all alone. Forsmark got it behind the line for his second of the night.

- Just two and a half minutes later, Merrimack capitalized on a regroup in the neutral zone when Zach Vinnell and Ben Brar combined to set up a streaking Nolan. He came into the high slot and uncorked a wrist shot that fit just under the bar for his first on the campaign.

- Copponi ended the scoring on the day in a big way. After Forsmark cycled a puck for Filip Karlsson-Tagtstrom in the attacking zone, the fellow Swede threw it towards goal for Copponi, who collected it, wrapped it around the far side and into the back of the net.

- Forsmark, Carlile, Newton and Jandric were all credited with multi-point games. The four points mark a new single game career-high for Forsmark.

- Logan Drevitch led the team with four shots on goal.

- Seyfert now has a point in three straight games.

- Messner now has at least a point in five of his last six games.

- Newton won 13-of-19 faceoff attempts to lead the Warriors.

- Elsewhere in the plus/minus department, Forsmark was +4 and Carlile was +3. Carlile now holds the team lead alone at +12. Karlsson-Tagtstrom is not far behind at +11.

Merrimack returns to the ice Monday night for a recently scheduled non-conference matchup with Massachusetts in Amherst, Mass. Puck drop is set for 6:00 pm from Mullins Center.