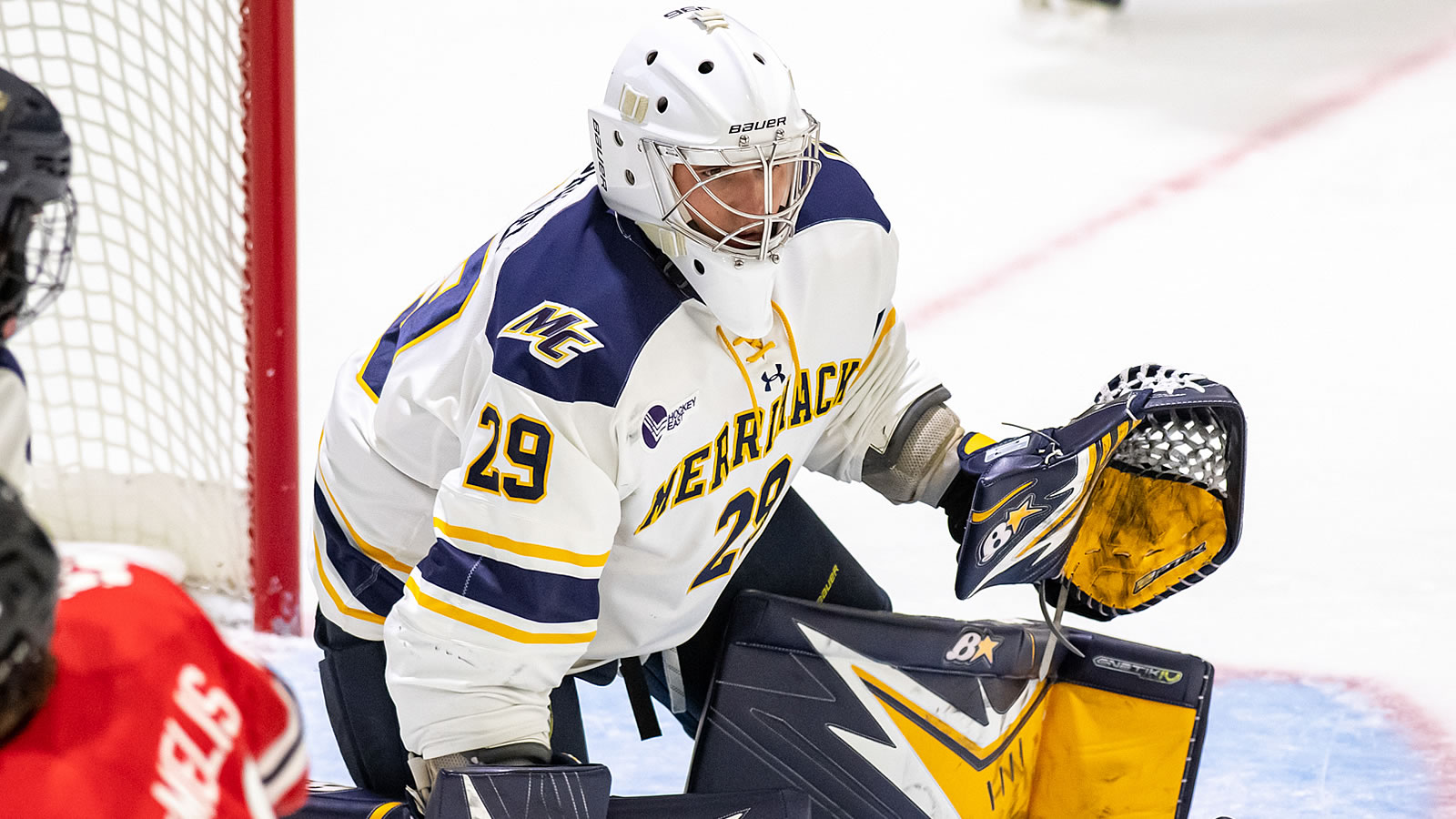 NORTH ANDOVER, Mass. - Mick Messner scored his first goal as a Warrior with 3:34 to play in the third period to tie the game late and help the Merrimack College men's hockey team secure a 2-2 tie Friday night at Lawler Rink against Dartmouth.

Messner's game-tying goal came just over a minute after the Big Green took its first lead of the game in the closing five minutes of the final frame. The Warriors heavily outshot the visitors with a 38-22 final tally, but strong goaltending helped Dartmouth escape with the stalemate.

Mac Welsher broke the ice in the game for Merrimack just 4:25 into the first, but that lead was also short lived thanks to an equalizing goal two minutes afterwards.

- The Warriors took advantage of play in the opening five minutes and missed on a few chances, but were then rewarded. Alex Jefferies had a good chance off the rush that missed, but Matt Copponi battled to grab the rebound back and bump it loose for Jefferies along the goal line. He then slid a pass in front for Welsher, who deposited home his third of the season.

- Dartmouth was able to turn the tides and score an unassisted goal two minutes later to knot the score at one. The score remained the same after 20 minutes and the teams tied in shots at 9-9.

- Merrimack took momentum of the game again in the second period and outshot the visitors from New Hampshire by a 15-7 margin, but could not take the lead. The Warriors' best chance from in the period happened in the closing 30 seconds, as the hosts had a trio of in-tight chances that were stopped.

- The Warrior penalty killing unit was pushed into duty just a couple minutes into the third when Liam Walsh was given a five-minute major for cross checking and a game misconduct. Merrimack held strong and did not allow a single shot to stave off the Dartmouth chance.

- The rubber kept on flying towards Dartmouth goalie Clay Stevenson in the period, as the Warriors outshot the guests 12-5, but it was the Big Green that pulled through first to take a 2-1 lead with 4:42 to play in the third.

- It did not take long for Merrimack to respond. After some sustained zone pressure, Jordan Seyfert threw a puck out to the point for Zach Vinnell. The defenseman slalomed his way towards the goal, then backhanded the puck forward. Messner was there to receive it and had his original shot stopped, but snuck the rebound home on the far side.

- Both teams had one shot on goal in the overtime session and Jefferies had a great opportunity to win it in the dying moments that just missed. The teams did not partake in a shootout after overtime because it would not have affected the Hockey East or ECAC standings.

- Max Newton continued his season of dominance at the faceoff dot, as he won 18 of 22 opportunities.

- Walsh, Jefferies, Steven Jandric and Jake Durflinger all tied for the team-high in shots with four apiece.

- Zachary Borgiel made his second straight start between the pipes and kicked out 20 of the 22 shots he faced.

The Warriors conclude the calendar year with the game, but are back in action on New Year's Day 2022 when they continue a three-game stretch against Ivy League opponents against Yale. Puck drop is slated for 4:00 pm from Ingalls Rink in New Haven, Conn.