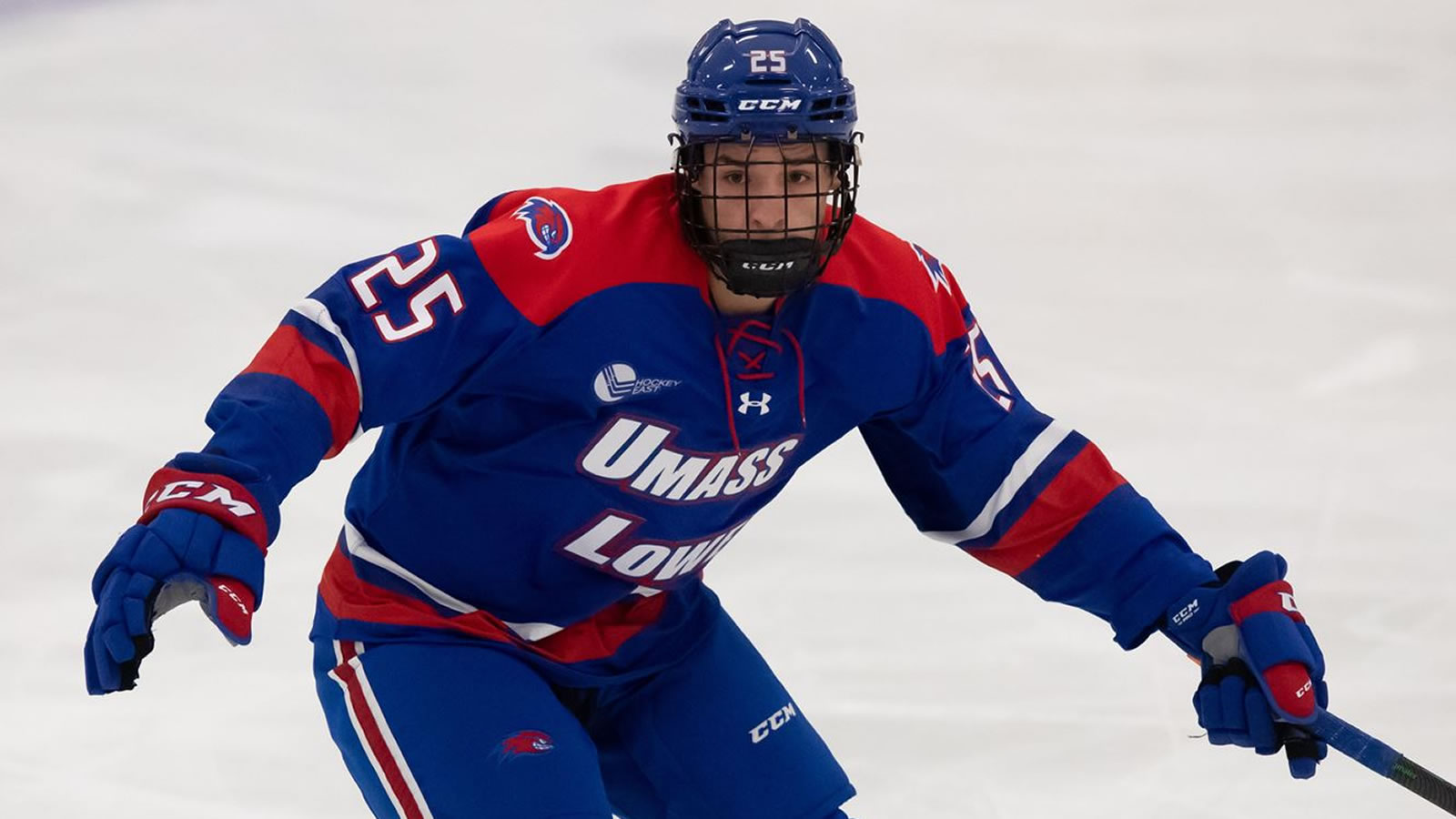 BURLINGTON, Vt.-Led by two goals from freshman Matt Crasa (South Setauket, N.Y.), the No. 15 UMass Lowell men's hockey team (10-3-3, 8-2-1 Hockey East) pulled off a 2-1 come-from-behind win over Vermont (3-11-2, 2-6-2 HEA) to complete the series sweep at Gutterson Fieldhouse Saturday night. With the pair of wins, the River Hawks move into sole possession of first place in the conference standings heading into the holiday break.

With his two goals, Crasa finished the weekend with a team-best four points after dishing out a pair of assists in Friday's 3-0 shutout. Joining Crasa on the scoresheet tonight, senior Reid Stefanson (Winnipeg, Manitoba), junior Marek Korencik (Zilina, Slovakia) and freshman Owen Cole (Dunnville, Ontario) dished out an assist apiece to help lift the River Hawks to victory.

Earning the start for the second tilt of the series, senior Owen Savory (Cambridge, Ontario) finished with 34 saves to tie his career-high set last season against UConn.

"We needed everyone tonight in facing a very hungry UVM team. I feel several guys provided key leadership plays to come back against a well-coached team. Goaltending was strong, and we needed some timely scoring to take the lead into the third," commented Head Coach Norm Bazin. "The last period provided scoring chances on both sides with the goaltenders trading saves. Fortunately, our guys were able to dig deep to come away victorious. The guys will now turn their focus towards exams and the break."

Drawing first blood, Vermont made its way onto the board just 5:36 into the game. Finding the feed from Philip Lagunov, Jacques Bouquot sent in a long-range shot that caught Savory off guard to give the home squad the 1-0 advantage.

Fighting to overcome an aggressive Catamount attack, the River Hawks gained their footing late in the first frame to return the pressure. Getting a faceoff in the offensive zone, Stefanson won possession off the jump to send it back towards Crasa. The freshman quickly steadied the puck before firing it into the net to equalize the score moving into the first break.

After early penalty trouble kept the teams in and out of the box through the start of the second period, smart defense by Korencik gave the River Hawks the offensive spark to retake the lead. Stopping the puck in front of the net, the junior defenseman launched the puck down the ice to Cole, who charged towards Catamount netminder Tyler Harmon. Flicking the puck towards the left pad, Vermont's Joe Leahy sent the rebounded puck back into the slot, where Crasa was quick to the chase. The South Setauket product then hit a one-timer up and over Harmon's blocker to net the eventual game-winner.

Despite a scoreless third period, Vermont remained unrelenting in the hunt for a game-tying tally. Solid backstopping by Savory alongside another impressive showing on the penalty kill aptly squelched the Catamount comeback efforts and secured another three points in the conference standings for UMass Lowell.

After a two-week holiday hiatus, the River Hawks close out the first half of the schedule on Dec. 29, when they travel to Canton, N.Y., to take on St. Lawrence.