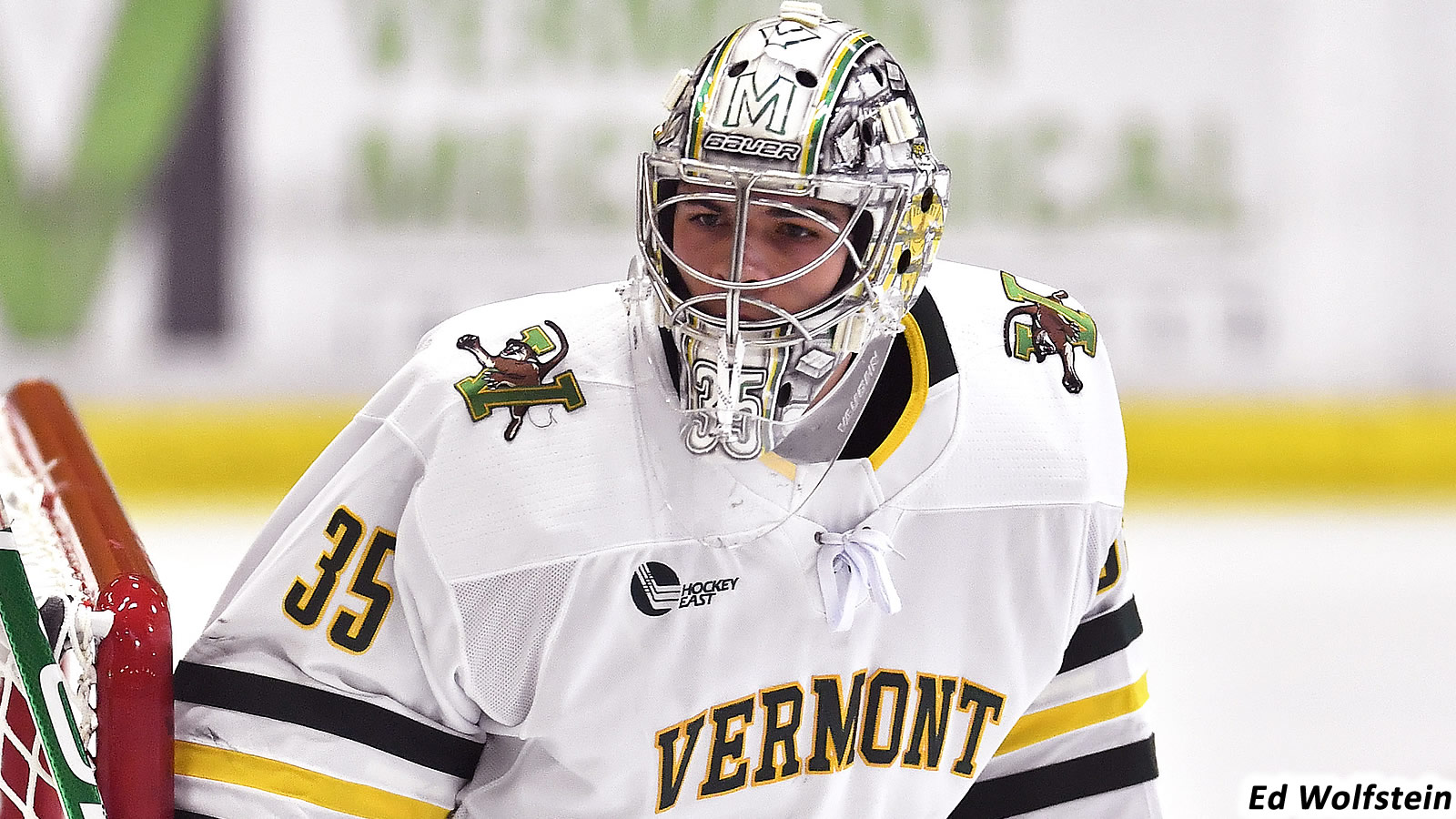 ORONO, Maine - Sophomore goaltender Gabe Carriere made a career-high 50 saves leading UVM in a 1-1 tie with Maine at Alfond Arena Saturday night. Philip Lagunov scored the only goal of the shootout for Vermont and Carriere made three additional saves to secure the additional league point.

"The story of the weekend was Gabe Carriere, who was excellent in both games and special tonight," Head Coach Todd Woodcroft said. "Sometimes you play and sometimes you perform - these past two games, Gabe's performance was extraordinary. Secondly, even though we were unable to create sustained offensive zone time, our bench was calm and responded when the waters were rough. Our late PK was excellent and while we don't want to be killing a major penalty late in the game, the players stepped up with a great kill. We will take the points and bank the experience."

- The Catamounts opened the scoring 9:17 into the first period with some excellent breakout work. Carter Long pushed the puck with a stretch pass to Isak Walther at center ice and Walther quickly passed it onto Dovar Tinling and he and Joel Määttä broke in on Maine's Matthew Thiessen on a two-on-one. Tinling looked pass and then ripped a shot past Thiessen for his first goal of the season.

- After sustained pressure in the second period the Black Bears equalized with 3:39 left. Maine's Donavan Villeneuve-Houle intercepted a pass attempt from Carriere and stashed the puck into the empty net for his fifth goal of the season.

- With 4:27 left in the third period the first year defenseman Luca Münzenberger received a five-minute major for contact to the head after a Maine forward lowered his body as he hit him in the neutral zone. On the ensuing penalty, the Catamounts sold out to earn an opportunity to collect league points. Four Catamounts blocked shots and Carriere made three saves as UVM kept the game going with a big penalty kill.

- After a scoreless overtime session Vermont headed to a shootout for the second time this season. In the shootout Carriere stopped all three shooters he faced and Lagunov scored on UVM's second attempt to secure the shootout victory.

- In Vermont's last three games Carriere has stopped 98 of the 101 shots he's faced a .970 save percentage. UVM is 3-2-2 this season in games Carriere starts.

- UVM was three-for-three on the penalty kill tonight, UVM hasn't allowed a goal in its last 13 times shorthanded over a four-game stretch.

The Catamounts return to Gutterson Fieldhouse next weekend for their final home contests of 2021 as they host No. 15 UMass Lowell in a two-game series. UVM will face the River Hawks at 7 p.m. on Friday and Saturday. Friday night is the annual Teddy Bear Toss presented by TD Bank. Teddy Bear donations will benefit the Boys & Girls Club of Burlington, Maple Ridge Assisted Living and Memory Care and the Lund Family Center. During the game on Saturday we will be collecting diapers for the 2021 Dee PT Great Diaper Dump in support of VT Kids. Please consider donating diapers to help local families. The voice of the Catamounts, Adam LaFleur, will broadcast the action live on WVMT (FM 96.3 / AM 620) and free live streaming will be available at CollegeSportsLive both nights.