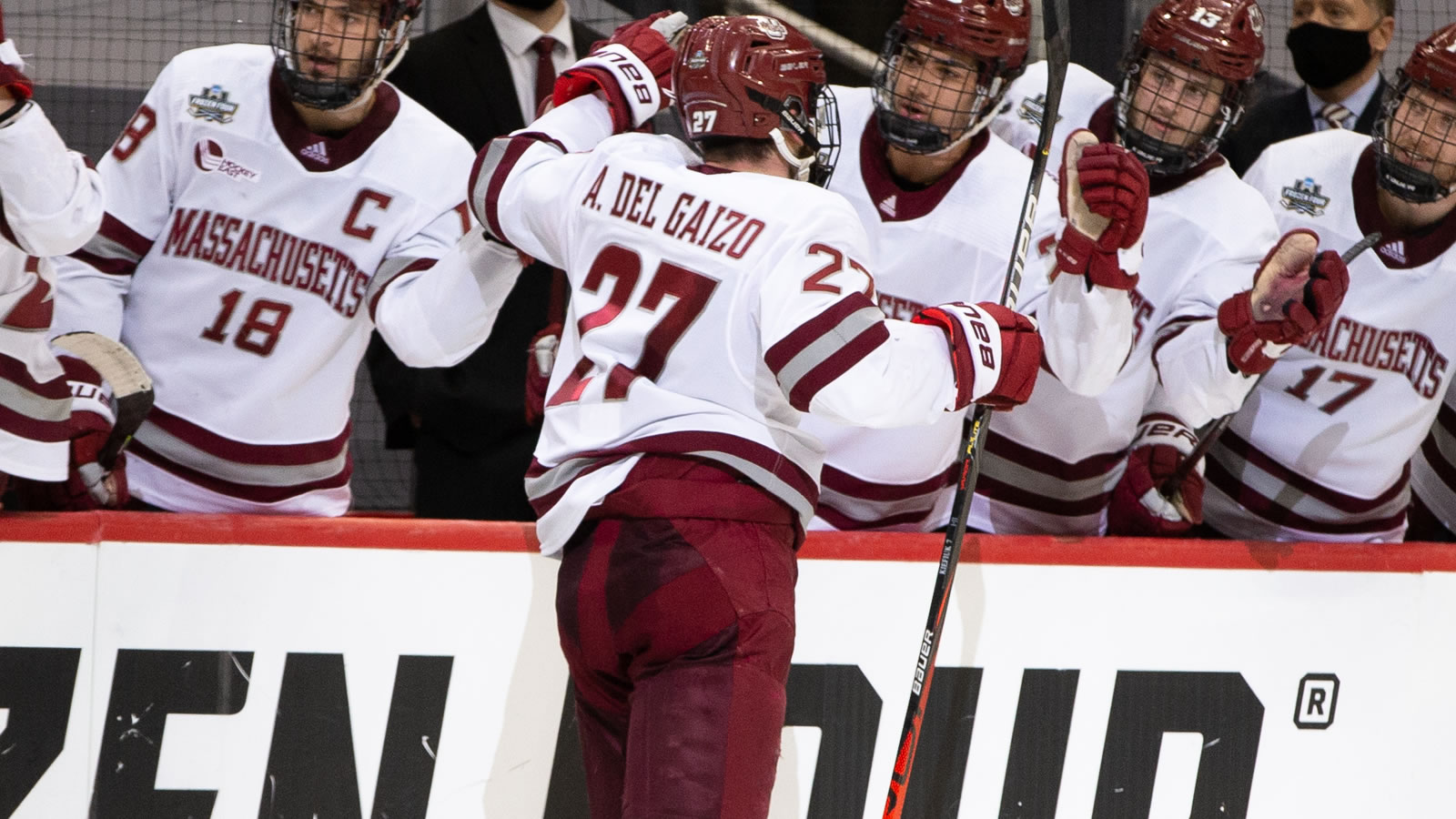 AMHERST, Mass. - Aided by a second straight multi-point game for senior Anthony Del Gaizo, No. 14 University of Massachusetts hockey topped No. 15 UMass Lowell, 3-2 on Saturday at the Mullins Center. With the win, the Minutemen improve to 8-4-2 on the season, 6-2-2 in Hockey East, while the River Hawks fall to 8-3-3 and 6-2-1 in conference action.

"I thought it was a really good hockey game," said UMass head coach Greg Carvel. "I thought both teams, at times, were very dominant in the offensive zone. It was a tight game; special teams were a big factor. I'm a little frustrated with the types of penalties we're taking right now but I couldn't be prouder of the fact that we've been playing shorthanded for a long time here and we continue to find ways to scratch and claw. We don't win every game but we're in every game. Tonight I dropped down to three lines halfway through the game and the kids that played all those minutes really sucked it up. Tonight was a real character win for us. UMass Lowell is a really good team and Matt Murray made a ton of huge saves."

UMass opened the scoring just 2:01 into the contest, making quick work of the first power play opportunity of the night. Junior Reed Lebster was positioned at the top of the crease to redirect in a feed from Del Gaizo and freshman Ryan Ufko to put the Minutemen out in front, 1-0.

The lead doubled to 2-0 at the 3:30 mark of the second period when freshman Scott Morrow picked up the puck from classmate Lucas Mercuri and danced around the zone before slicing through the UMass Lowell defense for the highlight reel tally.

The River Hawks cut the UMass lead in half with a power-play goal 14:42 into the second period as Ryan Brushett beat goaltender Matt Murray though a screen with Reid Stefanson and Carl Berglund earning assists.

Del Gaizo gave the Minutemen back some breathing room with his third goal of the weekend just 23 seconds into the third period, cleaning up a rebound at the net front from senior Colin Felix and Lebster.

UMass Lowell converted with the man advantage for a second time at the 13:23 mark with Berglund and Nick Austin setting up Andre Lee for the score.

The UMass defense held strong the rest of the way though to preserve the win, despite being outshot 15-3 in the third and 32-17 on the night. Murray finished with 30 saves for the Minutemen and Henry Welsch totaled 14 stops for the River Hawks.

UMass Lowell was 2-for-4 on the power play in the contest and UMass went 1-for-3.