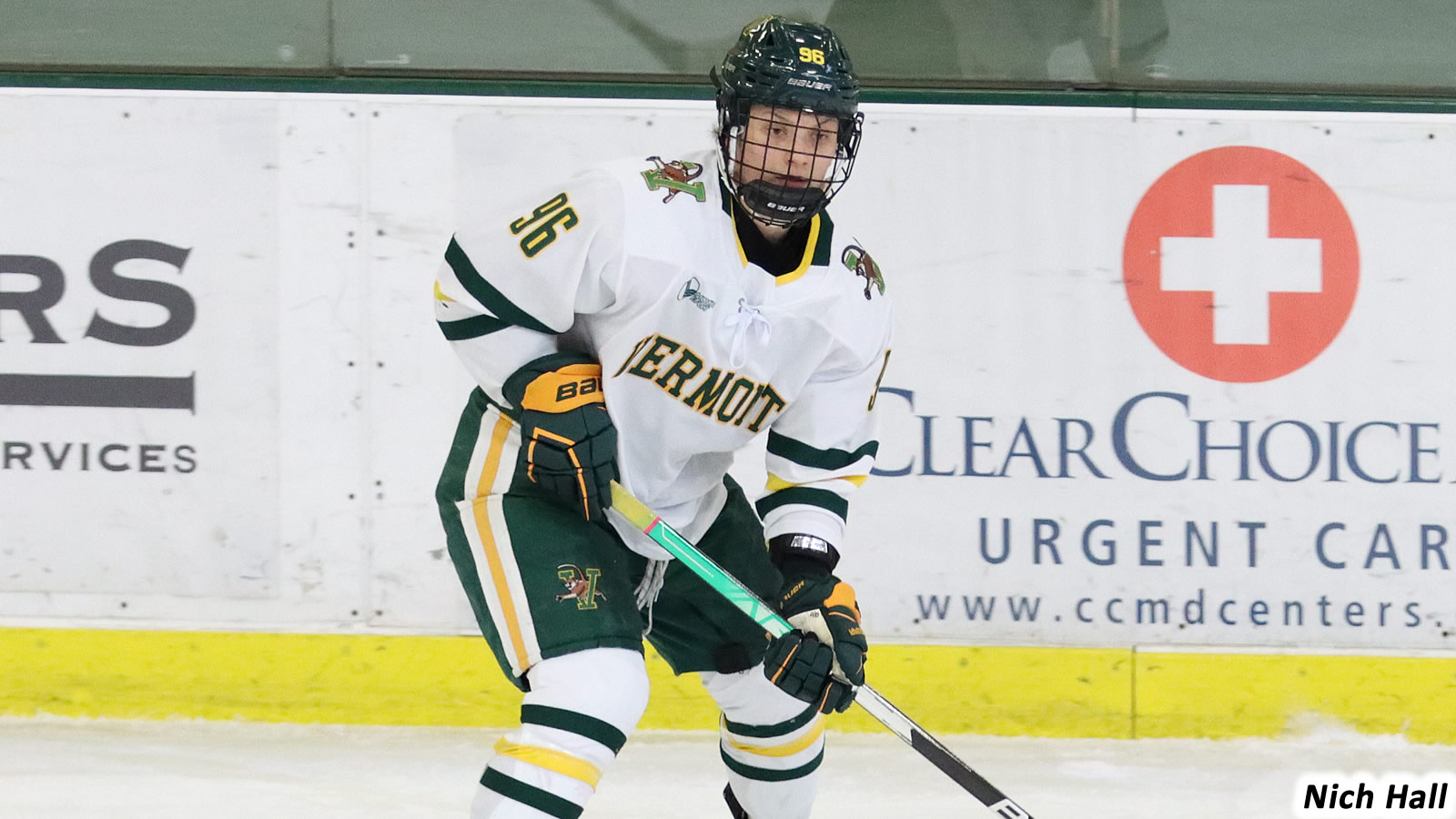 "It's great to get the win obviously and to score five goals," Head Coach Jim Plumer said. "We've got to find a way to close out games more consistently though. It was great to have our international players back and they made a huge impact on the game. I'm expecting another tough game tomorrow and we are going to have to play more consistently.

- Merrimack opened the scoring midway through the first period. A Kiki Roust point shot was blocked by a Vermont defender in front but the rebound fell to Courtney Maud who snapped one home in the slot for her third goal of the season.

- Alyssa Holmes answered back for the Catamounts 44 seconds into the second period. On a three-on-three rush Maude Poulin-Labelle drove to towards the net before feeding a pass back to Holmes who was a trailer on the play. She one-timed the feed over the goaltender's shoulder for her first goal of the season.

- UVM took the lead with a power play tally 8:39 into the middle frame. Corrine McCool knocked down a Sini Karjalainen point shot in front of the net. She quickly passed it over to Theresa Schafzahl who one-timed it home in the slot for her second of the campaign.

- The Catamounts scored two more goals in the middle frame 51 seconds apart to take a three-goal lead. With five minutes left in the second Evelyne Blais-Savoie scored her first career goal for Vermont. She gathered the rebound on a Poulin-Labelle shot and roofed it.

- With 4:09 left in the second McCool scored on the power play for her second of the season. Lily Humphrey fed a pass to Karjalainen at the point that she one-timed on goal. Merrimack's Emma Gorski couldn't control the rebound and McCool tapped it home from just inside the crease.

- With 2:13 left in the second Teghan Inglis drew Merrimack within two goals with her sixth of the season. On a one-on-three rush Inglis got a step on a UVM defender and roofed a backhand past Jessie McPherson.

- Merrimack scored twice in the final six minutes of regulation to force overtime Saturday. Ally Qualley scored with 5:49 left and Inglis found the back of the net again with 1:58 remaining.

- During the three-on-three Schafzahl retreated to the neutral zone before stopping on a dime and losing a Merrimack player going the other way. With Schafzahl's quick move UVM reentered the Merrimack zone on a three-on-one. Schafzahl passed over to Mlýnková setting her up alone with Gorski. She fired a wrist shot stick side for the winner.

- For the second time this season Natálie Mlýnková scored the game-winning goal against the Warriors.

- Bella Parento blocked a game-high five shots for the Catamounts.

- Sini Karjalainen led all skaters with three points, all assists in the second period.

- Vermont outshot Merrimack 16-2 in the second period as they scored four goals.

The Catamounts and Warriors are back at it tomorrow afternoon at 3 p.m. in their final regular season matchup. The game will air live for free on CollegeSportsLive.