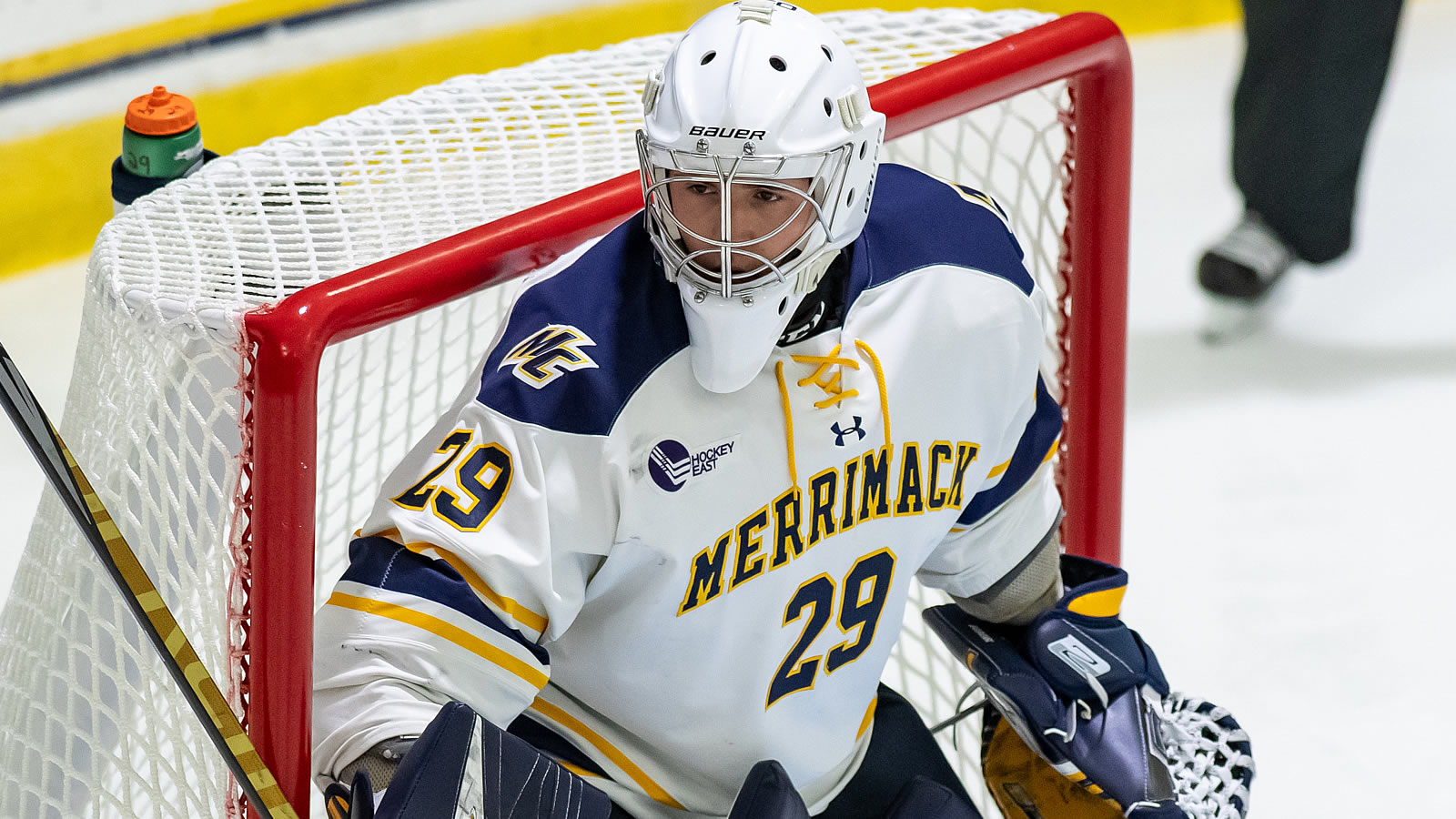 ORONO, Maine - Zachary Borgiel was perfect on all 18 shots that he saw Saturday night at Alfond Arena to lead the Merrimack College men's hockey team to a 2-0 win over Maine.

Ben Brar staked Merrimack to the lead midway through the first period and the Warriors never relinquished it to give Brar the game-winner and the Warriors four out of a possible six points in the Hockey East standings on the weekend up north. Christian Felton added an insurance marker for his first collegiate tally late in the second period to give Borgiel more of a cushion.

- Maine had a couple chances miss in the early going thanks to some strong stops from Borgiel, which opened the door for opportunities on the other side of the ice.

- While the teams skated 4-on-4, Steven Jandric forced a turnover at the attacking blue line and quickly dished to Max Newton in the near faceoff circle. While the defense reset, Newton slid a pass over to Brar at the opposite faceoff circle for a one-timed blast that just snuck under the bar.

- Merrimack built on the tally and closed the opening frame with an 11-5 edge in shots on goal.

- A defensive stalemate consumed a good chunk of the second period, but Merrimack controlled the puck for long stretches in the offensive zone. The chances started to build for the visitors in the latter stages of the stanza and it led to a milestone goal.

- With under five minutes to play before the second intermission, Liam Dennison joined the rush and had a shot stopped. The rebound went to the corner, where Merrimack dug it out for Filip Forsmark. The junior left it behind him for Liam Walsh, who swung around the net and fed Felton for a one-timer that caught the post and went in for the transfer defenseman's first collegiate goal.

- The score remained 2-0 when the second period horn sounded and Merrimack had a 19-10 lead in shots for the game and 7-5 edge for the frame.

- For the third straight period of the evening, Merrimack had the edge in shots on goal to close out the game. Borgiel got tested a few times, but came up with the timely saves each time, as he kicked out all eight he saw to finish the contest.

- The Warriors had a few chances at the empty net after Maine pulled its goalie with over three minutes to play, but settled for the 2-0 decision.

- Zach Uens and Walsh both had a pair of blocked shots to lead the team in the category.

- Walsh and Jake Durflinger tied for the team-high in shots with four.

- Newton and Walsh both finished .500 or better on faceoffs.

- The shutout was Merrimack's first since Troy Kobryn did it Feb. 21, 2020 at Providence. It's the first time the Warriors have ever accomplished the feat at Alfond Arena in the 40+ year history of the teams playing each other.

- Newton completed his weekend with three points on two goals and a helper.

Merrimack is off until Nov. 23 for a pre-Thanksgiving showdown with Holy Cross in Worcester, Mass. Puck drop is slated for 7:00 pm.