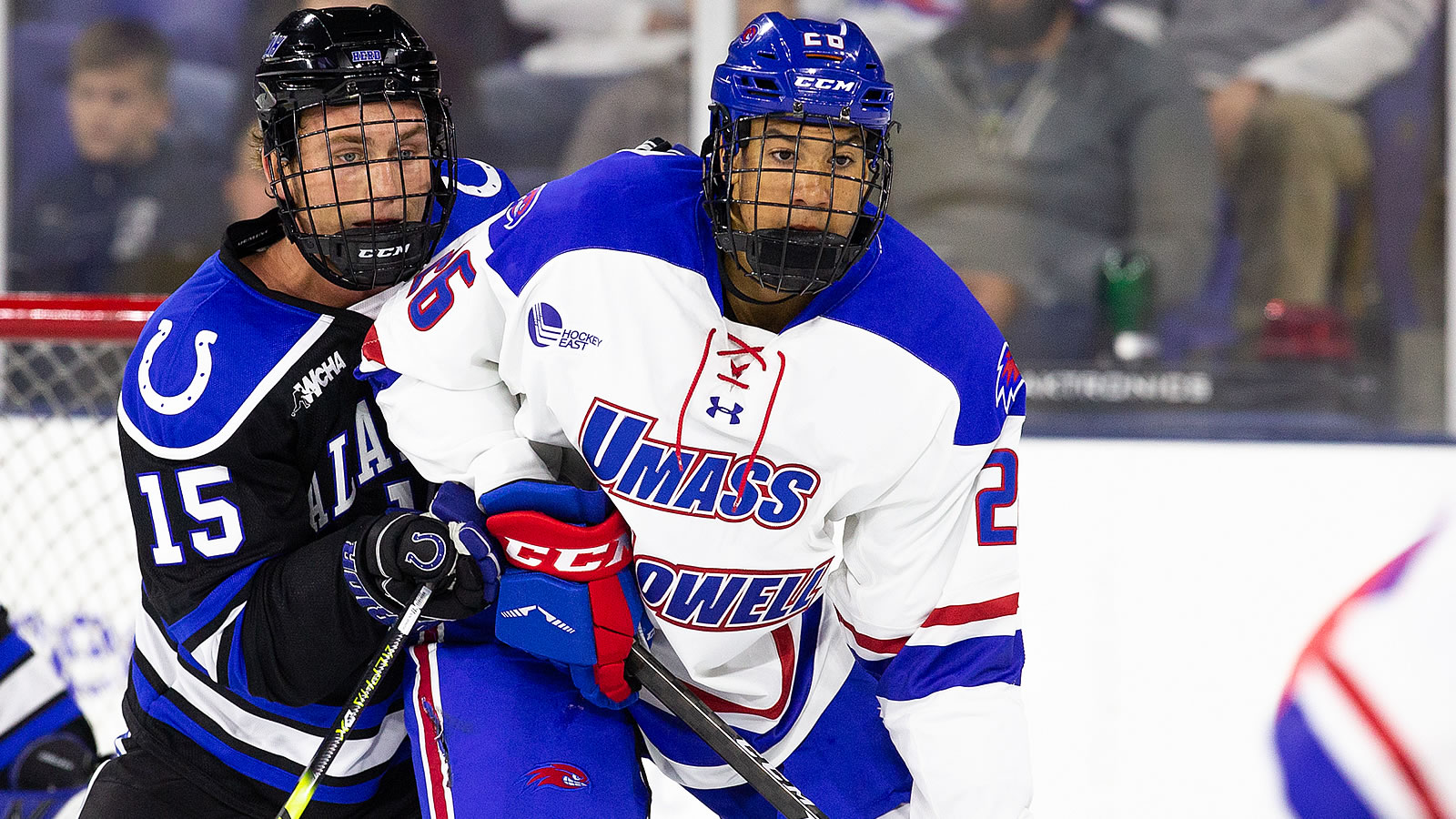 Tonight's win marks the River Hawks' second consecutive win over ranked opponents after taking down No. 17 Northeastern on Friday night. In total, UMass Lowell has four ranked wins under its belt so far this season. Additionally, the River Hawks' two weekend sweeps have been against nationally ranked opponents, with the first coming against then-No. 19 Boston University.

"I thought it was a well-played hockey game. I thought both teams competed extremely hard. It had some playoff feel to it," remarked Head Coach Norm Bazin. "The ice was tough to navigate out there tonight. You had to earn it. I was excited about the result, no question."

Lee's two-goal outing marks the second multi-point game of his junior campaign. Joining Lee in the scoring column, sophomore Ben Meehan (Walpole, Mass.), junior Carl Berglund (Hammaro, Sweden) and graduate student Nick Austin (St. Louis Park, Minn.) finished with two-point performances of their own. Meehan and Berglund both tallied a goal and assist each, while Austin dished out a pair of assists.

Between the pipes, junior Owen Savory (Cambridge, Ontario) finished the night with 24 saves and just two goals allowed to continue his 5-1-0 undefeated streak.

"I thought we needed an experience like this where we have the lead, we give it up and we have to grind for a win. So, we're pleased with the outcome. I thought all four lines contributed tonight and the powerplay chipped in, so those were positives," commented Bazin.

The River Hawks dominated the attack through the first 20 minutes of action, outshooting the visiting Eagles, 15-4. Impressive faceoff control kept UMass Lowell in the BC zone throughout the period, with the home squad taking a 13-4 margin at the dot.

UMass Lowell's offensive control paid off late in the first when Lee ended the scoring drought at the 14:56 mark. Grabbing the puck off the faceoff, Austin sent a clean pass to Meehan, who fired it in from just under the blueline. Sitting in front of the net, Lee tipped in the puck just under the right pad of BC's Eric Dop to end the first up 1-0.

A call against the Eagles sent UMass Lowell to the power play at the 5:02 mark in the second period, sparking their second goal-scoring opportunity of the night. A redirected pass from freshman Matt Crasa (South Setauket, N.Y.) shot out to the right goal line to an approaching Meehan. From behind the net, the defenseman sent in the low-angle shot behind the left skate of Dop to move the River Hawks to a 2-0 margin.

Quick strikes from BC late in the second halted UMass Lowell's scoring momentum. After a scrum in front of the home goal, the Eagles sliced the lead in half at the 12:38 mark after a lengthy review. Moments later, an extra-man chance in the slot from Marc McLaughlin locked the game a 2-2 heading into the final frame.

The stalemate was short-lived, however, as Lee got his stick on the puck once again just 5:48 into the third period. Winning the faceoff handily, Berglund sent the puck back to junior Jordan Schulting (Penticton, B.C.). Driving from the left point, Schulting's long-range shot was deflected out front by Lee over the glove-hand of Dop to regain the lead.

Nearly five minutes later, Berglund registered his own goal on a power play opportunity. A quick pass to the slot from junior Ryan Brushett (Montreal, Quebec) put the puck on Berglund's stick for a quick tip to beat BC's netminder blocker side and secure the 4-2 win at home.

Continuing conference action, UMass Lowell readies for a home-and-home against UConn next weekend, Nov. 20-21. Puck drop for both games is set for 3:35 p.m.