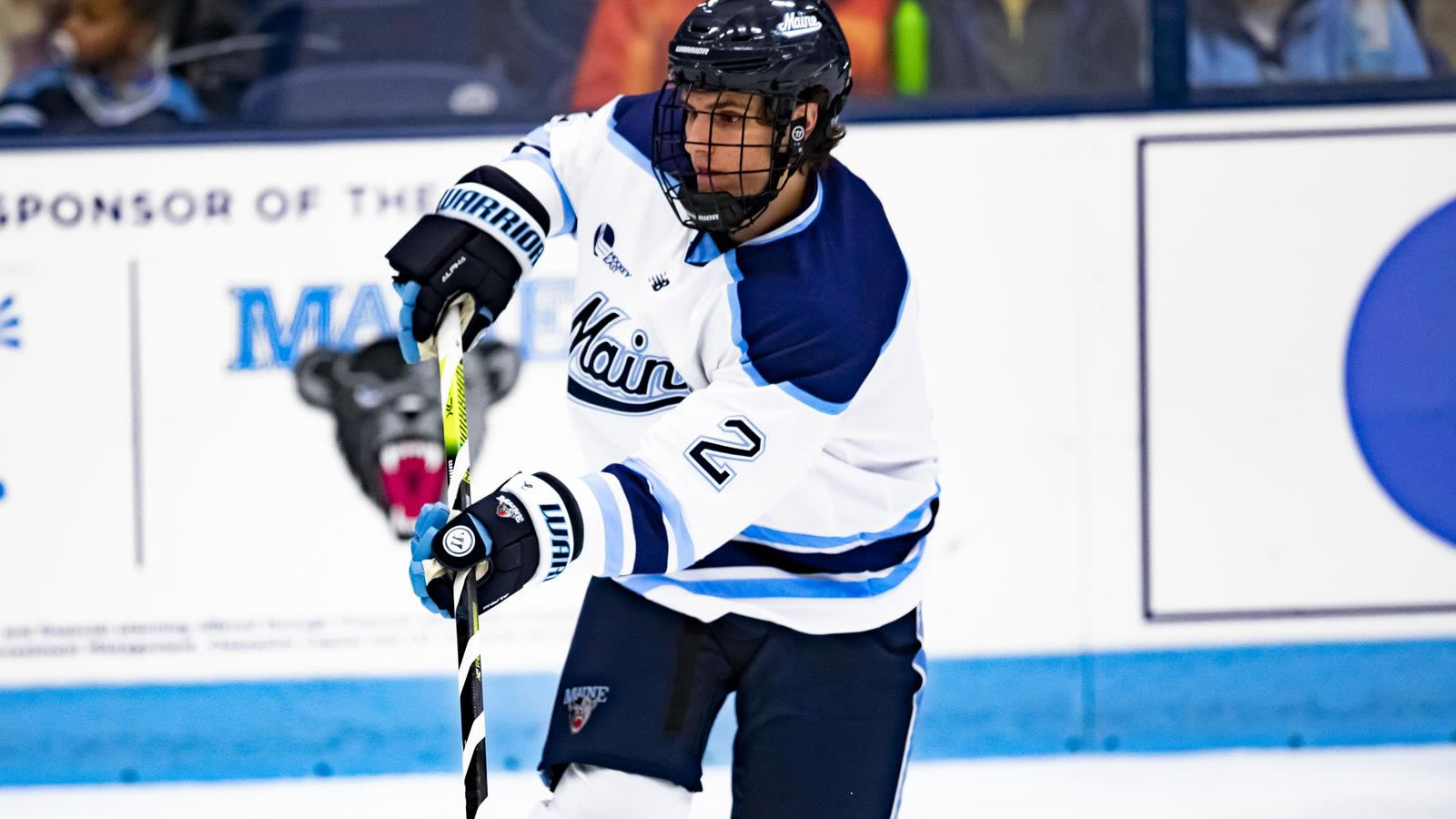 ORONO, Maine -- The University of Maine men's ice hockey team defeated the Merrimack College Warriors, 6-5 in overtime, on Friday evening in Alfond Arena. The victory was the first of Coach Ben Barr's career.

First Goal (1-0 Merrimack): 00:52 into the contest, the Warriors grabbed a 1-0 lead. Alex Jefferies fired a shot off the post before collecting his own rebound. The forward followed with another shot, this time deflecting off Victor Ostman and into the net.

Second Goal (2-0 Merrimack): Two minutes later, Filip Karlsson-Tagtstrom added another for his squad. Zach Uens took a shot from the blue line. With traffic in front of the Maine net, Karlsson-Tagtstrom tipped home the incoming puck. At the 2:58 mark of the first period, Maine trailed by two.

Third Goal (2-1 Merrimack): Jakub Sirota cut the Warriors' lead in half with his second goal of the season. Jacob Schmidt-Svejstrup forced a turnover in the neutral zone. The senior forward made his way through the Merrimack defense before dishing the puck off to Sirota. The Black Bears scored the third goal of the first period eight minutes into the Friday night bout.

Fourth Goal (3-1 Merrimack): In the dwindling seconds of the opening period, Max Newton tipped another puck into the Maine net. Two of Merrimack's three goals came by way of the deflection. At the end of 20:00 minutes, the Black Bears trailed by two goals.

Fifth Goal (3-2 Merrimack): The Maine power play found its stride in the second period. Ben Poisson ripped a wicked wrister from the far dot. Grant Hebert, perfectly positioned, cleaned up the rebound and pulled the Black Bears to within one goal.

Sixth Goal (3-3): Maine once again capitalized on the power play. This time Lynden Breen did the work. After receiving the puck from Poisson, Breen waited patiently for an opening. Once the sophomore found something he liked, the New Brunswick native tied the Hockey East game at three goals apiece.

Seventh Goal (4-3 Maine): After a lengthy review, the Black Bears' third goal of the period and fourth goal of the night was upheld. Cameron Spicer dumped a puck on net that was originally saved. Jacob Schmidt-Svejstrup crashed the net with every ounce of strength he possessed. The senior forced the puck through the Warriors' netminder and into the net for Maine's first lead of the night.

Eighth Goal (4-4): Merrimack tied the game 00:31 into the third period. Max Newton's second of the night came on a 5-on-4 advantage for the Warriors.

Ninth Goal (5-4 Merrimack): With just over three minutes remaining in regulation, Filip Forsmark found a go ahead goal. Liam Walsh won the face-off back to Forsmark who did the rest. The lead was short-lived.

Tenth Goal (5-5): With an empty net behind him, Sirota scored his second goal of the evening. This time the defenseman sent the high scoring affair to overtime. Nolan Renwick left the puck for the senior who calmly scored the game tying tally.

Eleventh Goal (6-5 Maine): David Breazeale scored his first career goal in the final seconds of the five minute overtime period. Lynden Breen played the puck ahead to Breazeale with no defenders in sight. The freshman defender made a move that froze Merrimack's goaltender. With 41.8 seconds left in overtime, the Black Bears defeated the Warriors 6-5.

- Maine went 2 for 3 on their power play opportunities, as the Warriors were 1-2 on its player advantages.

- The Black Bears blocked five shots and won 28 face-offs as a team.