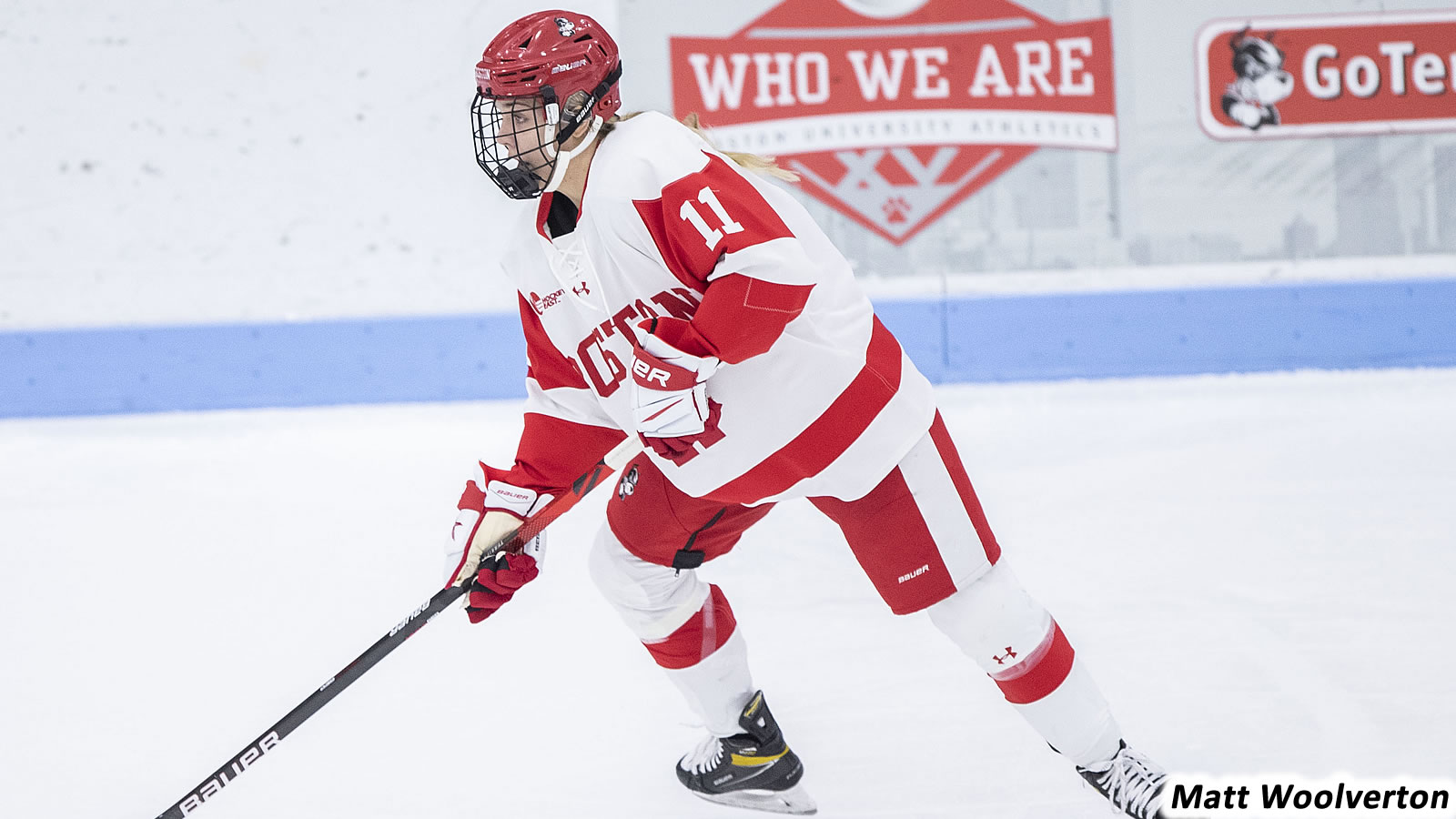 Senior Mackenna Parker tied the game and added a late-empty netter while sophomore Catherine Foulem provided the game-winning tally, which came just three minutes after Parker's equalizer. Freshman Callie Shanahan made 23 saves in goal and kept Holy Cross off the board for the final 47 minutes of the contest.

The win snapped a three-game skid for the Terriers and earned them a home-and-home split with the Crusaders following a 2-0 loss in Worcester on Thursday. BU now stands at 6-4-3 overall and 5-3-3 in Hockey East play.

- The Crusaders recorded 13 of their 27 shots in the opening period and used one of them to take a 1-0 lead.

- Following a breakout pass by Emilie Fortunato, Darci Johal passed back and forth with Lilly Feeney on the rush before Johal deposited a shot from the right slot at the 12:06 mark to open the scoring.

- BU had a power-play chance later in the first and then had another that stretched into the second but was unable to erase the deficit before either intermission.

- The visitors had two opportunities to increase their lead with the player advantage in the middle stanza and the Terriers were up to the task each time, starting a string of strong special teams play that would ultimately lead to a victory.

- Both teams recorded seven shots in the second and the Crusaders continued their 1-0 lead into the third.

- The Terriers were awarded a power play at 2:53 of the final period and needed just four seconds to capitalize on it.

- A faceoff win by senior Courtney Correia went right to Ellie Larson at the left point, where the graduate student sent the puck towards the net and connected with Parker, who tucked it glove-side against Holy Cross netminder Madison Beck to make it a 1-1 affair.

- It was rinse, wash and repeat for the Terriers soon after as a body-checking penalty at the 5:47 mark once again put the BU power play on the ice.

- Some strong puck movement led to a chance in the slot for Foulem, who snuck the puck inside the left post on assists from junior Julia Nearis and sophomore Andi Calderone for the go-ahead goal at the 6-minute mark.

- BU's penalty kill was put to the test once more with 12:45 to play but the Crusaders could not muster a shot on goal during their power-play chance.

- Parker put the finishing touches on the win when she raced to collect a clearing pass from senior Emma Wuthtich and scored on an empty net with 30 seconds left in regulation.

- This was the fifth two-goal game of Parker's career and the first since Jan. 17, 2020, which was also against Holy Cross.

- Shanahan made 12 of her 23 saves in the opening period en route to her third win of the season.

- Beck turned in a 25-save effort for the Crusaders.

- Parker's first goal ended a 164:55 scoreless streak for the Terriers.

- BU will return to action next Friday (Nov. 19) when it visits Maine in the first meeting of the season between the teams.