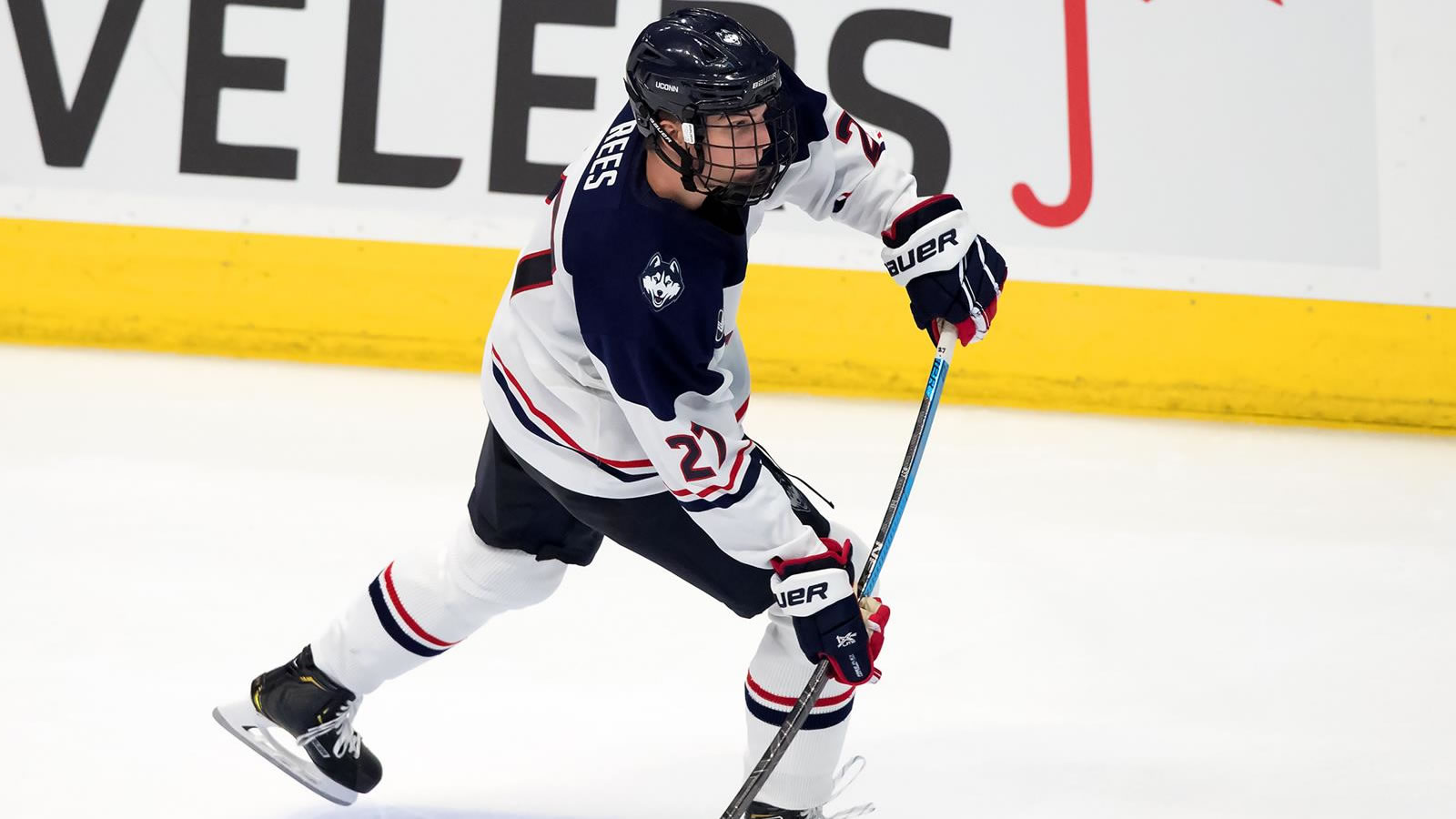 ORONO, Me. - UConn junior Harrison Rees (Oakville, Ontario) scored twice including the game-winner with 21 seconds left in overtime to deliver the Huskies a 3-2 win on the road at Maine, sweeping the Black Bears on the weekend at Alfond Arena.

The Huskies notch their fourth-straight win and take five of six points on the weekend from Maine. UConn improves to 6-3-0 overall, their best start to a season since a 6-2-1 start to the 1999 season. The Huskies are now 4-1-0 in Hockey East, their best-ever start to league play.

After a scoreless third, the Huskies won it in overtime. UConn held a 44-25 edge on shots and grad student Darion Hanson (East Bethel, Minn.) made 23 saves to get the win.

UConn struck for a late goal to take a 1-0 lead into the first break. Coming just as their second power play ended, sophomore Hudson Schandor (North Vancouver, British Columbia) was able to hold possession in the Maine zone and feed Tverberg on the right side. Tverberg deked a defensemen to walk into the slot area and whip a shot through traffic for his seventh goal of the season at the 19:00 mark.

The second got underway with a flurry of action as the teams scored three times in the first 4:07. Maine struck first to tie the game just 1:27 in as Houle got his first of two in the period. Breaking out of the neutral zone, Keenan Suthers fed Houle on the right wing and he snapped one home from the circle to tie it up at 1-1.

UConn answered right back at 3:30 on Rees' first of the season. Senior Marc Gatcomb (Woburn, Mass.) carried the puck into the right corner and dished back to Rees in the slot who fired one off a Maine defender and past Ostman for a 2-1 lead.

Houle had the answer for the Black Bears at 4:03. Coming off a rush into the zone, John Mulera sent a cross ice pass to Houle on the right side who one-timed it home for his second of the night to make it 2-2.

The two teams skated to a scoreless third period

The Huskies had two breakaway chances in the overtime before Rees' game-winner. On their final push, Schandor fed Gatcomb curling to the front and Ostman got the stop but Rees was there to clean up the rebound for the win.

After their season long seven-game road trip the Huskies will return home to the XL Center on Friday, November 12 to play host to Boston College at 7:05 pm.