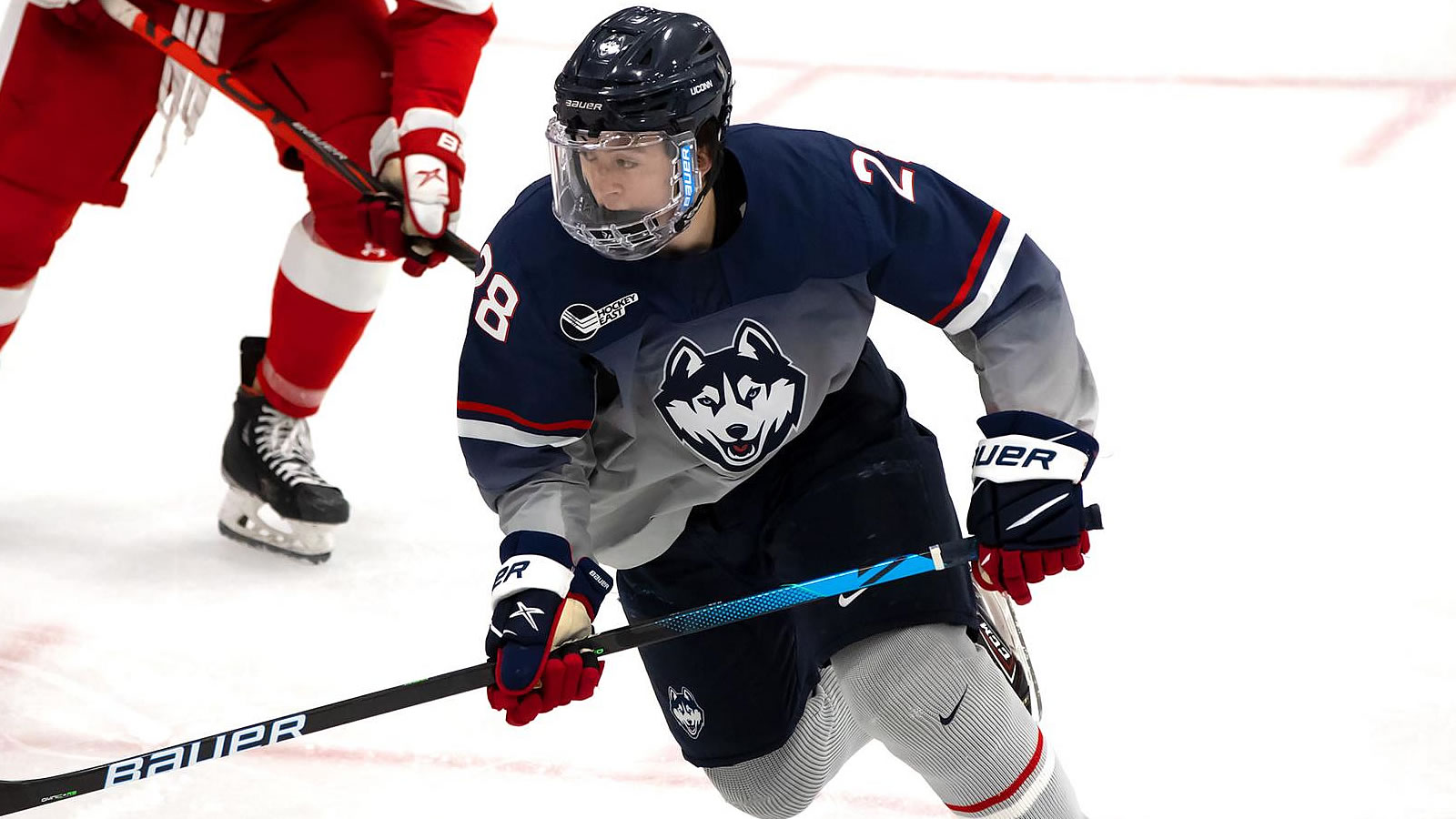 ORONO, MAINE. - UConn sophomore Ryan Tverberg (Richmond Hill, Ontario) scored a pair of goals and added an assist while senior Jachym Kondelik (Budejovic, Czech Republic) provided the game-winner in the third period to lead the Huskies to a 4-3 win at Maine in Alfond Arena Friday night.

After falling behind 1-0 in the first period, UConn scored three in the second, two from Tverberg, to take a 3-2 lead into the final stanza. Maine tied the game up right off the opening face-off to the third period, as Jakub Sirota made it 3-3 just six seconds in.

UConn got their fourth power play chance at 12:31 and needed just 14 seconds to capitalize for the game-winner. Tverberg fed the puck to Kondelik set up in front of the net and he stuffed in his third of the season for a 4-3 lead.

The Huskies held a 36-30 edge on shots and grad student Darion Hanson (East Bethel, Minn.) made 27 saves to earn his fifth win on the season. Maine goaltender Matthew Thiessen stopped 32 shots in taking the loss.

The Black Bears were 0-for-2 on the power play but got the game's first goal at the 16:25 mark. Keenan Suthers carried into the zone up the right wing and stopped to feed an oncoming Bisson on the left wing who buried a snapshot for a 1-0 lead, his second goal of the season.

UConn tied the game up at 1-1 on their third power play chance of the night. Sophomore Nick Capone (East Haven, Conn.) cycled the puck to Firstov at the point and he blasted a shot through traffic in front of Thiessen for his fifth of the season.

The Huskies grabbed a 2-1 lead at 11:27 on Tverberg's first of the night. Sophomore Hudson Schandor carried into the zone and fed freshman Chase Bradley (St. Louis, Mo.) on the left wing. Bradley one-timed the puck cross ice to Tverberg sitting alone at the right post and he tucked it in for his fifth.

Just as a power play came to an end for the Black Bears they found the tying goal. David Breazeale was able to find Grant Hebert all alone in the low right circle for an easy goal on the open net to make it 2-2 at 16:41.

UConn needed just 28 seconds to take the lead back coming off a turnover and a rush on net. Firstov tried to set up Artem Shlaine (Moscow, Russia) for a one-timer but the puck deflected off his stick and found a crashing Tverberg in front for his second of the night and a 3-1 lead at 17:09.

Off the opening face-off of the final period the Black Bears caught a break with a crazy goal just six seconds in. Sirota looked to be throwing the puck in deep but firing on net caught Hanson off guard and beat the goaltender from just outside the blue line to make it 3-3.

UConn got their final power play chance at 12:31 and made it count. Wasting little time, the Huskies got the game-winner just 14 seconds into the extra skater chance. Tverberg came down the right side and fed the puck to Kondelik parked in front of the net and the senior stuffed his shot home for the 4-3 edge.

The Huskies and Black Bears will close out their weekend series Saturday night at 7 pm at Alfond Arena.