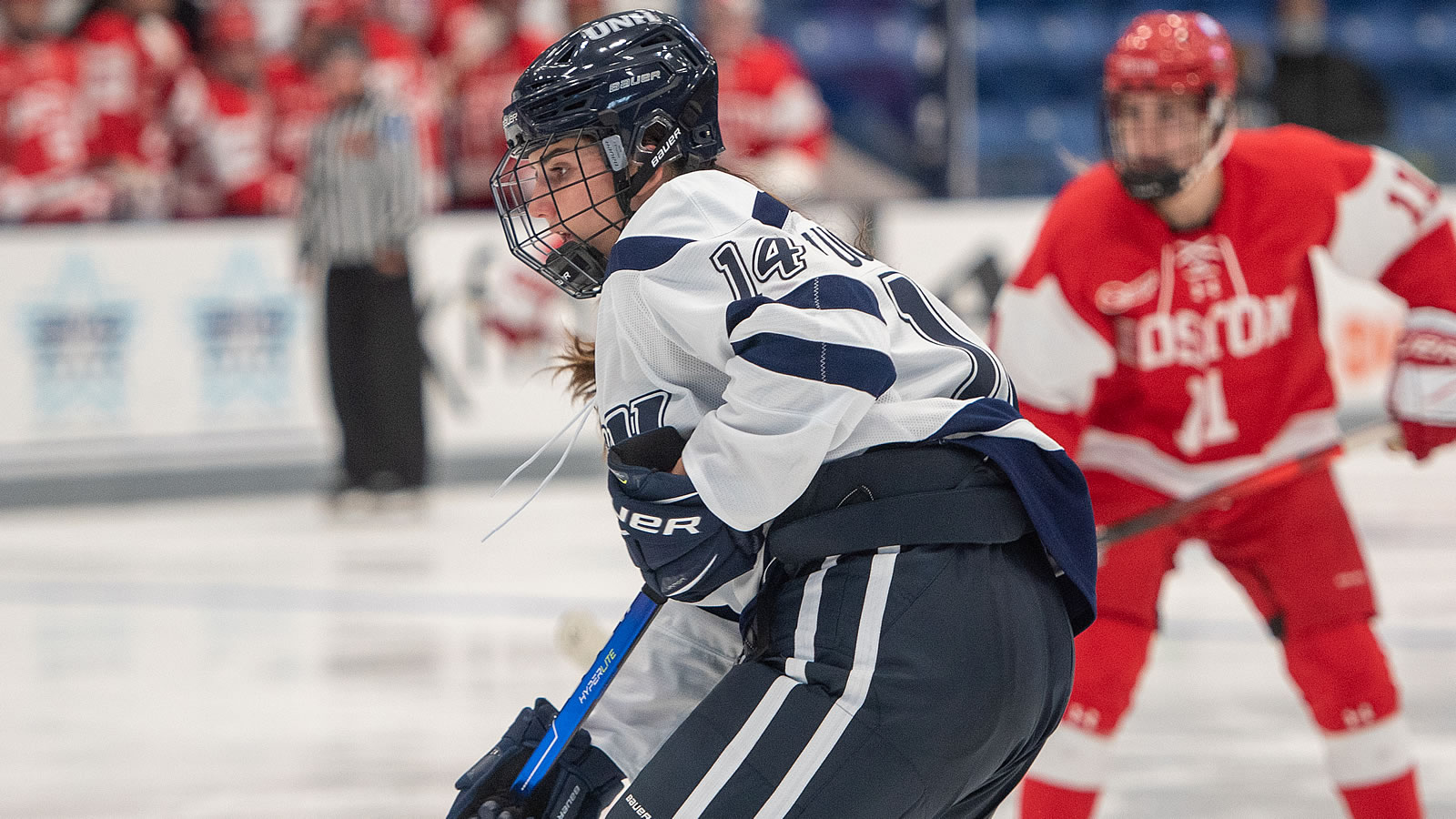 Senior goalie and captain Ava Boutilier (Charlottetown, Prince Edward Island) made eight of her 17 saves in the third period. Holy Cross counterpart Madison Beck was credited with 33 saves, including 16 in the first period.

- UNH recorded an 18-7 shot advantage as the teams skated to a 2-2 tie through 20 minutes that saw the Crusaders take a pair of one-goal leads.

- Holy Cross converted an early power play into a 1-0 lead on Bryn Saarela's goal at 2:08.

- The Wildcats had a quick response, however, to tie the game 65 seconds later. Senior Lindsey Dumond (Hampton, N.H.) centered the puck from the left boards and Rynne turned and fired off the crossbar into the cage at 3:13. Sophomore Charli Kettyle (Perth, Ontario), with the outlet pass from the defensive zone to Rynne, was credited with the secondary assist.

- UNH once again pulled even at 16:58 when Thiérus scored off a rebound in front of the net. The scoring sequence began in the right circle, where sophomore Brianna Brooks (Whitby, Ontario) centered the puck to Juodikis. She lifted a backhander that was stopped by Beck, but Thiérus was there to deposit the rebound.

- UNH recorded a 10-4 shot advantage in the scoreless second stanza.

- Thiérus intercepted a pass at UNH's defensive blue line to create a 2-on-1 rush. She swung the puck to the right circle for Juodikis and received the return pass down the slot. Thiérus' shot from the low slot was stopped by Beck, but Juodikis, who had skated to the top of the crease, chipped the puck into the open net to give UNH its first lead of the game, 3-2, at 3:08.

- Holy Cross generated a 3-on-1 rush in the sixth minute. Darci Johal skated the puck into the left circle and her shot was stopped by Boutilier.

- The Crusaders pulled Beck in favor of an extra skater with 2:06 remaining. UNH won the ensuing faceoff, however, and senior Emily Rickwood (Brantford, Ontario) cleared the puck to the neutral zone, where Juodikis gained possession and advanced into the left circle. Her centering pass connected with Thiérus, who deposited the puck into the open net to extend the lead to 4-2 at 18:05.

- Holy Cross was whistled for tripping during that play and was shorthanded the remainder of the game.

- The Wildcats were o-for-4 on the power play and 1-for-2 on the penalty kill.

- Holy Cross had the slightest of edges, 24-23, in the faceoff circle.

- All three members of the Thiérus, Brooks and Juodikis line extended their point streak to five games.

- Thiérus, who also recorded an assist each of the last five games, has nine points (three goals, six assists) during the streak.

- Juodikis, who has also scored a goal in three straight, has four goals and three assists for a total of seven points during the point streak.

- Brooks, who also has a three-game assist streak, has seven points (three goals, four assists) during the five-game point streak.