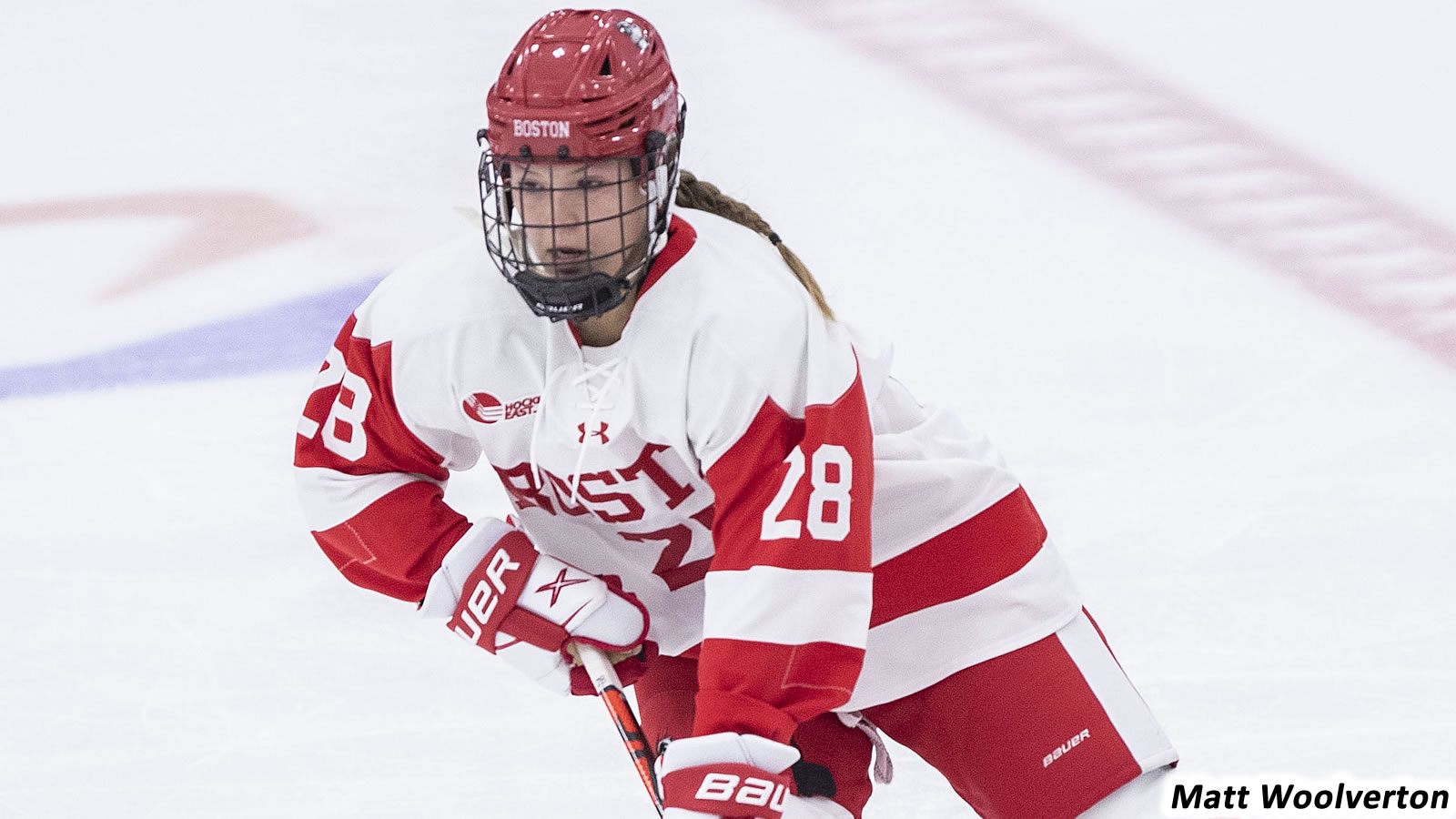 Sophomore Catherine Foulem gave BU (5-1-3, 4-0-3 HE) a 1-0 lead early in the first period and then assisted on freshman Christina Vote's strike with 7.8 seconds to play in the stanza. Sophomore Clare O'Leary secured her first career two-assist game, including the primary helper on Vote's winner.

Senior Kate Stuart made 28 saves in a terrific performance between the pipes. She improved to 3-0-3 with the victory while BU remained unbeaten in Hockey East play at 4-0-3.

- BU opened the scoring just 4:08 into the proceedings. O'Leary retrieved the puck in the corner and quickly fired it towards goal. It caromed off the goalie's stick and right to Foulem, who fired it over the glove of Sandra Abstreiter (25 saves) for her second goal of the season.

- Vote extended the lead to 2-0 with just 7.8 seconds remaining in the opening frame. Foulem passed the puck out of her own zone to O'Leary, who saw Vote sneak past the defense. Vote collected a pass from O'Leary and despite being slashed on the play was able to find the back of the net for her third marker of the campaign.

- Stuart kept the Terriers ahead by two with a pair of terrific stops. The Friars' leading goal scorer, Hayley Lunny, skated in on a breakaway and had her first attempt denied by Stuart. Lunny then attempted a turnaround shot, but Stuart got a skate to the puck and kept it out.

- BU came up with a successful penalty kill shortly after the Friars scored to stay in front.

- The Friars forced BU into a long defensive-zone shift late in the period, but Stuart bailed her teammates out with some important saves to keep the one-goal advantage intact.

- Providence pulled Abstreiter with 1:03 remaining in regulation, but Stuart stood tall again, hugging the post and denying a close-range attempt with 30.5 ticks on the clock in the Friars' last real chance of the contest.

- Foulem has lit the lamp in two of the last three games.

- This was Foulem's second multi-point effort of her Terrier career; she tallied two assists at Boston College on Feb. 19, 2021.

- O'Leary last had two points on Dec. 5, 2020 when she notched a goal and an assist at New Hampshire.

- Stuart has allowed just one goal in each of her last three starts.

- She owns a 0.97 goals-against average and a .962 save percentage in those three games.

- The Terriers have gone 11-for-11 on the PK over their last three games.

- BU will face UConn in a home-and-home series that begins Friday, Nov. 5, in Storrs, Connecticut.