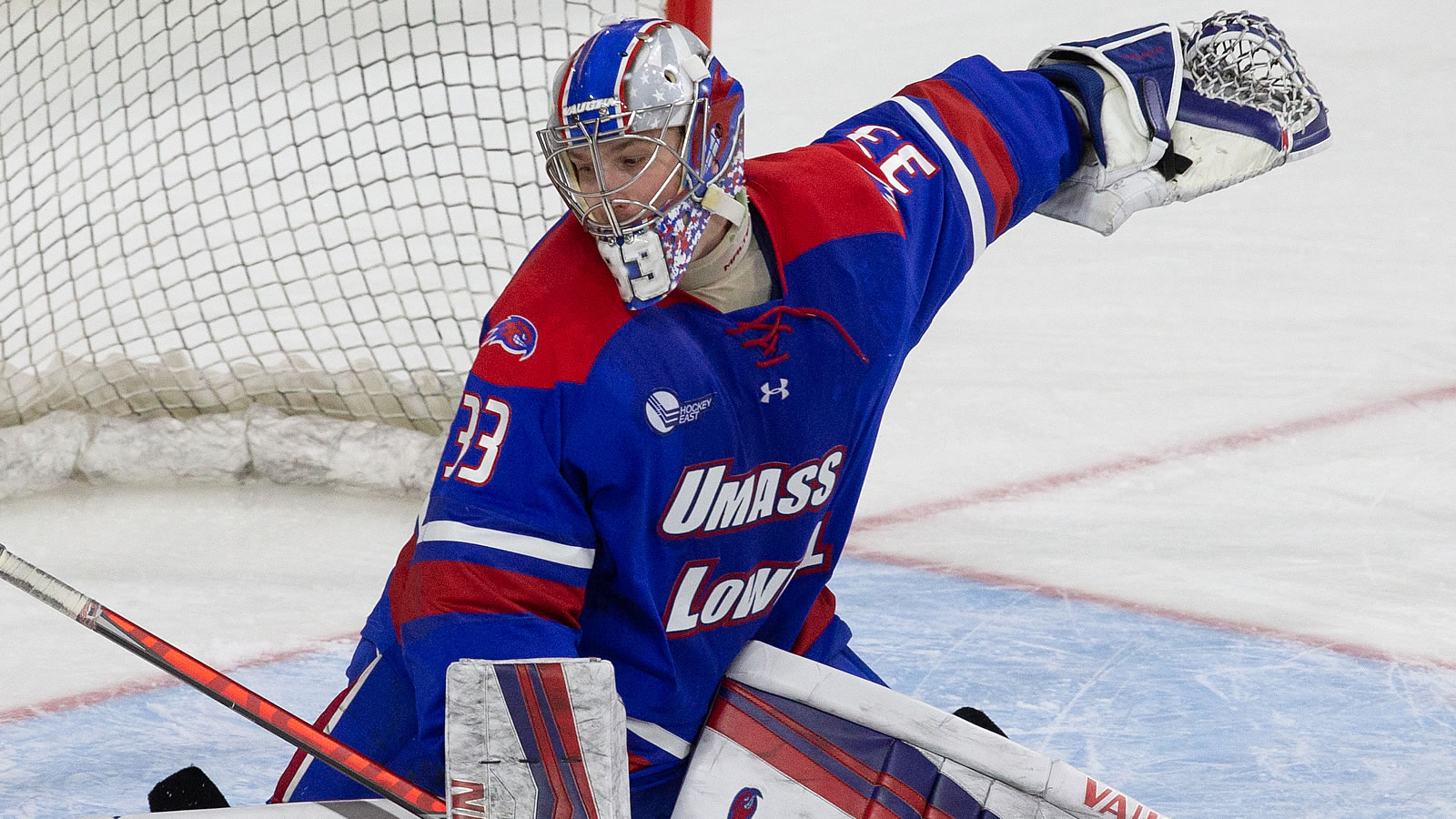 Condotta led the team with three points off a goal and a pair of assists, while Armstrong-Kingkade registered the first multi-point and multi-goal game of his career. Between the pipes, sophomore Henry Welsch (Lakeville, Minn.) was a force for the River Hawks. The second-year goalie stopped 27 shots en route to his first career shutout in just 14 appearances.

UMass Lowell's penalty kill unit had an exemplary showing in the 4-0 blanking. Facing six Michigan State power plays across 60 minutes, the River Hawks kept the Spartans scoreless on the extra-man opportunity while tallying an extra-man goal and shorthanded goal on the way to victory.

Starting things off strong for the home crowd, UMass Lowell earned its first goal of the night on its first power play opportunity. Passing the puck around the perimeter, junior Carl Berglund (Hammaro, Sweden) fired in a shot from the top of the circle over the right pad of Michigan State's Pierce Charleson to get the River Hawks on the board just 8:50 into the tilt.

The Spartans continued to pressure the River Hawks throughout the remainder of the first, sending nine shots towards the net to UMass Lowell's six. A strong defensive presence coupled with a 13-6 faceoff advantage for the River Hawks sent the home squad into the first intermission holding on to the 1-0 margin.

An early series of scuffles to open the second period sent UMass Lowell to the 5-on-3 advantage. Although Michigan State squelched the River Hawk extra-man opportunity, success still favored the home team. As the Spartans returned to full-strength, junior Ryan Brushett (Montreal, Quebec) ricocheted a shot off the pipe. Condotta was quick to pick up the rebound in front of the net, backhanding the puck past the off-centered goalie for the 2-0 lead.

Minutes later, the River Hawks found themselves on the penalty kill. Sending the puck out of the zone, Armstrong-Kingkade went head-to-head with Michigan State's David Gucciardi down the stretch. Beating him in the foot race, Armstrong-Kingkade dangled the puck in front of Charleson and waited for the goaltender to lose his balance. The sophomore then beat him glove side on the shot to send the River Hawks into the final 20 up 3-0.

Armstrong-Kingkade closed out the win with his second of the night just 8:43 into the third period. Sophomore Ben Meehan (Walpole, Mass.) sent the puck off the boards behind the Michigan State goal to Condotta, who saw Armstrong-Kingkade waiting in front of the net. Sending a quick pass to the sophomore, Armstrong-Kingkade flicked the puck over the blocker of Charleson to secure the 4-0 decision at home.

The River Hawks return to action next weekend for a home-and-home series against Hockey East opponent Boston University, Oct. 29-30.