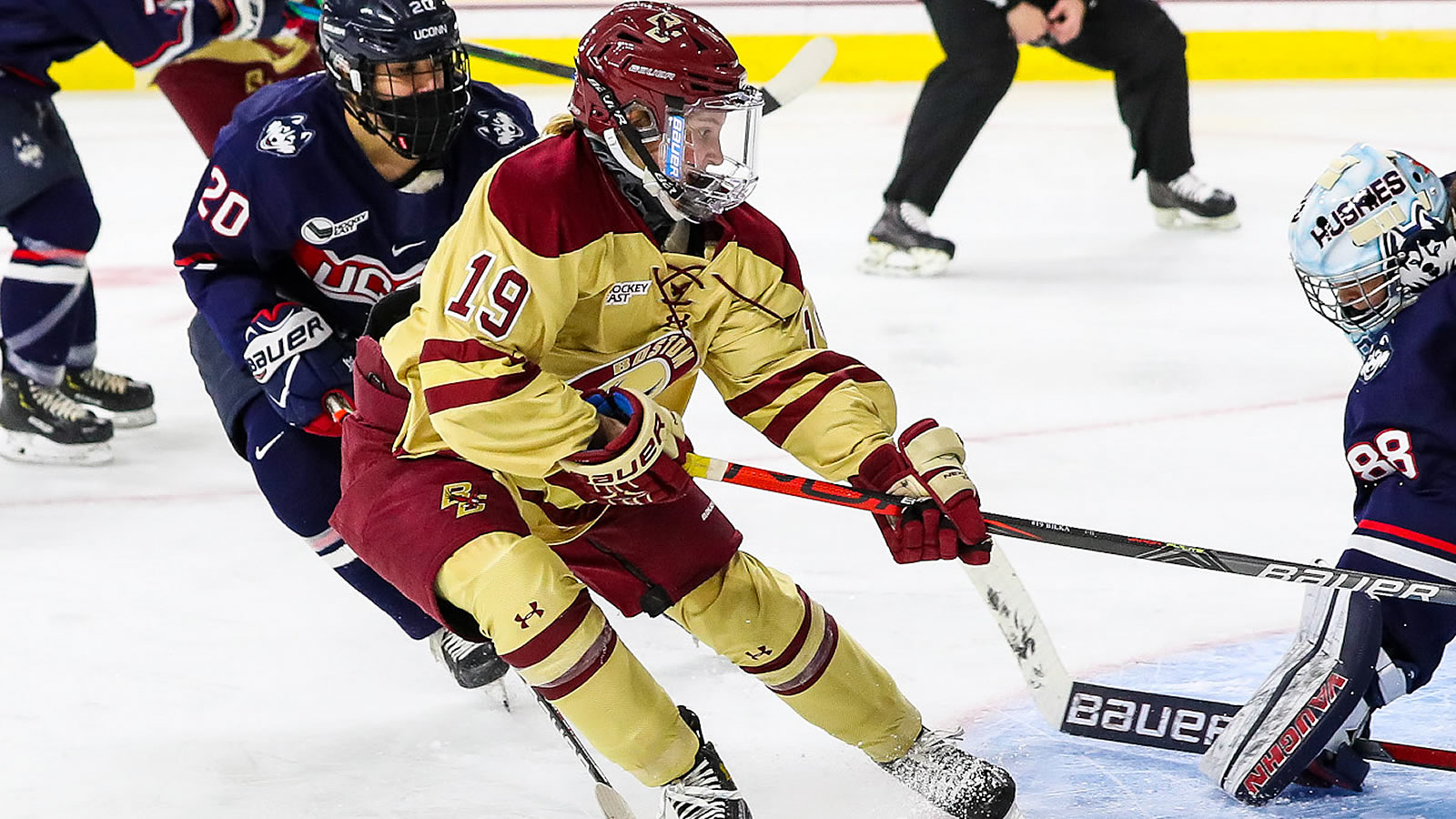 CHESTNUT HILL, Mass. - Hannah Bilka scored two goals and added an assist while Abby Newhook had a goal and an assist as the No. 4/5 Boston College women's hockey team earned a 5-2 win over the University of Maine.

The Eagles scored four goals in the first period to jump out to a 4-0 lead at the first break. Maine scored once in the second and early in the third, but Bilka's second goal of the afternoon finished the scoring at 5-2.

Nine total Eagles finished with points, including goaltender Abigail Levy with an assist.

1st, 5:02 | 1-0, BC GOAL: Hannah Bilka toe-dragged the puck around a defender in the left circle and then slotted a pass to Abby Newhook for a one-timer at the top of the crease.

1st, 8:21 | 2-0, ME GOAL: Bilka carried the puck into the right circle and waited before taking a wrist shot that deflected off of a defender and inside the left post.

1st, 15:55 | 3-0, BC GOAL: Gaby Roy took a clearance pass from Jillian Fey alone in on Jorden Mattison and deked to her backhand for a high finish for the short-handed goal.

1st, 17:41 | 4-0, BC GOAL: Carrying the puck into the left circle, Caroline Goffredo took a wrist shot that Mattison saved but the rebound trickled over the goal line.

2nd, 13:11 | 4-1, ME GOAL: As Morgan Trimper came in to the zone, Abigail Levy poke checked the puck but it popped to Trimper for a falling finish at the right post.

3rd, 3:41 | 4-2, ME GOAL: Ida Press took a shot from the point and Ally Johnson tipped home the power-play goal at the top of the crease.

3rd, 9:08 | 5-2, BC GOAL: Bilka picked off a Maine pass in the neutral zone and skated into the offensive zone, beating Loryn Porter near-side with a wrist shot.

- Maine had the 37-34 lead in shots on goal ... the Black Bears went 1-for-4 on the power play while BC didn't have a power-play opportunity.

- Jillian Fey tied a career-best with two assists ... it was her third career multi-point game.

- The game marked the 100th career game for Fey.

- Nine total Eagles finished with at least one point.

- Abigail Levy finished with 35 saves for Boston College ... it is her fifth game this season of 30 or more saves.

- Levy earned an assist on the first goal of the game ... it was her third career assist and first since Oct. 25, 2019 (done while at Minnesota State).

- Keri Clougherty finished with a game-high four blocked shots ... the Eagles had 14 as a team.

Boston College will play a home-and-home series against Northeastern next weekend, facing off at Kelley Rink on Friday night and then at Matthews Arena on Saturday afternoon.