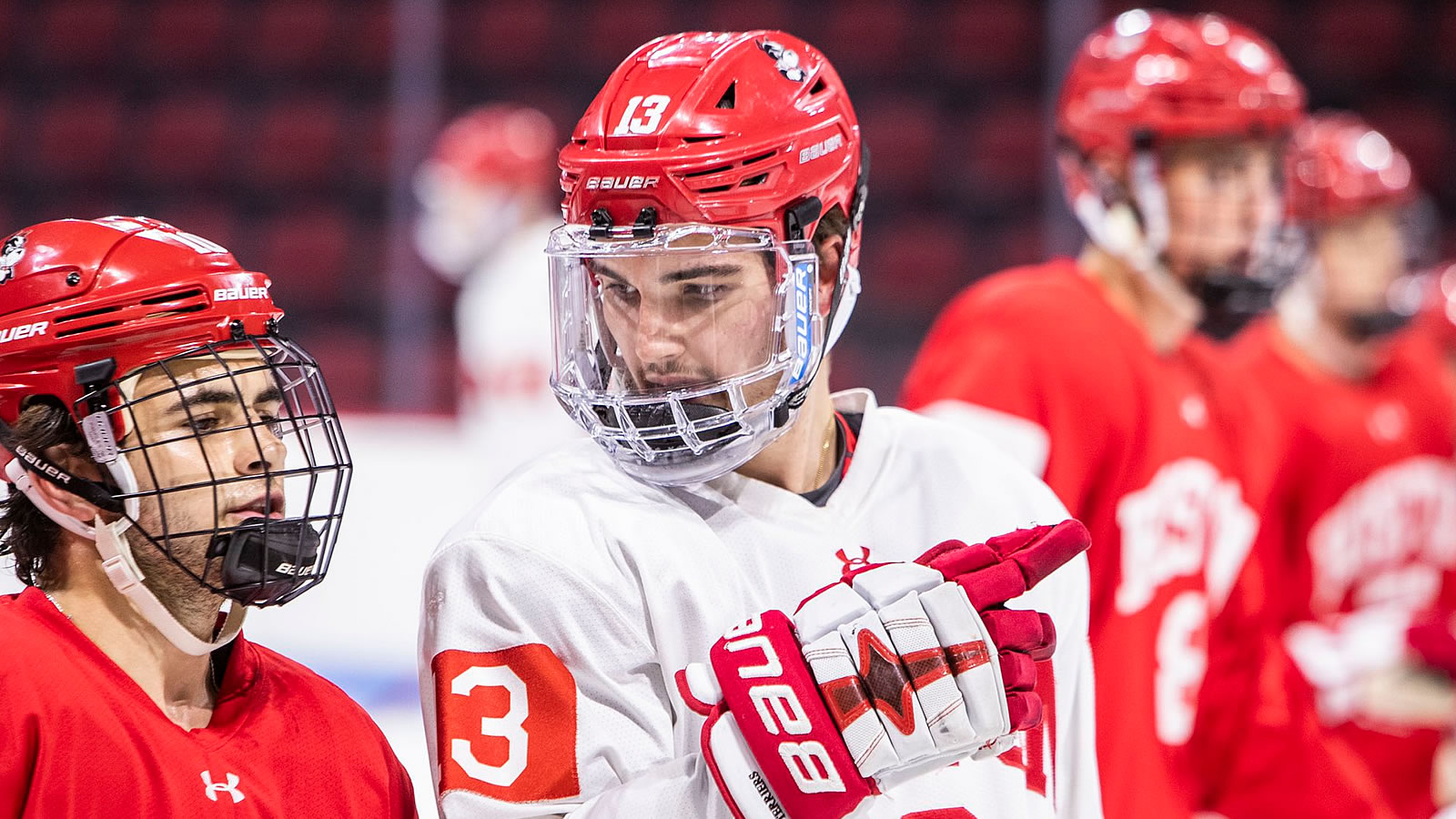 BU (3-3-0, 2-2-0 HE) never trailed, as senior Ty Amonte, who was playing in his first game at Agganis Arena since March 2, 2019 (also against Merrimack), opened the scoring just 2:22 into the contest. Merrimack (3-3-0, 1-2-0 HE) tied it at 1-1 just over a minute later on the first power play of the game. The Terriers followed that by reeling off four straight goals to take a lead they would not relinquish en route to earning a split of the weekend series with the Warriors.

Sophomore Nick Zabaneh tallied his first goal as a Terrier and added two assists for a career-high three points while freshman Ty Gallagher collected a trio of helpers in his first multi-point effort. Freshman Brian Carrabes also notched his first collegiate goal, which proved to be the game-winner.

- Amonte wasted no time getting on the score sheet, doing so just 2:22 into the proceedings. Boucher was able to get to a bouncing puck in the Merrimack zone and get it to Amonte in the slot, where he wristed home his first goal of the year.

- Merrimack evened the score just 1:07 later with a power-play strike.

- Peterson answered at 4:38 with his first of two goals in the opening frame. Zabaneh rushed up the right side, went below the goal line and backhanded a feed to Peterson in front of the net for the finish.

- Mastrosimone extended the lead to 3-1 at the 8:52 mark. Vlasic began the sequence by chipping the puck down the wall and into the offensive zone. Skoog won the race to the puck behind the net and quickly found Mastrosimone cutting to the crease. Mastrosimone one-timed the puck past Zachary Borgiel (two saves) for his third goal of the year.

- Peterson's shorthanded strike came at 11:51 of the first. He forced a turnover in his own zone and raced up the left wing before uncorking a shot that bounced off of Borgiel's mask and behind him for a goal.

- Skoog made it 5-1 at 8:15 of the second stanza. Campolieto got the puck in the BU zone and dished it ahead to Mastrosimone, who fired a diagonal outlet pass for Skoog. He entered the Warrior zone, got to the right faceoff circle and cut to the slot before firing a shot past Troy Kobryn (20 saves).

- The Warriors thought they got a goal back with 7:38 left in the second, but Commesso somehow kept it out, which video review confirmed.

- Zach Vinnell scored the first of his three goals of the night at 14:17 of the second stanza before Filip Forsmark added a second straight power-play marker to cut the Terriers' lead to 5-3 with 1:30 to go in the period.

- Peterson restored the three-goal advantage when he completed his hat trick. Zabaneh redirected a Vlasic shot on cage, and the rebound popped out to Peterson, who put it right back into the net.

- Declan Carlile made it a two-goal game again with a strike at 2:03 of the third, but Carrabes collected his first career goal just 21 seconds later. Gallagher stopped a Warrior rush in front of the visitors bench and then Carrabes chipped the puck past a defender before skating into the right circle and unleashing a wrist shot past Kobryn.

- Vinnell's second goal of the evening made it a 7-5 score halfway through the period.

- Zabaneh capped his career night with his first goal as a Terrier with 1:54 remaining in regulation. Armstrong hustled to a loose puck in the Warrior end, won the race and stopped on a dime, which allowed him to turn and find Zabaneh flying into the zone to join the play. Zabaneh collected the pass, weaved through the Merrimack defenders, got the goalie out of position and then lifted the puck into the wide-open net.

- Vinnell's hat trick cut the lead back to two with 1:07 to go, but the Warriors were unable to get any closer.

- Amonte made his season debut after missing all but the opening two tilts last year and the entire 2019-20 campaign.

- He has scored a goal in three of his last four games dating back to March 22, 2019, when he lit the lamp in the Hockey East semifinals against Northeastern.

- Peterson's hat trick was the first for a Terrier since Jay O'Brien tallied three goals at Vermont on Feb. 13, 2021.

- The Terriers' streak of 23 successful penalty kills in a row ended with Merrimack's first goal of the game; BU began the season 19-for-19 after ending last year 4-for-4.

- Seven of the eight Terrier goals were at even strength.

- BU will begin a home-and-home series with UMass Lowell on Friday night at Agganis Arena.