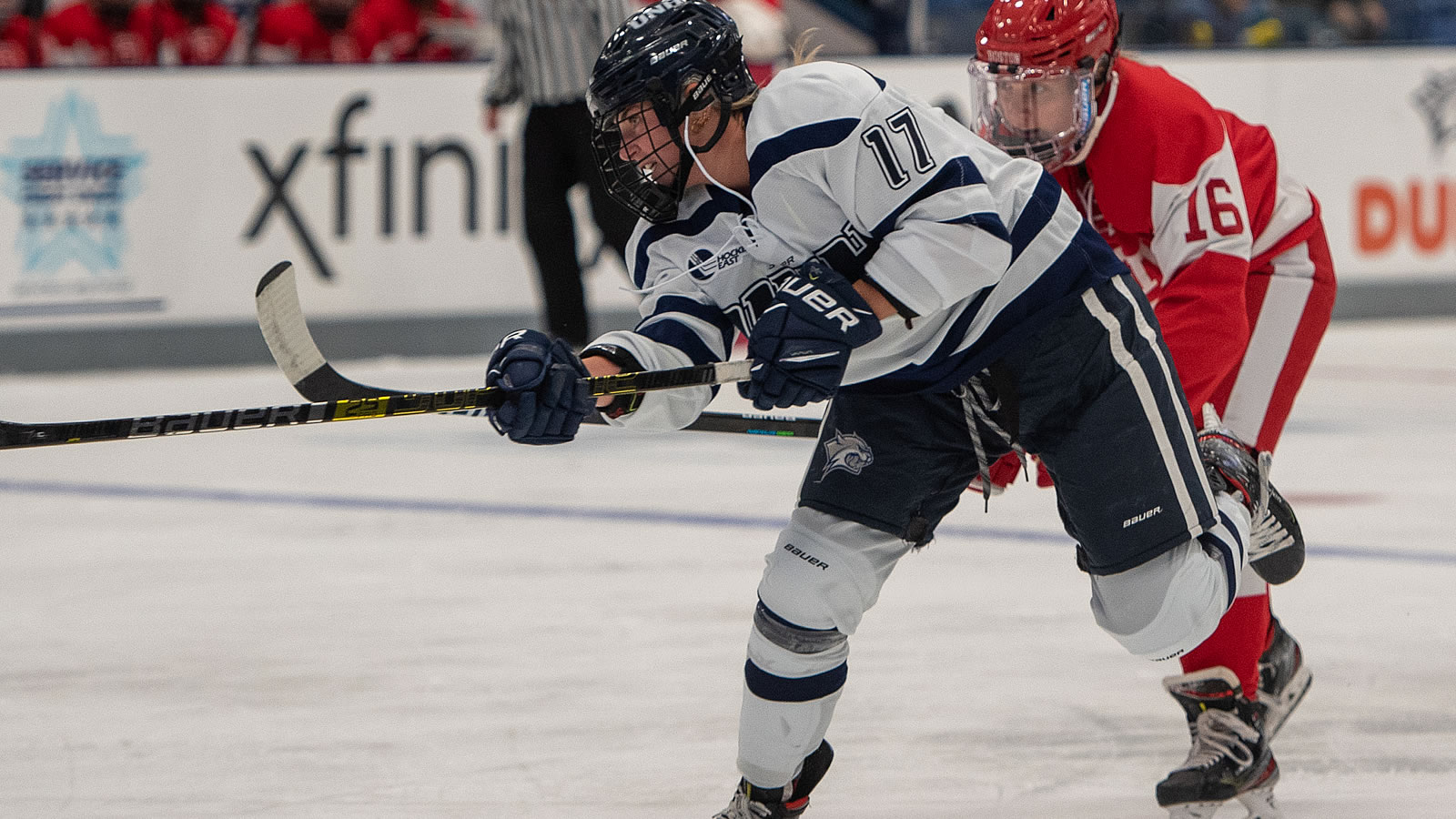 Senior captain Ava Boutilier (Charlottetown, Prince Edward Island) made 30 saves, including 12 in the third period, for a .968 save percentage.

- New Hampshire returns to action at home vs. College of the Holy Cross on Oct. 31. Start time at the Whitt is 2 p.m.

- Thiérus advanced through the neutral zone and right circle before leaving a drop pass for Rynne, who ripped a shot into the upper-left corner at 5:49.

- Brooks corralled Kettyle's flip pass at the blue line and hesitated in the left circle before snapping a centering pass to Juodikis, who shifted to the left and roofed a backhander for a 2-0 lead at 6:09.

- Maine responded with some pressure, but Boutilier denied both Ali Beltz and Alyssa Wruble in the eighth minute.

- UNH took a two-goal lead and 9-7 shot advantage into the first intermission.

- Porter made two saves in the opening 80 seconds of the second stanza to keep the margin at two goals.

- Brooks extended the lead to 3-0 at 8:49 when she one-timed Thiérus' centering pass from the right wing into the open net. Senior captain Maddie Truax (Gardner, Mass.) chipped the puck from the boards at center ice into the right circle to earn the secondary assist.

- Maine went on the first power play of the game at 9:57 and capitalized on the skater advantage to trim the deficit to 3-1 at 11:12. Ida Press' initial shot from the right point was saved by Boutilier, but Johnson shoved the rebound into the net from a scrum at the top of the crease.

- The Black Bears had a 12-9 shot advantage in the second period.

- Maine had 22 seconds of power play carry into the start of the final frame, but Boutilier denied Costa 17 seconds after the opening faceoff and then the 'Cats returned to full strength.

- The visitors went back on the power play at 7:41, and this time UNH's penalty kill did not allow a shot on goal to preserve the 3-1 lead.

- Maine pulled Porter in favor of an extra skater with 4:29 remaining.

- Boutilier stopped Courtney Calarullo's shot at 16:24, then the 'Cats blocked all three Maine shot attempts in the next 30 seconds.

- Kettyle blocked yet another shot attempt, gained possession in the right corner and sent the puck the length of the ice into the open net to give UNH a 4-1 lead at 17:45.

- Boutilier made two stops the rest of the way to send the game to a 4-1 final score.

- Maine finished the game with a 31-27 shot advantage.

- The Black Bears went 1-for-3 on the power play and were not whistled for a penalty.

- Brooks was strong on the draw for UNH with 13 wins on 20 faceoffs.

- All three members of the Thiérus, Brooks and Juodikis line extended their point streak to four games.

- Kettyle, who scored her first goal of the season, matched her career highs in goals, assists and points (two).

- Thiérus had a +4 plus/minus rating.

- The Black Bears had been unbeaten (4-0-1) the past four meetings and swept last season's two-game series at the Whitt.